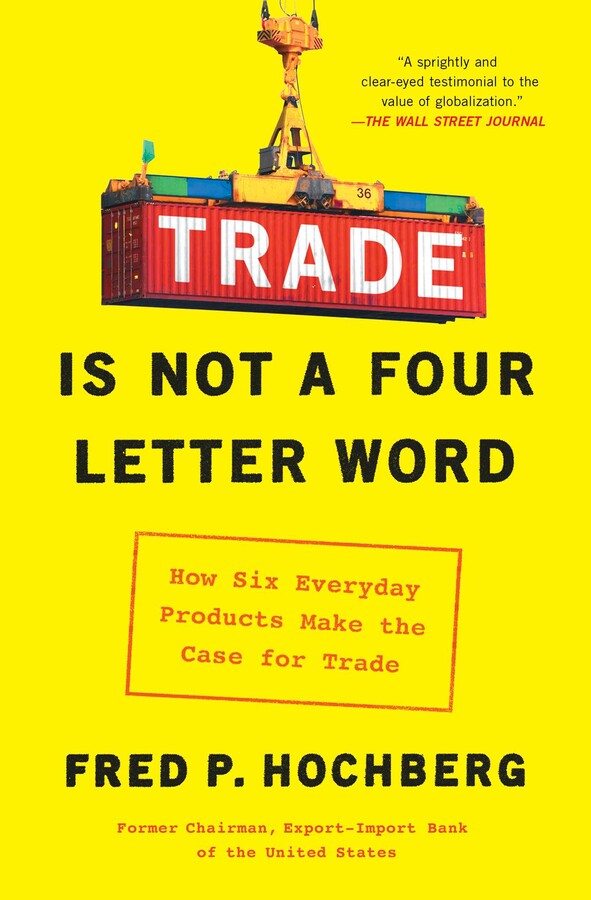 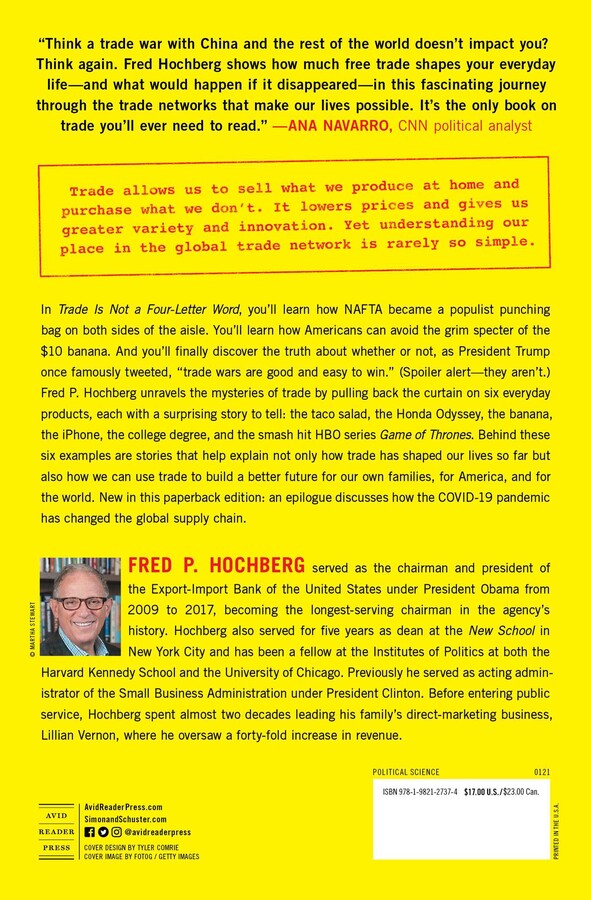 Trade Is Not a Four-Letter Word

How Six Everyday Products Make the Case for Trade

“A sprightly and clear-eyed testimonial to the value of globalization” (The Wall Street Journal) as seen through six surprising everyday goods—the taco salad, the Honda Odyssey, the banana, the iPhone, the college degree, and the blockbuster HBO series Game of Thrones.

Trade allows us to sell what we produce at home and purchase what we don’t. It lowers prices and gives us greater variety and innovation. Yet understanding our place in the global trade network is rarely simple. Trade has become an easy excuse for struggling economies, a scapegoat for our failures to adapt to a changing world, and—for many Americans on both the right and the left—nothing short of a four-letter word.

But as Fred P. Hochberg reminds us, trade is easier to understand than we commonly think. In Trade Is Not a Four-Letter Word, you’ll learn how NAFTA became a populist punching bag on both sides of the aisle. You’ll learn how Americans can avoid the grim specter of the $10 banana. And you’ll finally discover the truth about whether or not, as President Trump has famously tweeted, “trade wars are good and easy to win.” (Spoiler alert—they aren’t.)

Hochberg debunks common trade myths by pulling back the curtain on six everyday products, each with a surprising story to tell: the taco salad, the Honda Odyssey, the banana, the iPhone, the college degree, and the smash hit HBO series Game of Thrones. Behind these six examples are stories that help explain not only how trade has shaped our lives so far but also how we can use trade to build a better future for our own families, for America, and for the world.

Trade Is Not a Four-Letter Word is the antidote to today’s acronym-laden trade jargon pitched to voters with simple promises that rarely play out so one-dimensionally. Packed with colorful examples and highly digestible explanations, Trade Is Not a Four-Letter Word is “an accessible, necessary book that will increase our understanding of trade and economic policies and the ways in which they impact our daily lives” (Library Journal, starred review). 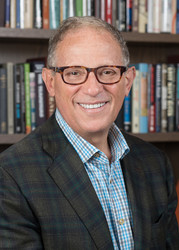 Fred P. Hochberg served as the chairman and president of the Export-Import Bank of the United States under President Obama from 2009 to 2017, becoming the longest-serving chairman in the agency’s history. Hochberg also served for five years as dean at the New School in New York City and has been a fellow at the Institutes of Politics at both the Harvard Kennedy School and the University of Chicago. Previously he served as acting administrator of the Small Business Administration under President Clinton. Before entering public service, Hochberg spent almost two decades leading his family’s direct-marketing business, Lillian Vernon, where he oversaw a forty-fold increase in revenue.

"Trade Is Not a Four-Letter Word is a clear-eyed, informative defense of the importance of free trade. If you’ve ever wondered what makes it possible to enjoy all the products that make daily life possible, this book is for you. And if you haven’t thought about trade, this engaging book will make trade a fascinating subject, one that you never knew you were interested in.” —Indra Nooyi, former CEO of Pepsi-Co

“By turns practical and insightful, Fred’s indefatigable spirit, sound judgement, and depth of experience shine through in Trade Is Not a Four-Letter Word. Throughout his unique upbringing and accomplished career, which spanned a period of profound political and economic change, Fred set a standard of leadership and level-headed collaboration while dealing with the complex issues around global trade and the many ways it impacts our day-to-day lives. And these meaningful lessons about trade apply to all of us—in business and in life.” —Jamie Dimon, Chairman & CEO, JP Morgan Chase

"Think a trade war with China and the rest of the world doesn’t impact you? Think again. Fred Hochberg shows how much free trade shapes your everyday life—and what would happen if it disappeared—in this fascinating journey through the trade networks that make our lives possible. It’s the only book on trade you’ll ever need to read." —Ana Navarro, CNN Political Strategist

“A sprightly and clear-eyed testimonial to the value of globalization.” —The Wall Street Journal

“Hochberg has written an expert defense of trade while also explaining the myths that have clouded our understanding of the ways in which trade fits into everyday life . . . . An accessible, necessary book that will increase our understanding of trade and economic policies and the ways in which they impact our daily lives. Highly recommended.” —Library Journal (starred review)

"A rousing, well-argued defense of global trade in a time of isolationist entrenchment.” —Kirkus

"If you want to understand the importance of global trade to a vibrant U.S. economy, read this book!" —David Rubenstein, Co-Executive Chairman, The Carlyle Group

“[A] quip-filled and illuminating debut . . . Lay readers looking to reach a more informed opinion on trade policy would do well to pick up this nuanced and approachable account.” —Publishers Weekly

“At a time when trade is under fierce assault, Fred Hochberg makes a strong and effective case for its importance and value. A timely book with an important message.” —Michael R. Bloomberg, founder of Bloomberg LP and Bloomberg Philanthropies and three-term mayor of New York

"Fred Hochberg knows what he is talking about. As a former Chairman and President of the US Export-Import Bank, he has seen firsthand how trade is mutually beneficial, not a zero-sum game. In this appealing and engaging book, Hochberg makes a compelling case for trade as a driver of global prosperity, innovation, economic resilience, good jobs, and a higher quality of life for billions of people across the globe. I particularly enjoyed his account of how trade helps empower women—seen clearly in the story of his own mother, who became a successful entrepreneur because she was one of the first people to appreciate the benefits of US-China economic links. I highly recommend this book.” —Christine Lagarde, President of the European Central Bank and former Managing Director of the International Monetary Fund

"Fred Hochberg has done something that, while not impossible, is difficult and rare. He has written about world economic realities in a way that is sophisticated and also accessible, serious but also funny and light. From student to business owner—from employee worried about future jobs, to mayors or governors encouraging those future jobs—readers across a broad range will learn a lot from this book." —James Fallows, co-author of Our Towns

"A compelling case that foreign trade is an overall good for the United States . . . Hochberg’s arguments carry the day.” —Crain's Business New York

“Hochberg knows what he is talking about. . . . Free of equivocation and jargon, he explains how trade works in simple and direct language.” —Inside Higher Ed

“A vigorous case for foreign trade in both goods and services . . . [Hochberg] effec­tively debunks many myths about trade, including the misguided belief that bilateral trade deficits are harm­ful. His book is an easy and enjoyable read, drawing predominately on American examples but applicable to many other countries, as well.” —Foreign Affairs

Trade Is Not a Four-Letter Word

How Six Everyday Products Make the Case for Trade