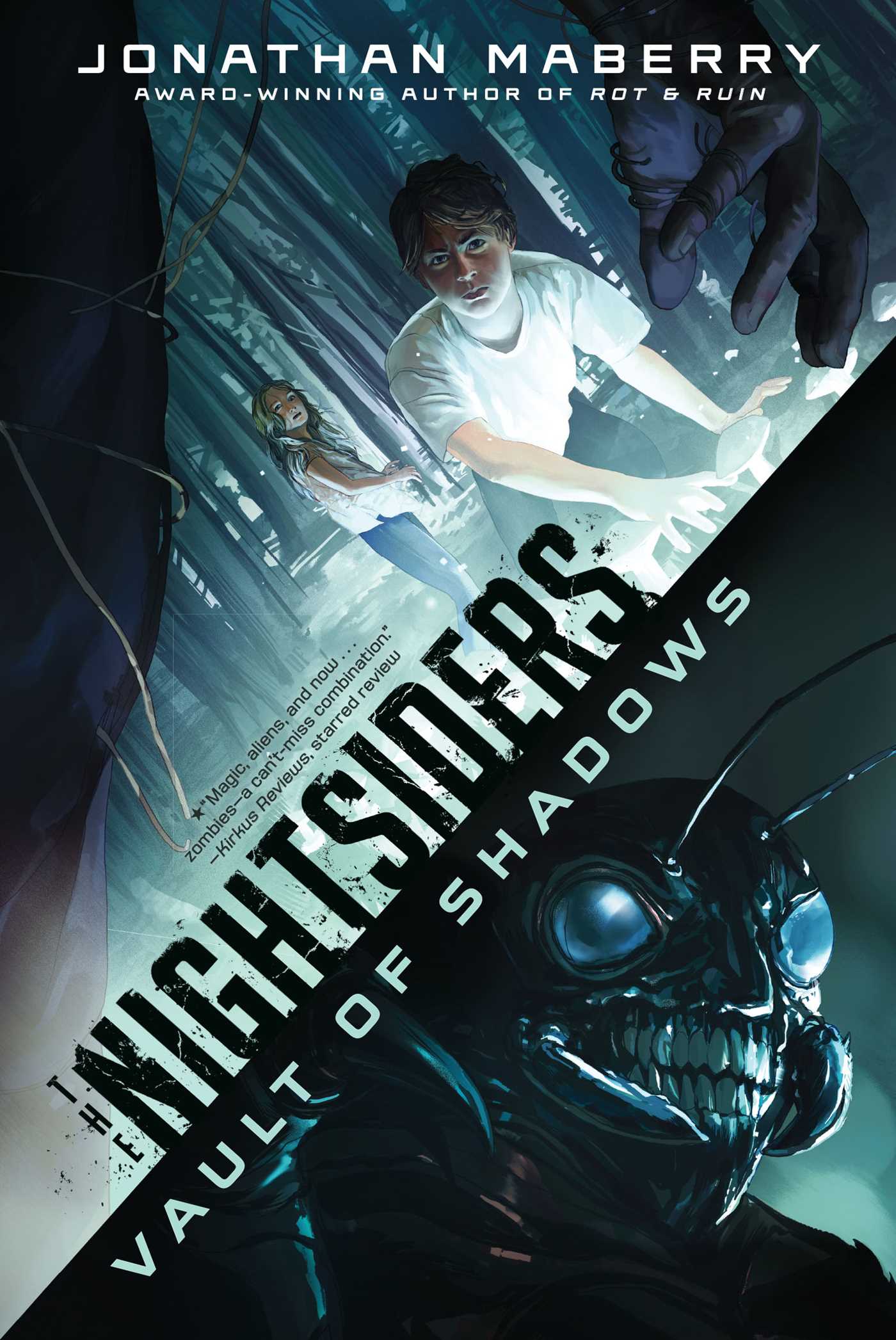 Milo must choose between risking his life to save both the human and magical universes—or to live and save only his own—in the explosive and fast-paced follow-up to the first novel in the Nightsiders series, which Kirkus Reviews called “the perfect mix of science fiction and magic” in a starred review.

After joining forces with the magical Nightsiders and surviving a trip to the enemy Bugs’ Hive ship, Milo Silk still has a lot to fear.

The Huntsman has pledged a revenge worse than death on Milo, a group of nefarious fairies are bent on taking back Earth, and zombie-like holo-men are trapping humans for the Bugs to take. Even more unsettling is that the Witch of the World has disappeared and a mysterious boy is haunting Milo’s dreams in her stead.

But none of these threats compare to what may happen to the world if the humans and the Nightsiders don’t unite to fight for each other.

Vault of Shadows Chapter 1
Milo Silk was trying very hard not to die, but the day was not cooperating.

It was that kind of day, in a week of days like that, and lately Milo seemed to have only those kinds of days and nothing else.

This one was a classic.

He ran through the thick foliage along the muddy banks of Bayou Sauvage, trying not to fall into the churning water, trying not to get eaten by alligators, and trying especially hard not to get shot by alien shocktroopers.

He wouldn’t have bet a fried circuit board or a fused diode on his chances.

All around him the Louisiana swamplands seemed to be filled with lurching shadows, bizarre shapes, and the clickety-click sound of insect legs. Blue pulses of phased energy burned through the air all around him. One blast was so close that it set his hair on fire and he had to slap his head to put it out. It wasn’t a big fire, but it was on his head, so it was big enough.

The stink of burned hair chased him through the swamp.

The hardest part, for Milo, was remembering that this was supposed to be an ambush.

It reminded him of an old saying his dad had said once when a bunch of things went wrong during a garage clean-out at their house: “When you’re up to your armpits in alligators, it’s easy to forget that you came here to drain the swamp.”

Because there were alligators all over the place.

And they wanted to kill him too.

Jonathan Maberry is a New York Times bestselling author, five-time Bram Stoker Award winner, and comic book writer. He writes in multiple genres including suspense, thriller, horror, science fiction, fantasy, and adventure; and he writes for adults, teens, and middle grade. His works include the Joe Ledger thrillers, Glimpse, the Rot & Ruin series, the Dead of Night series, The Wolfman, The X-Files Origins: Devil’s Advocate, Mars One, and many others. Several of his works are in development for film and TV, including V Wars, which will be a Netflix original series. He is the editor of high-profile anthologies including the X-Files books, Aliens: Bug Hunt, Out of Tune, Hardboiled Horror, Baker Street Irregulars, Nights of the Living Dead, and others. He lives in Del Mar, California. Visit him at JonathanMaberry.com and on Twitter (@JonathanMaberry) and Facebook.

"A solid series installment;a must-own where there are fans of the first 'Nightsiders' adventure."

"The Nightsiders is an earthshaking adventure brimming with non-stop action and crawling with creepy insectoid villains."

* "While this particular quest does little toforward the overall story, it serves to expand the world, deepen thecharacters, and raise the stakes on their seemingly impossible war. Magic,aliens, and now…zombies—a can't-miss combination."

More books in this series: The Nightsiders