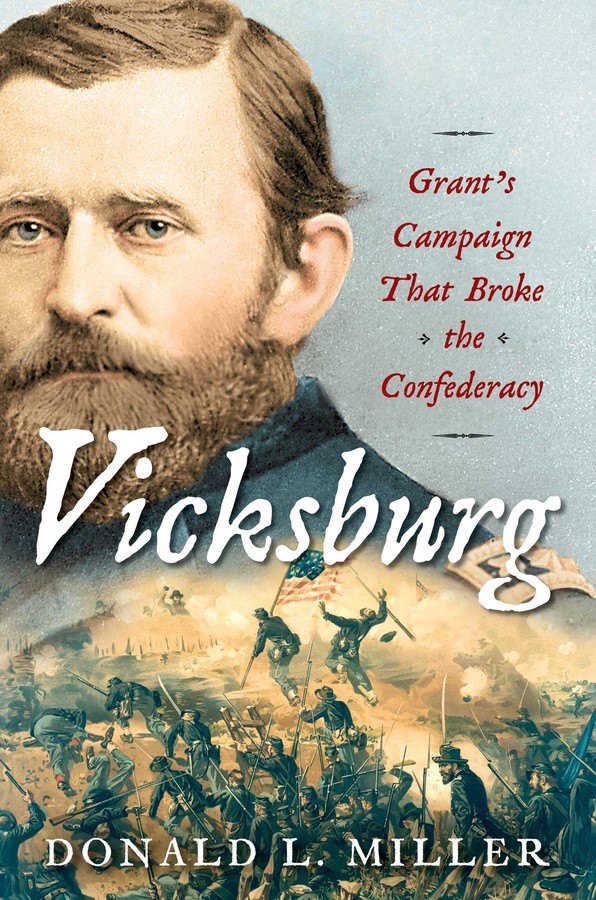 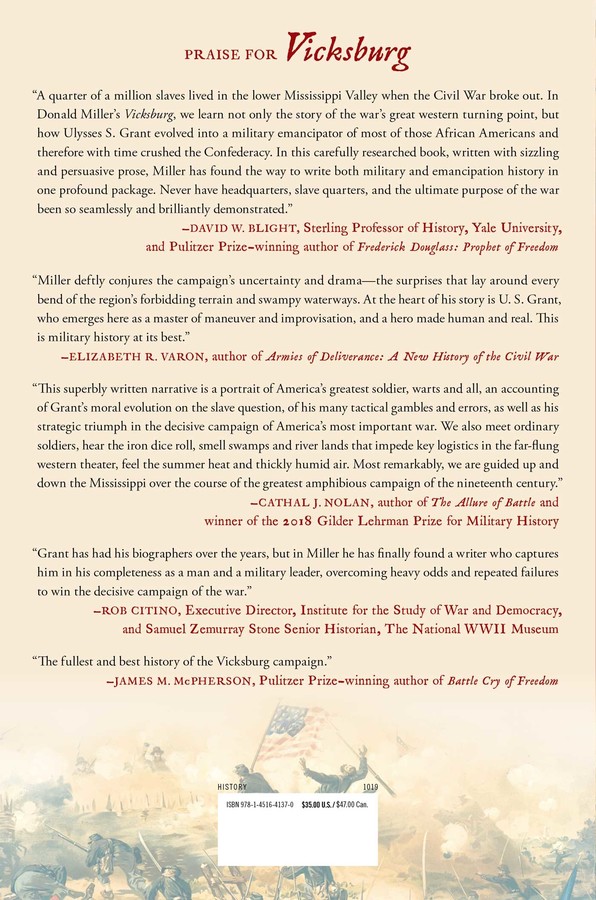 Grant's Campaign That Broke the Confederacy

“A superb account” (The Wall Street Journal) of the longest and most decisive military campaign of the Civil War in Vicksburg, Mississippi, which opened the Mississippi River, split the Confederacy, freed tens of thousands of slaves, and made Ulysses S. Grant the most important general of the war.

Vicksburg, Mississippi, was the last stronghold of the Confederacy on the Mississippi River. It prevented the Union from using the river for shipping between the Union-controlled Midwest and New Orleans and the Gulf of Mexico. The Union navy tried to take Vicksburg, which sat on a high bluff overlooking the river, but couldn’t do it. It took Grant’s army and Admiral David Porter’s navy to successfully invade Mississippi and lay siege to Vicksburg, forcing the city to surrender.

In this “elegant…enlightening…well-researched and well-told” (Publishers Weekly) work, Donald L. Miller tells the full story of this year-long campaign to win the city “with probing intelligence and irresistible passion” (Booklist). He brings to life all the drama, characters, and significance of Vicksburg, a historic moment that rivals any war story in history. In the course of the campaign, tens of thousands of slaves fled to the Union lines, where more than twenty thousand became soldiers, while others seized the plantations they had been forced to work on, destroying the economy of a large part of Mississippi and creating a social revolution. With Vicksburg “Miller has produced a model work that ties together military and social history” (Civil War Times).

Vicksburg solidified Grant’s reputation as the Union’s most capable general. Today no general would ever be permitted to fail as often as Grant did, but ultimately he succeeded in what he himself called the most important battle of the war—the one that all but sealed the fate of the Confederacy.

Prologue PROLOGUE
“The war history of Vicksburg has more about it to interest the general reader than that of any other of the river towns.… Vicksburg… saw warfare in all its phases, both land and water—the siege, the mine, the assault, the repulse, the bombardment, sickness, captivity, famine.”1

—Mark Twain, Life on the Mississippi

“Will it not be the unquestioned sentiment of history that the liberty which Mr. Lincoln declared with his pen General Grant made effective with his sword.”2

In January 1863, Vicksburg, Mississippi, was the most important strategic point in the Confederacy. A fortified town on commanding bluffs above the Mississippi River, it was the last obstacle facing Union forces struggling to regain control of the great river of America and split the Confederacy in two, separating Arkansas, Texas, and much of Louisiana from secessionist states east of the Mississippi. A smaller Confederate river bastion, Port Hudson, in Louisiana, was one hundred and thirty miles downriver from Vicksburg. It was an integral part of Vicksburg’s river defense system and could not survive on its own if Vicksburg fell.

Employing steam-driven riverine warfare, Federal amphibious forces had retaken the Mississippi from Cairo, a Union naval base at the confluence of the Ohio and Mississippi Rivers in southern Illinois, to the Yazoo River, which emptied into the Mississippi a few miles north of Vicksburg. The saltwater fleet of Flag Officer David Glasgow Farragut controlled the river south of Port Hudson to the Gulf of Mexico. In April 1862, Farragut had steamed upriver from the Gulf, seized New Orleans, the South’s largest city and leading cotton port, and captured Baton Rouge, Louisiana, and Natchez, Mississippi, without a fight. Farragut stalled in front of lightly defended Vicksburg, however, when hardened secessionists defiantly refused to surrender. The fleet’s three-masted sloops-of-war, steam-driven wooden ships built for battles at sea, were unable to elevate their guns to bombard the city effectively. Fearing his big vessels would go aground when water levels dropped rapidly in late spring, Farragut headed back to New Orleans.

“A superb account of both military leadership and soldierly warfare. . . . Mr. Miller has done a prodigious amount of research. . . It is an epic story in itself but of course one part of the grand epic of the Civil War. Books like Vicksburg are exactly what Thomas Hardy had in mind when he wrote that ‘war makes rattling good history.’”

“A quarter of a million slaves lived in the lower Mississippi Valley when the Civil War broke out.  In Donald Miller's Vicksburg, we learn not only the story of the war's great western turning point, but how Ulysses S. Grant evolved into a military emancipator of most of those African Americans and therefore with time crushed the Confederacy.  Carefully researched and written with sizzling and persuasive prose, Miller has found the way to write both military and emancipation history in one profound package.  Never have headquarters, slave quarters, and the ultimate purpose of the war been so seamlessly and brilliantly demonstrated.”

“The fullest and best history of the Vicksburg campaign.”

"While there have been many books written about Ulysses S. Grant, no recent publication surpasses Miller’s work in terms of capturing the contradictory nature of this man. . . . Miller has crafted an insightful and striking look at the actions of General Grant at a turning point not only of the Civil War but also of American history. This is a great book and one that Civil war enthusiasts should read.”

“Miller has compiled the best single-volume treatment of the Vicksburg Campaign. His riveting narrative is well researched and highly informative. . . . A tour de force.”

“[Vicksburg] was the most satisfying Union campaign of the war, and Miller chronicles it with aplomb. An expert, detailed account that should remain the definitive account for quite some time.”

"Authoritative, complete, engaging, and enjoyable. . . . Brings to the reader all the rich and crucial history of Ulysses S. Grant's Vicksburg campaign. . . . Vicksburg will become a Civil War standard."

"This is a magnificent book, certainly one of the very best ever written about the Civil War. It has breadth and depth, and it is written in a way that makes the reader truly understand not only the battle and siege of Vicksburg, not only the Civil War, but war itself."

"Readers will marvel at how Grant—a washed-up dry-goods clerk at the beginning of the Civil War—acquires the power and skill that made him the mastermind at Vicksburg of the largest amphibious army-navy operation staged by the U.S. military until D-Day. In a narrative taut with drama, Miller recounts how this resolute Union crusader takes the war down the Mississippi. . . . War history alive with probing intelligence and irresistible passion."

“Miller deftly conjures the campaign's uncertainty and drama—the surprises that lay around every bend of the region's forbidding terrain and swampy waterways. At the heart of his story is U.S. Grant, who emerges here as a master of maneuver and improvisation, and a hero made human and real. This is military history at its best.”

– Elizabeth R. Varon, author of Armies of Deliverance: A New History of the Civil War

“This superbly written narrative is a portrait of America’s greatest soldier, warts and all, an accounting of Grant’s moral evolution on the slave question, of his many tactical gambles and errors, as well as his strategic triumph in the decisive campaign of America’s most important war.  We also meet ordinary soldiers, hear the iron dice roll, smell swamps and river lands that impede key logistics in the far-flung Western theater, feel the summer heat and thickly humid air. Most remarkably, we are guided up and down the Mississippi over the course of the greatest amphibious campaign of the 19th century.”

– Cathal J. Nolan, author of The Allure of Battle, winner of the 2018 Gilder Lehrman Prize for Military History

“Grant has had his biographers over the years, but in Miller he has finally found a writer who captures him in his completeness as a man and a military leader, overcoming heavy odds and repeated failures to win the decisive campaign of the war.”

"Miller provides important context for the final siege of Vicksburg by explaining why the city was vital to control of the Mississippi. . . . He superbly integrates events in Washington, keeping primary attention on those in the field of battle and emphasizing the role of freedmen in the victory. . . . Highly recommended."

Grant's Campaign That Broke the Confederacy