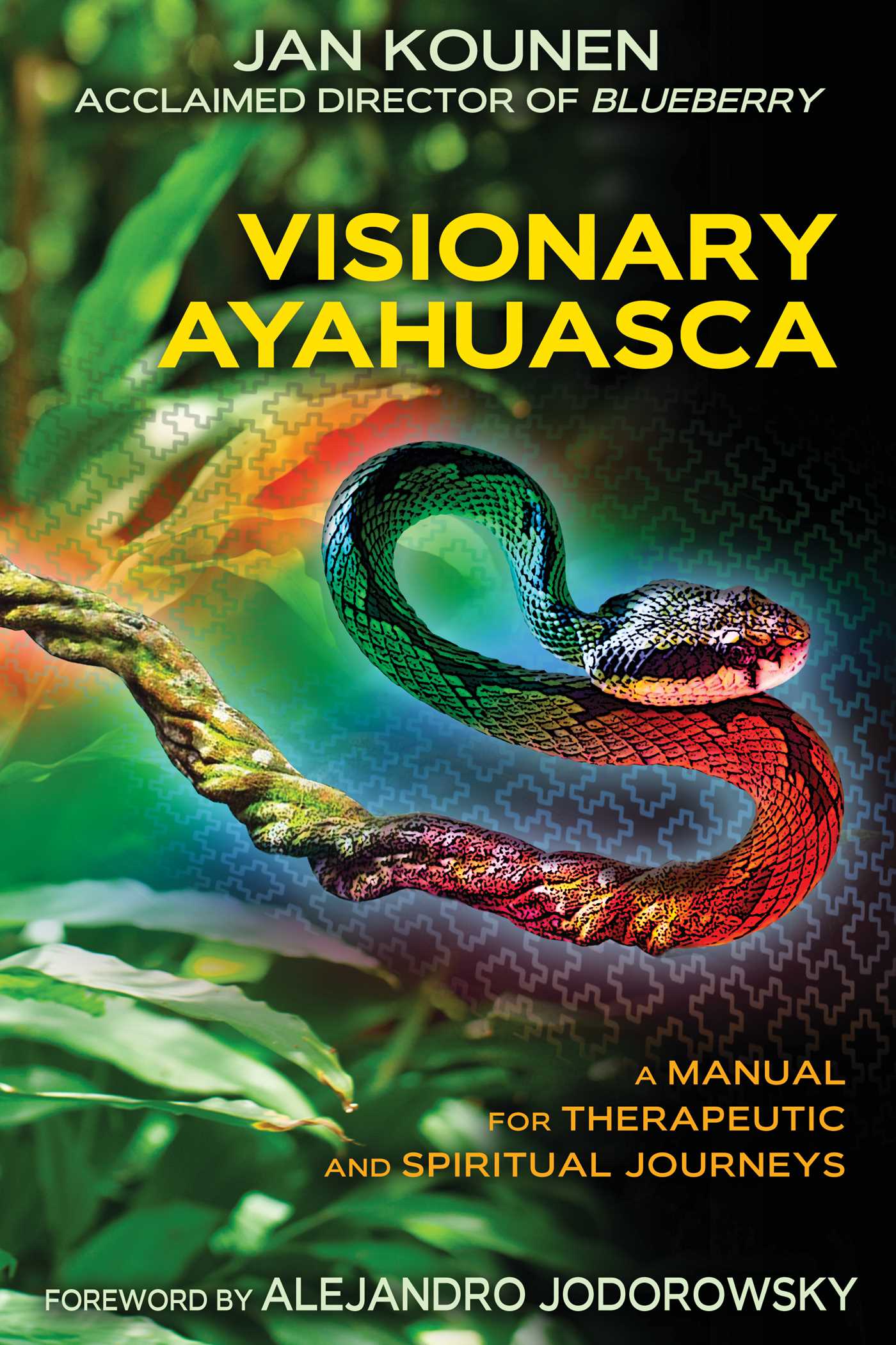 A Manual for Therapeutic and Spiritual Journeys

• Describes how to prepare for the first ceremony, what to do in the days afterward, and how to maintain a shamanic healing diet

• Details some of the author’s own ayahuasca experiences, including an intensive trip in 2009 when he underwent 17 ceremonies

Since 1999 Jan Kounen has regularly traveled to the Peruvian Amazon to participate in ayahuasca ceremonies. At first only a curious filmmaker, over multiple trips he transformed from explorer to apprentice to ayahuasquero and often found himself surrounded by other foreigners coming to the jungle for their first taste of ayahuasca medicine. Knowing how little guidance is available on how to prepare or what to expect, he naturally offered them advice.

Part visionary ayahuasca memoir and part practical guide, this book contains the same step-by-step advice that Kounen provides first-time ayahuasca users in the jungle. He describes how to prepare for the first ceremony and what to do in the days afterward. He explores how to deal with the nausea and details the special preparatory diets an ayahuasca shaman will put you on, often lasting for months but necessary for life-transforming results and teachings from the plant spirits. He also explains how it is far easier to maintain these restrictions in the jungle than in the city.

Detailing his own ayahuasca experiences over hundreds of sessions, including a trip in 2009 when he underwent 17 ceremonies in 25 days, Kounen describes how ayahuasca transformed him. He tells of his meetings with Shipibo healers, including Kestenbetsa, who opened the doors of this world for him, and Panshin Beka, the shaman to whom Kounen became an apprentice. He details the many other plants and foods that are part of the ayahuasca healer’s medicine cabinet, such as toé and tobacco, as well as their icaros, or healing songs. A veritable “what to expect” guide, this book should be your first step prior to committing to ayahuasca.

You have spoken of songs, of ícaros.
What are they for?

The songs, or ícaros, are the main therapeutic tool. They arise from the concepts of the medicina but also sometimes directly from spirits who position themselves and sing in the ear of the healer who then has only to sing what he hears. The healer, or curandero, uses them to guide and care for his patient. But he does so in his own language, and, even though the patient may feel in the melody the intention of the traditional doctor, understanding the meaning of the words, and therefore the concepts, does help the patient who is receiving the song.

I have explored the sharing of this understanding and have had impressive results. In fact, I have seen changes in the nature of what I was experiencing by understanding the songs--not all the words of course, because I don’t speak the language, but enough to recognize at key moments the nature of the way the healer was operating. I had occasion to have this experience with others as well.

During a ceremony with French ayahuasquero friends, someone suggested I sing and I did so in Shipibo and in French. Something different took place for them when the songs were in their mother tongue. From the moment I sang an ícaro in French, the person who received it was immediately connected to the work, and almost all the others who were present in the maloca as well. The visions were harmonized in the same worlds I had described.

If you hear, “I descend into my intoxication” or “I align my senses . . . I align my thoughts, or my body” you concentrate yourself in your intoxication, in your senses, in your thoughts or in your body. No longer are you going to think, “Oh my gawd! Where am I, what is he dragging me into?” You have an object to direct your mind to.

Since it will not always be possible to hear the ícaros sung in your native language, it’s valuable to be able to grasp the structure and a few Shipibo words in order to connect to the meaning of the songs.

Here is a small, basic word list of traditional concepts that will help you comprehend the ícaros.

Nocon: If the verse begins with Nocon, the healer is singing for himself. He can do that at any moment in the song and for a variety of reasons. At the beginning of the treatment, he needs to gather his strength and center it, a bit like a preparing for a race or an inner runway takeoff.

Mi: If it’s Mi at the beginning, the healer is singing for you. He’s leaving his runway and beginning the treatment.

Here’s an example of these words in use:

Nocon shinan punteque.
I center myself--in my mind and in my senses. I align myself.

Nocon yora kuchi ayonban.
I center myself strongly in my body and in doing this I give it strength. I align it.

Nocon kuchi pae punteque.
I center myself in the strong intoxication of the ayahuasca. (I don’t try to run away from it, on the contrary I let it unfurl.) I align the intoxication.

If now the healer sings
Mi shinan punteque,
this becomes
I center you in your mind and in your senses.

In a way, he is aligning your intoxication and beginning to harmonize your inner worlds through his dive into your world of visions and based on the stability of his own state.

He may move back and forth from Nocon to Mi in the course of the song since, assuming that the flight has taken off, the treatment begins and then the flight is dragged into the patient’s emotions. He can chocar (collide with) negative energies, just as lightning can strike a plane. He then has to “reset the trim”--that is, level out the angle of flight. He turns the song back to himself, re-centers himself inside his own song, gathers up his drive once again and takes off again to tackle the clouds. Planes are intended to withstand lightning, healers are used to “shocking up against” energy. So don’t be upset if he sings for himself (nocon, nocon, nocon). When he aligns his intoxication and sings for himself, you benefit by that too. It’s all part of the treatment.

If he sings Akon shaman akindra that means, “I do it nicely, I do it well, I do it with attention.” It’s always good to remember this one. It’s a phrase that recurs often; a beautiful intention.

If you hear the words choro, pisha, sua, it’s because the cleansing phase is beginning. That means: throwing out, cleansing, evacuating, having done with it. These words are often associated with vainquin and vainchon and ramacayara: throw out, clean, do it now.

Remember this because there’s a good chance you will have bad thoughts, and these words will be helpful at that point! For example, “his song isn’t doing me any good—blah, blah, blah . . .” This is your negativity, which is resisting the cleansing and manifesting itself in the field of your thoughts.

The songs often finish or weave around harmonization:

A song can also be made up of a series of two or even three songs. For example, the first for the opening and alignment of the intoxication, the second for cleansing, and the third to give strength.

Filmmaker Jan Kounen has created a number of films and documentaries, including the celebrated Blueberry, released in the United States as Renegades.

“This is the first book that anyone thinking about taking ayahuasca, or taking it again, must own. The manual section is honest, revealing, invaluable, and packed with everything, including how to find a safe and sane teacher, how to sit during ceremony, what kinds of clothes to bring, and why dietas are necessary for real healing. Jan’s own journal of his progress is unusually candid in disclosing the obstacles and difficulties that arise even as your commitment to this path deepens.”

“This is a great book for anyone who is planning to attend an ayahuasca ceremony. It is packed with useful information, observations, and relevant facts providing a valuable guide to what you can really expect from the vine of souls.”

“A rich, honest, informative testimony based on numerous courageous acts, this book is both extremist and full of good sense--outlandish and matter of fact. A filmmaker’s guide to the cinematic world of ayahuasca.”

“Jan Kounen’s descriptions of his experiences with ayahuasca are informed, poetic, and at times authentically visceral. This book provides excellent insights into the discipline and the rigors of the traditional plant diet as well as the underlying relationship between human and plant consciousness. This is definitely a book for both the person considering working with ayahuasca and for those with significant experience with the plant. It was a pleasure to read this book.”

“In Vistionary Ayahuasca, 10 years of experience with ayahuasca medicina is laid out beautifully. It has lots of information for anyone considering going down the ayahuasca trail. Don’t leave home without it!”

“A veritable what to expect guide, this book should be your first step prior to committing to ayahuasca. This book is overflowing with helpful information, facts, and personal accounts of what you can expect from your ayahuasca experience.”

A Manual for Therapeutic and Spiritual Journeys