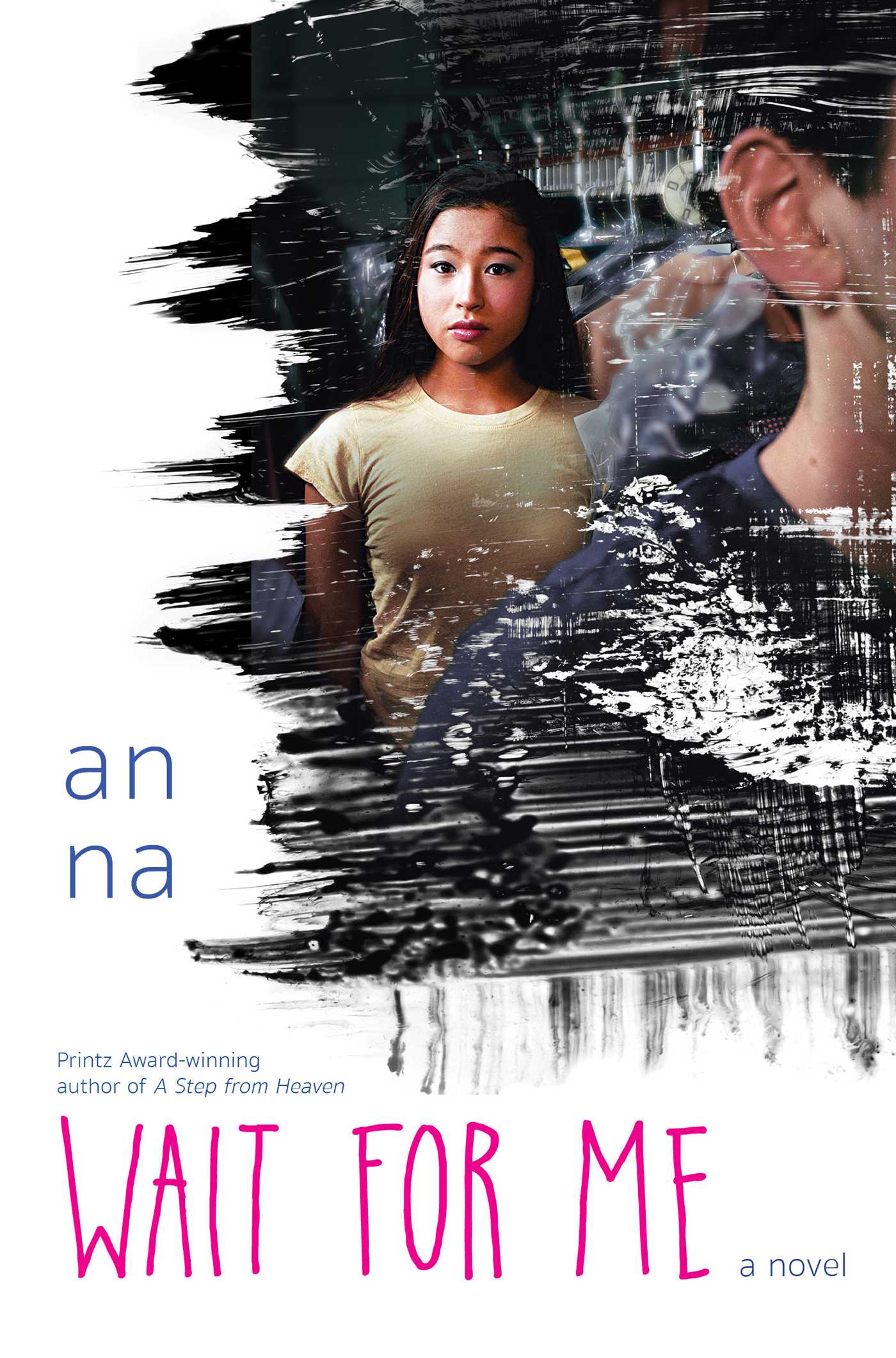 A teen pretends to be a perfect daughter, but her reality is far darker, in this penetrating look at identity and finding yourself amidst parents’ dreams for you, by Printz Award–winning novelist An Na.

Mina seems like the perfect daughter. Straight A student. Bound for Harvard. Helps out at her family’s dry cleaning store. Takes care of her hearing-impaired little sister. She is her parents’ pride and joy. From the outside, Mina is doing everything right. On the inside, Mina knows the truth. Her perfect-daughter life is a lie. And it isn’t until she meets someone to whom she cannot lie that she’s willing to consider what the truth might mean, and what it will cost. Because Ysrael, the young migrant worker who dreams of becoming a musician and who comes to work for her family, asks Mina the one question that scares her the most: What does she actually want?

Wait for Me mina
I FOUND HER SLEEPING on the couch, her body curled to one side, her head lodged against the faded green armrest. I pushed her damp bangs off her forehead and whispered in her good ear. “Suna.”

She stirred in her sleep, an arm flung up over her head. Her stuffed dog peeked out from under her neck.

“Suna.” I dangled her hearing aid in front of her, letting it bump against her forehead. Her eyes remained closed. I gently shook her shoulder. “Suna, wake up.”

Her eyes fluttered and then finally opened. She looked blankly into my face for a moment before a smile skimmed across her lips.

“Hi, Uhn-nee,” she said and rubbed the sleep from her eyes using the back of her hand, fingers curled like a baby. If only she knew how young she looked when she did that, she would have stopped instantly. She was always protesting that she wasn’t a baby anymore, this sister of mine. Certainly a baby couldn’t start middle school. She had been certain that the summer would work magic. Make her grow in all the right places. And here it was the beginning of August and my old training bra was still in the dresser.

Suna sat up and moved to one side so that I could sit down. I kicked out my legs to rest them on the coffee table and dropped the hearing aid into her lap. In a practiced gesture, Suna held her hair back with one hand and dropped her chin as she hooked the larger molded plastic amplifier behind her ear and inserted the smaller piece into the canal. She smoothed her hair back over her ear.

“I’m going to chain you to your bed if you don’t stop sleepwalking,” I joked even as I thought seriously about taking her to the doctor at the clinic. The sleepwalking had been kind of funny at first, but when it didn’t stop, it started to freak me out. Sometimes if I caught her as she was getting out of bed, she seemed completely awake. Eyes open and everything.

“Did Uhmma and Apa leave already?” Suna asked. She glanced behind her to the kitchen as though expecting them to be eating.

A dry cleaning business set time by the rising sun. And there were never enough hands. With the business so slow the last few years, there wasn’t money to hire employees. Uhmma and Apa relied on us, and mostly me, to help out at every opportunity. Before school, after school, during vacations and summers.

As Suna and I walked toward the car, I could almost see the tiny waves of heat trapped inside, ready to bake us alive. As soon as we opened the doors, the hot air poured out, pooling around our legs. Suna and I furiously rolled down the windows and adjusted the beach towels that kept the backs of our thighs from being scorched by the hot vinyl. I tossed my ponytail over one shoulder and jammed the key into the ignition.

I sighed and slouched in my seat. Suna closed her eyes and began to mutter, talking to the car she had named Sally. The white Nissan Sentra was older than God, but Suna believed it just needed some coaxing.

“Okay,” Suna said after a minute.

“Sally said she’d work for us today?” I asked and smiled.

“I told her I’d wash her windows if she was good.” Suna quickly patted the burning-hot dashboard, then blew on her hand. She treated the car like a pet, rewarding it when everything ran smoothly, gently chiding when we had to take it in for service. It all started the day she learned that plants responded to music and talking. No matter how much I tried to reason with her, she continued talking to the car.

I turned the ignition and held my breath. These last few days had been so odd. What with the Santa Ana winds starting up so early in the middle of summer instead of the fall, Suna sleepwalking, the washing machines breaking down. Everything felt off balance.

Sally sputtered to life, her guttural engine barely catching. One more day. Already the sweat pooled behind my knees and trickled down my calves. I turned on the radio and eased out of the parking space, slowly driving over the three speed bumps that led out of the apartment complex, then turned onto the main street.

El Cajon Boulevard. Six lanes of black asphalt stretching far into the horizon, shimmering with waves of heat. Strip malls lined up on either side with their garish painted signs. A song about summer came on. Something about soaking up the sun. What a joke. But I started to sing along. Loud as I could until Suna broke into laughter. It always amazed me how music could take me to another place. It didn’t matter if I was at church singing in the chorus about God or jamming to the radio or listening to my CDs. Even the most insipid song had something. A beat, a melody, that lone bass holding everything together. But when a song was right, when everything fell together, each note, each rise and dip of the voice filled me with a sense of yearning. A vastness. The sensation of flight seeping into my skin until I was skimming through the air, the music holding me aloft.

Red light. Even this early on a summer day, the migrant workers stood on the corners, waiting for work. For a pickup truck to slow down and stop, a pale arm reaching out the window, motioning for two or three to hop in back. I didn’t understand how they could stand to be dressed in those plaid button-down long-sleeve shirts and jeans. Weren’t they dying in all those clothes? The light turned green and I sped past.

I flipped on the right turn signal, eased the car into the parking lot of one of the strip malls. I could see Uhmma through the glass walls of the dry cleaners. She was at the front, looking through the cash register.

I turned the wheel too quickly, making Sally squeal in protest, and parked in the alley behind Uhmma and Apa’s van.

Suna turned in her seat to look at me.

I sat still for a moment and stared at the open back door of the dry cleaners. What were the chances? What was the worst Uhmma could do? There was plenty, but would she even know from looking at the receipts? I had been the only one to handle them since the beginning of summer. I cursed under my breath. I should have doctored them yesterday. It was too late now.

“Come on,” I said, and Suna and I stepped out of the car and walked toward the dry cleaners. Even in this heat, walking into the store was like stepping from the clouds straight into hell.
An Na

An Na was born in Korea and grew up in San Diego, California. A former middle school English and history teacher, she is the critically acclaimed author of The Fold, Wait for Me, the National Book Award finalist and Printz Award–winning novel A Step from Heaven, and The Place Between Breaths. She lives in Vermont.

More books from this author: An Na