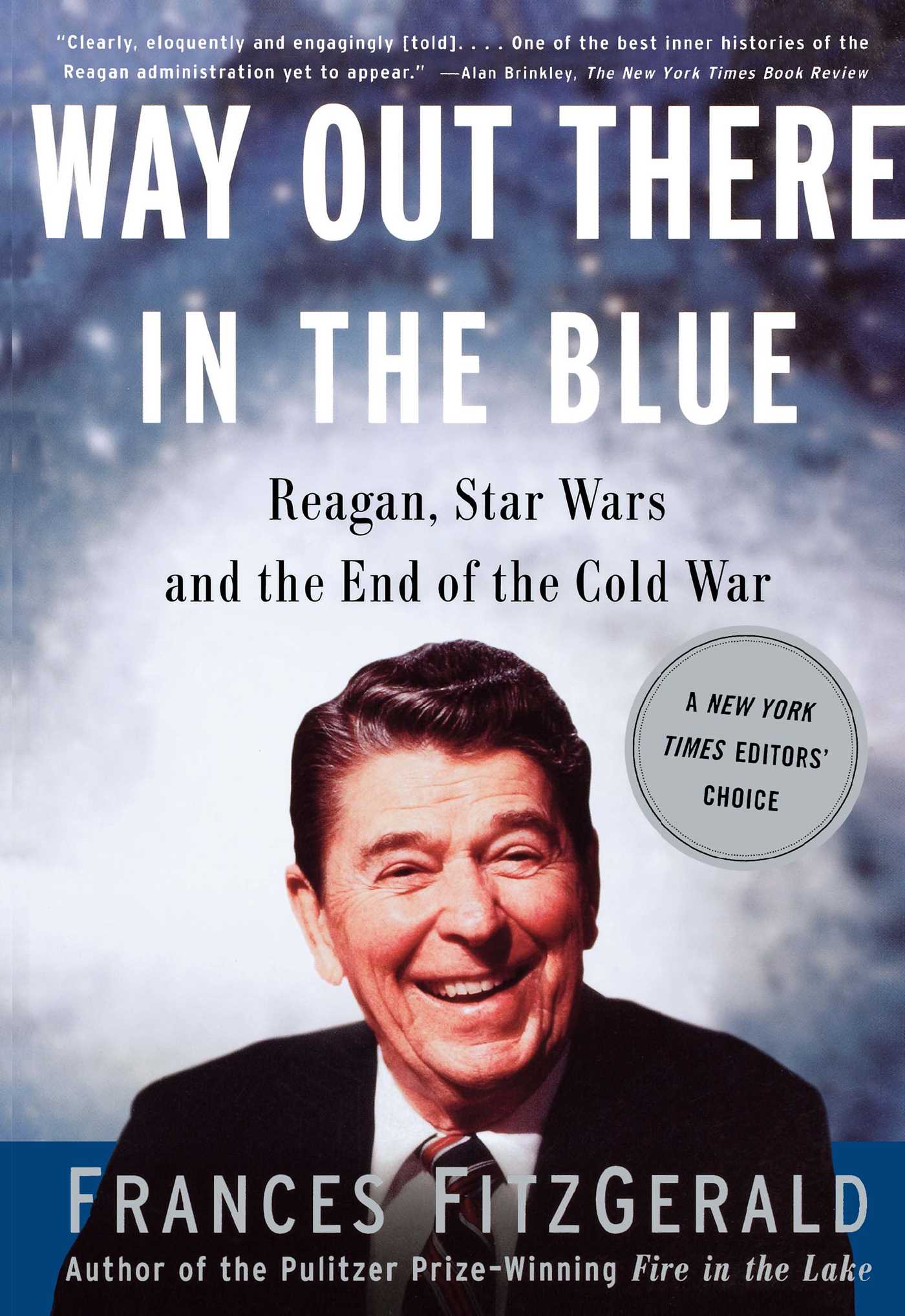 Way Out There In the Blue

Reagan, Star Wars and the End of the Cold War

By Frances FitzGerald
LIST PRICE $29.99
PRICE MAY VARY BY RETAILER

Way Out There in the Blue is a major work of history by the Pulitzer Prize­winning author of Fire in the Lake. Using the Star Wars missile defense program as a magnifying glass on his presidency, Frances FitzGerald gives us a wholly original portrait of Ronald Reagan, the most puzzling president of the last half of the twentieth century.
Reagan's presidency and the man himself have always been difficult to fathom. His influence was enormous, and the few powerful ideas he espoused remain with us still -- yet he seemed nothing more than a charming, simple-minded, inattentive actor. FitzGerald shows us a Reagan far more complex than the man we thought we knew. A master of the American language and of self-presentation, the greatest storyteller ever to occupy the Oval Office, Reagan created a compelling public persona that bore little relationship to himself.
The real Ronald Reagan -- the Reagan who emerges from FitzGerald's book -- was a gifted politician with a deep understanding of the American national psyche and at the same time an executive almost totally disengaged from the policies of his administration and from the people who surrounded him.
The idea that America should have an impregnable shield against nuclear weapons was Reagan's invention. His famous Star Wars speech, in which he promised us such a shield and called upon scientists to produce it, gave rise to the Strategic Defense Initiative. Reagan used his sure understanding of American mythology, history and politics to persuade the country that a perfect defense against Soviet nuclear weapons would be possible, even though the technology did not exist and was not remotely feasible. His idea turned into a multibillion-dollar research program. SDI played a central role in U.S.-Soviet relations at a crucial juncture in the Cold War, and in a different form it survives to this day.
Drawing on prodigious research, including interviews with the participants, FitzGerald offers new insights into American foreign policy in the Reagan era. She gives us revealing portraits of major players in Reagan's administration, including George Shultz, Caspar Weinberger, Donald Regan and Paul Nitze, and she provides a radically new view of what happened at the Reagan-Gorbachev summits in Geneva, Reykjavik, Washington and Moscow.
FitzGerald describes the fierce battles among Reagan's advisers and the frightening increase of Cold War tensions during Reagan's first term. She shows how the president who presided over the greatest peacetime military buildup came to espouse the elimination of nuclear weapons, and how the man who insisted that the Soviet Union was an "evil empire" came to embrace the Soviet leader, Mikhail Gorbachev, and to proclaim an end to the Cold War long before most in Washington understood that it had ended.
Way Out There in the Blue is a ground-breaking history of the American side of the end of the Cold War. Both appalling and funny, it is a black comedy in which Reagan, playing the role he wrote for himself, is the hero.

Frances FitzGerald is the recipient of the Pulitzer Prize, the National Book Award, the Bancroft Prize, and a prize from the National Academy of Arts and Sciences. She is the author of The Evangelicals: The Struggle to Shape America; Fire in the Lake: the Vietnamese and the Americans in Vietnam; America Revised: History School Books in the Twentieth Century; Cities on a Hill: A Journey through Contemporary American Cultures; Way Out in the Blue: Reagan, Star Wars and the End of the Cold War; and Vietnam: Spirits of the Earth. She has written for The New Yorker, The Atlantic, Harper’s, The New York Review of Books, The Nation, Rolling Stone, and Esquire.

Alan Brinkley The New York Times Book Review Clearly, eloquently and engagingly [told]...One of the best inner histories of the Reagan administration yet to appear.

David M. Shribman The Boston Globe One of the most imaginative chronicles of Ronald Reagan's presidency.

James Hershberg Chicago Tribune A devastating picture of the disarray, drift and acrimonious division that frequently characterized the administration...A significant contribution to the simmering argument...over the meaning and conduct of his presidency.

Way Out There In the Blue

Reagan, Star Wars and the End of the Cold War

By Frances FitzGerald
LIST PRICE $29.99
PRICE MAY VARY BY RETAILER