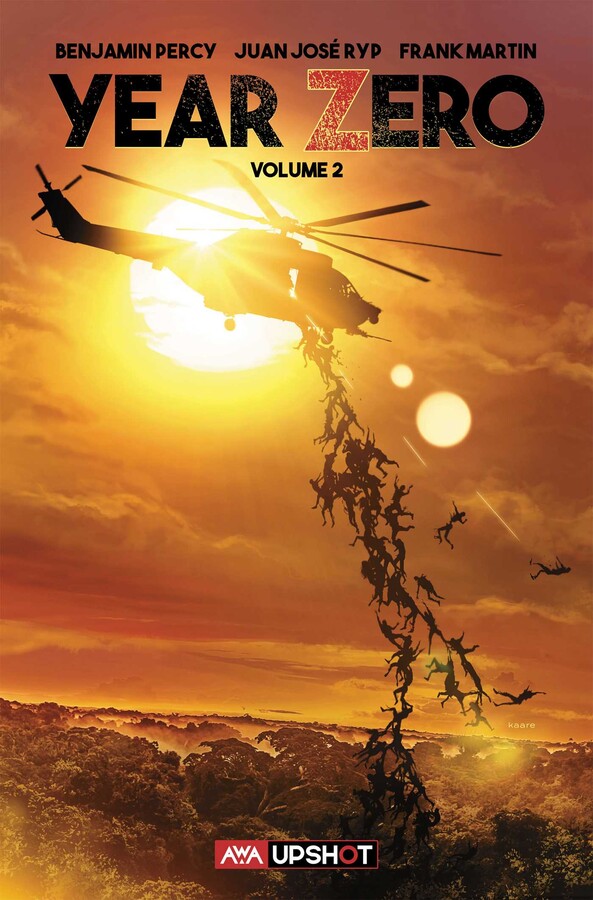 Upshot’s hit series Year Zero returns with four new harrowing tales of survival from around a post apocalyptic world, set several months after the events on Volume One: A grizzled Norwegian sea captain and her two young grandchildren navigate an ocean teeming with undead while eluding the relentless pirates on their trail. A Colombian cartel boss indulges all of his most sadistic whims unaware that a threat far greater than zombies is headed toward his jungle fortress. A Rwandan doctor must overcome the crippling fear that has plagued him all his life as he stumbles through the African bush. And a pregnant woman barricaded in an American big box store discovers that the greatest threat to her life – and her unborn child’s – might not be undead. Benjamin Percy (Wolverine, X-Force) once again pens this global look at the zombie apocalypse, now joined by artist Juan Jose Ryp (Britannia) and colorist Frank Martin (Infinity Wars).

Benjamin Percy is the author of four novels -- The Dark Net, The Dead Lands, Red Moon, and The Wilding -- as well as three short story collections -- Suicide Woods, Refresh, Refresh, and The Language of Elk. His essay collection, Thrill Me, is widely taught in creative writing classrooms. In 2021, his sci-fi trilogy, The Comet Cycle, will be published by Houghton Mifflin Harcourt; it has been optioned by the Russo brothers (Avengers: Infinity War) for development.

He broke into comics in 2014 with a two-shot Batman story for Detective Comics. He is known for his celebrated runs on Wolverine, Nightwing, Green Arrow, Teen Titans, and James Bond. His scripted podcast series -- Wolverine (produced by Marvel and Stitcher ) -- is now in its second season. It was listed as one of the top fifteen podcasts of the year by Apple and won the iHeart Radio Award for Best Scripted Podcast.

His fiction and nonfiction have been published by Esquire, GQ, Time, Men's Journal, Outside, the Wall Street Journal, the New York Times, and the Paris Review. His honors include the Whiting Award, the Plimpton Prize, the Pushcart Prize, an NEA fellowship, and inclusion in Best American Short Stories and Best American Comics. Read more about him here: www.benjaminpercy.com

“A new take on the zombie apocalypse idea, YEAR ZERO looks at an undead pandemic by focusing on small stories across the world as individuals struggle to come to terms with what’s happening — allowing the series as a whole to explore different moral (and existential) questions relating to the relentless, shambling threat.”

“By making the characters the focus of the story, the zombie infested world merely the backdrop to the comic, the first volume of YEAR ZERO was a rip roaring success. With this second volume Benjamin Percy continues to do everything which worked well in the first volume but with brand new, and if anything more interesting, characters. Fans of the first volume will lap this up, as will fans of the walking dead. It's a great jumping on point as well if you haven't read the comic yet. The art is incredible and the icing on the cake.”