Tiffany Pham is the founder & CEO of Mogul, one of the largest platforms for women worldwide, enabling them to connect, share information, and access knowledge from each other. A coder, she developed the first version of Mogul, reaching millions of women per week across 196 countries and 30,470 cities. Tiffany was named one of Forbes’s “30 Under 30” in media, Business Insider’s “30 Most Important Women Under 30” in technology, ELLE Magazine’s “30 Women Under 30 Who Are Changing the World,” Good Housekeeping’s “Awesome Women Award” Winner, SE’s “Top 100 Social Entrepreneurs,” the Recipient of the Cadillac “IVY Innovator” Award, a Tribeca Disruptive Innovation Awards Fellow, Recipient of the SmartCEO Magazine “Smart CEO Award,” Recipient of the "Alice Paul Equality Award," Recipient of the "Innovation & Inclusion Award for Social Entrepreneurship," and a New York Business Journal’s “Woman of Influence.” Tiffany is a judge on the TLC TV show “Girl Starter,” and cohost of the show “Positive Pushback.” She speaks at the United Nations, Microsoft, Hearst, Viacom, Bloomberg, New York Times, AOL, Prudential, Harvard Business School, Wharton Business School, Scripps Research Institute, Columbia, SXSW, Paris, Vienna, Berlin, Panama, and Dubai. She is a graduate of Yale and Harvard Business School. 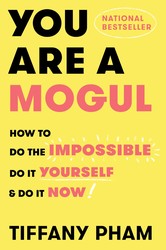