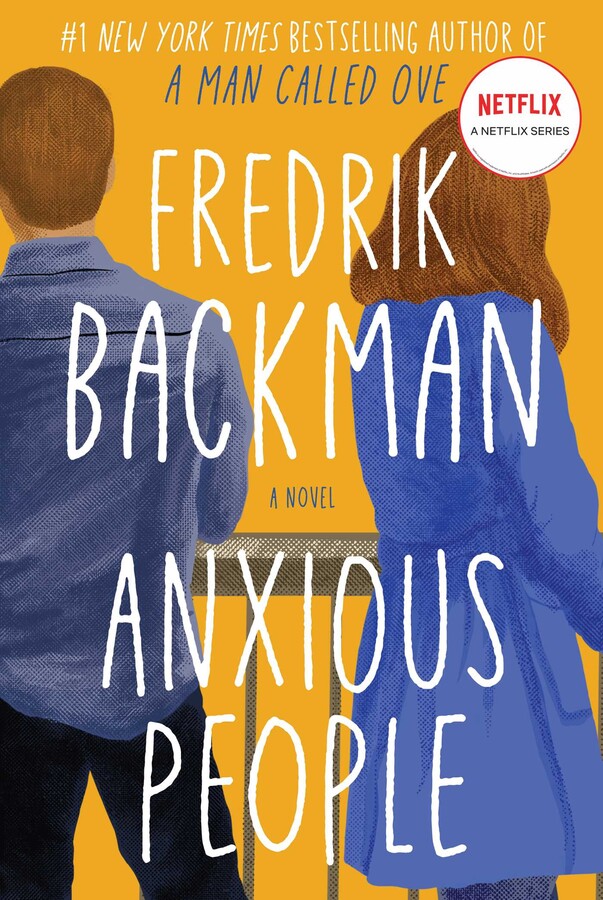 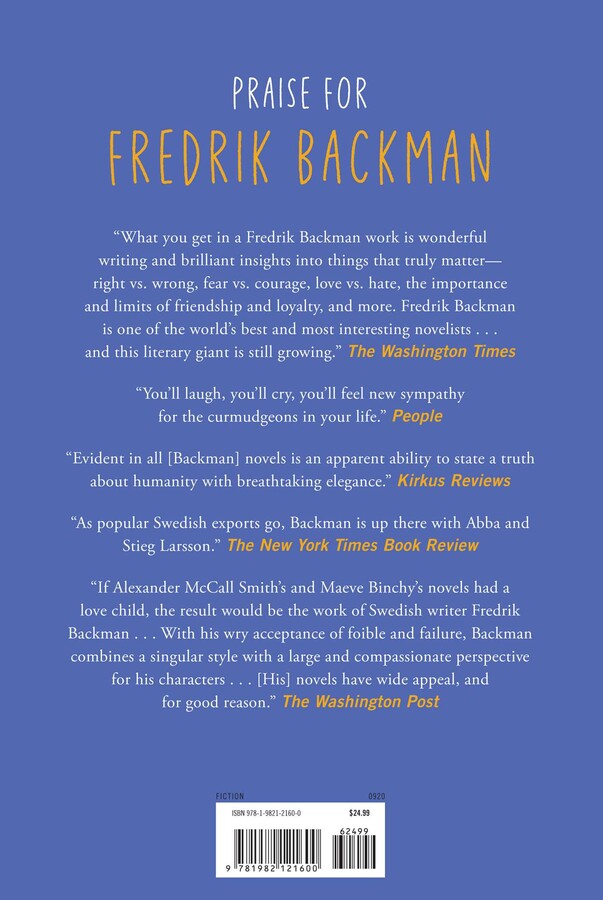 From the #1 New York Times bestselling author of A Man Called Ove and “writer of astonishing depth” (The Washington Times) comes a poignant comedy about a crime that never took place, a would-be bank robber who disappears into thin air, and eight extremely anxious strangers who find they have more in common than they ever imagined.

Viewing an apartment normally doesn’t turn into a life-or-death situation, but this particular open house becomes just that when a failed bank robber bursts in and takes everyone in the apartment hostage. As the pressure mounts, the eight strangers begin slowly opening up to one another and reveal long-hidden truths.

First is Zara, a wealthy bank director who has been too busy to care about anyone else until tragedy changed her life. Now, she’s obsessed with visiting open houses to see how ordinary people live—and, perhaps, to set an old wrong to right. Then there’s Roger and Anna-Lena, an Ikea-addicted retired couple who are on a never-ending hunt for fixer-uppers to hide the fact that they don’t know how to fix their own failing marriage. Julia and Ro are a young lesbian couple and soon-to-be parents who are nervous about their chances for a successful life together since they can’t agree on anything. And there’s Estelle, an eighty-year-old woman who has lived long enough to be unimpressed by a masked bank robber waving a gun in her face. And despite the story she tells them all, Estelle hasn’t really come to the apartment to view it for her daughter, and her husband really isn’t outside parking the car.

As police surround the premises and television channels broadcast the hostage situation live, the tension mounts and even deeper secrets are slowly revealed. Before long, the robber must decide which is the more terrifying prospect: going out to face the police, or staying in the apartment with this group of impossible people.

Rich with Fredrik Backman’s “pitch-perfect dialogue and an unparalleled understanding of human nature” (Shelf Awareness), Anxious People’s whimsical plot serves up unforgettable insights into the human condition and a gentle reminder to be compassionate to all the anxious people we encounter every day.

Chapter 1 1
A bank robbery. A hostage drama. A stairwell full of police officers on their way to storm an apartment. It was easy to get to this point, much easier than you might think. All it took was one single really bad idea.

This story is about a lot of things, but mostly about idiots. So it needs saying from the outset that it’s always very easy to declare that other people are idiots, but only if you forget how idiotically difficult being human is. Especially if you have other people you’re trying to be a reasonably good human being for.

Because there’s such an unbelievable amount that we’re all supposed to be able to cope with these days. You’re supposed to have a job, and somewhere to live, and a family, and you’re supposed to pay taxes and have clean underwear and remember the password to your damn Wi-Fi. Some of us never manage to get the chaos under control, so our lives simply carry on, the world spinning through space at two million miles an hour while we bounce about on its surface like so many lost socks. Our hearts are bars of soap that we keep losing hold of; the moment we relax, they drift off and fall in love and get broken, all in the wink of an eye. We’re not in control. So we learn to pretend, all the time, about our jobs and our marriages and our children and everything else. We pretend we’re normal, that we’re reasonably well educated, that we understand “amortization levels” and “inflation rates.” That we know how sex works. In truth, we know as much about sex as we do about USB leads, and it always takes us four tries to get those little buggers in. (Wrong way round, wrong way round, wrong way round, there! In!) We pretend to be good parents when all we really do is provide our kids with food and clothing and tell them off when they put chewing gum they find on the ground in their mouths. We tried keeping tropical fish once and they all died. And we really don’t know more about children than tropical fish, so the responsibility frightens the life out of us each morning. We don’t have a plan, we just do our best to get through the day, because there’ll be another one coming along tomorrow.

Sometimes it hurts, it really hurts, for no other reason than the fact that our skin doesn’t feel like it’s ours. Sometimes we panic, because the bills need paying and we have to be grown-up and we don’t know how, because it’s so horribly, desperately easy to fail at being grown-up.

Because everyone loves someone, and anyone who loves someone has had those desperate nights where we lie awake trying to figure out how we can afford to carry on being human beings. Sometimes that makes us do things that seem ridiculous in hindsight, but which felt like the only way out at the time.

One single really bad idea. That’s all it takes.

One morning, for instance, a thirty-nine-year-old resident of a not particularly large or noteworthy town left home clutching a pistol, and that was—in hindsight—a really stupid idea. Because this is a story about a hostage drama, but that wasn’t the intention. That is to say, it was the intention that it should be a story, but it wasn’t the intention that it should be about a hostage drama. It was supposed to be about a bank robbery. But everything got a bit messed up, because sometimes that happens with bank robberies. So the thirty-nine-year-old bank robber fled, but with no escape plan, and the thing about escape plans is just like what the bank robber’s mom always said years ago, when the bank robber forgot the ice cubes and slices of lemon in the kitchen and had to run back: “If your head isn’t up to the job, your legs better be!” (It should be noted that when she died, the bank robber’s mom consisted of so much gin and tonic that they didn’t dare cremate her because of the risk of explosion, but that doesn’t mean she didn’t have good advice to offer.) So after the bank robbery that wasn’t actually a bank robbery, the police showed up, of course, so the bank robber got scared and ran out, across the street and into the first door that presented itself. It’s probably a bit harsh to label the bank robber an idiot simply because of that, but… well, it certainly wasn’t an act of genius. Because the door led to a stairwell with no other exits, which meant the bank robber’s only option was to run up the stairs.

It should be noted that this particular bank robber had the same level of fitness as the average thirty-nine-year-old. Not one of those big-city thirty-nine-year-olds who deal with their midlife crisis by buying ridiculously expensive cycling shorts and swimming caps because they have a black hole in their soul that devours Instagram pictures, more the sort of thirty-nine-year-old whose daily consumption of cheese and carbohydrates was more likely to be classified medically as a cry for help rather than a diet. So by the time the bank robber reached the top floor, all sorts of glands had opened up, causing breathing that sounded like something you usually associate with the sort of secret societies that demand a password through a hatch in the door before they let you in. By this point, any chance of evading the police had dwindled to pretty much nonexistent.

But by chance the robber turned and saw that the door to one of the apartments in the building was open, because that particular apartment happened to be up for sale and was full of prospective buyers looking around. So the bank robber stumbled in, panting and sweaty, holding the pistol in the air, and that was how this story ended up becoming a hostage drama.

And then things went the way they did: the police surrounded the building, reporters showed up, the story made it onto the television news. The whole thing went on for several hours, until the bank robber had to give up. There was no other choice. So all eight people who had been held hostage, seven prospective buyers and one real estate agent, were released. A couple of minutes later the police stormed the apartment. But by then it was empty.

No one knew where the bank robber had gone.

That’s really all you need to know at this point. Now the story can begin. 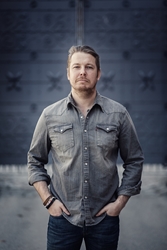 Fredrik Backman is the #1 New York Times bestselling author of A Man Called Ove, My Grandmother Asked Me to Tell You She’s Sorry, Britt-Marie Was Here, Beartown, Us Against You, and two novellas, And Every Morning the Way Home Gets Longer and Longer and The Deal of a Lifetime, as well as one work of nonfiction, Things My Son Needs to Know About the World. His books are published in more than forty countries. His next novel, Anxious People, will be published in September 2020. He lives in Stockholm, Sweden, with his wife and two children. Connect with him on Facebook or Twitter @BackmanLand or on Instagram @Backmansk.

“[A] story of serendipity and the interconnectedness of all things.”
— Zoomer

“[Backman’s] writing is always compassionate and propulsive even as he asks hard questions and reveals truths about the human condition.”
— Toronto Star

“Backman’s latest novel focuses on how a shared event can change the course of multiple people’s lives even in times of deep and ongoing anxiousness. A story with both comedy and heartbreak sure to please Backman fans.”
— Kirkus Review