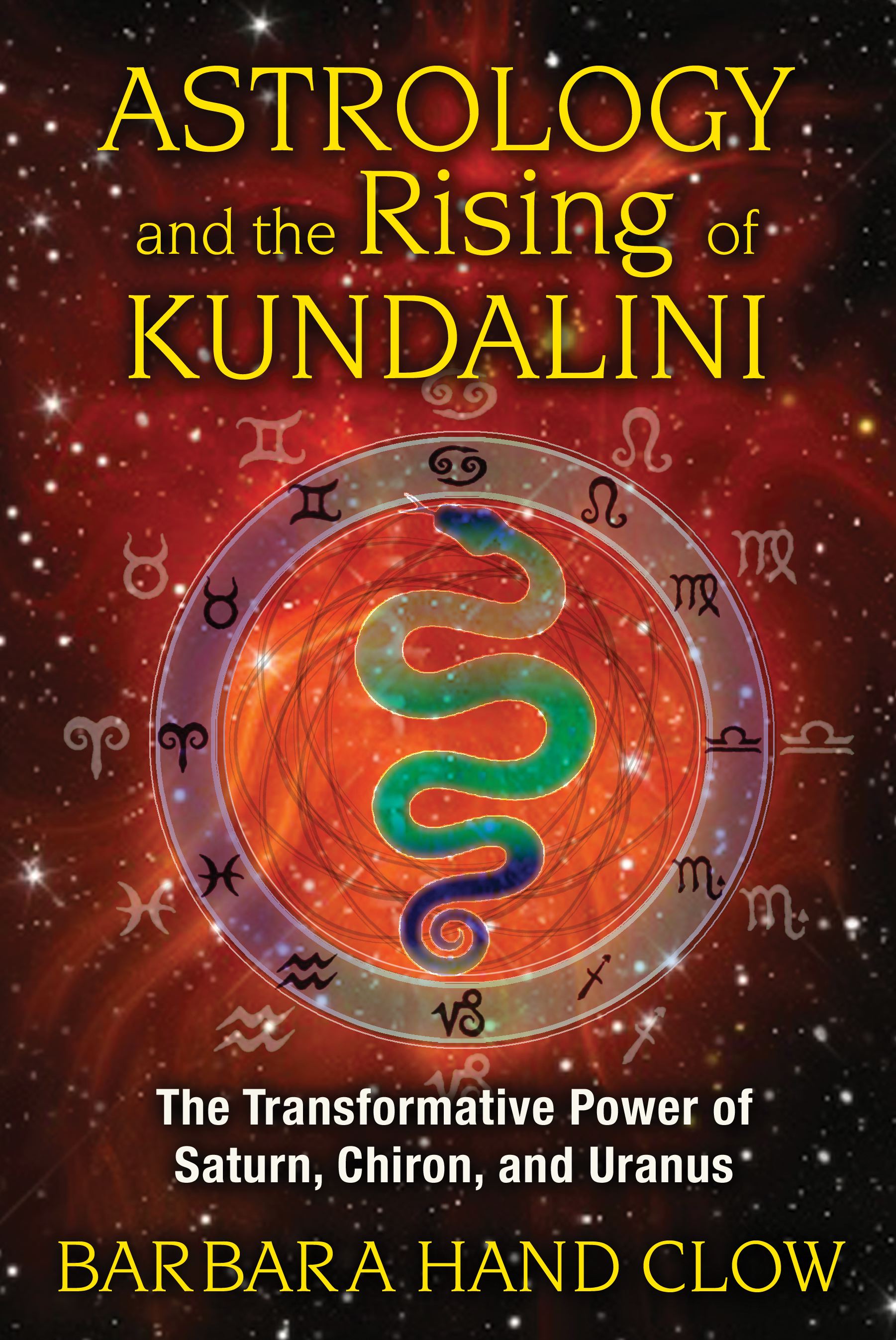 Astrology and the Rising of Kundalini

The Transformative Power of Saturn, Chiron, and Uranus

• Provides charts for the transits of Saturn, Uranus, and Chiron--now updated through 2050--to predict your personal growth cycles and timing of kundalini rising

• No astrological chart needed to use this book

In this updated edition of Liquid Light of Sex, renowned astrologer and spiritual teacher Barbara Hand Clow explores the connection between life crises in your 30s, 40s, and 50s and the key astrological passages of Saturn, Uranus, and Chiron in your birth chart. She explains how kundalini energy--the “liquid light of sex” that lies at the base of the spine--is activated during these planetary transits, rising through the chakras and triggering the process of spiritual emergency, and in many cases, a cascade of health, emotional, and relationship problems as well as extreme anxiety. She shows that by understanding these astrological transits, you can be prepared for turbulent periods and successfully navigate them by creatively channeling the spiritual fire of kundalini.

Clow provides astrological charts--now updated through 2050 for those born between 1930 and 2000--detailing the cycles of Saturn, Uranus, and Chiron, so you do not need your birth chart to use this book. She explains how to use the charts to predict the onset and completion of each kundalini activation and corresponding crisis. She shares tools for individuals and therapists to cope with the intensity of spiritual emergency and too much fire energy, unblock the chakras, and integrate the power of kundalini for physical, emotional, and spiritual growth. Reflecting on 20 years of success stories since the book’s initial publication, Clow presents a road map for using celestial cycles to navigate positively and productively in times of great life change.

CHAPTER THREE
The Saturn Principle in the Cycles of Life

SINCE SATURN GOES around the Sun every twenty-nine to thirty years, there is a first Saturn Return around age 30, a second Saturn Return at ages 58 to 60, and a third return at about 88 to 90. Obviously, our age when experiencing the various Saturn transits through each house tremendously affects the nature of the process itself, and that is what we can become much more conscious of during our second Saturn phase. At each Saturn Return, we experience the maximum pressure to conquer the weakness in ourselves that is blocking growth; we have the opportunity to pierce the resistance that is keeping us from breaking through into our greatest potential evolution.

One of my favorite Saturn stories is of Helen, who drank her way all the way through two Saturn Returns. Helen became a heavy drinker in her late twenties, and she continued to struggle with alcoholism throughout her thirties. Saturn was in her 9th house, meaning that the process she needed to master was integration of spirit, but she had a severe emotional communication block, caused by profound, unexpressed grief over the death of her mother at an early age. This block intensified her separation from spirit; communication/integration of self is the subject of the house opposite the 9th--the 3rd house.

Helen managed to avoid integration of her emotional needs at her Saturn Return by drinking whenever she needed to go deeper into herself. She drank more and more to avoid facing the intense emotional pressure that was building inside, as it always does during one’s thirties. The most intense phase of her alcoholism peaked during her Uranus Opposition, in her case at age 42. When the family realized she needed to be “fixed,” she was “cured” by a hypnotist.

Helen could have progressed to a profound level of consciousness expansion had she undergone depth therapy to help her stop repressing her grief. Instead, she experimented with hypnosis, since it was prescribed by a doctor, which simply programmed her subconscious to avoid drinking.

Helen stayed on the wagon until about age 56, when Saturn was approaching its second return. The pressure again mounted to look at her severe inner pain, and she took another drink, right at a point when she was experiencing intense emotional blockage with one of her children. The disease progressed more rapidly this time, and she attempted suicide.

As soon as the uncomfortable push of Saturn lifted, she dried up and joined Alcoholics Anonymous (AA), which made it possible for her to stop drinking, just as hypnosis had done almost thirty years previously. However, her ability to communicate has remained almost totally blocked, because she missed a second chance to master the Saturn process. The block with her own child was a potential gateway to her own inner grief, just as the initial loss of her mother could have been a bridge to the spirit world had she been able to deal with it in a healthier way by getting therapy at that time.

Saturn motivates us to learn the lessons we need in order to evolve. Whatever the purpose of our lives, Saturn creates the process we need to accomplish that purpose. Since Saturn is the taskmaster, the disciplinarian, for many the natural reflex is to resist growth--like Helen. But if we avoid Saturn’s push, we’ll abort growth, because the only way to avoid the push is to cop out--to drink, use drugs, be a ski addict, chase miniskirts, be a compulsive shopper, or become a New Age workshop junkie. Ages 28 to 31 is the best time to examine all our addictive tendencies and the lazy ways we avoid hard realities, and to make choices about how many of these patterns we’d like to transform.

The old conflict over the demands of the father versus the child’s desires tempts us all to resist the lessons of Saturn. But if we consciously employ our best powers of discipline to master the part of ourselves that we have always resisted, we will have a tool for activating our real purpose in life.

If you’ve already had a Saturn Return think about the changes you made around that time and try to intuit which house Saturn was in. See how balanced you are now on that polarity. The goal of Saturn Return is to balance all polarities so that we are able to utilize the powers inherent in all twelve sides of ourselves to achieve emotional maturation during. Let’s look at the six polarities, the questions they raise, and some applicable universal resolutions and teachings about these issues.

Polarity One: 1st and 7th Houses
The first polarity turns around the issues of self/other. Am I deeply immersed in myself and not relating to others? Or, am I so caught up in a relationship that I am not sure who I am? Resolution: merging. As you discover who you are, give all that you find to your partner. As you are immersed in the other, see clearly and deeply that you are your partner. Teaching: the Mayan saying “In Lak’etch, I’ ll Laken”--“I am yourself, you are another.”

Polarity Two: 2nd and 8th Houses
The second polarity turns around the issues of grounding and emptying. Am I stuck in a house in the midst of a fifteen‑year accumulation of possessions and feeling like I can never leave? Or, have I so let go of things I need for living that I am not grounded? Resolution: higher ethical sensitivity. Take for yourself what you really need from the Earth and enjoy all your pleasures. Let go of every single thing in your life that is not frequently needed or used. Teaching: the Native American saying “The Earth is your Mother and she freely offers to you all that you need.”
Barbara Hand Clow

Barbara Hand Clow is an internationally acclaimed ceremonial teacher, author, and Mayan Calendar researcher. Her numerous books include The Pleiadian Agenda, Alchemy of Nine Dimensions, Awakening the Planetary Mind, Astrology and the Rising of Kundalini, and The Mayan Code. She has taught at sacred sites throughout the world and maintains an astrological web site, www.HandClow2012.com

"Astrology and the Rising of Kundalini shows that when we systematically work with our life energy and the predictable cycles of time to negotiate midlife, it becomes what nature intended: not a crisis, but a power surge. Such an insight is more than an intellectual exercise; it’s essential for healthy development--the only way we can live up to our full potential. In this groundbreaking book, Barbara Hand Clow offers readers the insights, the timing, and the tools for making the passage safely, powerfully, gracefully."

– Steven McFadden, astrologer and author of Profiles in Wisdom

"Astrology and the Rising of Kundalini is an extremely important book for all who wish to turn their potentially turbulent midlife transitions into opportunities for conscious maturation and productivity. Barbara Hand Clow’s keen insight not only clarifies key passages in our personal lives, clearly defining the relationship between astrology and real-life events, she also provides vital insights into the newly developing paradigm for a healthy global future."

"Barbara Hand Clow has identified the hidden key to evolution: the rise of suprasexual energy experienced as the passion to express our full potential self through joining in love with others to create. She gives us practical guidelines to go through our personal midlife crisis to become co-creative humans, a global species at the next stage of our evolution."

– Rowena Pattee Kryder, Ph.D., author of the Gaia Matrix Oracle and founder of the Creative Harmonics

"Barbara Hand Clow helpfully provides Cliffs Notes for the midlife crisis and much, much more. This is must reading for anyone feeling midlife dissatisfaction. Her ideas can help avoid costly and unnecessary mistakes often caused by misinterpretation of a natural process of evolution. She heals by explaining deeper reasons."

"Barbara Hand Clow’s years of experience as an astrological counselor and her understanding of subtle cosmic energies have led her to draw some striking conclusions regarding the midlife phenomenon. The message in Astrology and the Rising of Kundalini is that we can move through these critical points with grace rather than confusion."

". . . completely unravels the effects of mid-life crisis . . . puts astronomy in a new light, poses interesting questions about our relationship to the rest of the universe, and provides interesting postulations about the transformations that occur in humans."

"Barbara Hand Clow presents a way to make midlife crisis both meaningful and more manageable. Her descriptions of kundalini rising are lovely and compelling. She offers a strong argument for this spiritual emergence as a universal experience, not an achievement of the very few."

"Finally! A book that makes spiritual sense out of life’s passages and does so not only on a personal level but a cosmic level as well."

"A lot of interesting astrological information is presented in a direct and accessible manner. The information is clearly written and moves from the very personal through the collective."

Astrology and the Rising of Kundalini

The Transformative Power of Saturn, Chiron, and Uranus

SEE ALL
See more by Barbara Hand Clow
Thank you for signing up, fellow book lover!