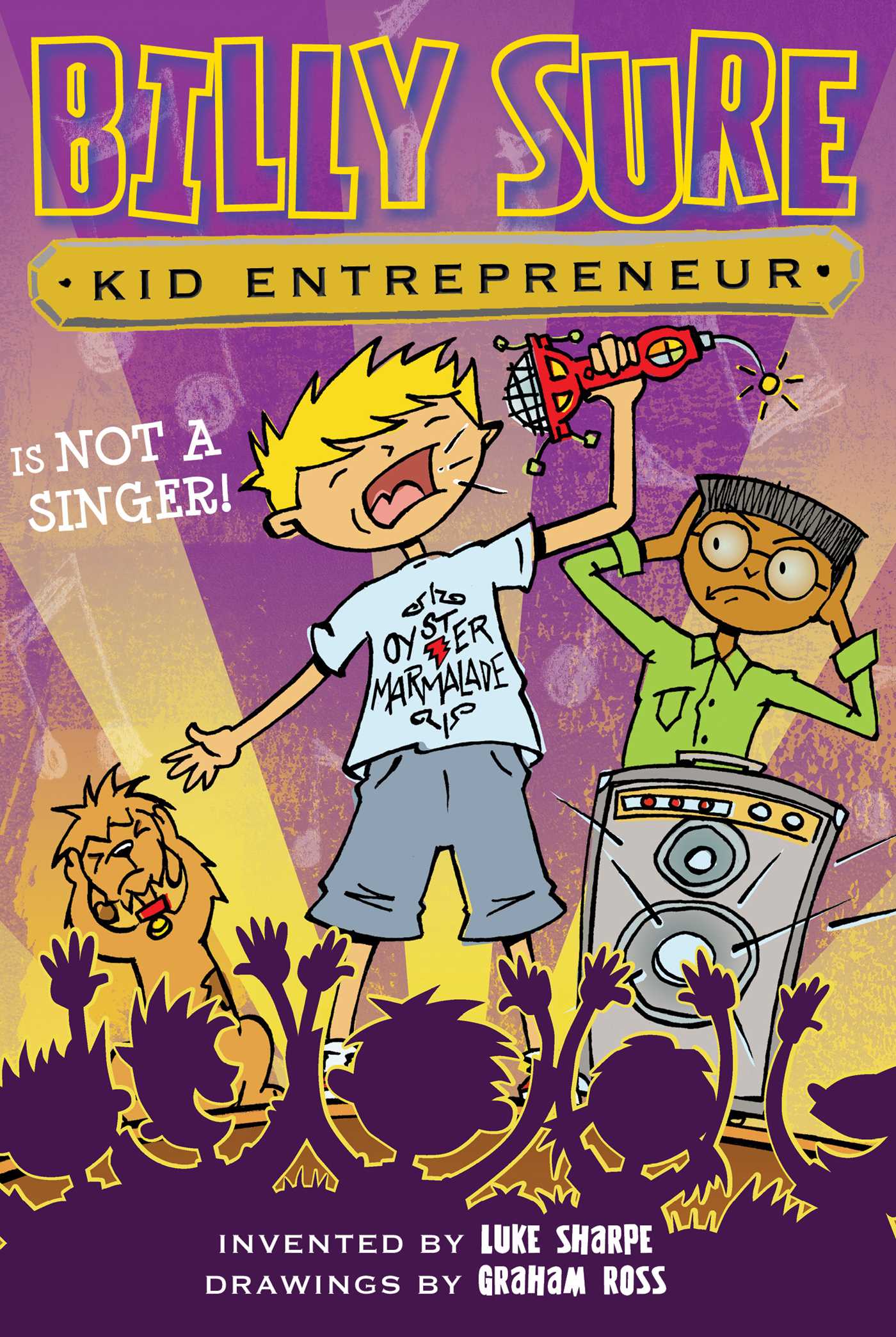 Billy Sure is an inventor, the CEO of Sure Things, Inc., and a middle school student. But he is not a singer! How bad is he? Find out in the ninth book of a hilarious middle grade series!

Everyone is talking about Billy Sure, the genius inventor and CEO of Sure Things, Inc. Billy went from ordinary kid with a dream to millionaire with his very own company when he created the All Ball. What is the All Ball? The All Ball is the only ball you’ll ever need. With a push of a button, you can turn the All Ball into any sports ball. Comes in two sizes. Large: soccer, football, basketball, volleyball, bowling ball. Small: baseball, hockey puck, tennis ball, golf ball, Ping-Pong ball. Now Billy wants to help other kids achieve their dreams.

Billy and Manny are thrilled to be guest judges on Sing Out and Shout, everyone’s favorite singing competition TV show—that is, until they find out they’re not judges, they’re contestants! When Manny sings, everyone cheers. But when Billy takes the stage, his voice CRACKS! and breaks a mirror! How will Billy survive the competition? Could inventing a Magical Microphone do the trick?

Find out in this wacky story with funny black-and-white illustrations throughout.

Def initely Sure
MY NAME IS BILLY SURE. Right now I’m sitting at my workbench at the World Headquarters of SURE THINGS, INC. Across the room—which used to be the Reyes family garage—sits my best friend and business partner, Manny Reyes. Manny and I make up Sure Things, Inc., the world’s only inventing company run by seventh graders—or so we thought.

We recently discovered that a company named Definite Devices also exists, and it is also run by two seventh graders—Nat Definite and Jada Parikh. And not only do they exist, but they were working on an invisibility invention at the same time as us at Sure Things, Inc.!

As you can imagine, that was kind of a problem. But Manny, being the genius chief financial officer (CFO) he is, worked out a deal. We all agreed to jointly release an invisibility kit produced by both Sure Things, Inc. and Definite Devices—the DEFINITELY SURE INVISIBILITY (AND ANTI-INVISIBILITY) SPRAYS.

Before our two companies agreed to work together on that one invention, Nat did her best to try to steal Manny away from me—and from Sure Things, Inc! She wanted him to work with her over at Definite Devices, because . . . well, the obvious answer is that Manny is a brilliant CFO, businessperson, marketing genius, computer whiz . . . but it’s MORE THAN THAT.

Nat has a crush on Manny!

“That is the most beautiful spreadsheet I’ve ever seen, Manny,” Nat says, her face glowing. (Oh yeah. Because we’re technically partners and all, she’s sitting at the World Headquarters now too.)

Jada, who Manny agreed to train as the CFO for Definite Devices, scrunches up her face.

“How can a spreadsheet be beautiful, Nat?” she asks. “It’s just a series of numbers and projections and—”

“Anything Manny does is beautiful,” says Nat.

See what I mean?

“So, Jada,” Manny begins, doing his best to ignore Nat, “as you can see, we’ve placed the sprays in a few high-end specialty stores.”

“Exactly,” Manny replies. “So by the time we release it to the major chains—”

“—people will be waiting in line to buy it,” Jada finishes.

Just then a noise comes from Manny’s phone.

“Looks like we have another incident of someone using the Definitely Sure Invisibility Spray to cut a line,” Manny says, frowning. “Last week someone used it at a movie theater. Now in a theme park.”

“That’s not good,” I say. Then I get an idea. “Maybe the next batch of sprays can make kids who try to cut lines grow REALLY BIG ELEPHANT TRUNKS! Temporarily, of course.”

I might be imagining it, but I think he emphasizes the word “partner” so that Nat and Jada notice.

“All right, that’s enough work for today,” Manny adds with a smile.

I think what Manny really means is, You should go home now, Nat.

Nat frowns. But she can’t complain, because she has been here for hours. She and Jada pack up and leave.

I’m just about to do my best Nat imitation a few minutes later, (“Manny, you are so, so funny!”) when Briiiiing! Briiiing! My phone rings. I don’t recognize the number.

I pick up the phone, hoping it has nothing to do with Definite Devices. Don’t get me wrong—I’m happy there are other kids out there who are working on their dreams. I’ve just kind of had enough of them for today.

“Hi, Billy?” comes a voice through the phone.

“Is this a good time to talk?” she asks, pronouncing every syllable clearly in a British accent. “It’s Gemma Weston.”

She’s only the most famous movie star in the whole world!
Luke Sharpe

Luke Sharpe is not a millionaire, but he has been trying to invent a machine that can teleport people anywhere in the world since he was eight years old. He has so far been unsuccessful but he has vowed never to give up. When he isn’t working, Luke enjoys Hawaiian pizza and skateboarding. He lives near Chicago with his wife and son (named Billy, of course), their gecko, Eddie, and their aquarium full of exotic fish.

Graham Ross has grand plans for world domination through his illustrated inventions. Right now he’s having a “ball” hanging out with Billy Sure, the next sure thing! Graham lives in a little log home in the woods with his inventive family, just outside of Merrickville, Canada.