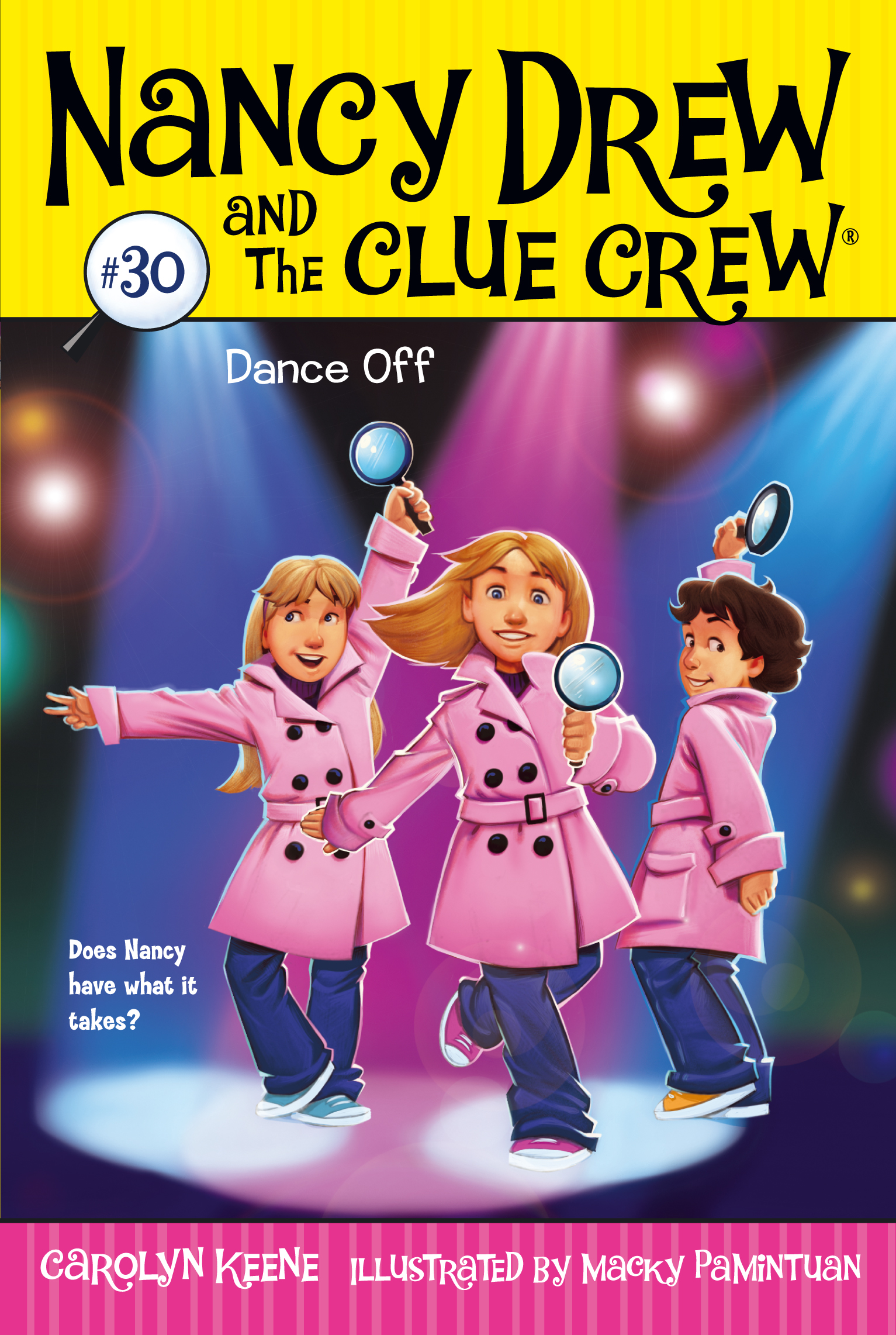 Dance fever has hit River Heights! Kids Can Dance, the famous reality tv show, is holding auditions at River Heights Elementary. Nancy and her friends are eager to try out, and meet the famous host, Bryce Brown. But when something goes wrong with every dancer's equipment, music, or routine, could someone be trying to ruin the River Heights try-outs? Nancy Drew and the Clue Crew are on the case!

Dance Off CHAPTER ONE
Fans and Cancans

“Why do we have to wear these goofy pink coats?” George Fayne asked. She frowned at the vinyl coat draped over her arm. “What detectives walk around in these?”

The Clue Crew never wore pink trench coats when they worked on their cases. But the coats and giant magnifying glasses were the perfect costume for their big dance number.

“Who cares if they look funny or squeak when we move?” Nancy asked her two best friends. “We’re about to audition for Kids Can Dance!—one of the hottest shows on TV!”

Nancy squealed along with Bess. Fourteen-year-old Bryce Brown was the singing, dancing star of the girls’ other favorite show, Middle School Meltdown. He was also one of the judges for the auditions.

“And a one-thousand-dollar check,” Bess added. She turned to George. “What would you do with the prize money?”

Bess heaved a sigh. She and George were cousins but different in every way. Bess had blond hair, blue eyes, and fashion-forward clothes. George had dark hair and eyes and the coolest computer gadgets and gizmos. George didn’t mind being called a computer geek as long as she wasn’t called Georgia—her real name!

Nancy, Bess, and George hurried down River Street toward the River Heights Spotlight Theater. That’s where the auditions would be held for the next few days.

It was only Thursday, and the girls weren’t auditioning until Sunday. But everyone had to bring their costumes and music to the theater that afternoon.

“Remember, Clue Crew, no mysteries until the auditions are over,” Nancy said. “We have to—”

“Nancy!” Bess cut in as she looked back over her shoulder. “We’re being chased by a giant ice-cream cone!”

“Huh?” Nancy turned around and gasped.

Sure enough, a giant ice-cream cone with arms and legs was racing toward them yelling, “Wait up! Wait up!”

Henderson’s dad drove the Mr. Drippy ice-cream truck. But that did not explain the ice-cream costume.

“Where are you going looking like that?” Nancy asked.

“Same place you are!” Henderson answered. “I’m trying out for Kids Can Dance!”

Henderson’s shoes tapped on the sidewalk as he danced for the girls. He then lifted his foot to show the steel tap on the bottom of his shoe.

“It’s my dad’s idea,” Henderson sighed. “He needs the prize money so he can buy a pretzel truck for the winter.”

“Because it’s too cold to sell ice cream?” Nancy asked.

Henderson nodded and said, “My dad needs a job badly.”

“Good luck, then!” Bess said before George jabbed her with her elbow. “I mean, good luck—but I hope we still win.”

The brown brick theater with the marquee was only a few steps away. Practicing their dance numbers outside were many kids Nancy knew from school. Some wore their costumes over their street clothes just like Henderson did.

A group of fifth-grade girls wore cheerleader uniforms as they shook colorful pom-poms and practiced their splits. A few feet away Kendra Jackson, from the girls’ third-grade class, kicked her leg under a long, ruffled skirt.

“Speaking of cans, check that out,” George said.

“You already take the cake!” George shouted back.

Nancy pulled George away from the boys. She refused to let the two biggest pests at school spoil an awesome day.

“I wish my dad could watch us audition,” Nancy said, flipping her reddish blond bangs aside. “I wonder why parents aren’t allowed.”

“Because the show is afraid they’d be too pushy,” George explained. “Like some stage moms and dads can be.”

“Like her,” Bess whispered. She pointed at a tall, blond woman wearing a white pantsuit. “That’s Cookie, Bryce’s mom-ager.”

Cookie was arguing loudly with another woman standing near the theater door.

“Bryce has just landed a part in a huge movie!” Cookie was shouting. “He must fly to Hollywood—ASAP!”

“He has a contract,” the other woman said.

“Mindy, you’re the producer of Kids Can Dance!,” Cookie huffed. “Release him from his contract this instant!”

Cookie’s eyes narrowed as she said, “Oh, you’ll be sorry, all right!”

Whoa, Nancy thought. I hope Bryce is a lot nicer than his mom.

Mindy turned away from Cookie to open the theater door. She first made the kids line up, then led them into the theater. They were directed backstage, where they hung up their costumes. George stood on tiptoes as she put their dance music CD on a shelf with the others.

“Do you think somebody will steal our pink coats?” Bess asked as they left the back room.

The girls found three seats next to one another and sat down. From there they could see the judges’ table set in front of the stage. But where were the judges?

“Hi, kids!” Mayor Strong called out as he walked out on the stage. “Who’s ready to kick it up?”

Cheers filled the theater. Nancy shivered with excitement. This was it!

A smiling Ivy waved as she ran onto the stage. She walked down to the judges’ table, still waving.

Nigel hardly looked at the kids as he joined Ivy at the table. He wasn’t smiling, either.

“Last but not least,” Mayor Strong announced, “you know him from Middle School Meltdown—Bryce Brown!”

Nancy squeezed Bess’s hand as they shrieked too. Running onto the stage was the star himself—Bryce Brown!

“He’s cuter in person than he is on TV!” Bess squealed, practically digging her nails into George’s arm.

Bryce was wearing a Middle School Meltdown jacket and faded jeans. “Who’s ready to burn the floor?” he shouted.

A louder scream answered Bryce’s question. But nobody was screaming louder than Ivy! “I didn’t know Ivy liked Bryce too,” Nancy said.

“Then why is she screaming?” Bess asked. George gulped and then said, “Because there’s something big, gray, and furry under that table!”
Carolyn Keene