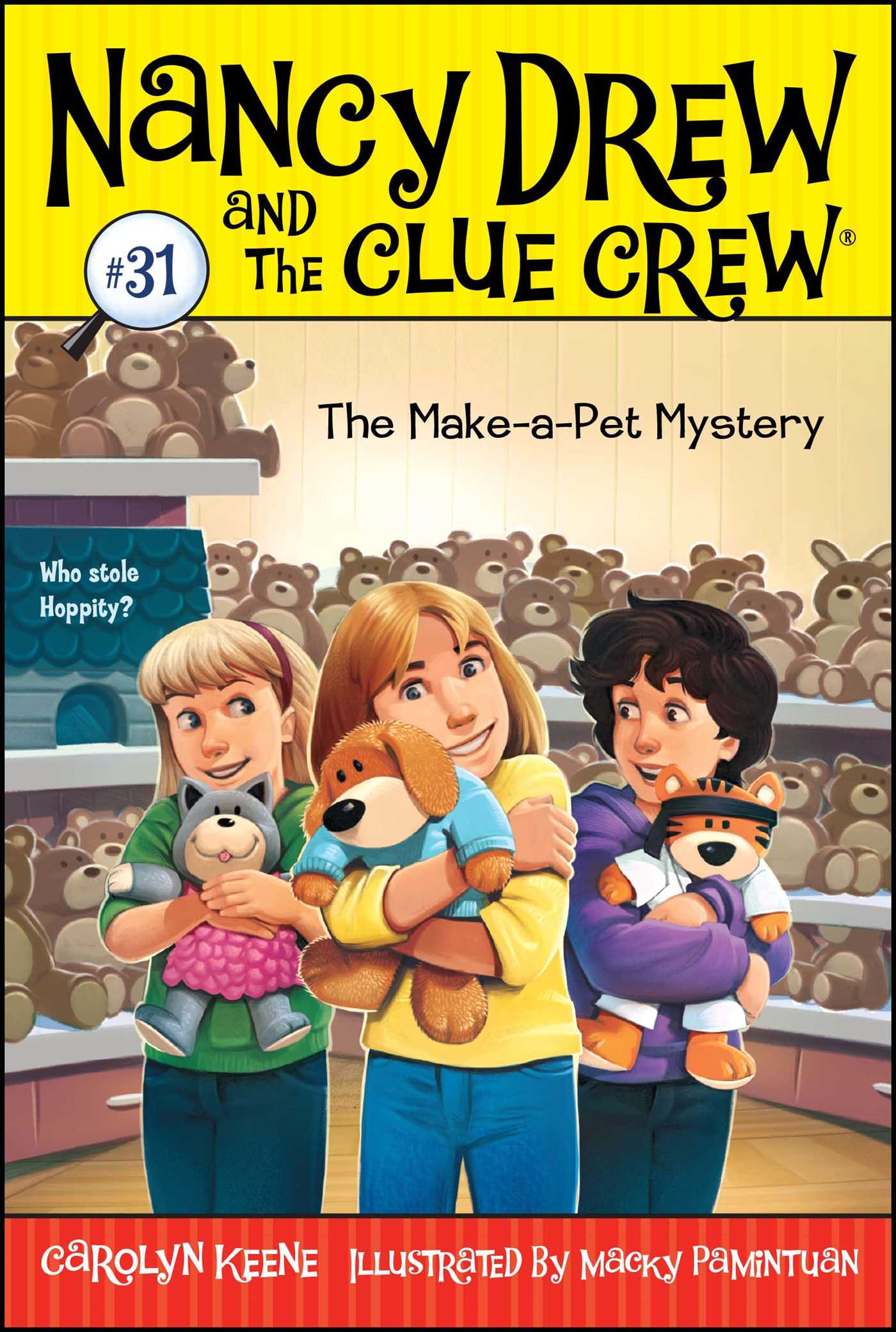 Nancy Drew and the Clue Crew are out to solve the case of a stolen stuffed animal.

River Heights has gone gaga over Make-a-Pets! Nancy and her friends are excited to make their own cuddly stuffed animals—and play the online game Petopia that goes along with Make-a-Pet animals.

But when Nancy’s friend, Violet, discovers that Hoppity, her Make-a-Pet, is missing, the Clue Crew is called on to help find the missing bunny. It seems there are a few possible suspects—including Violet’s best friend, Sonia, who claims Violet stole the idea about Hoppity from her. Could Violet’s best friend be the culprit? Or is the real thief even more of a surprise?

“I can’t wait to make my very own puppy,” Nancy Drew declared as she headed into the main entrance of the River Heights Mall. She pulled off her hat and mittens and stuffed them into her coat pockets.

“And I can’t wait to make my very own kitty,” Bess Marvin piped up. She did a little twirl as she followed behind Nancy. “She’s going to be the most beautiful kitty in the world!”

“Well, I can’t wait to make my very own tiger,” Bess’s cousin, George Fayne said. “I already have a name for him: Furrrocious!” She held up her hands on either side of her head, pretending to have big tiger ears.

The three best friends were on their way to a new store at the mall called Make-a-Pet. They had been saving their allowance money for ages so they could each buy—actually, create—their very own Make-a-Pet.

Hannah Gruen had come along with the girls. Hannah worked as a housekeeper for Nancy and her father, although to Nancy she was more like a mother than a housekeeper.

“Hmm, maybe I should make one of these stuffed animals too. They sound like fun,” Hannah said, tucking her car keys into her purse.

“It’s not a stuffed animal, Hannah. It’s a Make-a-Pet!” Nancy corrected her.

Inside the mall, Nancy paused to figure out where they were going. “Over there!” she said eagerly, pointing to a storefront on the other side of the fountain. The sign said make-a-pet in different-colored letters. Each letter had a different animal on top of it, including a hopping frog, a waddling duck, and a slithering snake. The snake made Nancy shiver a little.

Bess grabbed Nancy’s and George’s hands and pulled them toward the store.

“No running!” Hannah called after them. “Don’t worry, we have plenty of time to make pets before we get pizza!”

Pizza! Normally, Nancy would have been superpsyched about going out for pizza. But right now she was so excited about their Make-a-Pet project that she could hardly think about food—or anything else.

The inside of the Make-a-Pet store was even more fun and colorful than the sign out front. There were shelves full of puppies, kitties, and other animals dressed up in cool outfits. There were lots of tables, too, with kids making their own pets similar to the ones on the shelves. Nancy wasn’t sure where to start.

“Are you here to make a pet?” a young woman asked the three girls in a friendly voice. She wore jeans and a red T-shirt with the Make-a-Pet logo. Her name tag read TABITHA.

“Yes!” Nancy, George, and Bess said at the same time.

“Do you all know what kind of pet you’d like to make?” Tabitha asked them.

Nancy raised her hand. “A puppy!”

While Hannah wandered around the store, Tabitha led Nancy, Bess, and George to the first workstation, which had a sign above it that said: step 1, pick your pet! There, they picked out a shell for their pets, which was the outside part with no stuffing inside. Nancy’s puppy was cute and brown, like her real puppy back home, Chocolate Chip. But without its stuffing, the puppy looked kind of flat, like a fuzzy sweater.

“Don’t worry, we’ll get your pets fattened up right away,” Tabitha told them. She led them to the second workstation, which had a sign above it that read step 2, fill up your pet! Tabitha had to help them with this step, which involved hooking their pets’ shells up to a special machine. Within minutes Nancy’s puppy was a cuddly stuffed animal that she could squeeze and hug. She couldn’t believe it!

At the third workstation—dress your pet!—Nancy and her friends ran into some girls they knew: Deirdre Shannon, Madison Foley, and Kendra Jackson, who were in their third-grade class at school.

“Hey, it’s the Clueless Crew!” Deirdre exclaimed. “Are you working on a case? What’s it called? The Mystery of the Ugly Cat?” She pointed to Bess’s kitty and cracked up.

“Well, my Make-a-Pet is way cuter,” Deirdre bragged. She held up a lavender mouse. It was wearing a fancy purple dress covered with glittery rhinestones. “Isn’t her outfit awesome? It’s the most expensive one in the store!”

George rolled her eyes and turned to Madison. “I like your turtle,” she said.

“Thanks,” Madison said. Her turtle was dressed in an orange baseball jacket and cap.

“Thank you,” Kendra said. Her pony was dressed in a red satin jacket and matching bow tie.

The three girls, along with Deirdre, Madison, and Kendra, moved on to the fourth and final workstation, which was the name your pet! station. There they all filled out their pet’s names and birth dates for their pets’ birth certificates.

Nancy decided to call her puppy Mocha Chip, since it sounded kind of like Chocolate Chip. Bess named her kitty Itty Bitty. George stuck to Furrrocious for her bear.

Deirdre chose Squeak Squeak for her mouse. Madison picked Myrtle the Turtle, and Kendra settled on Prancer for her pony.

Bess filled out Itty Bitty’s birth certificate with a sparkly pink pen, dotting the two i’s with little hearts. “This is superfun!” she exclaimed.

“This is superdumb!” someone muttered.