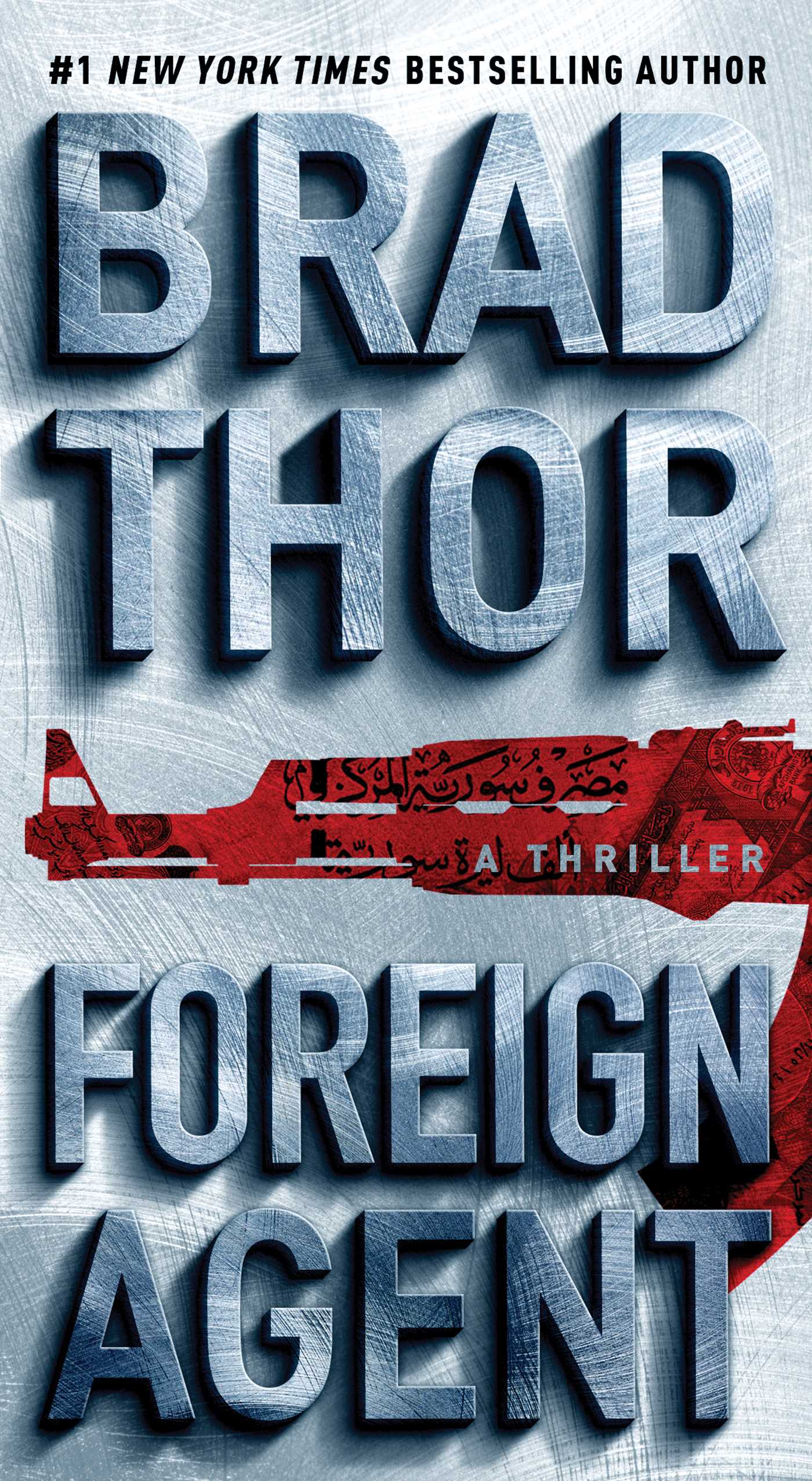 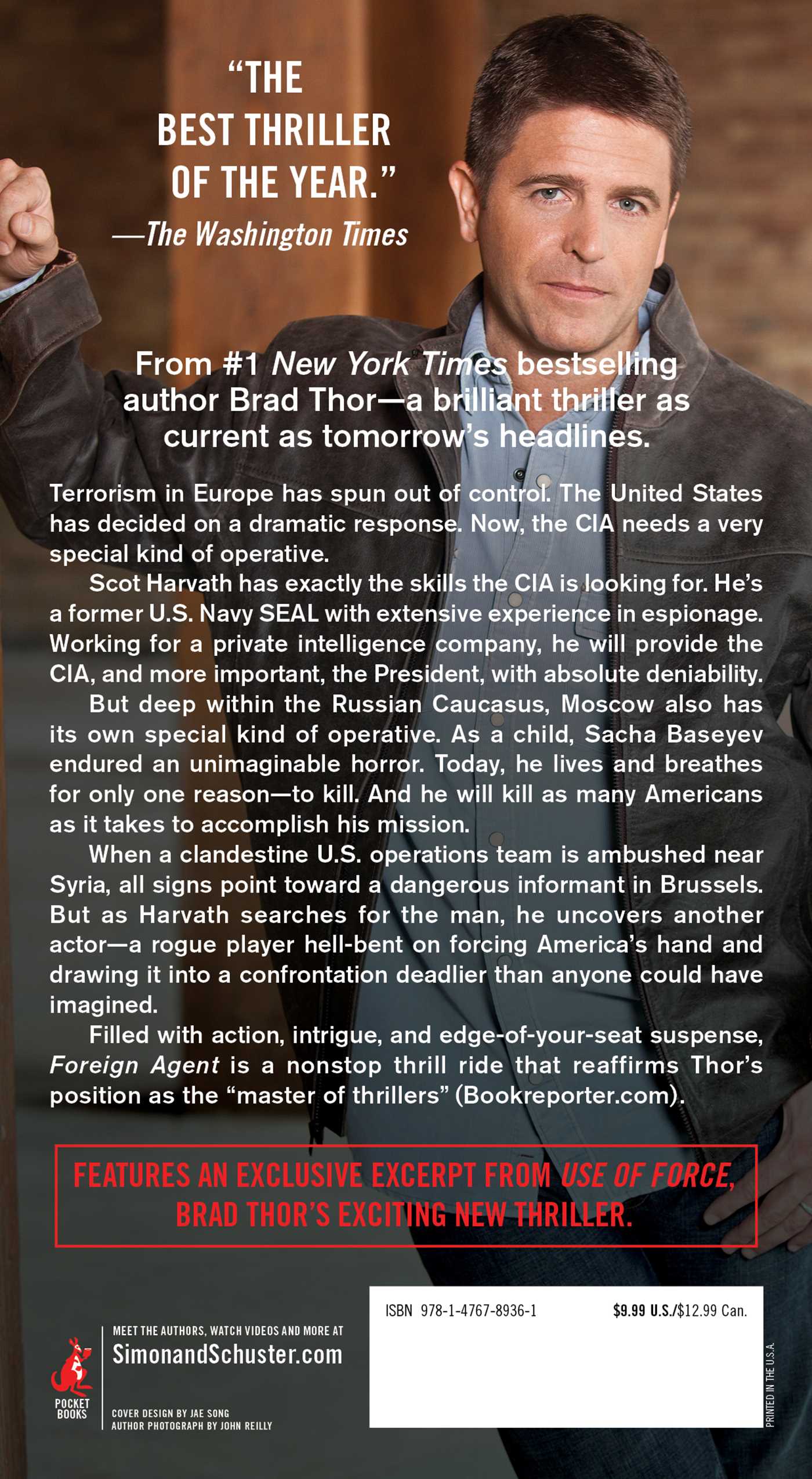 “The best thriller of the year...an exciting and entertaining read.” —The Washington Times

Scot Harvath has exactly the skills the CIA is looking for. He’s a former US Navy SEAL with extensive experience in espionage. Working for a private intelligence company, he will provide the CIA, and more important, the President, with absolute deniability.

But deep within the Russian Caucasus, Moscow also has its own special kind of operative. As a child, Sacha Baseyev endured an unimaginable horror. Today, he lives and breathes for only one reason—to kill. And he will kill as many Americans as it takes to accomplish his mission.

When a clandestine American operations team is ambushed near Syria, all signs point toward a dangerous informant in Brussels. But as Harvath searches for the man, he uncovers another actor—a rogue player hell-bent on forcing America’s hand and drawing it into a confrontation deadlier than anyone could have imagined.

As the attacks mount, and terror is brought to the very doorstep of the White House, Harvath finds himself in the race of his life. From Vienna, Brussels, and Berlin, to Malta, Jordan, and Syria—he will push himself beyond the edge in order to confront one of the greatest evils the world has ever known.

Filled with action, intrigue, and edge-of-your-seat suspense, Foreign Agent is a nonstop thrill ride that reaffirms Thor’s position as the master of thrillers.

At six-foot-four, two hundred seventy-five pounds, Ken Berglund was a massive sight to behold. He had a thick, blond beard and sleeves of tattoos up both arms. “T-bones are almost ready,” he called out.

A cheer arose from his teammates in the courtyard and from the women who had gathered around the old stone slab being used as a dining table. Someone fired up a Charlie Daniels song on their iPhone as more beers were pulled from the cooler.

It was a perfect night for a cookout. Above the abandoned desert fortress, the stars shone in the blue-black sky, a cool breeze blew away the lingering heat of the day, and for a moment you could almost forget where you were.

That was until you noticed the modified M4 rifles kept within arm’s reach, or the .45-caliber pistols the men carried at their hips. As soon as you saw those, the illusion was shattered. Nobody gunned up that heavy for dinner unless they were in a war zone. Which was exactly where they were.

Ashleigh Foster, though, had downplayed the danger when she spun the trip to her two girlfriends as something out of Lawrence of Arabia—a weekend at a romantic desert castle surrounded by nothing but sand and the occasional camel. Of course, as a CIA collection management officer, she knew better. Stationed at the U.S. embassy in Amman, Jordan, she saw the intelligence on a daily basis. In fact, it was her job to sort it, encrypt it, and send it all back to CIA headquarters in Langley, Virginia.

No place in Iraq was safe—and that went double for Anbar. ISIS may not have pushed this far into the province yet, but it was only a matter of time.

Her girlfriends knew better too. As embassy staffers, they were kept up to speed on the security situation not only in Jordan, but also in neighboring Iraq and Syria. What they were doing was dangerous.

But danger had been part of the weekend’s appeal. It was an adventure, and adventures were supposed to be exciting. And what could be more exciting than partying at a CIA safe house for two nights?

They had snuck out of work early on Friday, stopping back at their apartments only long enough to pick up their clothes and four enormous Yeti coolers (borrowed from an Embassy storage room) filled with all sorts of food, including steaks, ice cream, beer, and even doughnuts.

With a carefree attitude better suited to a trio of college coeds headed off on spring break, they hopped into Ashleigh’s Toyota Land Cruiser, turned up the music, and pointed the SUV toward the Karameh/Turaibil border crossing.

Less than three hours later, they flashed their diplomatic passports and were waved through both the Jordanian and Iraqi checkpoints. Just beyond, Ashleigh’s boyfriend and two of his teammates were waiting.

He and his six-man team had been sitting in the crumbling desert fortress for over a week, waiting for the CIA to green-light their insertion into Syria to snatch an ISIS HVT, or high-value-target.

Berglund’s team was already running low on supplies when Langley informed them that the target had changed locations again and there’d be another delay. The CIA wanted to keep the target under surveillance for a few days to see who he was meeting with. They’d decide what to do after that.

Hurry up and wait. It was par for the course for operators. If Langley wanted to delay this mission, that was their decision.

In the meantime, though, Berglund had made a decision of his own. Why not make their resupply a little more interesting?

He and Ashleigh hadn’t seen each other in months. When he asked her, she jumped at the chance. As long as she hit the road by Friday prayers, she’d be all right. There wasn’t much to worry about between Amman and the border. She’d have her weapon with her, and if she needed to rock out with her Glock out, she could hold her own.

Her father, who was ex-military, had taught her how to shoot at an early age. On top of her extensive CIA training, she practiced continually and took great pride in outshooting any man dumb enough to underestimate her.

It was one of the many things Berglund loved about her. Not only was she this hot, south Florida stunner, she was also her own woman—unafraid, unapologetic, and unaffected by who or what other people thought she should be.

Her father, though, had his own plans for her. He hadn’t wanted her getting anywhere near the Middle East, and had exerted great pressure to keep her back in the United States. But, Ashleigh being Ashleigh, she had found a way to get what she wanted.

She always did, which concerned Berglund. While they’d gotten naughty a lot over FaceTime, he was worried she’d eventually need it in the flesh and find it, either at the Embassy or somewhere else in the diplomatic community.

The thought of her with some Eurotrash diplomat, or God forbid, some Ooh Rah embassy Marine, was more than the former Ranger could stand. Any rules he was breaking by bringing her out to the desert were worth it.

But, as is often the case, one bad decision normally leads to another.

The idea of steaks and pretty girls had appealed to the other men on the team, and so two of Ashleigh’s friends had been invited as well.

As far as the operators were concerned, what happened downrange stayed downrange. There was no reason anyone at Langley needed to know.

Berglund turned his attention back to the T-bones, giving them a final ninety-degree rotation to sear perfect crosshatch marks into the meat—a technique he had learned one summer in college working at a steakhouse in Dallas.

It was going to be an epic meal. Ashleigh had even laid her hands on the ingredients for a wedge salad. If only all of their deployments could be like this.

When the steaks were ready, he stacked them on a plate, slung his M4, and headed toward the table. His helmet, mounted with night-vision goggles, sat in a row with the others.

Berglund was only halfway there when he heard the high-pitched whistle of an inbound mortar. Dropping the steaks, he raced toward the others yelling, “Incoming! Get down! Get down!”

Brad Thor is the #1 New York Times bestselling author of twenty thrillers, including Near Dark, Backlash (one of Suspense Magazine’s Best Books of the Year), Spymaster (“One of the all-time best thriller novels”—The Washington Times), The Last Patriot (nominated Best Thriller of the Year by the International Thriller Writers Association), Blowback (one of the “Top 100 Killer Thrillers of All Time” —NPR), and The Lions of Lucerne. Visit his website at BradThor.com and follow him on Facebook at Facebook.com/BradThorOfficial and on Twitter @BradThor.

"The best thriller of the year...an exciting and entertaining read."

"Rocks from page one … I didn’t put it down until the last page. If you are a fan of Brad Thor, this book is one not to miss.”

"Foreign Agent is without a doubt the best thing hitting bookstores this summer. Buy it and move it straight to the top of your to-read list, it’s that good.”

“An adrenaline ride through labyrinthine worlds of espionage and international intrigue.”

"Foreign Agent is Thor’s best yet.”

"Make sure you clear your calendar before you start… it’s impossible to put down.”

"Thor’s most complex and ambitious entry in the series yet, ushering him onto the hallowed ground of literary thriller master John le Carré... A classical hybrid that combines the traditions of both Alistair MacLean and Frederick Forsyth."