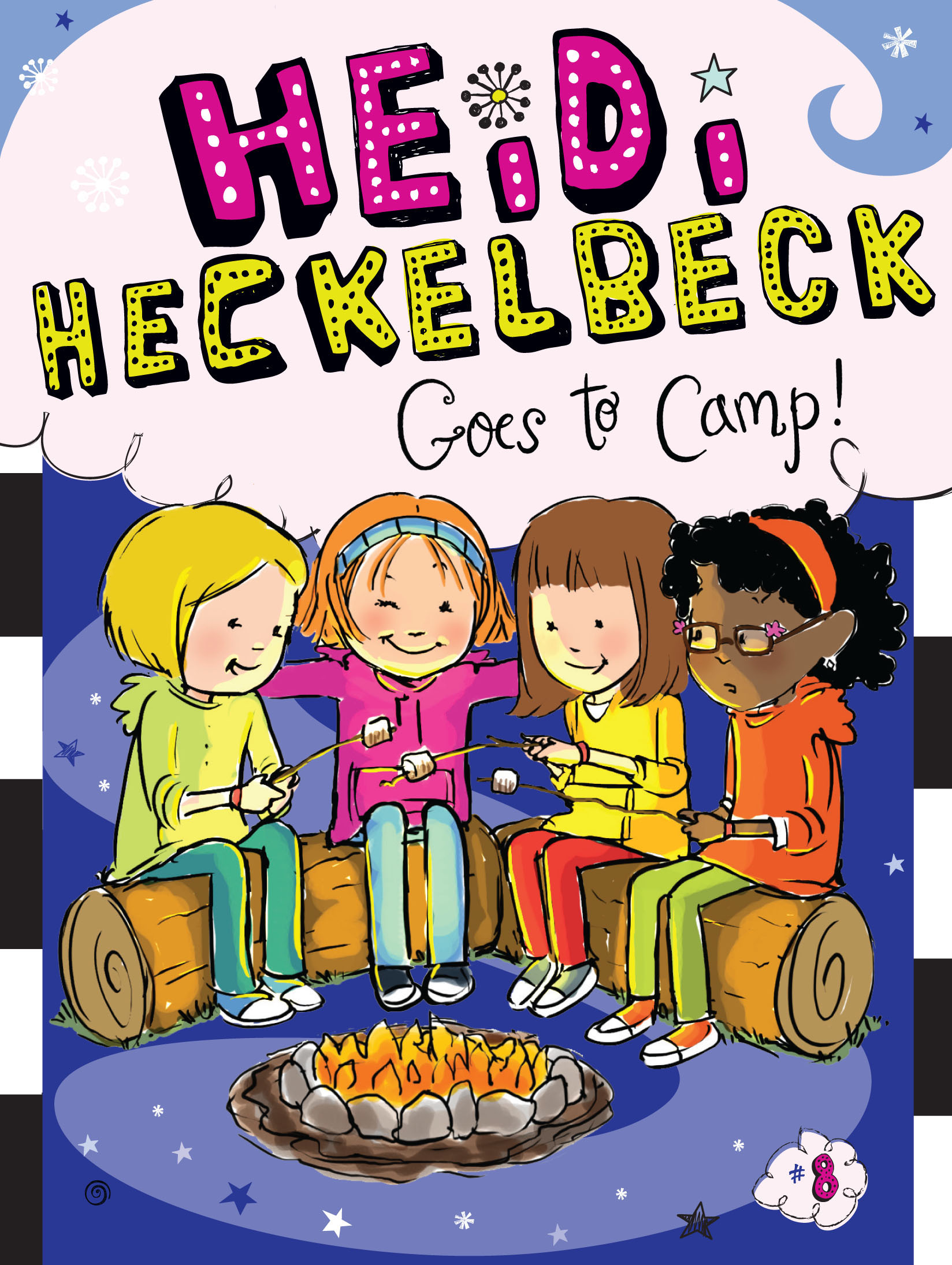 When Heidi has trouble making friends at camp, she discovers that courage can be even more powerful than magic!

Heidi can’t wait to go to camp with her friend Lucy, but when they get there, Lucy’s camp friends from last year make Heidi feel unwelcome. At first Heidi uses her Book of Spells to help her win their friendship, but in the end she decides to be brave and ask the girls why they don’t like her. Heidi is surprised by their answer…and by the time camp ends she has made two new friends!

With easy-to-read language and illustrations on almost every page, the Heidi Heckelbeck chapter books are perfect for beginning readers.

“It also means you have camp spirit,” said Dad.

“Well, I have oogie da boinga too,” said Henry. “So why can’t I go to sleepaway camp?”

“Because you’re a SHRIMP,” Heidi said.

“Soon Henry will be old enough for sleepaway camp too,” Mom said.

“And so will this evening if we don’t hop to it,” said Mom.

Heidi and her best friend, Lucy Lancaster, were leaving for Camp Dakota in the morning. Lucy had gone to Camp Dakota last summer. Now Heidi and Lucy would get to go together for two whole weeks!

Heidi’s clothes lay in piles on her bed. Mom had ironed name tags on to all of Heidi’s belongings.

“Now all I need are my tap shoes and a laundry bag.”

Heidi grabbed the shoe box from the shelf in her closet. She had tried tap in the school talent show, but that didn’t count because she had used a tap-dancing spell. Now she wanted to learn for real.

Mom took one last look at the packing list. “I’ll get you a laundry bag from the linen closet,” she said.

As soon as Mom left the room, Heidi thought of something else she wanted to pack—something super-important. She kneeled on the carpet and pulled her keepsake box out from under the bed. She opened the box and took out two things: her Book of Spells and her Witches of Westwick medallion. Mom would never allow me to take these, thought Heidi. But what if there’s an emergency?

Heidi looked up and listened for her mom. Then she lifted a stack of clothes and carefully tucked her Book of Spells and medallion at the bottom of the trunk. She patted down her clothes as Mom walked back into the room.

“That’s it,” said Mom, tossing a laundry bag to Heidi. “You’re all packed for camp.”

Then she shut and latched her trunk.

Wanda Coven has always loved magic. When she was little, she used to make secret potions from smooshed shells and acorns. Then she would pretend to transport herself and her friends to enchanted places. Now she visits other worlds through writing. Wanda lives with her husband and son in San Jose, California. They have three cats: Hilda, Agnes, and Claw-dia.

Priscilla Burris has illustrated numerous books for children, parents, and teachers. She enjoys cake painting and creating art for products that include murals, greeting cards, and rubber stamps. Priscilla lives with her family in Southern California.