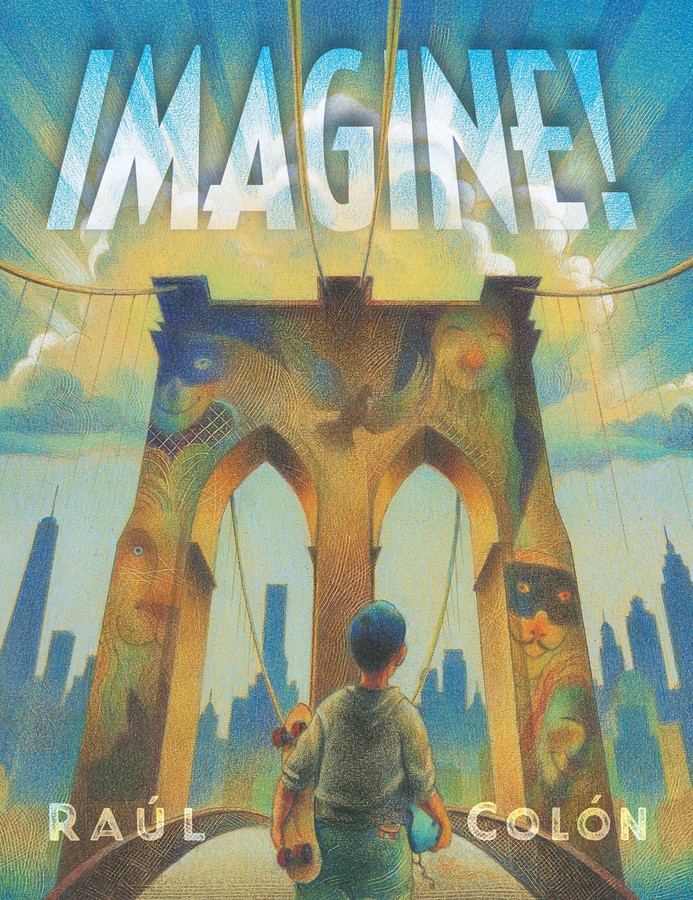 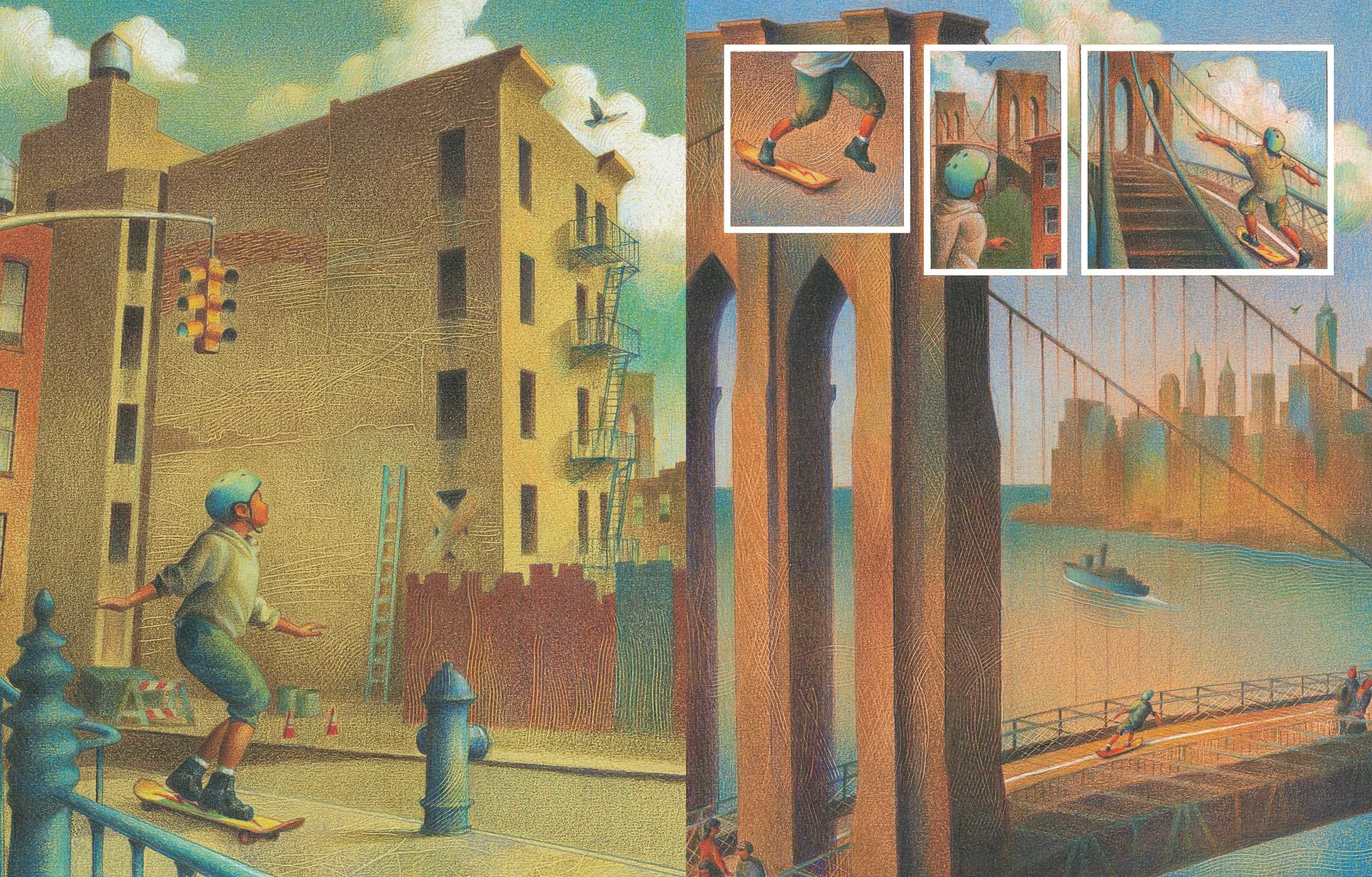 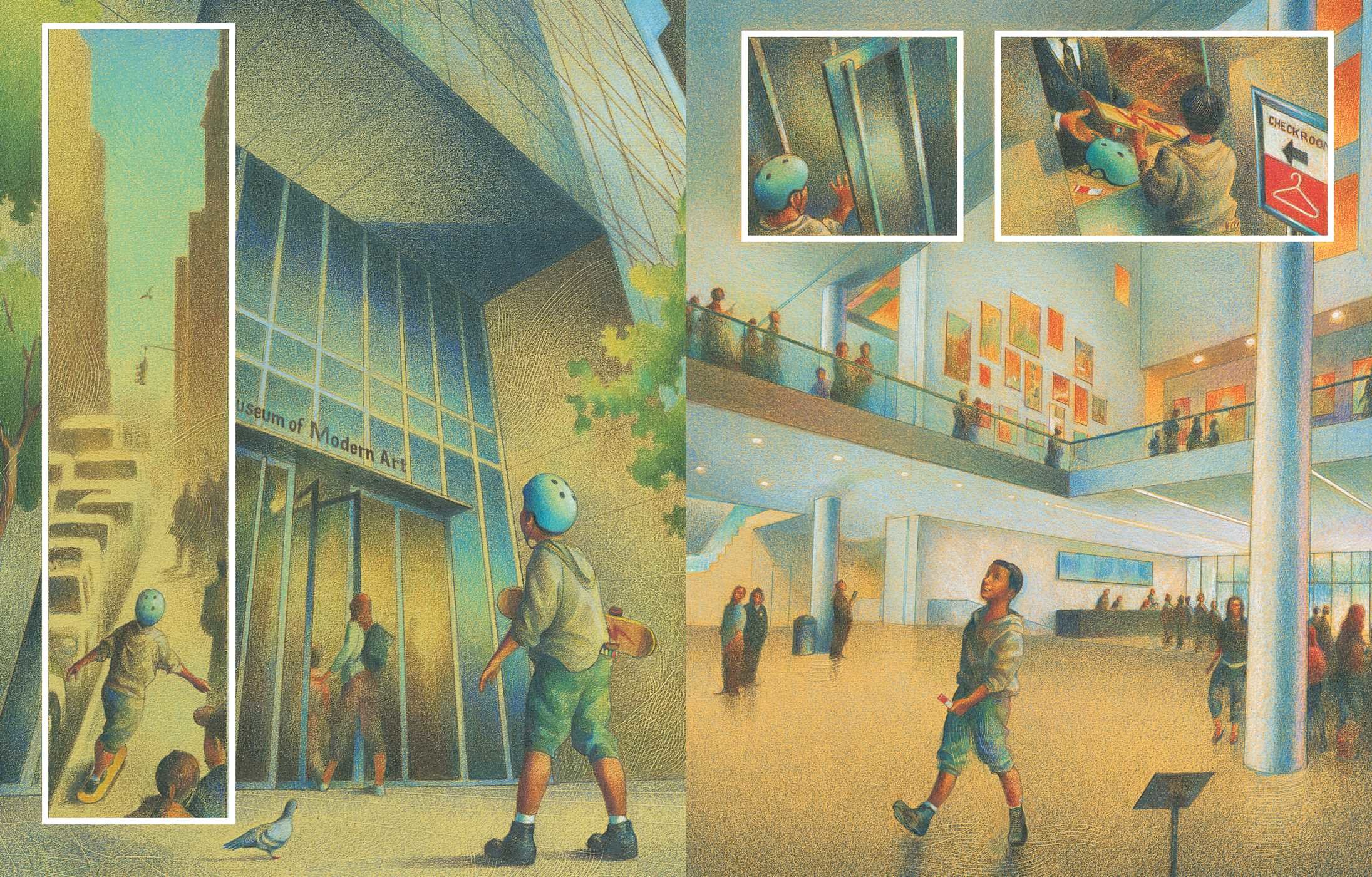 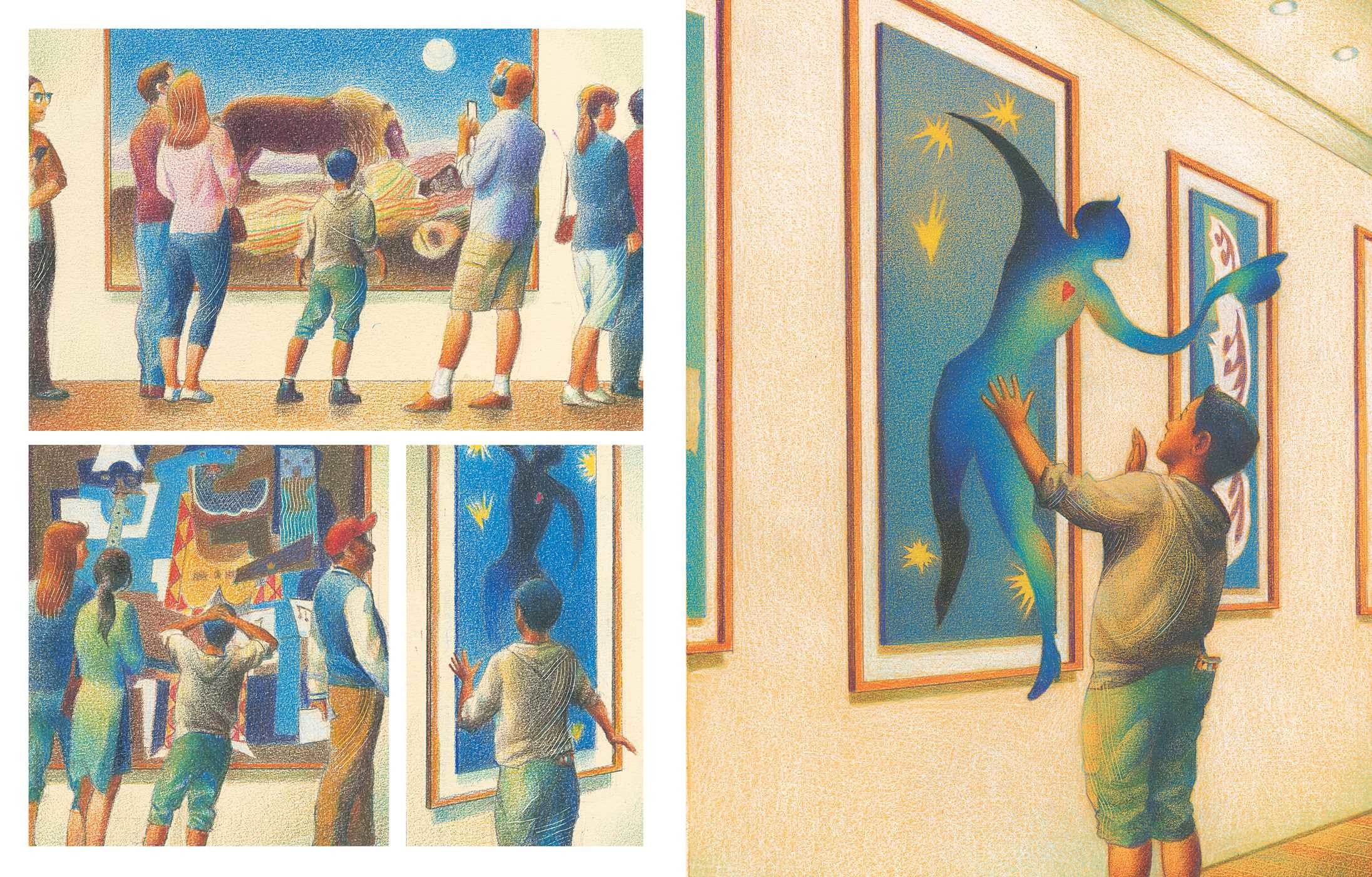 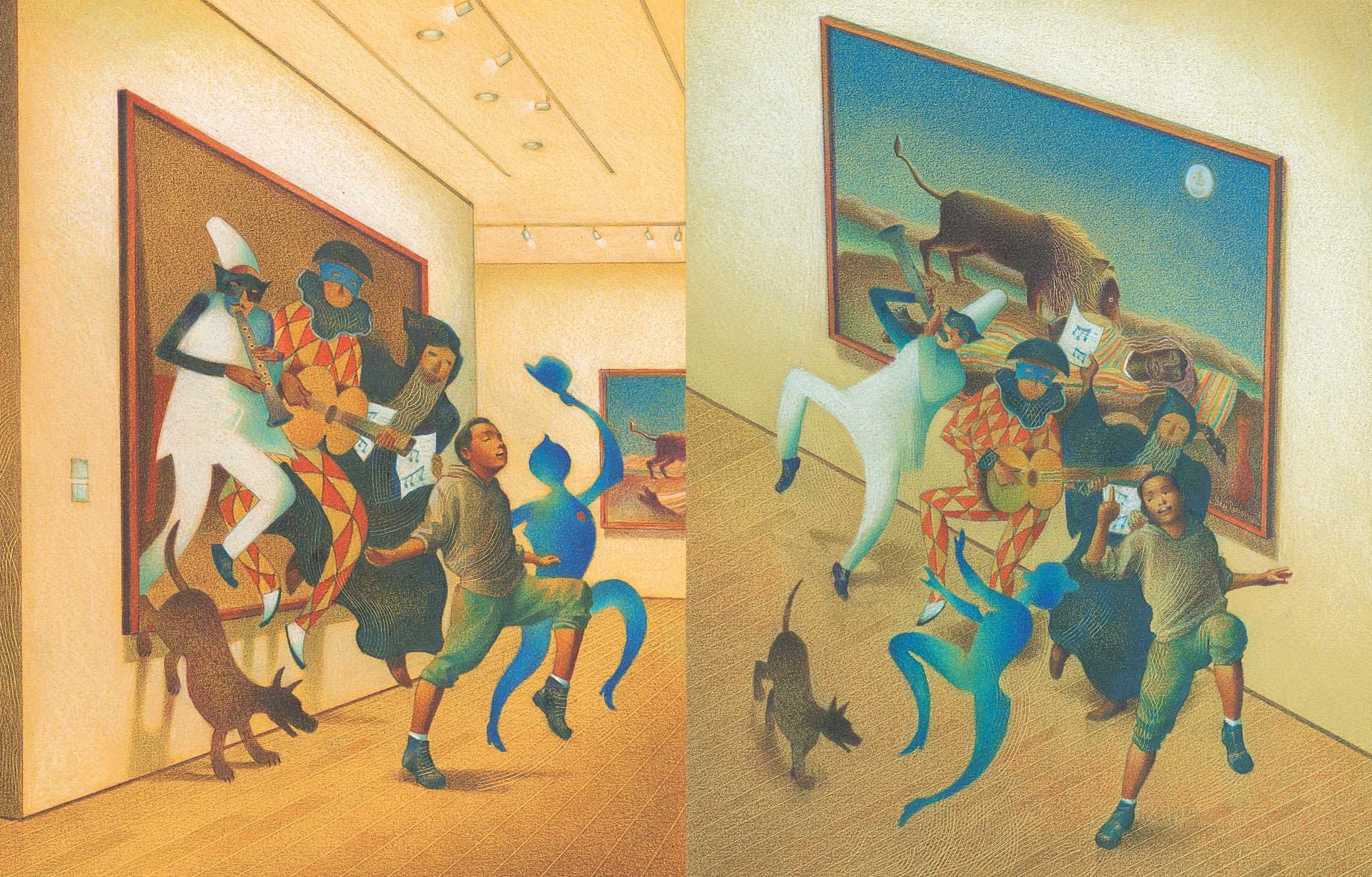 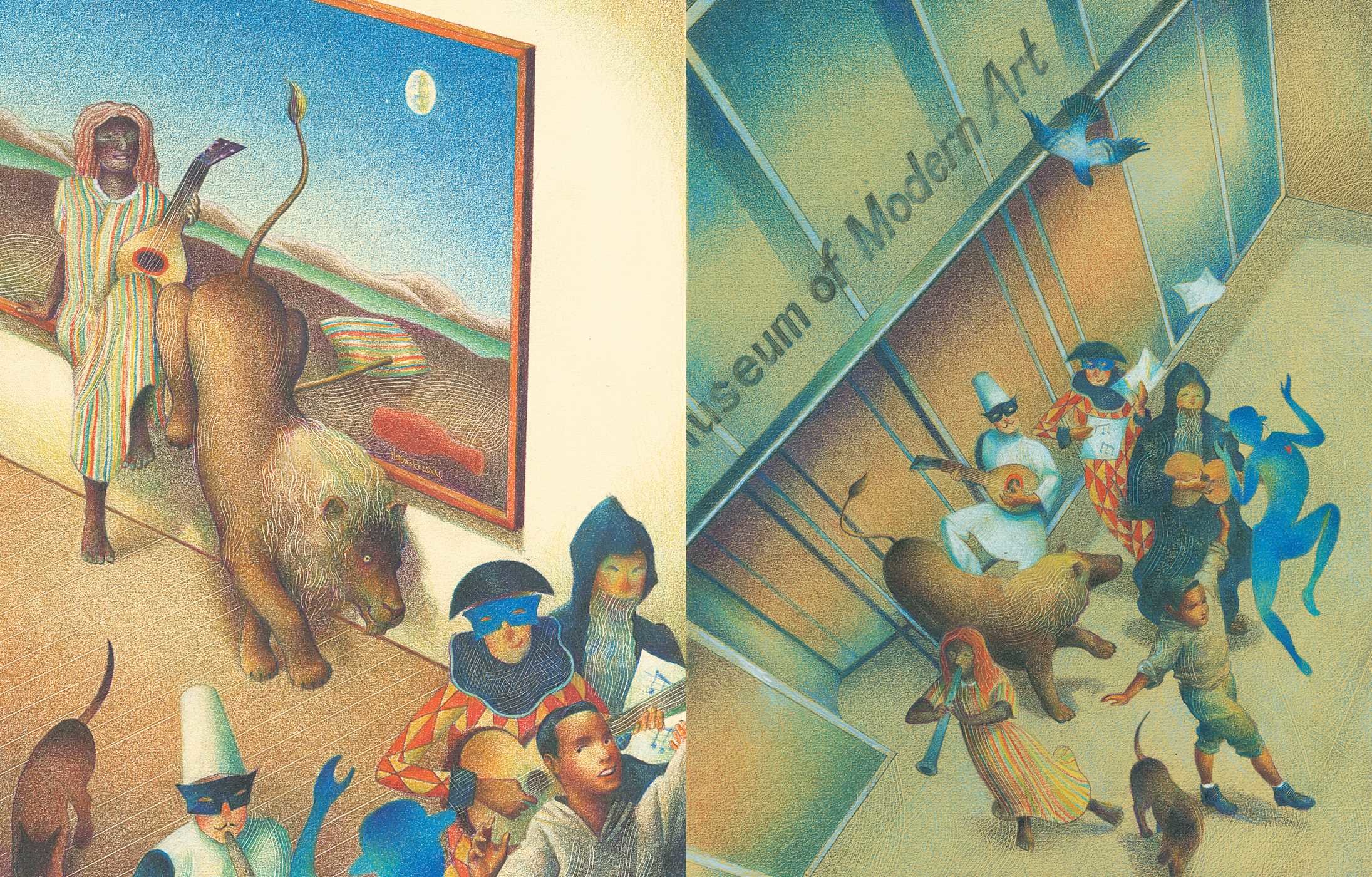 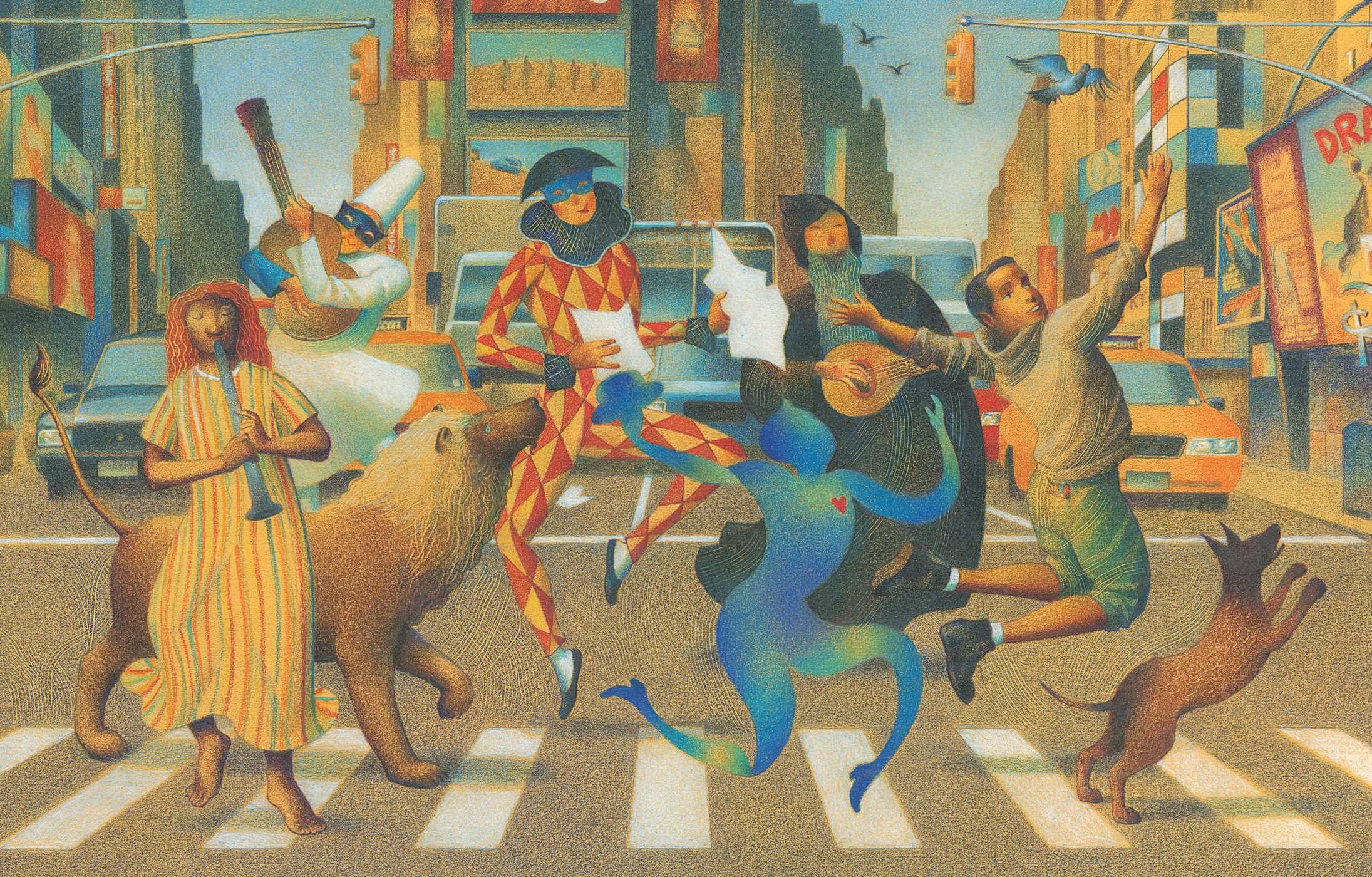 “This fine book provides not only exposure to art…but also an example of a boy—a boy of color, a boy in America—with a passion for fine art.” —The New York Times

“The prosaic world of the city boy we meet…is transformed into a realm of wonder not by a quirk of quantum physics but by exposure to fine art.” —The Wall Street Journal

“Captures the drama of a personal artistic experience and the lasting impact it can have…compelling…an irresistible invitation to creativity.” —School Library Journal (starred review)

“A delightful wordless tribute to the arts with a magical touch.” —Booklist (starred review)

Six starred reviews for New York Times bestselling artist Raúl Colón’s wordless picture book about a visit to the museum and the power of art and imagination, which “hums with and jubilation” (The Horn Book, starred review).

After passing a city museum many times, a boy finally decides to go in. He passes wall after wall of artwork until he sees a painting that makes him stop and ponder. Before long the painting comes to life and an afternoon of adventure and discovery unfolds, changing how he sees the world ever after.

The images in this book are unforgettable. —Paula W., VP and Publisher on Imagine

* A brown-skinned boy, living in a New York City borough, rides his skateboard into Manhattan to visit the Museum of Modern Art for the first time. After viewing several revered paintings, the boy’s inspired imagination enables him to enter one of the pictures and then lead the characters out of three separate works of art. He and seven of the images, including a dog and a lion, dance out of the museum. They all spend the day experiencing some New York City highlights, such as the Statue of Liberty and the Coney Island Cyclone roller coaster, eating hot dogs from a street vendor and having a sing-along in a park. Colón’s signature colored pencils and watercolor scratchboard-style illustrations bring the magical adventure to life. Rich colors and textures create paintings readers will want to spend time studying. References to famous artists and their work are sprinkled throughout: Matisse’s Icarus conjures up a hat when emerging from his frame, the flat, angular shapes of Picasso’s Three Musicians become rounded and animated and Rousseau’s The Sleeping Gypsy awakens to join the fun. The author/illustrator has combined his love of music and illustration to create a delightful wordless tribute to the arts with a magical touch. — Booklist, starred review

*"In Colón's newest wordless tribute to creativity, a young child kindles his imagination during an art museum visit. A boy (gendered in the author's note) emerges onto the city street with a skateboard in hand. The young skateboarder drifts through the city and over a bridge, ending up at the Museum of Modern Art. Inside, he surrenders his skateboard at a checkroom and strides into the museum. Similar to his previous reflection on imagination, Draw! (2014), Colón's latest again challenges readers to discover inspiration through ingenious means. Wonder fills the boy's face as he observes the artworks adorning the museum walls, including Pablo Picasso's Three Musicians, Henri Rousseau's The Sleeping Gypsy, and Henri Matisse's Icarus. When the larger-than-life characters from these paintings break free from the canvas and join him, the boy and his newfound company dance their way out of the museum and onto the streets of New York City. What follows is a series of merry adventures sweeping past familiar landmarks like Times Square and the Statue of Liberty. Inspired by the author's museum experiences, the story leaps off every page thanks to the textured artwork brimming with buoyant body movement and cast in muted colors and striking patterns. It's over all too soon. A few goodbyes back in the museum, and the boy goes on his way, stopping briefly to leave his mark on the city's walls. Beautifully euphoric." Kirkus, starred review

*"Though Colón (Draw!) grew up in New York City, he didn’t visit the city’s art museums until he was an adult. The powerful idea of encountering original modern masterworks as a child, his author’s note says, inspired this wordless fantasy. Using the deeply saturated hues and combed textures of his signature style, the artist draws a brown-skinned boy hopping onto his skateboard, sailing across the Brooklyn Bridge, and heading into the Museum of Modern Art, checking his helmet and board at the entrance. Inside, he encounters Rousseau’s The Sleeping Gypsy, Picasso’s Three Musicians, and Matisse’s Icarus. He’s awed by the paintings—Colón draws him with his hands clasped behind his head—and is overjoyed when the figures burst from their frames. After dancing with the boy out onto the street, they tour famous New York landmarks together—fast-moving stills show the figures in improbable N.Y.C. settings with humorous believability—before returning to the museum. Back in Brooklyn, the figures remain in the boy’s mind, and he creates some magnificent art of his own. Colón’s vibrant scenes make it clear that visiting works of art can breathe magic into the everyday and inspire further creativity afterward."-- Publishers Weekly, starred review

*"A young boy skateboards across the Brooklyn Bridge to the Museum of Modern Art in Manhattan. There he encounters works by some of the most famous artists in the collection: Rousseau, Picasso, and Matisse. The enchanting figures leap off their canvases and join the boy on a tour of the Statue of Liberty, Central Park, Times Square, and Coney Island before returning to their frames. On his way home, the newly inspired child envisions painting murals on the sides of the buildings he passes and falls asleep with his head filled with the images he’s internalized. In an author’s note, Colón explains that he never saw original art in museums as a child, but was overwhelmed with emotion when he encountered the paintings as an adult. His wordless picture book captures the drama of a personal artistic experience and the lasting impact it can have. The paintings he represents in his subtly textured pencil, lithograph, and watercolor illustrations are recognizable to those who know them and captivating even for those meeting them for the first time. ­VERDICT A compelling introduction to the power of art and an irresistible invitation to creativity, to boot. Best shared one-on-one or with a small group, with plenty of time to pore over the brilliant images within.–School Library Journal, starred review

*"A boy leaves a row house with his skateboard and rides through his unidentified urban neighborhood; readers can almost immediately orient themselves as he crosses the Brooklyn Bridge and arrives at the Museum of Modern Art in Manhattan. From here Colón’s latest wordless picture book (Draw!, rev. 9/14) becomes a love letter to the experience of visiting an art museum: as the (brown-skinned) boy marvels at Matisse’s Icarus (identified in an author’s note), the cutout figure peels itself from the painting to dance with him, its lithe limbs swaying with movement over the next several pages. They’re joined by the trio from Picasso’s Three Musicians, then by the lion and just-awakened woman from Rousseau’s The Sleeping Gypsy (these three works all capably mimicked by Colón). Rendered in watercolors and Prismacolor- and lithograph pencils, with his signature stippled and crosshatched textures, Colón’s illustrations hum with energy and jubilation as the characters cavort through NYC, ride the Coney Island Cyclone, play music
in Central Park, etc. The boy’s new friends return to their canvases, but when he returns to his neighborhood he copies their likenesses onto a blank wall, creating a mural, and dreams of them at night. In the appended note, Colón informs readers that he never visited an art museum until he was an adult. Imagine! is his entreaty to expose children to art: “Maybe their minds will explode and fireworks will go off and floodgates will open…Imagine that!” -- The Horn Book Magazine (starred review)

Raul Colón's (Bookjoy, Wordjoy) Imagine! is a joyful, wordless exploration of artistic discovery.
As a young boy leaves his apartment, helmeted and with a skateboard under his arm, a journey of possibilities begins. He rides his skateboard through a series of paneled spreads, bringing him past hallmarks of big-city living. Muted beige buildings and bridges--destined, we later find out, to be canvases for more vivid colors--are illustrated with great attention to depth, with Colón's use of Prismacolor and lithograph pencils creating fingerprint-like designs in the watercolor art.
Upon reaching his destination, New York City's Museum of Modern Art, the boy checks his wheels and enters a new world. More panels show the boy's intensity as he encounters different artists and their work, but when Henri Matisse's Icarus literally leaps off the walls, the real fun begins. The boy dances and sings his way out of the museum with Icarus and a parade of figures from Pablo Picasso's Three Musicians and Henri Rousseau's The Sleeping Gypsy. As the art breaks free of its frames, Colón's illustrations move from paneled scenes to full-page spreads, showing the jubilant group riding the subway, eating hotdogs and hanging out in Central Park.Although these activities are seemingly mundane (especially to New York City residents), they give voice and make visual the experience of finding wonder and community in art. Colón's author's note gives background on his own experience with museums and provides names for the artists and artworks in the book, adding layers for exploration for anyone who cares, or dares, to imagine more. --Breanna J. McDaniel, author, freelance reviewer, SHELF AWARENESS, starred review

Discover: Imagine! by Raul Colón is a vibrant tribute to the power of art and the pull of an iconic city.

SEE ALL
See more by Raúl Colón
Thank you for signing up, fellow book lover!