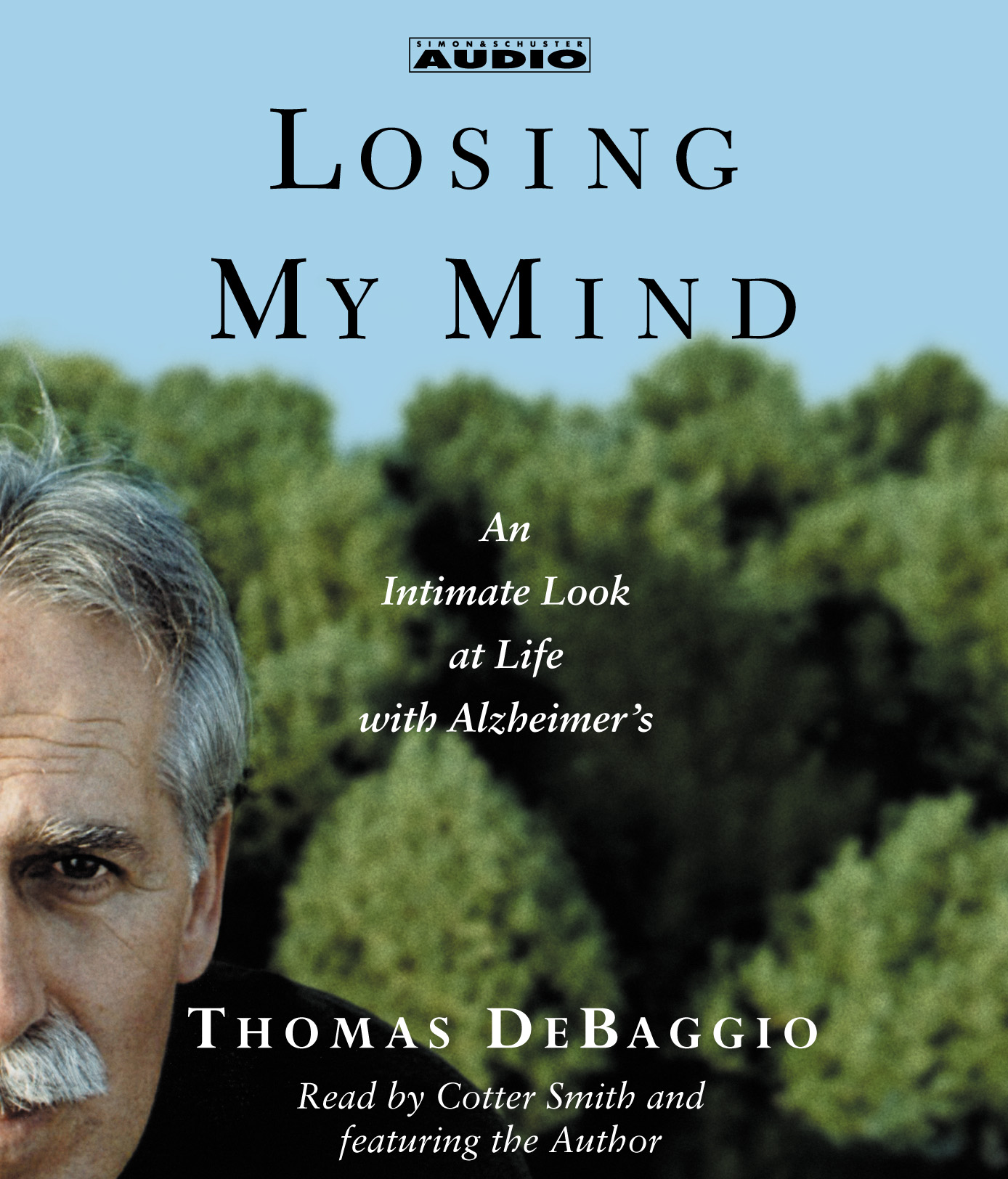 When Tom DeBaggio turned fifty-seven in 1999, he thought he was embarking on the golden years of retirement -- time to spend with his family, his friends, and the herb garden he spent decades cultivating.
One winter day, he told his doctor during a routine exam that he had been stumbling into forgetfulness. After it subsequent battery of tests, DeBaggio joined the legion of twelve million others afflicted with Alzheimer's disease.
Losing My Mind is an extraordinary first-person account that charts the ups and downs of early onset Alzheimer's -- a form of the disease which can he particularly ravaging to younger, more alert minds. DeBaggio started writing on the first day of his diagnosis and has continued despite his slipping grasp on his memory.
DeBaggio paints a vivid picture of the splendor of memory and the pain that comes from its loss. DeBaggio poignantly depicts one of the most important parts of our lives -- remembrance -- and how we tend to overlook it. But to DeBaggio, memory is more than just an account of a time long past, it is one's ability to function, to think and ultimately, to survive. As his life is reduced to moments of clarity, the true power of thought and his ability to connect to the world shines through.
A testament to the beauty of memory, Losing My Mind is more than just an account of Alzheimer's, it is the captivating story of one man's battle to stay connected with the world.

DISCUSSION GUIDE
Thomas DeBaggio, Losing My Mind
Synopsis
In Losing My Mind: An Intimate Look at Life with Alzheimer's, Thomas DeBaggio records in heartbreaking detail an experience that few have recounted and no one hopes to share: the onset of Alzheimer's disease. Diagnosed one beautiful spring day at the age of 57, longtime journalist DeBaggio initially viewed the condition as a death sentence, but also knew he had a story he ought to tell. While keeping up with his family-run herb and plant business, he began work on his new project immediately, writing in his journal to capture the personal angle and researching the latest scientific information on a still poorly understood disease. This book is the devastating result.
Discussion Questions
1. As he says in the Author's Note, DeBaggio weaves three distinct threads into this narrative. One records his memories from early childhood onward, another relates the present-day frustrations of the disease, and the last collects bits and pieces of the latest Alzheimer's research. Rather than treating these subjects in three separate sections, he alternates between them rapidly, creating a complex texture. What is the effect of this technique? Did you notice any interesting juxtapositions?
2. One of the most poignant aspects of the book is the use of short italicized quotations from DeBaggio's journal -- dispatches from his most personal thoughts. One reads simply, "This may be my last chance to dream." [p. 7] Why are these remarks so moving? Do they ever remind you of your own privately held feelings?
3. The author writes, "depressed patients often complain that they're unable to concentrate or remember things, while those with dementia are generally unaware of any mental problems." And yet, DeBaggio himself seems painfully aware of his own ever-increasing lapses, at least initially. Does this change over the course of the narrative? Do you think his experience of the disease is uniquely self-conscious and insightful?
4. Sometimes DeBaggio quotes directly from his doctors' notes, which are often chillingly clinical. An early excerpt reads, "Mild dementia versus age-related memory loss plus anxiety. Supect the former, rule out the latter. Rule out treatable cause." [p. 23] Do these quotations square with other medical experiences we all may have had?
5. "For me now, any question of identity becomes profound and difficult. Without memory you lose the idea of who you are." [p. 42] These two sentences succinctly capture what is so terrifying about Alzheimer's; if you could not remember your first kiss or your last address or your wife's name, would you still be you? Does DeBaggio's personality seem to change or even dissolve over the course of these 200 pages?
6. Losing My Mind has passages that are repeated at times, particularly in the second half. Do you think this is intentional? Note, for example, the repetition of the experience of lying in bed watching a light show of yellow images, or the memory of finishing reading The Catcher in the Rye and going out in search of "phonies." What is the effect of these echoes in the text?
7. Growing herbs and plants in his backyard, DeBaggio's life is bound with nature, and attentive to its dramas. Does an understanding of natural processes influence the author's writing style? Does it influence his experience of Alzheimer's?
8. DeBaggio cites a 1999 study estimating that "nearly half of all people age 85 and over have symptoms of AD" [p. 13], a truly shocking finding. Do you think this book will be valuable to the generation that is now growing into old age? Is it valuable to those who will never have Alzheimer's?
Thomas DeBaggio

SEE ALL
See more by Cotter Smith
Thank you for signing up, fellow book lover!