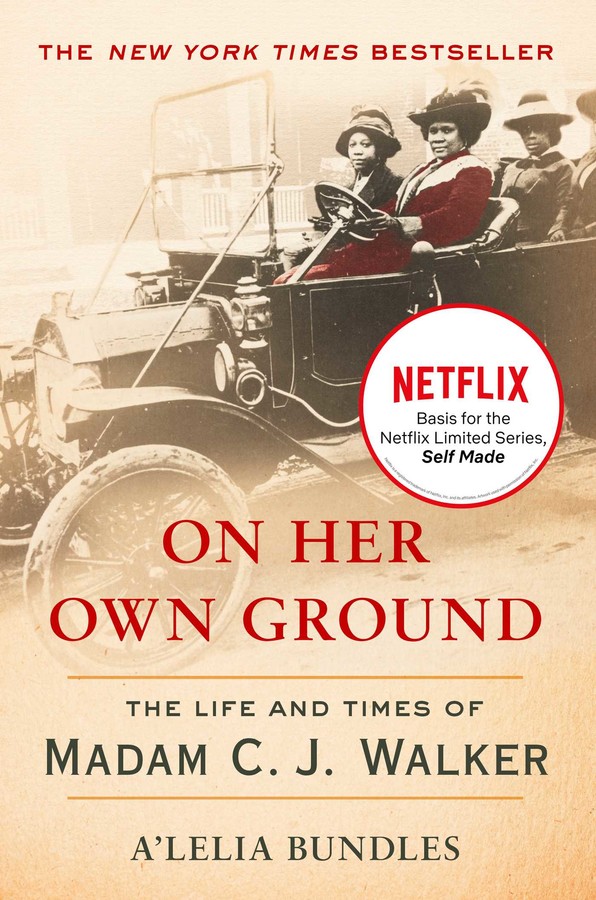 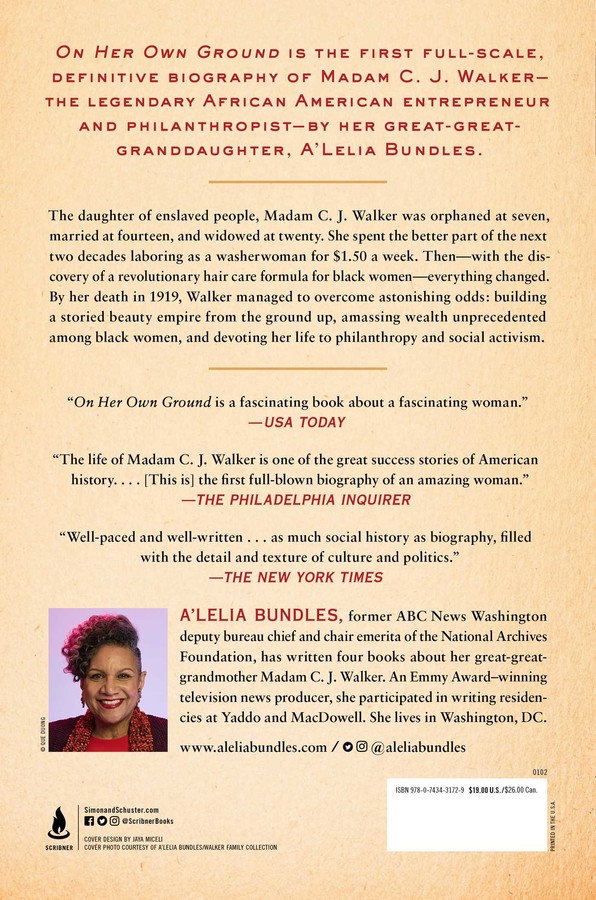 On Her Own Ground

The Life and Times of Madam C.J. Walker

Soon to be a Netflix series starring Octavia Spencer, On Her Own Ground is the first full-scale biography of “one of the great success stories of American history” (The Philadelphia Inquirer), Madam C.J. Walker—the legendary African American entrepreneur and philanthropist—by her great-great-granddaughter, A’Lelia Bundles.

The daughter of formerly enslaved parents, Sarah Breedlove—who would become known as Madam C. J. Walker—was orphaned at seven, married at fourteen, and widowed at twenty. She spent the better part of the next two decades laboring as a washerwoman for $1.50 a week. Then—with the discovery of a revolutionary hair care formula for black women—everything changed. By her death in 1919, Walker managed to overcome astonishing odds: building a storied beauty empire from the ground up, amassing wealth unprecedented among black women, and devoting her life to philanthropy and social activism. Along the way, she formed friendships with great early-twentieth-century political figures such as Ida B. Wells, Mary McLeod Bethune, W.E.B. Du Bois, and Booker T. Washington.

1) Very few documented details survive from Madam Walker's childhood as Sarah Breedlove. From her own words, we know that she was born in 1867 on the plantation where her parents had been slaves, that she was orphaned at 7, married at 14, a mother at 17 and a widow at 20. What events and people from her early life influenced her and planted the seeds for her later success? Because On Her Own Ground is a nonfiction book, the author cannot fictionalize details she does not know or fabricate conversations which never occurred. How does she compensate for the lack of documentation?
2) Madam Walker's daughter, Lelia (later known as A'Lelia Walker), provided much of her early motivation to improve her life. As Lelia grew older their relationship was complicated. In fact Madam Walker's secretary once said the relationship was "like fire and ice. They loved each other dearly and they sometimes fought fiercely." Yet, they were so enmeshed and emotionally connected that they were never fully estranged. The themes of loss and abandonment run through the lives of both women. Sarah's parents died before she really could know them. Lelia never really knew her father. Was Sarah overly protective? Did she spoil Lelia? How do you think John Davis's behavior affected their relationship? Why might it be that Lelia didn't seem to have the same level of ambition and drive as her mother?
3) What was the influence of the women of the AME Church, the NACW and the Court of Calanthe on Sarah? How did she use some of the networking skills she learned from these groups to organize her own sales agents and beauty culturists?
4) Many people focus on Madam Walker's role as a pioneer in the hair care industry. Her entrepreneurial contributions were important, but she seemed to have a vision for women that included economic independence and political action. Are there themes and initiatives that she raised at the 1917 and 1918 Walker agents convention and in other speeches that are relevant today?
5) Madam Walker wanted Booker T. Washington's endorsement though he was not receptive at first. Why did he shun her? How did she win him over? What do you think she felt when he resisted her efforts to speak at his 1912 National Negro Business League conference?
6) Madam Walker was one of the wealthiest self-made businesswomen of her era, but what made her truly great and unique was her philanthropy and political activism. Are there examples of women or African American entrepreneurs today who exhibit the same social consciousness? Why might such an approach be important?
7) What are some examples of Madam Walker's philanthropy?
8) Madam Walker tried to hide the existence of her second marriage to John Davis. Why do you think she did that? Why do you think she had so much difficulty in her marriages?
9) For many years many people believed the myth that Madam Walker invented the hot comb and that her primary objective was to straighten black women's hair. Now that you know this information is incorrect, what particular hygiene issue was she trying to address? Also, she was very aware of the controversy about whether black women should straighten their hair or maintain a more natural look. She once said, "Let me correct the erroneous impression that I claim to straighten hair. I deplore such impression because I have always held myself out as a hair culturist. I grow hair. I have absolute faith in my mission. I want the great masses of my people to take a greater pride in their appearance and to give their hair proper attention. I dare say that in the next ten years it will be a rare thing to see a kinky head of hair and it will not be straight either." What do you think she meant in the final sentence?
10) If your city is included in the book -- either as a place where Madam Walker lived or visited -- discuss what the community may have been like a century ago as African Americans and women tried to develop businesses and political organizations. Are there current reminders in your community of that history?
11) What were A'Lelia Walker's contributions to the Walker Company and to the Harlem Renaissance?
12) What is the current impact of Madam Walker's life? Does she still serve as an inspirational figure for women and people of color? What is her larger legacy to the business community? 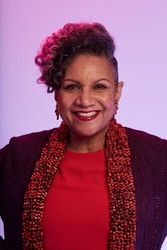 A’Lelia Bundles, author of On Her Own Ground: The Life and Times of Madam C. J. Walker, is Walker’s biographer and great-great-granddaughter. Self Made: Inspired by the Life of Madam C. J. Walker, the fictional four-part Netflix series inspired by this New York Times Notable Book and starring Octavia Spencer, premiered in the number one slot during its first weekend in 2020. She is chair emerita of the National Archives Foundation and a former ABC News Washington deputy bureau chief. She lives in Washington, DC. Visit her website at ALeliaBundles.com.

USA Today On Her Own Ground is a fascinating book about a fascinating woman....A wonderful story of an entrepreneur, but also a story about a dedicated African-American woman who was committed to giving her time and money to her community.

Chicago Tribune It is like finding out the secret sources of your past to read On Her Own Ground, a graceful biography by Walker's great-great-granddaughter....Bundles tells the tale with obvious affection and impressive scholarship....Under Bundles' deft handling, Walker's fable comes up fresh and inspirational. However we dress our hair, because of her, we daughters stand taller on our own ground.

The Philadelphia Inquirer The life of Madam C.J. Walker is one of the great success stories of American history. The wonder of it is that On Her Own Ground is the first full-blown biography of an amazing woman.

The New York Times Well-paced and well-written...as much social history as biography, filled with the detail and texture of culture and politics.

Chicago Sun-Times More than a history lesson in her rise to fame, On Her Own Ground offers inspiration to women -- regardless of race -- on how to succeed against all odds.

The Atlanta Journal-Constitution Bundles always knew, on some level, that this story was hers to tell. And she tells it with a controlled passion and an integrity that would have made Madam Walker proud.

Ishmael Reed Madam Walker is the key to understanding her generation. She had to battle the society that consigned her to doing its laundry...yet she triumphed to become one of the most fabulous African-American figures of the twentieth century.

On Her Own Ground

The Life and Times of Madam C.J. Walker