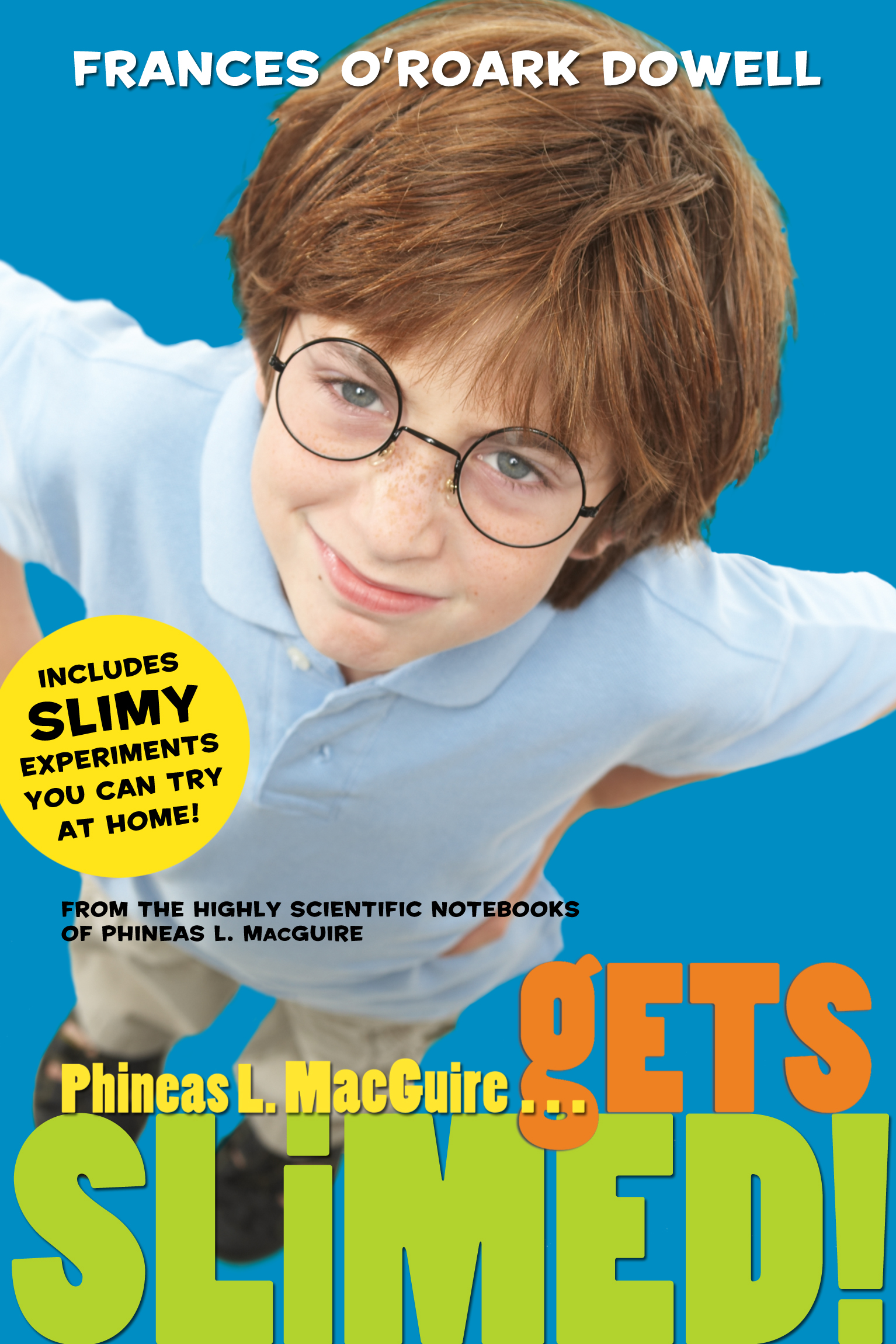 Phineas L. MacGuire—a.k.a. Mac—aims to be the best fourth-grade scientist ever. It’s a tall order, but he’s confident that he can achieve his goal, especially since Aretha has asked him to help her earn a Girl Scout badge by creating the mold that produces penicillin. How many fourth graders can say they’ve reproduced penicillin? None, as far as Mac knows. And who knows more about mold than Mac? But soon Mac is busy managing Ben’s campaign for class president and dealing with his weird new babysitter. How can he focus on mold?

My name is Phineas Listerman MacGuire.

Most people call me Mac.

My Sunday-school teacher and my pediatrician call me Phineas.

A few people, mostly my great-uncle Phil and his cockatiel, Sparky, call me Phin.

I mean not one single person.

I am currently in the fourth grade at Woodbrook Elementary School. On the first day of school my teacher, Mrs. Tuttle, asked us to write down our number one, two, and three goals for the year. Here is what I wrote:

So far this has not happened.

For example, I did not win the fourth-grade science fair. Me and my best friend, Ben, got an honorable mention. We made a volcano. It was a pretty good volcano, since I am an expert volcano maker. But these days it takes more than baking soda and vinegar to get a science fair judge excited.

I learned that the hard way.

Today Mrs. Tuttle asked us to take out our goal sheets and review our goals. She says the first week of November is a good time for goal reviewing. She also says most people who don’t meet their goals fail because they forget what their goals were in the first place.

“What is one step you can make this week that will help you meet one of your goals?” Mrs. Tuttle asked. She took a yellow rubber frog from the jar of rubber frogs she keeps on her desk and balanced it on the tip of her finger. “Think of one small thing you can do.”

I put my head down on my desk. After getting an honorable mention in the science fair, the only step I could take was to erase my three goals and start over. Maybe my goal could be to remember to take my gym clothes home on Friday afternoons.

Not that I would ever meet that goal either.

Aretha Timmons, who sits behind me in Mrs. Tuttle’s class and who won second place in the fourth-grade science fair, popped her pencil against the back of my head.

“Why so glum, chum?” she asked. “What goals did you put down, anyway?”

I held up my paper so she could read it. “Hmmm,” she said. “Well, it’s still pretty early in the year. You could do something amazing before Christmas if you put your mind to it.”

Ben, who sits one row over and two seats back from me, leaned toward us. “I’ve got two words for you, Mac: Albert ‘Mr. Genius Scientist’ Einstein.”

Maybe Ben’s goal should be to learn how to count.

“My point is, Albert Einstein, the most famous genius scientist of the world, flunked math about a thousand times. I don’t think he even graduated from high school. He was a complete birdbrain until he was thirty or something.”

“I didn’t flunk math,” I told him. “I just didn’t win first prize at the science fair.”

Ben is not a famous genius scientist, in case you were wondering.

He’s a pretty good friend, though.

“What you need is a good project,” Aretha said. “For example, if you could figure out a cure to a disease, that would be excellent. I’ve never heard of a fourth grader curing a disease before.”

“Or maybe you could rid the world of mold,” Ben said. “I mean, for a fourth grader, you sure know a lot about moldy junk.”

It’s true. I have always been sort of a genius when it comes to mold. Mold is like science that’s happening all over your house, unless your family is really neat and tidy and cleans out the refrigerator on a regular basis.

This does not describe my family at all.

“Not all mold is bad,” I told Ben, showing off my geniosity. “In fact, one of the most important medicines ever, penicillin, is made from mold.”

“So figure out how to get rid of the bad mold,” Ben said. “My mom would give you twenty bucks if you could get rid of the mold in our shower. That’s all she ever talks about practically.”

Rid the world of bad mold. It sounded like the sort of things a superhero would do in a comic book, if comic books were written by scientists with a special interest in single-celled organisms made out of fungus.

I could be Anti-Mold Man, Destroyer of Slime.

Not bad for a fourth grader.

I raised my hand. “Mrs. Tuttle, is it okay to change our goals, at least a little?”

“Revising your goals is a part of the process,” Mrs. Tuttle said. “Sometimes we make goals that are unrealistic or not what we really want after all.”

“Great!” I took out my pencil and started erasing my number one, two, and three goals. When I was done erasing, I wrote:

Frances O’Roark Dowell is the bestselling and critically acclaimed author of Dovey Coe, which won the Edgar Award and the William Allen White Award; Where I’d Like to Be; The Secret Language of Girls and its sequels The Kind of Friends We Used to Be and The Sound of Your Voice, Only Really Far Away; Chicken Boy; Shooting the Moon, which was awarded the Christopher Award; the Phineas L. MacGuire series; Falling In; The Second Life of Abigail Walker, which received three starred reviews; Anybody Shining; Ten Miles Past Normal; Trouble the Water; the Sam the Man series; The Class; How to Build a Story; and, most recently, Hazard. She lives with her family in Durham, North Carolina. Connect with Frances online at FrancesDowell.com.

Preston McDaniels is the illustrator of the Phineas L. MacGuire series and Cynthia Rylant’s Lighthouse Family series. He lives in Aurora, Nebraska, with his wife and two daughters.

More books in this series: From the Highly Scientific Notebooks of Phineas L. MacGuire