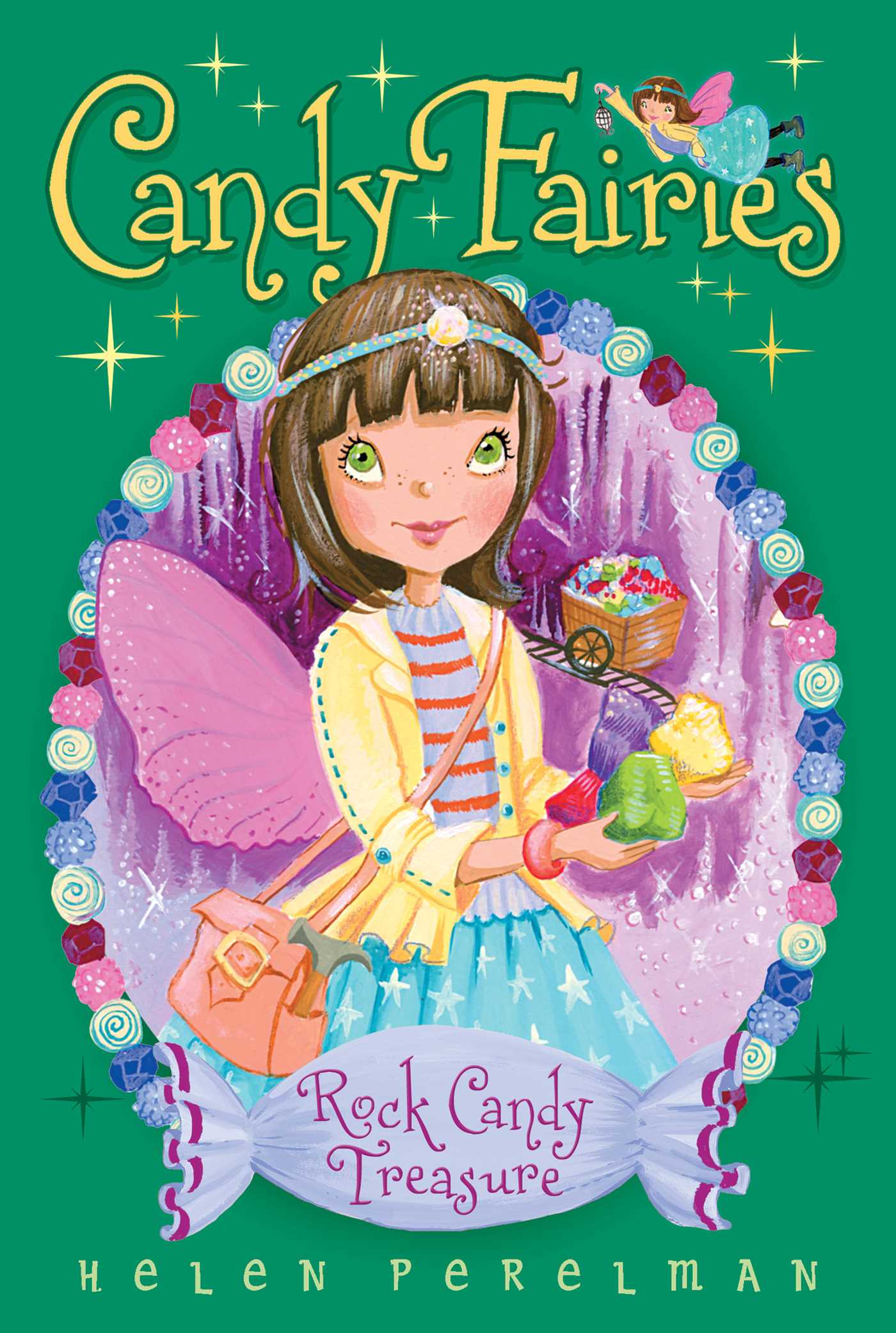 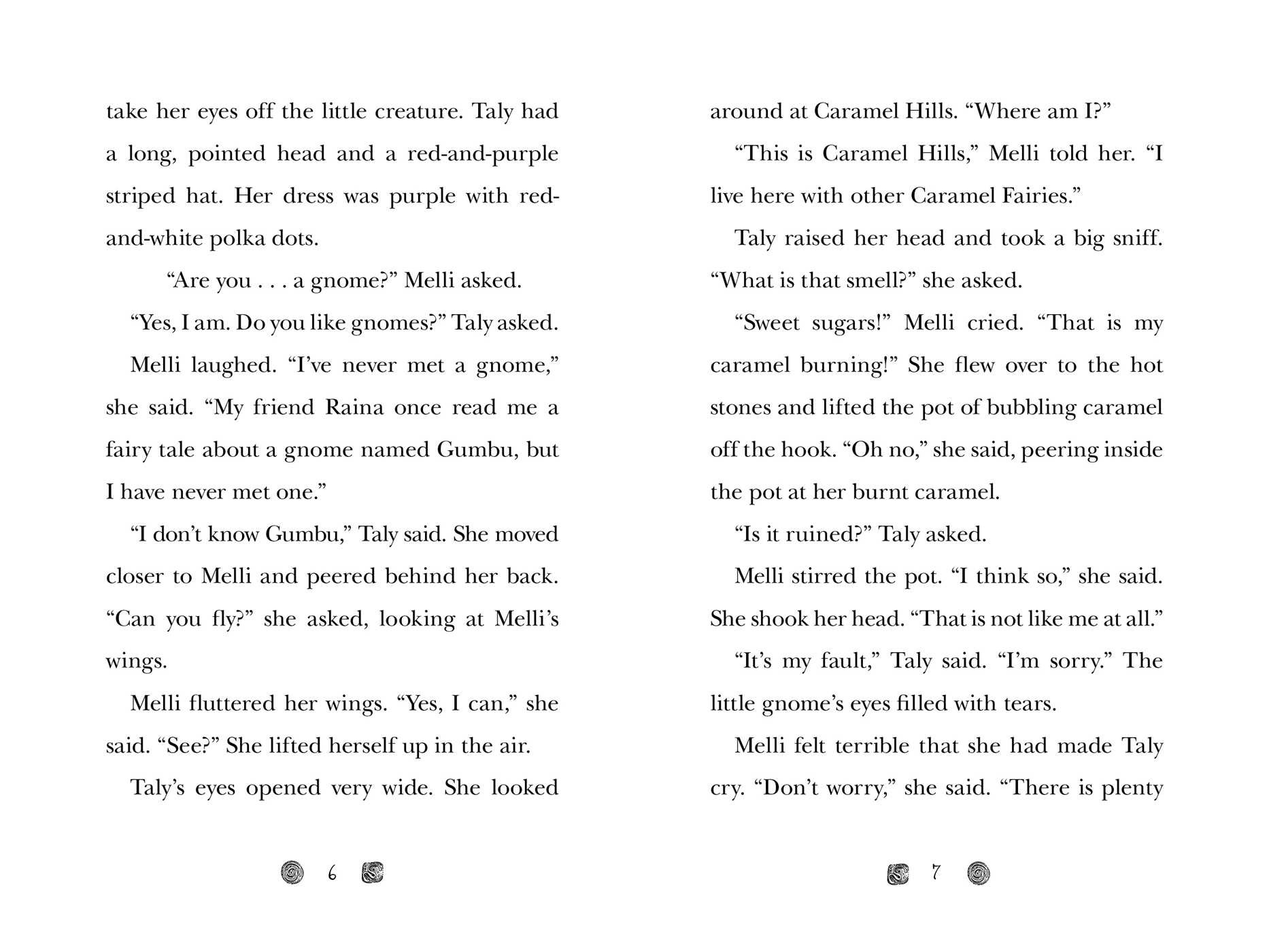 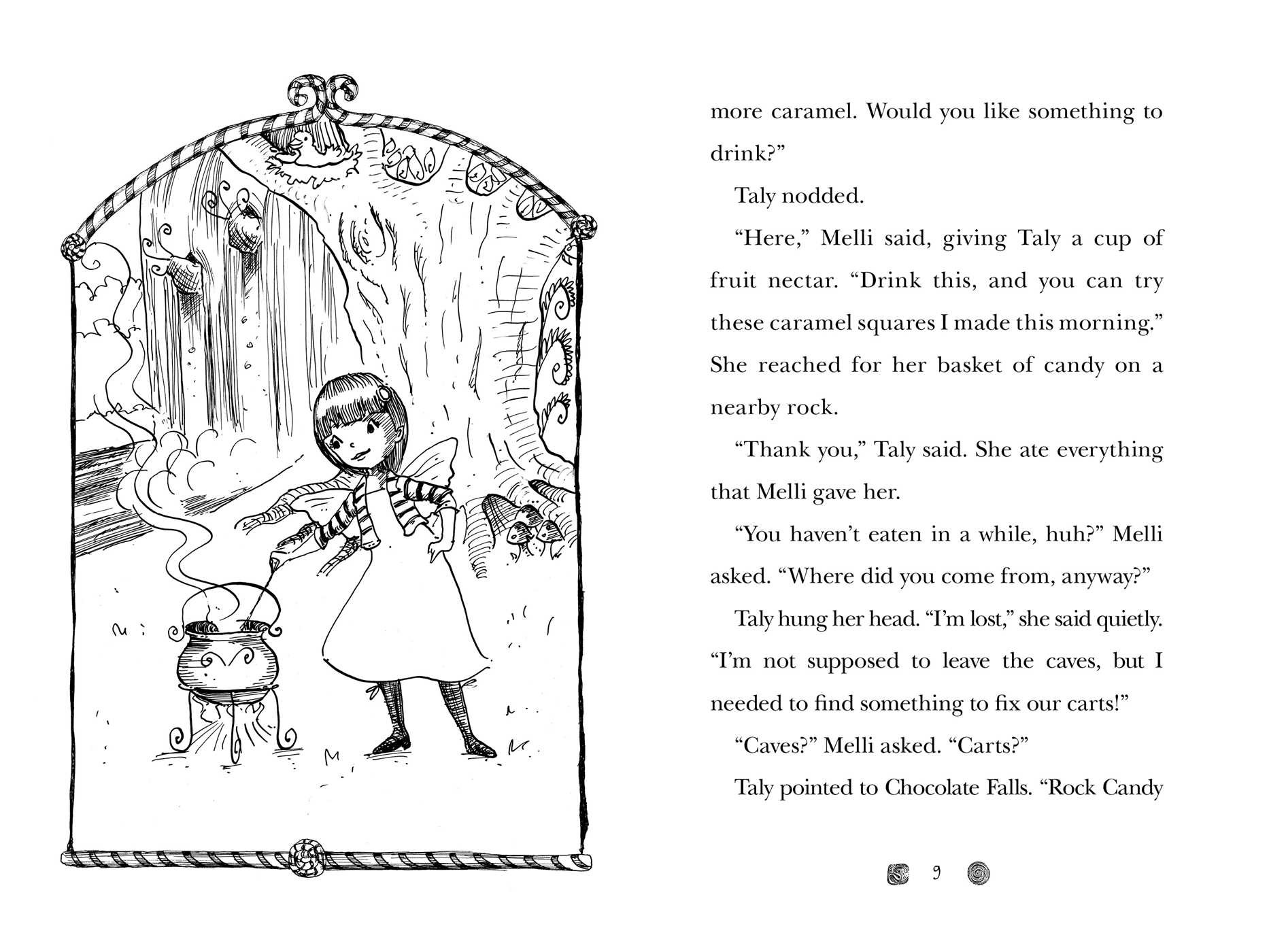 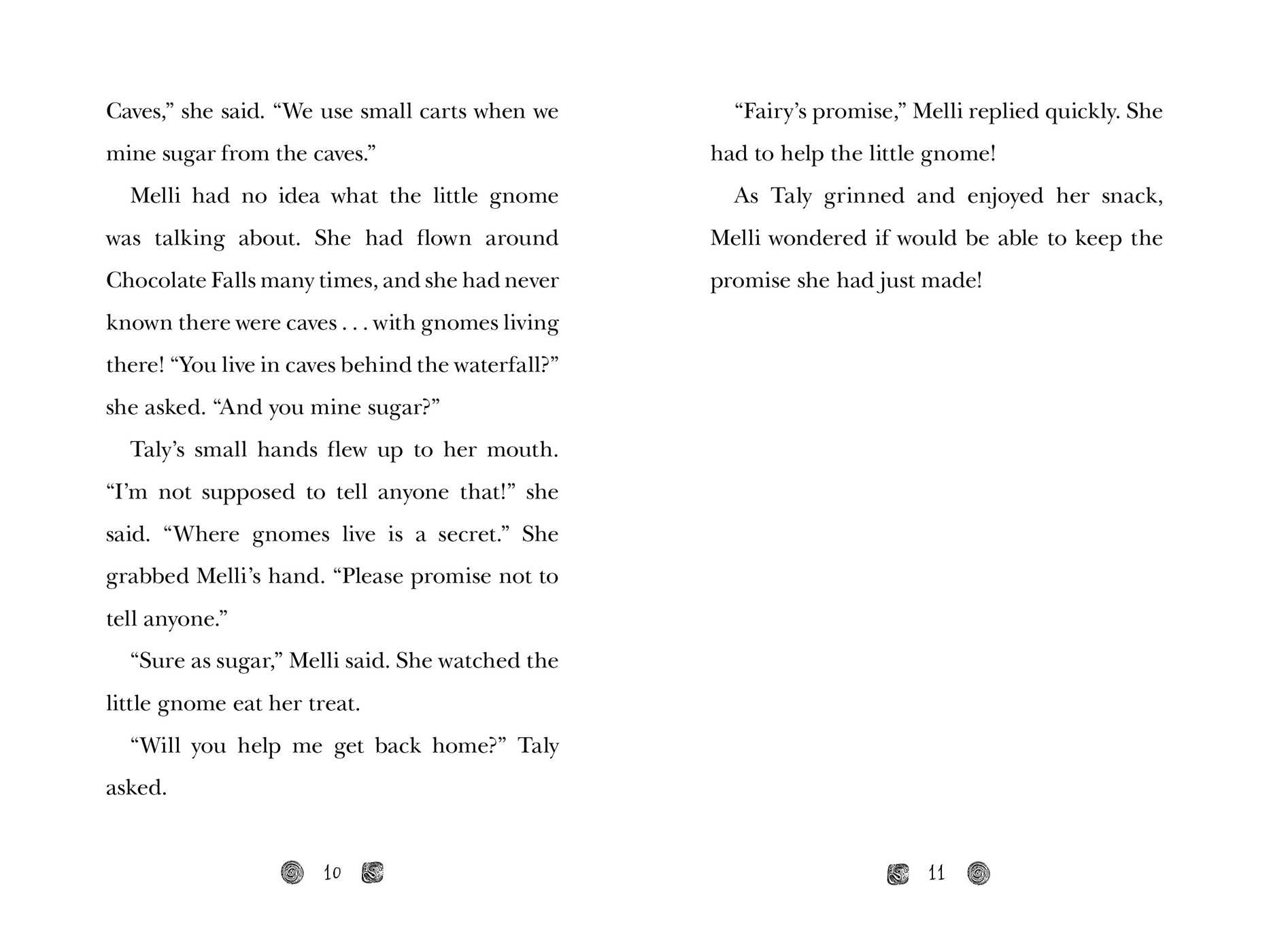 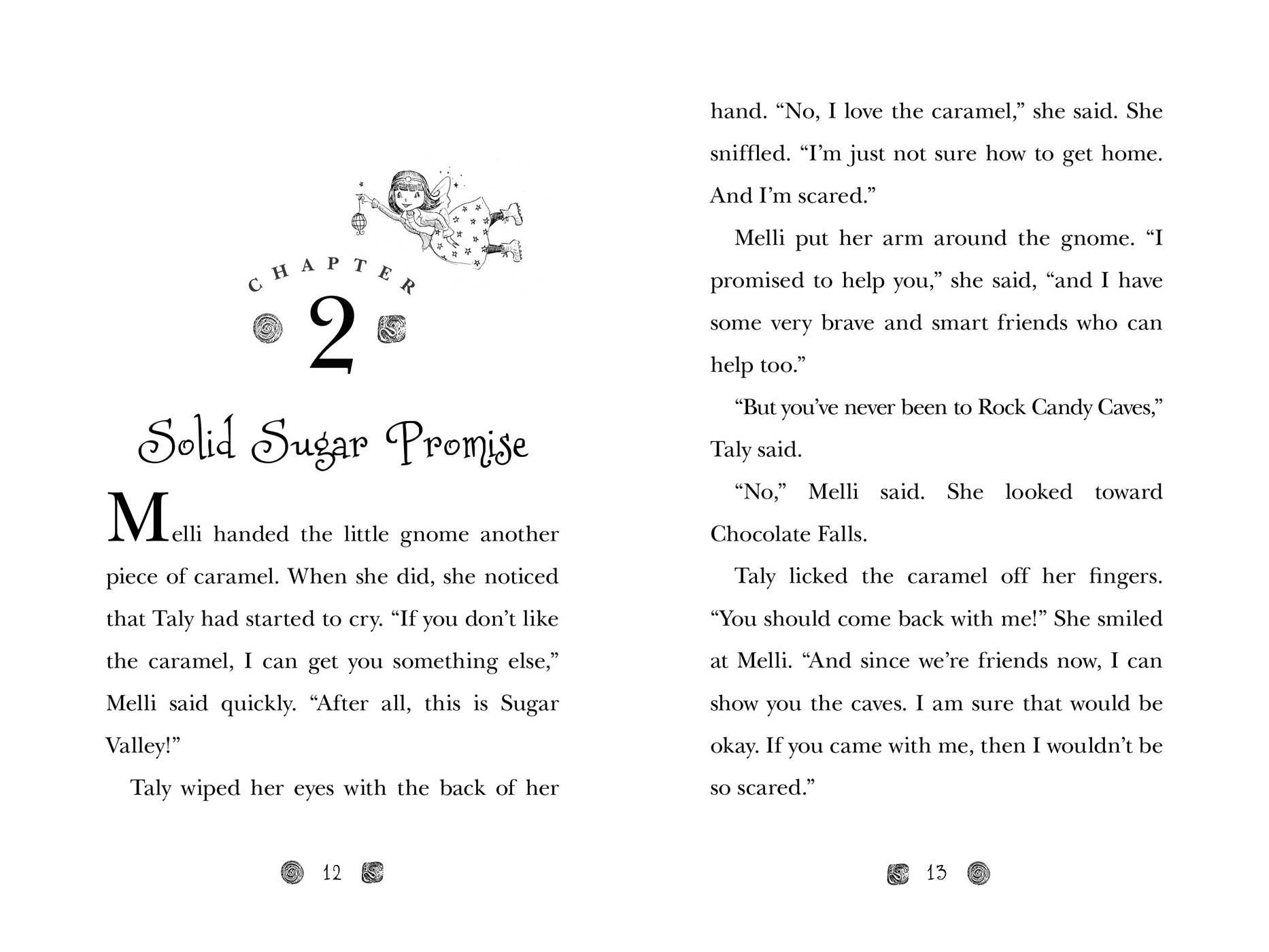 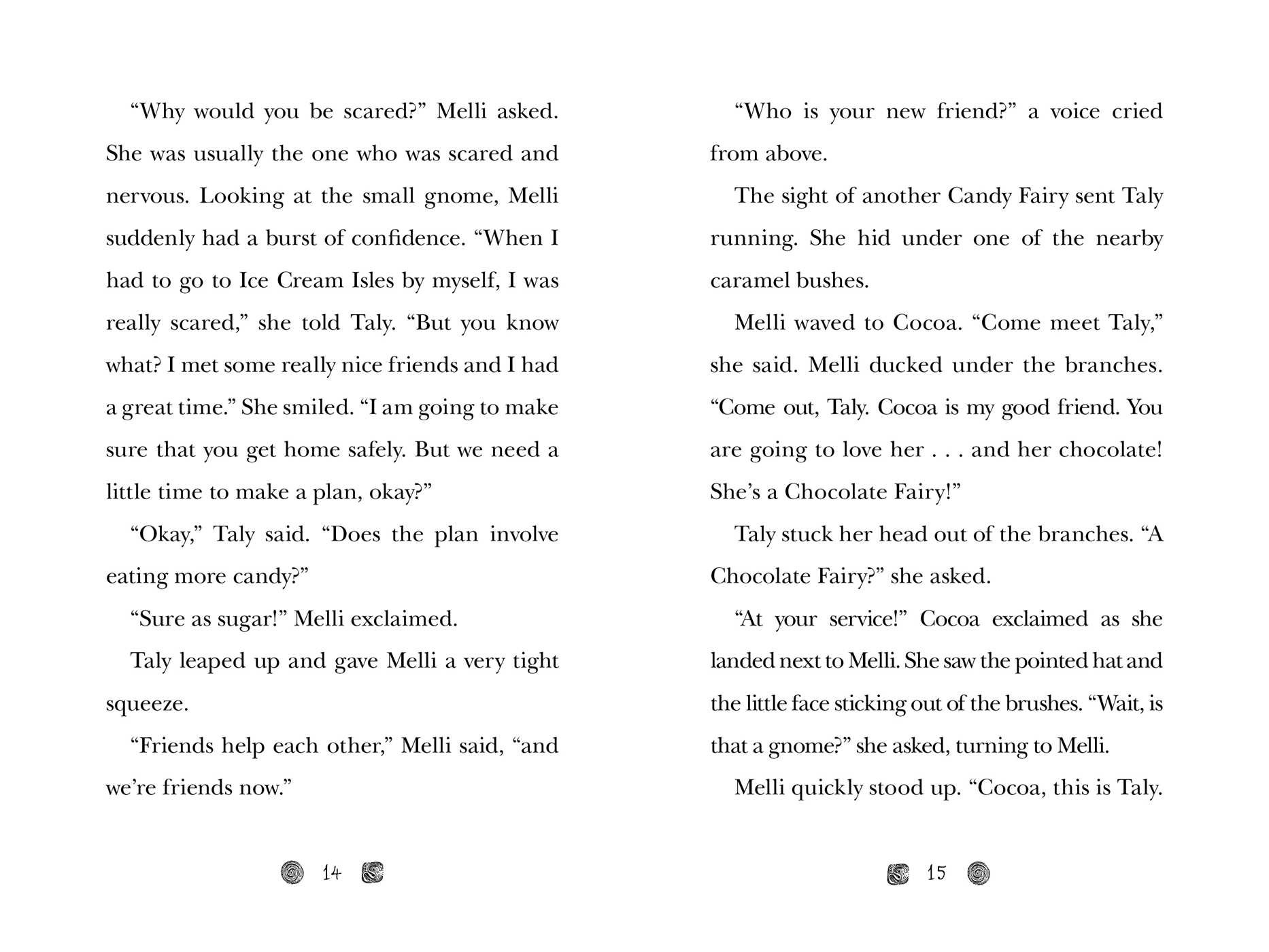 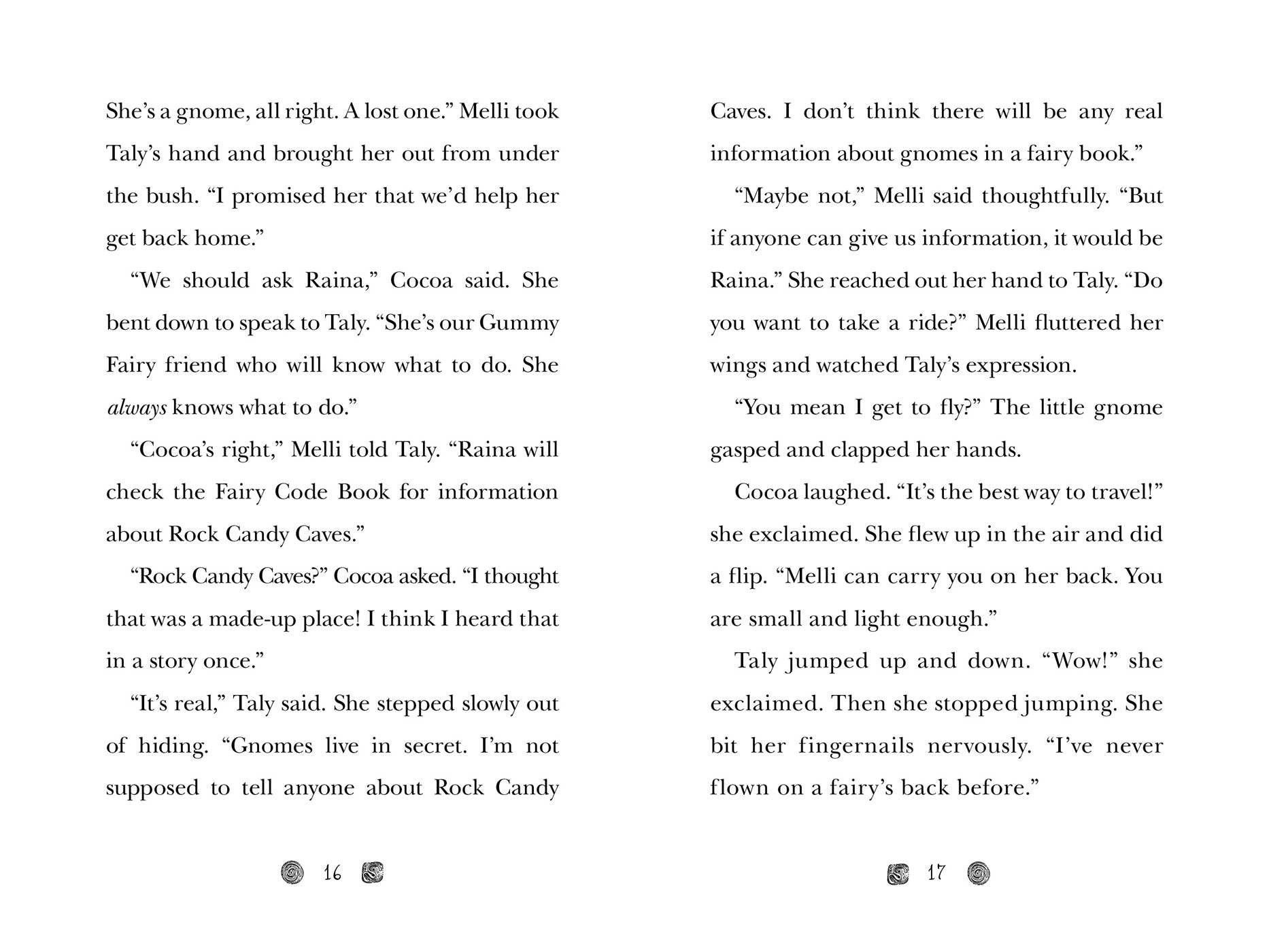 After meeting a sweet new friend, the Candy Fairies go exploring in the mysterious Rock Candy Caves and discover an underground treasure in this delicious adventure!

When Melli the Caramel Fairy meets Taly, a tiny lost gnome, she knows that she has to help her new friend find her way back home. With the help of the other Candy Fairies, Melli and Taly make their way back to the Rock Candy Caves. When they enter the strange caverns, the fairies can’t believe their eyes: rock formations of every size and color gleam and twinkle all around them. The fairies are sure the cave jewels are valuable. But the Rock Candy gnomes’ mining equipment is old, rusty, and dangerous! Can the Candy Fairies help their new underground friends save their sparkling treasure?

A New Friend
Melli the Caramel Fairy stood by the hot stones to melt her caramel in a clearing by Caramel Hills. She loved the sounds of Chocolate River rushing down the steep rocks. Chocolate Falls was one of her favorite places in Sugar Valley.

As she watched her pot of melting caramel dipping sauce, she hummed. She was learning to play a new song on her licorice stick, and she couldn’t get the melody out of her head. The song was hard to play, but she wanted to perform it at Candy Castle for Princess Lolli and Prince Scoop. The royal couple was hosting a dinner and had asked some Candy Fairies to play their musical instruments for the entertainment. It was a big honor, and Melli wanted her song to be perfect.

Out of the corner of her eye, Melli saw a bright streak of red and purple. She knew there were no caramel animals with those bright colors.

“Is someone there?” Melli called out. “Hello?”

A branch snapped in the woods, and Melli’s heart beat faster.

“Who is hiding in there?” she asked. She had a bad feeling that maybe one of Mogu’s Chuchies was hiding in the bushes. Sometimes Mogu the troll would send his little Chuchies to steal candy from Candy Fairies. Or worse than Chuchies, maybe it was Mogu!

Melli wished her other Candy Fairy friends were with her. If Cocoa the Chocolate Fairy were here, she would be brave and strong. Dash the Mint Fairy would be superfast and clever, and Raina the Gummy Fairy would be smart and know a story in the Fairy Code Book that would help. Her friend Berry the Fruit Fairy would likely not be scared at all!

The leaves on the bush in front of her moved, and Melli grew more nervous. She tried to think brave thoughts.

Melli was surprised to hear that reply. Who lived in Sugar Valley and didn’t know the greedy, salty troll Mogu, who stole candy and lived in Black Licorice Swamp?

“Who are you?” Melli asked. She fluttered her wings nervously and lifted herself off the ground.

“I’m Crystal,” the voice said. “But you can call me Taly. Everybody calls me Taly.”

Melli knelt down on the ground where the voice was coming from. Whoever was speaking was small and seemed friendly. Melli peered between the branches. “Hello, Taly,” she said. “I am Melli, a Caramel Candy Fairy.”

“Are you a friendly Candy Fairy?” Taly asked.

“Of course!” Melli exclaimed. She saw the tips of tiny, bright candy-apple-red boots.

“I’ve never seen a Candy Fairy,” Taly replied. She stepped from behind the branches and out of hiding.

Melli didn’t mean to stare, but she couldn’t take her eyes off the little creature. Taly had a long, pointed head and a red-and-purple striped hat. Her dress was purple with red-and-white polka dots.

Melli laughed. “I’ve never met a gnome,” she said. “My friend Raina once read me a fairy tale about a gnome named Gumbu, but I have never met one.”

“I don’t know Gumbu,” Taly said. She moved closer to Melli and peered behind her back. “Can you fly?” she asked, looking at Melli’s wings.

Melli fluttered her wings. “Yes, I can,” she said. “See?” She lifted herself up in the air.

Taly’s eyes opened very wide. She looked around at Caramel Hills. “Where am I?”

“This is Caramel Hills,” Melli told her. “I live here with other Caramel Fairies.”

Taly raised her head and took a big sniff. “What is that smell?” she asked.

“Sweet sugars!” Melli cried. “That is my caramel burning!” She flew over to the hot stones and lifted the pot of bubbling caramel off the hook. “Oh no,” she said, peering inside the pot at her burnt caramel.
Helen Perelman