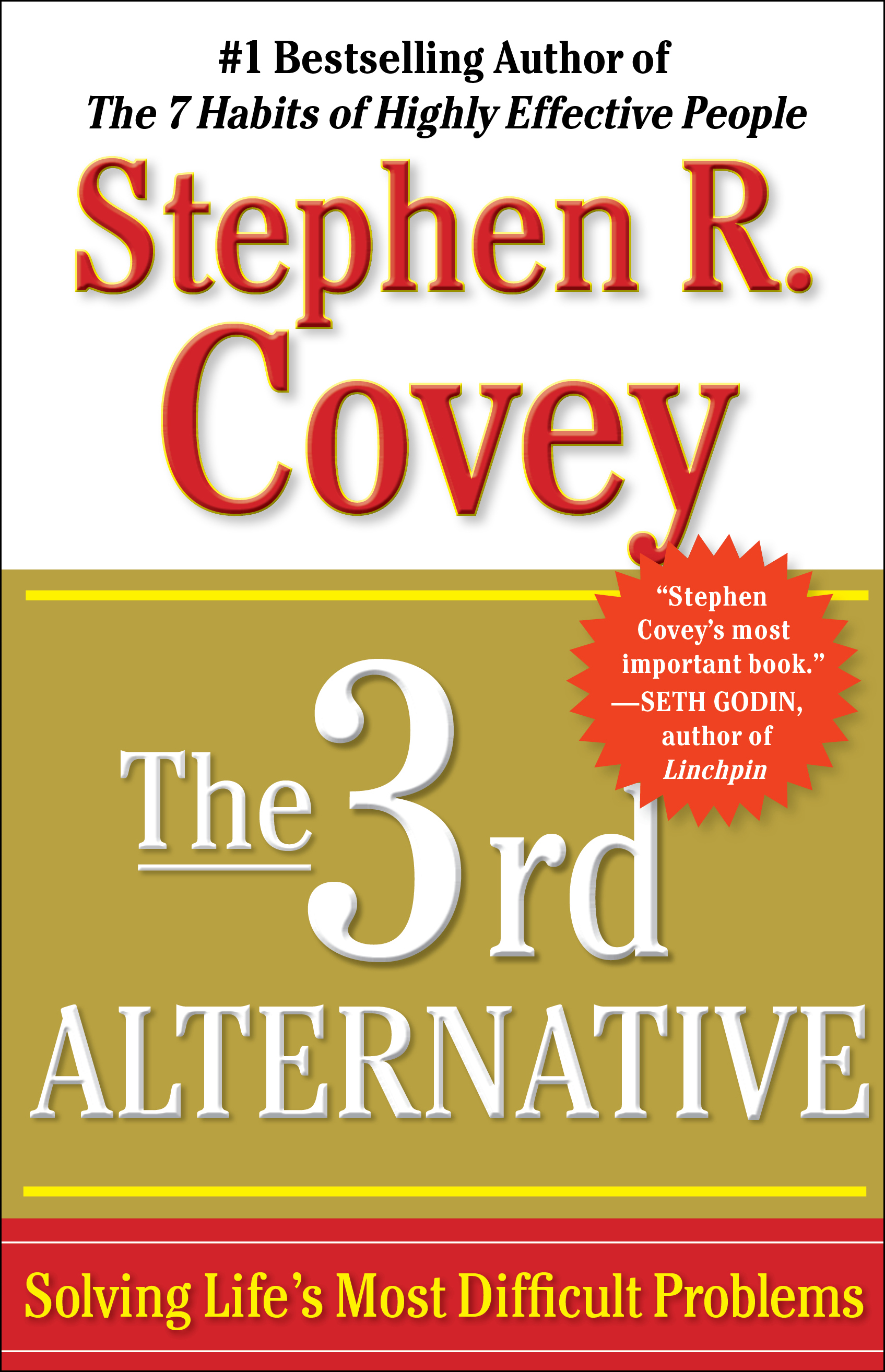 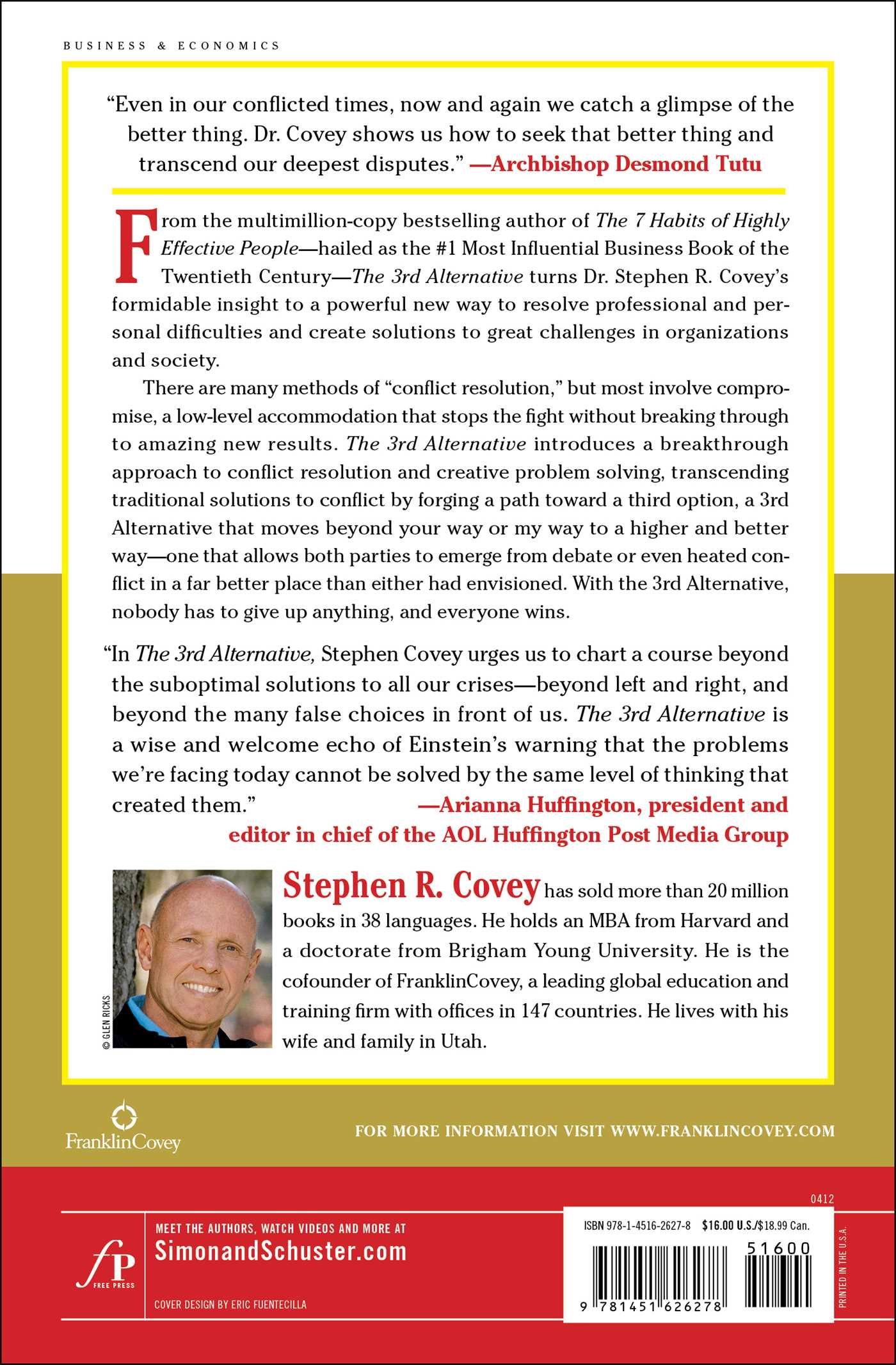 From the multimillion-copy bestselling author of The 7 Habits of Highly Effective People, hailed as the #1 Most Influential Business Book of the Twentieth Century, The 3rd Alternative introduces a breakthrough approach to conflict resolution and creative problem solving.

There are many methods of “conflict resolution,” but most involve compromise, a low-level accommodation that stops the fight without breaking through to new and innovative results. The 3rd Alternative introduces a breakthrough approach to conflict resolution and creative problem solving, transcending traditional solutions to conflict by forging a path toward a third option. A third alternative moves beyond your way or my way to a higher and better way—one that allows both parties to emerge from debate or even heated conflict in a far better place than either had envisioned. With the third alternative, nobody has to give up anything, and everyone wins.

Through key examples and stories from his work as a consultant, Covey demonstrates the power of 3rd Alternative thinking. His wide-ranging examples include a Canadian metropolitan police force that transformed a crime-plagued community; a judge who brought a quick, peaceful end to one of the biggest environmental lawsuits in American history without setting foot in a courtroom; the principal of a high school for children of migrant workers who raised their graduation rate from 30 percent to 90 percent; a handful of little-known people who are quietly finding new ways to bring peace to the Middle East; and many others. These various groups and individuals offer living examples of how to create new and better results instead of escalating conflict, as well as how to build strong relationships based on an attitude of winning together.

Beyond conflict and compromise, The 3rd Alternative unveils a radical, creative new way of thinking.

Perhaps you’re in a marriage that started off great, but now you can barely stand each other. You may have estranged relationships with your parents, siblings, or children. It could be that you feel overwhelmed and out of balance at work, always trying to do more with less. Or maybe, like so many others, you are tired of our litigious society, in which people are so quick to sue you don’t dare make a move. We worry about crime and its drag on our society. We see politicians going at it and getting nowhere. We watch the news at night and lose hope that the perpetual conflicts between people and nations will ever be resolved.

So we lose hope, give up, or settle for a compromise that doesn’t feel so good in the end.

That’s why I’ve longed to write this book.

It’s about a principle so fundamental that I believe it can transform your life and the whole world. It is the highest and most important insight I have garnered from studying those people who lead truly effective lives.

Basically, it’s the key to solving life’s most difficult problems.

All people suffer adversities, mostly in silence. Most soldier on bravely in the face of their problems, working and hoping for a better future. For many, terror is just under the surface. Some of these terrors are physical, some psychological, but all are very real.

If you understand and live by the principle in this book, you may not only conquer your problems, but you may go on to build a future for yourself that’s better than you ever imagined possible. I did not discover this principle—it’s eternal. But for those who apply it to the challenges they face, it’s no understatement to say that it may be the greatest discovery of their lives.

My book The 7 Habits of Highly Effective People leads up to it. Of all the principles in that book, I called it “the most catalytic, the most empowering, the most unifying, and the most exciting.” In The 7 Habits, I was able to deal with this principle in only a general way; but in this book, I invite you to explore it with me much more broadly and deeply. If you pay the price to truly understand it, you’ll never think the same way again. You’ll find yourself approaching your most difficult challenges in life in an entirely new, exponentially more effective way.

I’m profoundly excited to share with you stories about some rare people who have grasped this principle. They are not only problem solvers but also creators of the new future we all dream of. Among many, you’ll read about

Let me emphasize: none of these is a celebrity with lots of money and influence. All are, for the most part, ordinary people who are successfully applying this supreme principle to their toughest problems. And so can you.

I can hear you thinking, “Well, I’m not trying to do anything heroic like those people. I’ve got my own problems, and they’re big to me. I’m tired, and I just want to find a solution that works.”

Believe me, there’s nothing in this book that isn’t both global and personal. The principle applies equally well to a single mother trying her hardest to raise a restless teenager as to a head of state trying to stop a war.

You can apply this principle to

I have taught the underlying principle of this book for more than forty years to literally hundreds of thousands of people. I’ve taught it to young schoolchildren, to rooms full of corporate CEOs, to graduating students, to heads of state in some thirty countries, and to everyone in between. I’ve approached all of them in virtually the same way. I have written this book to apply equally well to a playground, a battlefield, a boardroom, a legislative chamber, or a family kitchen.

I belong to a world leadership group seeking to build a better relationship between the West and the Islamic community. It includes a former U.S. secretary of state, prominent imams and rabbis, global business leaders, and experts on conflict resolution. At our first meeting, it became obvious that everyone had an agenda. It was all rather formal and cool, and you could just feel the tension. That was on a Sunday.

I asked permission from the group to teach them one principle before we went any further, and they graciously agreed. So I taught them the message of this book.

By Tuesday night the whole atmosphere had changed. The private agendas had been shelved. We had arrived at an exciting resolution that we had never anticipated. The people in the room were filled with respect and love for one another—you could see it, and you could feel it. The former secretary of state whispered to me, “I’ve never seen anything so powerful. What you’ve done here could totally revolutionize international diplomacy.” More on this later.

As I said, you don’t have to be a global diplomat to put this principle to work on your own challenges. Recently we surveyed people around the world to find out what their top challenges were personally, on the job, and in the world at large. It was not a representative sample; we just wanted to find out what different people had to say. The 7,834 people who responded were from every continent and from every level of every kind of organization.

This is a snapshot view of how our friends and neighbors are feeling. They might list different challenges tomorrow, but I suspect we’d see only variations on the same sorts of pain.

Under these mounting pressures, we fight each other more. The twentieth century was an age of impersonal war, but the twenty-first seems like an age of personal malice. The rage thermometer is way up. Families quarrel, co-workers contend, cyber bullies terrorize, courts are jammed, and fanatics murder the innocent. Contemptuous “commentators” swamp the media—the more outrageous their attacks, the more money they make.

This rising fever of contention can make us ill. “I’m deeply disturbed by the ways in which all of our cultures are demonizing the Other. … The worst eras in human history start like this, with negative otherizing. And then they morph into violent extremism,” says the wellness expert Elizabeth Lesser.2 We know too well where this sort of thing leads.

No matter what approach we take to our problems, natural consequences will follow. War begets war, victims become dependent, reality crushes people in denial, cynics contribute nothing. And if we keep doing the same things we’ve always done, hoping that this time the results will be different, we are not facing reality. Albert Einstein reportedly said, “The significant problems we have cannot be solved at the same level of thinking with which we created them.”

To solve our most difficult problems, we must radically change our thinking—and that’s what this book is about.

As you read, you will find yourself poised on a transition point between your past, whatever it has been, and a future you have never imagined until now. You will discover within yourself a talent for change. You will think about your problems in an entirely revolutionary way. You will develop new mental reflexes that will propel you through barriers others find insurmountable.

You will be able to see from that transition point a new future for yourself—and the years ahead might be not at all what you expected. Instead of halting into an inevitable future of diminishing capacity riddled with problems, you can start now to fulfill your hunger for a life “in crescendo” that is always fresh and meaningful and filled with extraordinary contributions—right to the end.

By recentering your life on the principle of this book, you will find a surprising way forward into that future. 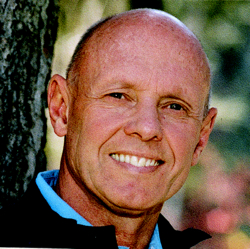 Recognized as one of Time magazine’s twenty-five most influential Americans, Stephen R. Covey (1932–2012) was an internationally respected leadership authority, family expert, teacher, organizational consultant, and author. His books have sold more than twenty-five million copies in thirty-eight languages, and The 7 Habits of Highly Effective People was named the #1 Most Influential Business Book of the Twentieth Century. After receiving an MBA from Harvard and a doctorate degree from Brigham Young University, he became the cofounder and vice chairman of FranklinCovey, a leading global training firm.

SEE ALL
See more by Stephen R. Covey
Thank you for signing up, fellow book lover!