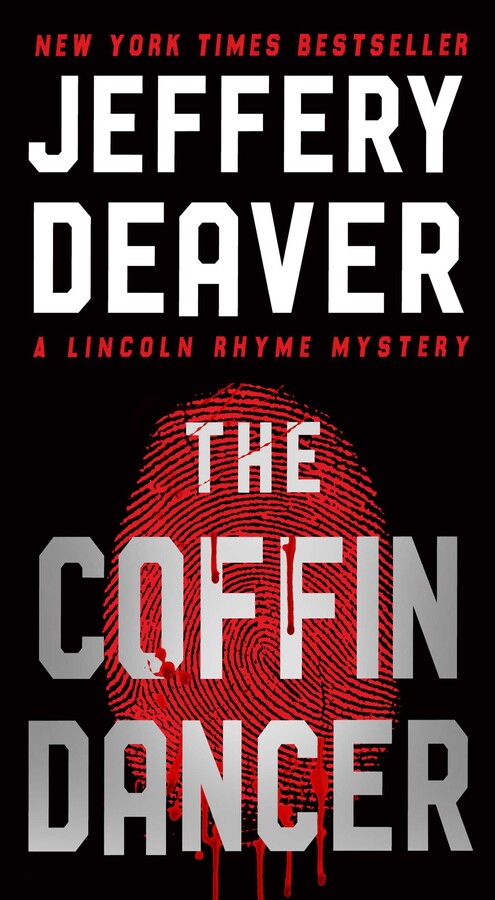 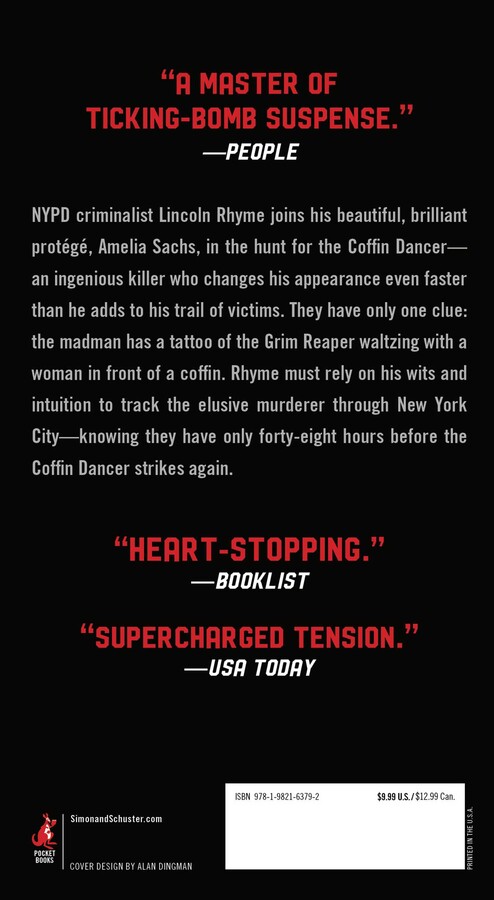 NYPD criminalist Lincoln Rhyme joins his brilliant protégé Amelia Sachs, in the hunt for the Coffin Dancer—an ingenious killer who changes his appearance even faster than he adds to his trail of victims. They have only one clue: the madman has a tattoo of the Grim Reaper waltzing with a woman in the front of a coffin. Rhyme must rely on his wits and intuition to track the elusive murderer through New York City—knowing they have only forty-eight hours before the Coffin Dancer strikes again.

The Coffin Dancer . . . Chapter One
When Edward Carney said good-bye to his wife, Percey, he never thought it would be the last time he’d see her.

He climbed into his car, which was parked in a precious space on East Eighty-first Street in Manhattan, and pulled into traffic. Carney, an observant man by nature, noticed a black van parked near their town house. A van with mud-flecked, mirrored windows. He glanced at the battered vehicle and recognized the West Virginia plates, realizing he’d seen the van on the street several times in the past few days. But then the traffic in front of him sped up. He caught the end of the yellow light and forgot the van completely. He was soon on the FDR Drive, cruising north.

Twenty minutes later he juggled the car phone and called his wife. He was troubled when she didn’t answer. Percey’d been scheduled to make the flight with him—they’d flipped a coin last night for the left-hand seat and she’d won, then given him one of her trademark victory grins. But then she’d wakened at 3 A.M. with a blinding migraine, which had stayed with her all day. After a few phone calls they’d found a substitute copilot and Percey’d taken a Fiorinal and gone back to bed.

A migraine was the only malady that would ground her.

Lanky Edward Carney, forty-five years old and still wearing a military hairstyle, cocked his head as he listened to the phone ringing miles away. Their answering machine clicked on and he returned the phone to the cradle, mildly concerned.

He kept the car at exactly sixty miles per hour, centered perfectly in the right lane; like most pilots he was conservative in his car. He trusted other airmen but thought most drivers were crazy.

In the office of Hudson Air Charters, on the grounds of Mamaroneck Regional Airport, in Westchester, a cake awaited. Prim and assembled Sally Anne, smelling like the perfume department at Macy’s, had baked it herself to commemorate the company’s new contract. Wearing the ugly rhinestone biplane brooch her grandchildren had given her last Christmas, she scanned the room to make sure each of the dozen or so employees had a piece of devil’s food sized just right for them. Ed Carney ate a few bites of cake and talked about tonight’s flight with Ron Talbot, whose massive belly suggested he loved cake though in fact he survived mostly on cigarettes and coffee. Talbot wore the dual hats of operations and business manager and he worried out loud if the shipment would be on time, if the fuel usage for the flight had been calculated correctly, if they’d priced the job right. Carney handed him the remains of his cake and told him to relax.

He thought again about Percey and stepped away into his office, picked up the phone.

Still no answer at their town house.

Now concern became worry. People with children and people with their own business always pick up a ringing phone. He slapped the receiver down, thought about calling a neighbor to check up on her. But then the large white truck pulled up in front of the hangar next to the office and it was time to go to work. Six P.M.

Talbot gave Carney a dozen documents to sign just as young Tim Randolph arrived, wearing a dark suit, white shirt, and narrow black tie. Tim referred to himself as a “copilot” and Carney liked that. “First officers” were company people, airline creations, and while Carney respected any man who was competent in the right-hand seat, pretension put him off.

Tall, brunette Lauren, Talbot’s assistant, had worn her lucky dress, whose blue color matched the hue of the Hudson Air logo—a silhouette of a falcon flying over a gridded globe. She leaned close to Carney and whispered, “It’s going to be okay now, won’t it?”

“It’ll be fine,” he assured her. They embraced for a moment. Sally Anne hugged him too and offered him some cake for the flight. He demurred. Ed Carney wanted to be gone. Away from the sentiment, away from the festivities. Away from the ground.

And soon he was. Sailing three miles above the earth, piloting a Lear 35A, the finest private jet ever made, clear of markings or insignia except for its N registration number, polished silver, sleek as a pike.

Only dawn was as beautiful. And only thunderstorms more spectacular.

It was 723 miles to O’Hare and they covered that distance in less than two hours. Air Traffic Control’s Chicago Center politely asked them to descend to fourteen thousand feet, then handed them off to Chicago Approach Control.

Tim made the call. “Chicago Approach. Lear Four Niner Charlie Juliet with you at one four thousand.”

“Roger, Chicago. Niner Charlie Juliet out of fourteen for eight.”

O’Hare is the busiest airport in the world and ATC put them in a holding pattern out over the western suburbs of the city, where they’d circle, awaiting their turn to land.

Carney glanced up at the bright points of constellations in the stunning gunmetal sky and thought, Look, Percey, it’s all the stars of evening . . .

And with that he had what was the only unprofessional urge of perhaps his entire career. His concern for Percey arose like a fever. He needed desperately to speak to her.

“Take the aircraft,” he said to Tim.

Carney changed the frequency of his radio to make a unicom call. Tim glanced at him. “Calling the Company,” Carney explained. When he got Talbot he asked to be patched through the telephone to his home.

As he waited, Carney and Tim went through the litany of the pre-landing check.

As Tim spoke into his mike—“Chicago, Niner Charlie Juliet, crossing the numbers; through five for four”—Carney heard the phone start to ring in their Manhattan town house, seven hundred miles away.

Come on, Percey. Pick up! Where are you?

Where the hell is she? What’s wrong?

The knot in his gut grew tighter.

He laughed out loud in relief.

Carney started to speak but, before he could, the aircraft gave a huge jolt—so vicious that in a fraction of a second the force of the explosion ripped the bulky headset from his ears and the men were flung forward into the control panel. Shrapnel and sparks exploded around them.

Stunned, Carney instinctively grabbed the unresponsive yoke with his left hand; he no longer had a right one. He turned toward Tim just as the man’s bloody, rag-doll body disappeared out of the gaping hole in the side of the fuselage.

Then the entire cockpit broke away from the disintegrating plane and rose into the air, leaving the fuselage and wings and engines of the Lear behind, engulfed in a ball of gassy fire.

“Oh, Percey,” he whispered, “Percey . . . ” Though there was no longer a microphone to speak into.

Jeffery Deaver is the #1 international bestselling author of more than forty novels, three collections of short stories, and a nonfiction law book. His books are sold in 150 countries and translated into 25 languages. His first novel featuring Lincoln Rhyme, The Bone Collector, was made into a major motion picture starring Denzel Washington and Angelina Jolie, and a hit television series on NBC.

He’s received or been shortlisted for a number of awards around the world, including Novel of the Year by the International Thriller Writers and the Steel Dagger from the Crime Writers' Association in the United Kingdom. In 2014, he was the recipient of three lifetime achievement awards. A former journalist, folksinger, and attorney, he was born outside of Chicago and has a bachelor of journalism degree from the University of Missouri and a law degree from Fordham University.

"This is as good as it gets....The Lincoln Rhyme series is simply outstanding." – San Jose Mercury News

"Deaver is a master of ticking-bomb suspense." – People

"Intense and heart-stopping...leaves readers gasping at the stunning climax." – Booklist

"Deaver revs up the already supercharged tension by cramming all of the action in The Coffin Dancer into forty-eight hours." – USA Today

"Revelations and reversals punctuate this thriller like a string of firecrackers....Superb plotting and brisk, no-nonsense prose." – Publishers Weekly

"Quick to the punch, The Coffin Dancer is diabolically packed with the good stuff: coverups, mystery, action." – Library Journal

"Fair warning to newcomers: Author Deaver is just as cunning and deceptive as his killer; don't assume he's run out of tricks until you've run out of pages." – Kirkus Reviews

"Readers who like "insider information" on police and FBI lingo will enjoy details Deaver adds to the dialogue." – St. Petersburg Times