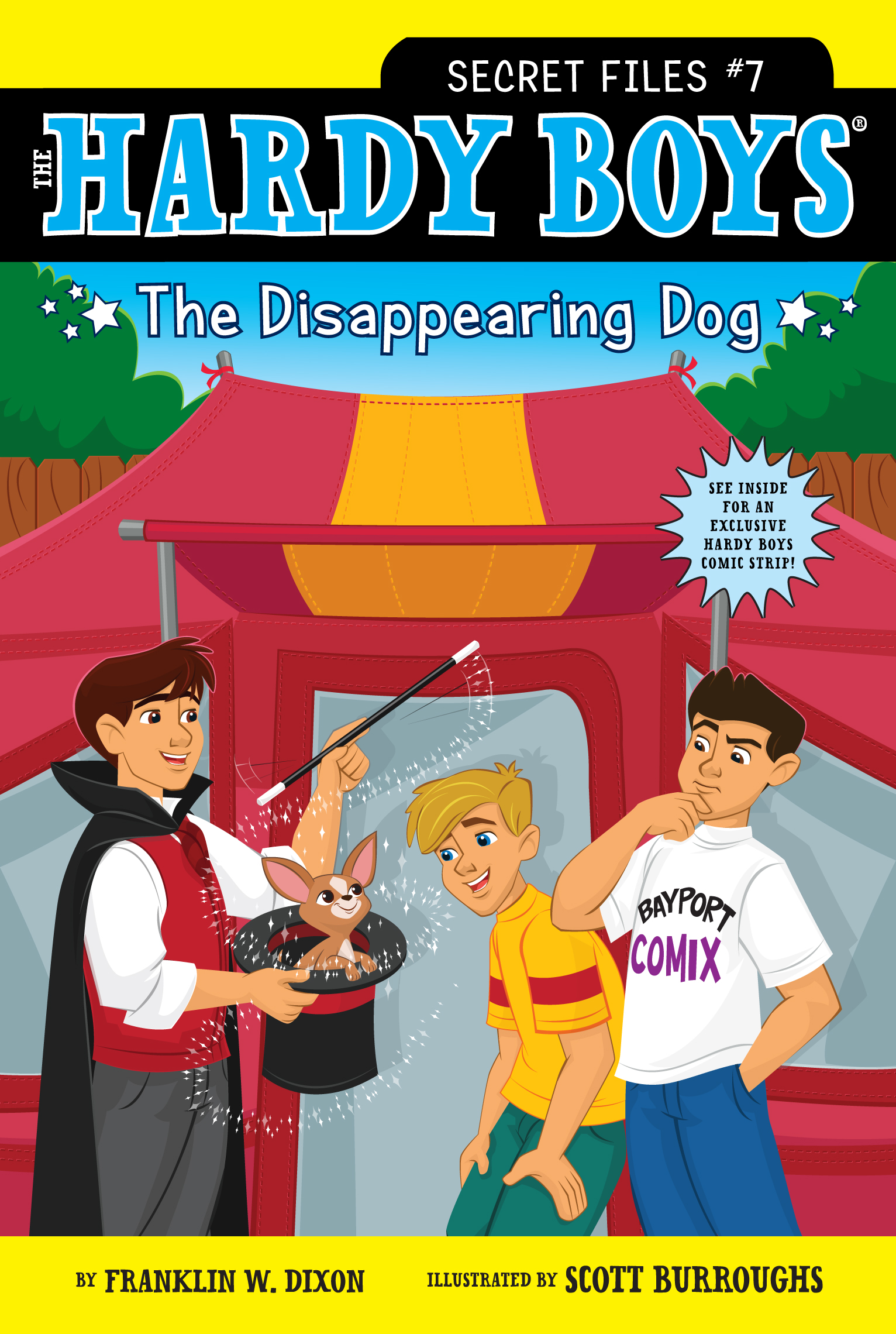 There's a new kid in town in Bayport, and Frank and Joe Hardy aren't really sure what to make of Max O' Malley, the Magician. Not only is he totally annoying, he claims that he can make anything--or anyone--disappear.

Though Max wins over a bunch of his classmates, Frank and Joe remain skeptical--until Mrs. Briar's prized show dog, Charlie, suddenly disappears--and keeps on mysteriously diappearing and reappearing. Max quickly becomes the prime suspect, but is he really the one behind the strange occurances? Or is Max really as magical as he says he is?

The Hardy Boys® Secret Files #7 1
Class Magician
Nine-year-old Frank Hardy’s substitute teacher for the week, Ms. Yung, came into the room, a big smile on her face, and said, “I’ve just come from the principal’s office, students. You’re getting a new classmate! He used to go to the school where I taught last year, so I already know all about him.”

Frank leaned over to his friend Callie Shaw and whispered, “Whoever it is must be really something.”

Just then a boy appeared at the classroom door. He was dressed in a knit shirt, jeans, and sneakers. He was holding a green backpack in his left hand. Frank wondered what was so special about this average-looking kid.

“This is Max O’Malley, class,” Ms. Yung announced. “And he has a very special talent.”

Max smiled at the class.

“Our principal said I could let Max show you what it is,” Ms. Yung continued. “Would you like that?”

Ms. Yung nodded at Max, and he ran out of the room. Frank gave Callie a puzzled look. Before he could say anything, though, Max was back. But now he had a black top hat on his head, a black cape around his shoulders, and a long black wand in his left hand.

“Class,” Ms. Yung announced, “I give you Max O’Malley, Magician!”

When nothing happened, Max said, “This is where I usually get loud applause!”

Frank looked at Callie and rolled his eyes.

Several kids at the front began to applaud weakly. Then the applause increased to the point that it was at least polite.

“Thanks!” Max said. With a swirl of his cape he swept into the room and stood to the side of Ms. Yung’s desk. “I can make anything disappear!” he said. “Anything!” He slowly narrowed his eyes to slits. “So you all need to be careful!”

“Oh, brother,” someone in the class mumbled.

Suddenly Max took off his top hat and waved his wand over it, and a puff of smoke whooshed from inside.

“You’re not supposed to light anything on fire on school grounds!” Emily Franklin shouted.

Ms. Yung stood up. “Emily, there is no fire here,” she said. “It’s part of Max’s magic act.” She looked around the room. “Wasn’t that just fantastic, class? Let’s give Max a big hand!”

This time the class clapped louder than before. And Frank had to admit that he hadn’t expected smoke to come out of Max’s hat. But he wanted to see some more tricks before he was really impressed with the class’s new member.

Ms. Yung said, “Now we’ll have an intermission and take the geography quiz I scheduled for today.” She turned to Max. “You don’t have to take it now if you don’t want to, since you didn’t know about it.”

“Oh, that’s no problem, Ms. Yung. I love geography,” Max said. He hung his cape and hat on a coat hook. “In fact, in between my shows I relax by reading geography.”

Callie leaned over and said to Frank, “I can’t decide if I like this kid or not.”

“I know. He’s making it hard. I want to like him,” Frank replied.

The geography quiz was mostly about China, Ms. Yung’s parents’ home country before they moved to the United States. Frank thought he knew all the answers.

After the quiz Ms. Yung made another announcement. “Well, class, I thought I’d let Max treat you to the rest of his magic show before we go out for recess. Would you like that?”

Max headed to the front of the room. He took his cape off the hook and put it around his shoulders. When he set the top hat on his head, though, there was a sound: Cheep! Cheep! Cheep! A silly grin appeared on Max’s face. He took the top hat off, stuck his hand inside it, and pulled out a baby chick. “Well, what do you know?” he said. He showed the chick to the class.

There were several oohs and aahs, and then everyone applauded again.

“My ear is worth more than a penny!” Frank complained.

Max shrugged. “What can I say?” he told the class. “I don’t decide how valuable your ears are. I just pull out whatever coin I find there.”

Frank looked over at Callie. “For some reason I don’t think Max likes me,” he whispered.

Just then the recess bell rang. Everyone started filing out of the classroom.

“Why don’t you put on a magic show for some of the other kids?” Frank asked Max as they started out the door. “I know my brother, Joe, and his friends would really enjoy it!”

Max followed Frank and Callie outside.

Frank spotted Joe and some of his classmates dribbling basketballs on the outside court.

“Joe! Put away the basketballs!” Frank shouted to his brother. “We have a surprise for you.”

Joe and his friends turned and looked at Max dressed in his magician’s outfit.

Max stood under one of the baskets. Joe and his basketball buddies formed a row in front of him. They were soon joined by kids from some of the other classes.

“I’ll introduce you, Max,” Frank whispered. He turned to the audience. “Ladies and gentlemen, I give you the one, the only, Max O’Malley, Magician!” He and Callie began applauding, and they were joined by the rest of the audience.

Then Frank turned to Max and nodded. “The stage is all yours!” he said.

Max went through his usual routine and was an immediate hit. Frank was a little miffed that Max pulled a quarter from Joe’s ear. He was sure Max did it on purpose.

Finally, just as Max was bringing his show to a close, someone called out, “Can you make people disappear?”

Max got a funny look on his face, grinned, then suddenly turned toward Frank. “I can make anyone disappear.”