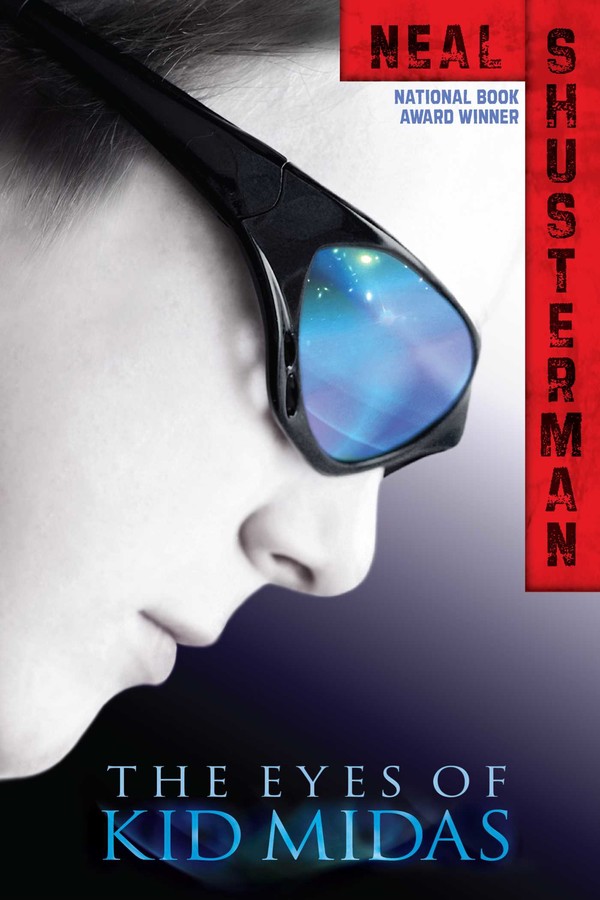 By Neal Shusterman
LIST PRICE $10.99
PRICE MAY VARY BY RETAILER

Kevin Midas is sick of being picked on, teased and tormented. So when he finds a pair of magical sunglasses that give him the power to do--well, anything--he couldn't be happier. At first, Kevin spends his time pulling ice cream cones out of the air and getting every video game he ever wanted. But then he turns to darker wishes. What if he used the glasses to get revenge?

In Neal Shusterman's dark fantasy, one boy finds out that sometimes, getting everything you want can be deadly.

By clicking 'Sign me up' I acknowledge that I have read and agree to the privacy policy and terms of use. Free ebook offer available to NEW CA subscribers only. Offer redeemable at Simon & Schuster's ebook fulfillment partner. Must redeem within 90 days. See full terms and conditions and this month's choices.
A Reading Group Guide for:

Kevin Midas feels he’s not in control of his own life: he’s the current target of Bertram, the school bully (who has nicknamed him “shrimpoid”), and his parents tell him what he can and can’t do. But when he finds a pair of magic sunglasses on a school field trip to a myth-shrouded mountain, everything changes. The glasses somehow turn Kevin’s wishes into reality, and he calls up everything from stereo systems to Lamborghinis. But Kevin soon learns that his wishes can’t be reversed — and it doesn’t take long for his world to go spinning out of control.

• As the story begins, Kevin feels like a victim — of the school bully, of his parents, of everything. When he finds the sunglasses, he feels he is finally the master of his own fate. But is he really? Compare how in control of his life he really is before and after he finds the glasses.

• In some ways, the magic sunglasses are a metaphor for addiction: Kevin feels withdrawal when he takes them off, he feels powerful when he uses them. What are some of the other ways that the sunglasses stand in for addiction?

• Kevin’s friend Josh worries that the glasses are some kind of “galactic charge card,” and soon the bill will come due. What are some of the consequences of Kevin’s actions?

• Kevin uses the power of the glasses to make friends by giving people what they want. Is Kevin simply being generous, or is he bribing people to like him? What’s the difference?

• In the novel, as reality shifts, people’s minds adjust to the changes and they believe the world has always been that way. Can you think of a way you’d be able to tell if your reality were shifting around you?

• Imagine a universe where 2 + 2 = 3. What are some of the differences you think you’d find in a world like that?

• At one point in the story, Bertram’s henchman, Hal, steals the glasses from Kevin. Considering everything Kevin does with the glasses, do you think Hal’s use of them could make things worse? In what ways?

• At the end of the story, Kevin has perfect vision and no longer needs his glasses. How else has he been changed?

• Make a list of all the things you would wish for if you had the sunglasses. In a second column, make a list of the unintended unpleasant consequences you imagine those wishes might have.

• In the novel, Mr. Kirkpatrick, Kevin’s teacher, describes the “Dream Time” as a belief by some native cultures about the impact of dreams on the end of the world. Throughout history, people have had various beliefs about dreams. Choose an ancient or native culture and write a report on their beliefs in dreams.

• The story is called The Eyes of Kid Midas because of parallels to the myth of King Midas. Another obvious influence is The Sorcerer’s Apprentice. Read those and other stories about people whose wishes come true with unfortunate consequences, and write an essay comparing one or more of them to Kid Midas.

• Kevin feels compelled, ultimately against his will, to use the glasses. Obsessive Compulsive Disorder (or OCD) is an actual condition where people feel compelled to do certain things, sometimes over and over again, such as opening and closing a door several times before they can actually go through it. Research actual cases of OCD, and discuss the latest treatments.

• In the novel, dentist Frankie Philpot has a local television show devoted to the supernatural. With a group, produce a short TV talk show segment with a “host” interviewing a “guest” who claims to have proof of some supernatural ability. Then have another “guest” question the validity of the proof.

Neal Shusterman is the New York Times bestselling author of more than thirty award-winning books for children, teens, and adults, including the Unwind dystology, the Skinjacker trilogy, Downsiders, and Challenger Deep, which won the National Book Award. Scythe, the first book in his latest series, Arc of a Scythe, is a Michael L. Printz Honor Book. He also writes screenplays for motion pictures and television shows. Neal is the father of four, all of whom are talented writers and artists themselves. Visit Neal at StoryMan.com and Facebook.com/NealShusterman.

By Neal Shusterman
LIST PRICE $10.99
PRICE MAY VARY BY RETAILER

SEE ALL
See more by Neal Shusterman
Thank you for signing up, fellow book lover!