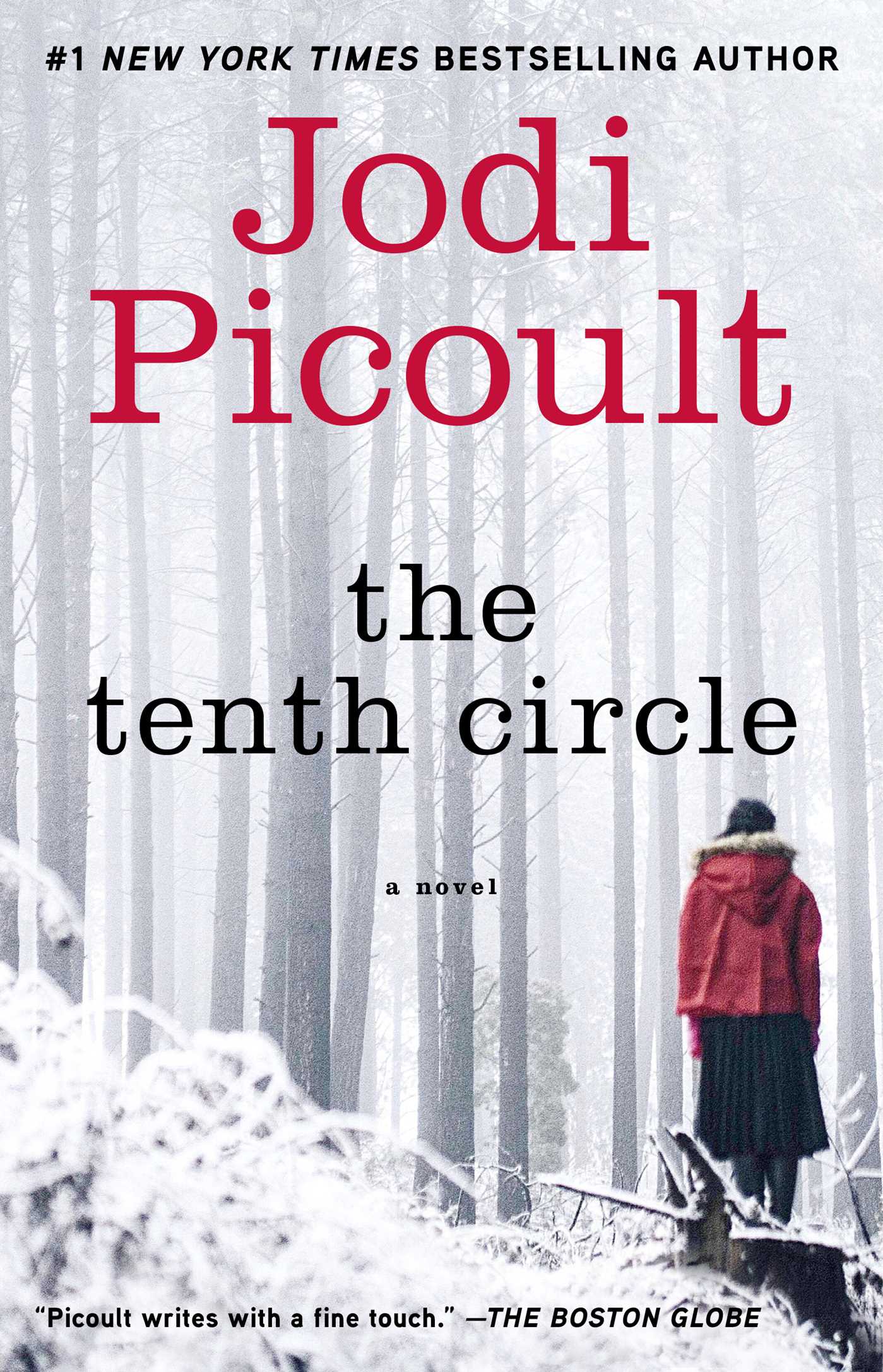 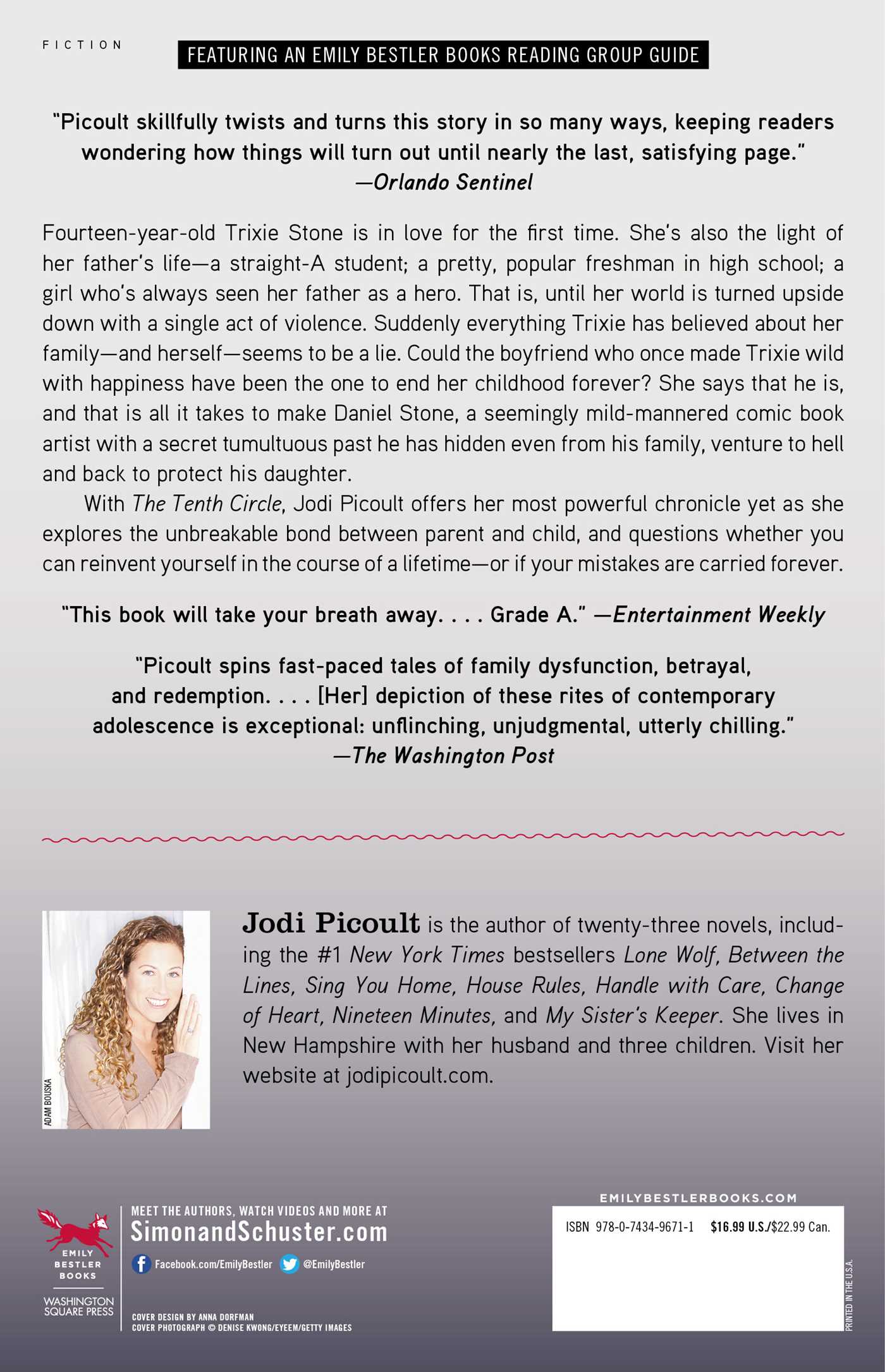 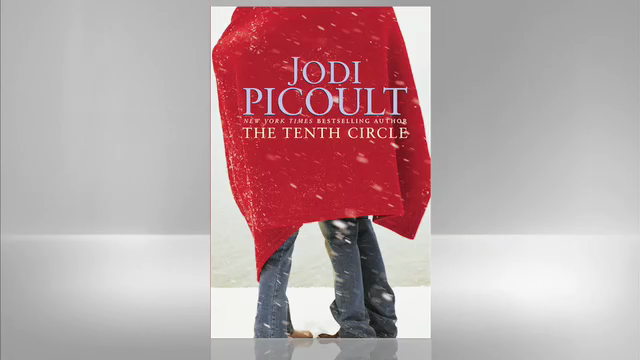 The Tenth Circle
By Jodi Picoult
Read by Carol Monda

From New York Times bestselling author Jodi Picoult, a powerful novel that explores the unbreakable bond between parent and child, and questions whether you can reinvent yourself in the course of a lifetime—or if your mistakes are carried forever.

Fourteen-year-old Trixie Stone is in love for the first time. She’s also a straight-A high school student, pretty and popular, and the light of her father’s life.... Comic book artist Daniel Stone would do anything to protect his daughter. But when a single act of violence shatters her innocence, seemingly mild-mannered Daniel’s convictions are put to the test—while his own shockingly tumultuous past, hidden even from his family, comes to light. Now, everything Trixie’s ever believed about her hero, her father, seems to be a lie as Daniel ventures to hell and back, seeking revenge. Will the price be the bond they share?

By clicking 'Sign me up' I acknowledge that I have read and agree to the privacy policy and terms of use. Free ebook offer available to NEW CA subscribers only. Offer redeemable at Simon & Schuster's ebook fulfillment partner. Must redeem within 90 days. See full terms and conditions and this month's choices.
The Tenth Circle
by Jodi Picoult
ISBN: 0-7434-9670-1
Fourteen-year-old Trixie has been a ghost for fourteen days, seven hours, and thirty-six minutes now, not that she is officially counting. Trixie's protective father has been consumed with attempts to shield her from a new life, one that includes a boy with a proprietary hand around his daughter's waist. But Daniel Stone never for a moment suspected that the same boy might inflict upon his daughter the worst possible harm. Could the boy who once made Trixie's face fill with light when he came to the door have drugged and then raped her? She says that he did, and that is all it takes to make Daniel, a man with a past hidden even from his family, consider taking matters into his own hands in order to protect his daughter.
This is a novel about the unbreakable bond between parent and child, the temptation to play God, and its dangerous repercussions. Using her sensitive, wise touch, Jodi Picoult once again probes deeply into the love and anguish of a young girl and her family. This time, she has added the innovative element of embedding a graphic novel within her text. They are at once the professional work of her character, Daniel Stone, and a unique insight into his fractured and desperate heart.

The Tenth Circle
Group Discussion Questions
1. In Chapter One, Laura says "God, according to Dante, was all about motion and energy, so the ultimate punishment for Lucifer is to not be able to move at all." (p. 16) How do you feel about this concept of hell as the inability to take action? What do you take from this? How does this theory translate into modern-day life?
2. Why does Daniel find villains interesting? Daniel describes Duncan as "a forty-something father who knew that getting old was hell. Who wanted to keep his family safe; whose powers controlled him, instead of the other way around." If "power always involved a loss of humanity," then how does this comic book character maintain his humanity? Compare and contrast Daniel with the character he creates in his comic strip.
3. Early on, Daniel and Trixie seem to have the ideal father-daughter relationship. During Trixie's examination, Daniel reflects that he and Trixie would play the alphabet game with superhero powers. What superhero powers did Daniel wish he had? Why do you think these were so important to him? What does that reveal about his character? Trixie's?
4. It is said that a rape victim is revictimized by the initial examination. Do you think this is true for Trixie? Why do you think the police detective doubts her accusation against Jason?
5. In popular culture, the husband is more often portrayed as the cheater, and the wife typically as the one who makes career sacrifices for the family. Does Daniel as a character seem emasculated by the way these roles are reversed in The Tenth Circle? Why are stay-at-home fathers seen differently by society than mothers who raise their children full time?
6. In Chapter Four, regarding trauma, Picoult writes, "It was a catch-22: If you didn't put the trauma behind you, you couldn't move on. But if you did put the trauma behind you, you willingly gave up your claim to the person you were before it happened." Which characters would agree with this statement and why?
7. Trixie is consistently revictimized at school, and her own best friend doesn't believe that she was raped. If Trixie's school was a kind of hell for her, then what would Dante say about her situation and the best way to get out of it?
8. Discuss reality versus perception, intention versus action. Why are Trixie's and Jason's versions of what happened so different? Whose do you believe is the truth? Do you think there IS a definitive truth?
9. After Laura and Daniel have a romantic episode, Daniel continues to express his resentment for her infidelity. In that moment his sexual urge is not to make love to her but to "take her back." How does his urge compare to Jason's urge in raping Trixie?
10. Throughout the story Trixie is struggling to get back to her life prior to the rape, and similarly Daniel and Laura are trying to return to a place in their marriage prior to Laura's infidelity. What does this story say about whether or not we can recapture our past? How does Daniel's childhood figure into this theme?
11. Does a victim get justice when the perpetrator takes his or her own life? When Daniel abuses Jason, is he helping or hurting Trixie? When Trixie runs away, did you believe that she killed Jason? What did you think about this surprise ending? How can you map the breakdown in trust between these relationships: Trixie and Jason, Laura and Daniel, Daniel and Trixie, Trixie and Zephyr. How has this breakdown contributed to the demise of all parties?
12. How did Daniel's artwork, embedded inside The Tenth Circle, affect your reading experience? In what ways does reading the graphic novel give you insight into Daniel's behavior during the narrative part of the novel?
13. In the story there is a thread of control -- characters losing and gaining control over their lives and their environments. Discuss what control means to each character.
14. After Daniel takes his revenge, does he believe he is more of a superhero? Does he really think he has avenged Trixie? What is the story saying about retribution?
15. Why is snow symbolic in the story? What other symbols are there?
16. Trixie is haunted by Jason's ghost. Is this a figment of her imagination or a manifestation of guilt?

The Tenth Circle
Reading Group Tips
1. Research Dante; one great website is http://www3.iath.virginia.edu/dante/
2. List some interesting tidbits about the first comic book superheroes (refer to http://www.geocities.com/Athens/8580/Hist1.html for some great information)
3. For more information on Jodi Picoult and to sign up for her newsletter, visit http://www.jodipicoult.com/. Be sure to listen to her discuss The Tenth Circle in her AuthorBytes presentation, and to read the conversation with her about the research behind the novel.

"Picoult is a master of the craft of storytelling." -- Houston Chronicle

"Picoult skillfully twists and turns this story in so many ways, keeping readers wondering how things will turn out until nearly the last, satisfying page." -- Orlando Sentinel

"This book will take your breath away. . . . Grade A." -- Entertainment Weekly