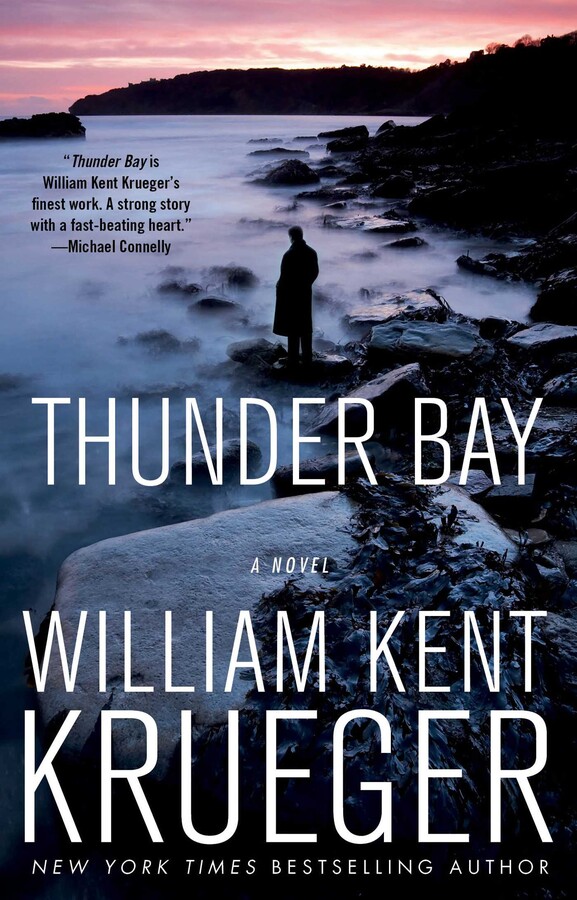 
The promise, as I remember it, happened this way.

Happy and content in his hometown of Aurora, Minnesota, Cork O'Connor has left his badge behind and is ready for a life of relative peace, setting up shop as a private investigator. But his newfound state of calm is soon interrupted when Henry Meloux, the Ojibwe medicine man and Cork's spiritual adviser, makes a request: Will Cork find the son that Henry fathered long ago?

With little to go on, Cork uses his investigative skills to locate Henry Wellington, a wealthy and reclusive industrialist living in Thunder Bay, Ontario. When a murder attempt is made on old Meloux's life, all clues point north across the border. But why would Wellington want his father dead? This question takes Cork on a journey through time as he unravels the story of Meloux's 1920s adventure in the ore-rich wilderness of Canada, where his love for a beautiful woman, far outside his culture, led him into a trap of treachery, greed, and murder.

The past and present collide along the rocky shores of Thunder Bay, where a father's unconditional love is tested by a son's deeply felt resentment, and where jealousy and revenge remain the code among men. As Cork hastens to uncover the truth and save his friend, he soon discovers that his own life is in danger and is reminded that the promises we keep - even for the best of friends - can sometimes place us in the hands of our worst enemies.

By clicking 'Sign me up' I acknowledge that I have read and agree to the privacy policy and terms of use. Free ebook offer available to NEW CA subscribers only. Offer redeemable at Simon & Schuster's ebook fulfillment partner. Must redeem within 90 days. See full terms and conditions and this month's choices.
Introduction
In the seventh outing in this award-winning series, we find that Minnesota lawman Cork O'Connor has hung up his sheriff's badge in order to set up shop as a private detective. When his beloved mentor Henry Meloux asks for his help in finding the son he never knew, Cork drops everything in order to help him. But when someone attempts to kill Henry, it becomes very apparent that perhaps his son doesn't want to be found. Cork and Henry find themselves in the middle of a mystery that leads straight to a wealthy, eccentric businessman. The men travel to remote Thunder Bay, Ontario, in the hopes of figuring out the truth before anyone else gets hurt.
Questions and Topics for Discussion
1. Cork O'Conner has recently hung up his sheriff badge in favor of a small private investigation firm, and is faced with a case for his beloved mentor, Ojibwe healer Henry Meloux. Why do you think Cork owes such a debt to Henry? Cork can tell this particular case means a great deal to Henry: "Meloux had never seen his own son. Never carried him on his shoulders or held him when he cried. Never felt the small boy's breath, warm and sweet smelling, break against his face. Never knew the pleasures of being for his son the slayer of monsters imagined in the night." (p.18) Do you think Henry's plight carries considerably more weight because of what Cork is dealing with in his own life, with his teenaged daughter, Jenny?
2. Maria deeply desires that she and Henry have a relationship like Maurice and Hummingbird's. What obstacles keep them from being truly accepted as a couple? Why do you think Henry was so distrustful of the "white man?"
3. How are Maurice, the gentle mountain-man, and Henry similar? Despite his discovery of gold, Maurice cared little for it. What do you think was most important to him? He tells Henry about the "Path of Souls:" "Hummingbird told me about the Path of Souls. She told me she would be waiting for me at the end...I want to be on the Path of Souls. I want to be with Hummingbird." (p.167) Henry is familiar with this Indian version of Heaven. What about it appeals to him?
4. What is the significance of the gold watch? Do you think Maria left it behind on purpose when Wellington forced her to leave the camp?
5. After Leonard Wellington abruptly leaves the camp, Henry has a powerful vision: "The silhouette that appeared was much larger than a man. It didn't worry him. He stood to meet his enemy...He'd become a hairy beast, massive as a bear. He felt empty inside, except for an icy ball where his heart should have been. He was ravenous, hungrier than he ever remembered, and he could not wait to rip out Wellington's heart and feast on it." (p.174) What was your first impression after reading this passage? What role do visions play in the story?
6. In Chapter 45, Cork muses: "To be a son, to be a father, these things were more than just a blood tie. Maybe that's what the hesitation was about. Did the relationship matter if, in the end, Wellington didn't give a damn?" (p.251) Do you think Cork is implying that he's worried about Meloux being disappointed? What really defines a father/son relationship? How does Cork's own situation with his daughter, Jenny, relate to Henry's, if at all?
7. Why do you think Meloux was relieved when he discovered that Leonard learned about Maurice and his gold from reading Maria's journals?
8. Rupert confidently tells Cork, Henry and Wally Schanno that "a man's reach should exceed his grasp; else what's a heaven for?" (p.269) What do you think he means by this. Do you recognize this quote? (Hint: you can find out who said it on www.brainyquote.com)
9. Have you read others in the Cork O'Connor series? After reading Thunder Bay, are you intrigued enough to read another one of Cork's adventures? Which storyline did you prefer: the contemporary mystery or Henry's story of how he met Maria Lima?
10. One of the most captivating elements in Kent Krueger's novels is his depiction of strong, memorable characters. Who do you think is the most complex character in the novel, and why? What did you think of the subplot involving Cork's daughter's pregnancy? What did this bring to the novel?
11. Many Ojibwe words are scattered throughout the book. Did you feel like you learned something about Native American culture from this novel? If so, what did you learn? What about Henry's role as a mide (or healer). How does this figure into the story? Is there something comparable in western culture?
Tips to Enhance Your Book Club:
1. Ojibwe words are scattered throughout Thunder Bay. You and your book club can learn more at this site: http://www.native-languages.org/ojibwe_words.htm
2. If your book club meets for dinner, why not try one of these Native American recipes, like Ojibwe spicy meat pies, to compliment your discussion? http://www.native-american-online.org/food.htm
3. You can learn more about scenic Thunder Bay, Ontario here: http://www.thunderbay.ca/
4. Learn more about William Kent Krueger and his books at http://www.williamkentkrueger.com

William Kent Krueger is the New York Times bestselling author of This Tender Land, Ordinary Grace (winner of the Edgar Award for best novel), as well as eighteen acclaimed books in the Cork O’Connor mystery series, including Desolation Mountain and Sulfur Springs. He lives in the Twin Cities with his family. Learn more at WilliamKentKrueger.com.

“One of today’s automatic buy-today-read-tonight series… thoughtful but suspenseful, fast but lasting, contemporary but strangely timeless. Krueger hits the sweet spot every time.”

"Thunder Bay is William Kent Krueger's finest work. A strong story with a fast-beating heart, this is the kind of novel that will bring many new readers knocking on Cork O'Connor's door. Count me as one of them."

"William Kent Krueger is one of the best mystery writers out there, and Thunder Bay is his most powerful novel to date. Any reader who has yet to pick up one of his Cork O'Connor suspense novels is in for a rare treat."

"Thunder Bay has everything that William Kent Krueger's longtime fans have come to expect in this lovely series - and everything it needs to entice new readers into the fold. Steeped in place, sweetly melancholic in tone, it braids together multiple stories about love, loss, and family. The result is a wholly satisfying novel that is over almost too soon."

"William Kent Krueger has one of the most fresh and authentic voices in crime fiction. In Thunder Bay he uses it to tell a resonant, gripping story. Don't miss this book."

– S.J. Rozan, Edgar Award-winning author of In This Rain