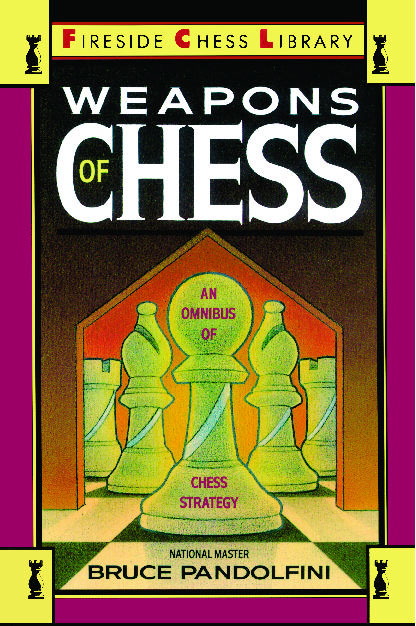 Weapons of Chess: An Omnibus of Chess Strategies

From America’s foremost chess coach and game strategist for Netflix’s The Queen’s Gambit, Bruce Pandolfini brings us the most accessible and easy-to-use chess strategy book ever.

Written for beginning and intermediate players, Weapons of Chess is the first encyclopedia of chess strategies that doesn't rely on the usual baffling chess notation. There are no symbolic chess moves, no charts or sequences in chess notation: every move is explained in words.

Arranged alphabetically for easy use and based mainly on pawn formation, the incredibly detailed and thorough entries in this book talk a player through dozens of common strategic dilemmas, such as "doubled pawn," "bishops vs. knights," and "hanging pawn pair." Diagrams illustrate the terms, first showing the basic position and then strategically moving to more complicated versions of it. Players will learn how to formulate plans once they have reached a middlegame, enabling them to make wiser strategic decisions after the first few moves of the game.

Designed for use as a ready reference during actual practice games, and usable without a chess board, Weapons of Chess is a unique and invaluable resource for any developing chess player.

Any factor that increases your winning chances is an advantage. The player who has the most such factors in his or her favor has the advantage in the game; that is, the better winning chances.

Specific advantages fall into categories. For instance, if you have fewer weaknesses than your opponent, you probably have an advantage in pawn structure. In Diagram 1, since White's pawns are in fewer groups than Black's, they are easier to guard. Black's pawns have more weaknesses.

If you have more pieces developed than your opponent, you probably have an advantage in time. White has a large edge in development in Diagram 2.

Note that White has one less pawn than Black. In order to capture the White b-pawn, Black wasted valuable time and moved the queen several times. As a result, Black now has only three developed pieces, while White's seven pieces are all in action. This gives White a winning superiority in time.

Control of the center, more advanced pawns, rooks on open and half-open files -- these are some indicators of an advantage in space. In Diagram 3, White's spatial edge is significant.

If you have more men or more valuable men than your opponent, you have an advantage in material. In Diagram 4, White has an extra pawn but Black has a rook compared with White's knight. Black therefore has a slight material advantage.

If your king is less exposed than your opponent's, you probably have an advantage in king safety. In Diagram 5, White's king is securely castled. Black's is stuck in the center and dangerously exposed.

Positional advantages, such as control of the center, good pawn structure, controlling open or half-open files, and obtaining a safe position for the king, change constantly throughout the game. When you play positionally, you are trying for small advantages -- and sometimes your opponent either doesn't realize what you are doing or doesn't consider those advantages important. But although those little advantages may not amount to much individually, when they're accumulated and cultivated, they can eventually add up to a real positional superiority. To neutralize these advantages your opponent may have to surrender material or submit to a strong attack on his king.

Material advantages, such as trading a knight for a rook, or a queen for two minor pieces, keeping a good bishop, or trading a bad bishop are usually the most decisive.

Advantages in material and pawn structure tend to be more permanent than temporal advantages. If you have an extra pawn, unless something radical happens you will probably still have it ten moves later. Thus, some advantages are more useful, practically speaking, while others are harder to turn into a win.

Try to build your game and increase your overall advantages. Reduce the weaknesses in your own position and increase those in your opponent's. To do this, you must be able to evaluate correctly. You must know how to analyze a chess position. 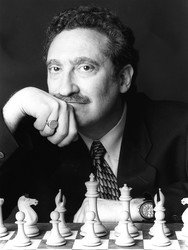 Bruce Pandolfini is one of the world’s most sought-after chess teachers and one of the most widely read chess writers working today. His role as analyst for PBS’s coverage of the 1972 match between chess superstars Bobby Fischer and Boris Spassky first launched him into the public eye. His coaching of chess prodigy Josh Waitzkin was portrayed in the book and film Searching for Bobby Fischer. He is a regular columnist for Chess Life, the bible of the chess world, and continues to coach young players professionally and consults for CEOs from numerous Fortune 500 companies. Pandolfini also created over 300 hypothetical games as a consultant for Netflix’s The Queen’s Gambit. He lives in New York City.

Weapons of Chess: An Omnibus of Chess Strategies

SEE ALL
See more by Bruce Pandolfini
Thank you for signing up, fellow book lover!