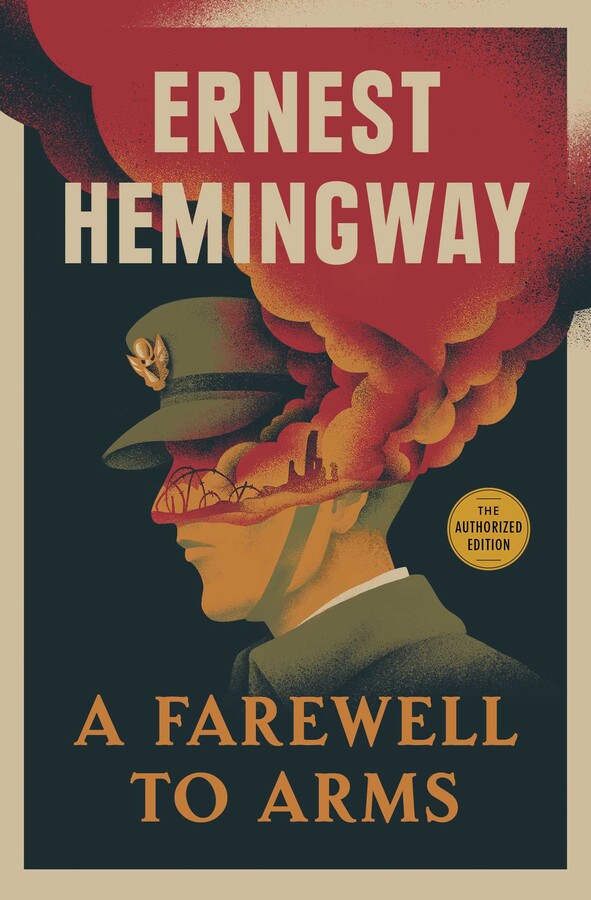 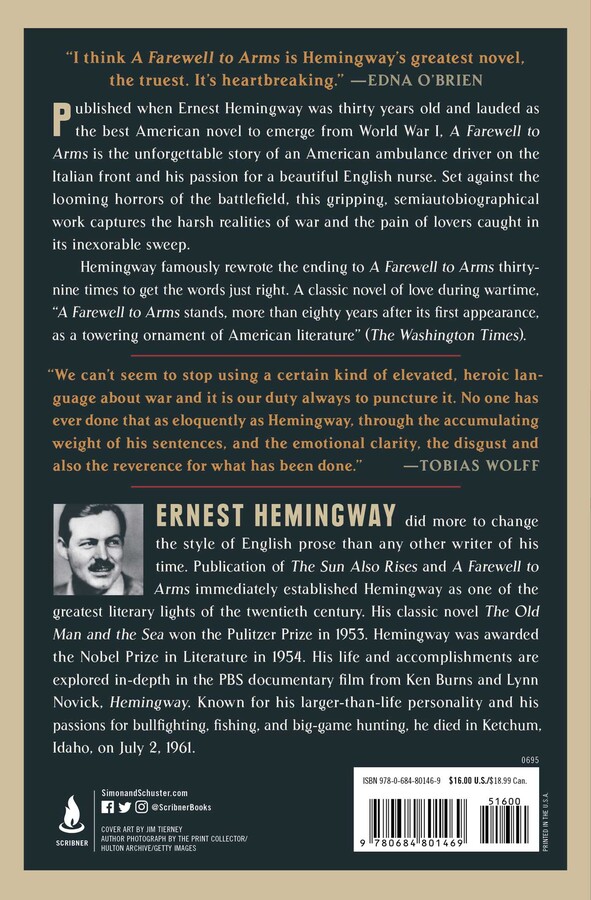 The best American novel to emerge from World War I, A Farewell to Arms is the unforgettable story of an American ambulance driver on the Italian front and his passion for a beautiful English nurse.

The best American novel to emerge from World War I, A Farewell to Arms is the unforgettable story of an American ambulance driver on the Italian front and his passion for a beautiful English nurse. Hemingway’s frank portrayal of the love between Lieutenant Henry and Catherine Barkley, caught in the inexorable sweep of war, glows with an intensity unrivaled in modern literature, while his description of the German attack on Caporetto—of lines of fired men marching in the rain, hungry, weary, and demoralized—is one of the greatest moments in literary history. A story of love and pain, of loyalty and desertion, A Farewell to Arms, written when he was thirty years old, represents a new romanticism for Hemingway.

In the late summer of that year we lived in a house in a village that looked across the river and the plain to the mountains. In the bed of the river there were pebbles and boulders, dry and white in the sun, and the water was clear and swiftly moving and blue in the channels. Troops went by the house and down the road and the dust they raised powdered the leaves of the trees. The trunks of the trees too were dusty and the leaves fell early that year and we saw the troops marching along the road and the dust rising and leaves, stirred by the breeze, falling and the soldiers marching and afterward the road bare and white except for the leaves.

The plain was rich with crops; there were many orchards of fruit trees and beyond the plain the mountains were brown and bare. There was fighting in the mountains and at night we could see the flashes from the artillery. In the dark it was like summer lightning, but the nights were cool and there was not the feeling of a storm coming.

Sometimes in the dark we heard the troops marching under the window and guns going past pulled by motor-tractors. There was much traffic at night and many mules on the roads with boxes of ammunition on each side of their pack-saddles and gray motor trucks that carried men, and other trucks with loads covered with canvas that moved slower in the traffic. There were big guns too that passed in the day drawn by tractors, the long barrels of the guns covered with green branches and green leafy branches and vines laid over the tractors. To the north we could look across a valley and see a forest of chestnut trees and behind it another mountain on this side of the river. There was fighting for that mountain too, but it was not successful, and in the fall when the rains came the leaves all fell from the chestnut trees and the branches were bare and the trunks black with rain. The vineyards were thin and bare-branched too and all the country wet and brown and dead with the autumn. There were mists over the river and clouds on the mountain and the trucks splashed mud on the road and the troops were muddy and wet in their capes; their rifles were wet and under their capes the two leather cartridge-boxes on the front of the belts, gray leather boxes heavy with the packs of clips of thin, long 6.5 mm. cartridges, bulged forward under the capes so that the men, passing on the road, marched as though they were six months gone with child.

There were small gray motor cars that passed going very fast; usually there was an officer on the seat with the driver and more officers in the back seat. They splashed more mud than the camions even and if one of the officers in the back was very small and sitting between two generals, he himself so small that you could not see his face but only the top of his cap and his narrow back, and if the car went especially fast it was probably the King. He lived in Udine and came out in this way nearly every day to see how things were going, and things went very badly.

At the start of the winter came the permanent rain and with the rain came the cholera. But it was checked and in the end only seven thousand died of it in the army.

Reading Group Guide for A Farewell to Arms
Introduction
Ernest Hemingway was born July 21, 1899, in Oak Park, Illinois. After graduation from high school, he moved to Kansas City, Missouri, where he worked briefly for the Kansas City Star. Failing to qualify for the United States Army because of poor eyesight, he enlisted with the American Red Cross to drive ambulances in Italy. He was severely wounded on the Austrian front on July 9, 1918. Following recuperation in a Milan hospital, he returned home and became a freelance writer for the Toronto Star.
In December of 1921, he sailed to France and joined an expatriate community of writers and artists in Paris while continuing to write for the Toronto Star. There his fiction career began in "little magazines" and small presses and led to a volume of short stories, In Our Time (1925). His novels The Sun Also Rises (1926) and A Farewell to Arms (1929) established Hemingway as the most important and influential fiction writer of his generation. His later collections of short stories and For Whom the Bell Tolls (1940) affirmed his extraordinary career while his highly publicized life gave him unrivaled celebrity as a literary figure.
Hemingway became an authority on the subjects of his art: trout fishing, bullfighting, big-game hunting, and deep-sea fishing, and the cultures of the regions in which he set his work -- France, Italy, Spain, Cuba, and Africa.
The Old Man and the Sea (1952) earned him the Pulitzer Prize and was instrumental in his being awarded the Nobel Prize in 1954. Hemingway died in Ketchum, Idaho, on July 2, 1961.
Description
Lieutenant Frederic Henry, an American assigned to a Red Cross ambulance unit in Italy, is severely wounded on the Austrian front and sent to a hospital in Milan, where he falls in love with his English nurse, Catherine Barkley. When he returns to the front, the war goes badly, and Frederic joins a retreat from Caporetto in which he barely escapes execution at the hands of Italian battle police. He deserts the army, returns to Milan, goes on to Stresa, joins now-pregnant Catherine Barkley, and avoids capture by rowing across the lake to Switzerland, where they live an idyllic life until Catherine delivers a still-born child and dies, and Frederic walks back to his hotel in the rain, alone.
Discussion Questions
1. How does the first chapter of A Farewell to Arms set a tone and mood which anticipate subsequent events? Why does the narrator move the reader through a change of seasons from late summer to autumn and on to winter? What are the major images in the chapter, and what is the effect of the understatement in the final sentence (p. 4)?
2. During Lt. Frederic Henry's early visits with Catherine Barkley, Catherine says as they touch each other and speak of love, "This is a rotten game we play, isn't it"? (p. 31). How should one characterize Frederic's early "love" for Catherine? What does the initial stage of their relationship reveal about the effect of the war upon their lives?
3. What perspective regarding love does the priest from Abruzzi provide, and why do officers bait him during meals? Frederic says the priest "had always known what I did not know and what, when I learned it, I was always able to forget. But I did not know that then, although I learned it later" (p. 14). Is Frederic's observation borne out in the novel?
4. Why are the Italian soldiers disillusioned with the war? How is Frederic's leap into the river to escape the battle police a symbolic demarcation in the novel? What extended meaning do we find in his statement, "It was not my show any more..."(p. 232)? Does Catherine represent for Frederic refuge, peace, and "home" in its fullest sense? How?
5. Is A Farewell to Arms "a study in doom," as it has sometimes been called? How is Frederic's recollection of the ants on the burning log relevant to questions about God and faith raised in the novel? What do you believe Frederic has learned, or perhaps become resigned to, in this novel of love and war?

After Reading the Novel
The critic Allen Tate read A Farewell to Arms in Paris in 1929 and called it a masterpiece. Fewer than three months after its publication it had sold 45,000 copies and headed many bestseller lists. Many consider it Hemingway's best novel. You may wish to look at early sketches which inspired portions of A Farewell to Arms, especially the "Miniatures" which introduce Chapters 6 and 7 of In Our Time, or at short stories which evolved from Hemingway's World War I experiences such as "In Another Country" (1927), "Now I Lay Me" (1927), and "A Way You'll Never Be" (1933), all available in The Short Stories of Ernest Hemingway. Since the rise of feminist criticism, much has been written about Hemingway's female characters, especially Catherine Barkley, whom some reject as unflatteringly submissive. There is considerable division over this issue, and the subject is worthy of exploration. A 1957 Hollywood movie version of A Farewell to Arms stars Rock Hudson and Jennifer Jones. A more recent film, loosely based upon Hemingway's war experiences in Italy, starring Chris O'Donnell and Sandra Bullock, is also available.