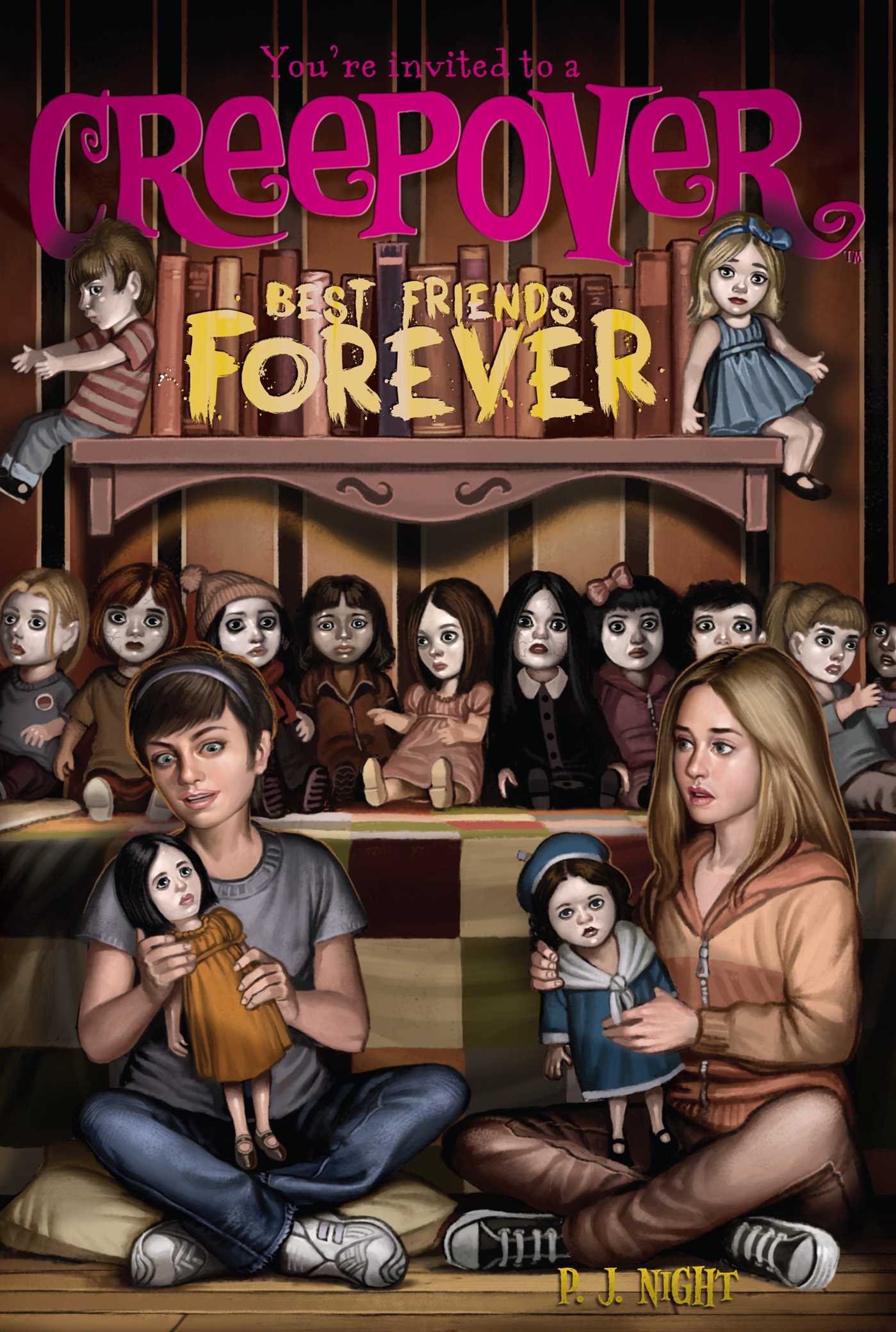 Katie’s getting a new BFF—whether she likes it or not—in this scary You’re Invited to a Creepover tale.

Katie Walsh is majorly bummed when her BFF moves away. But her hopes soar when the new girl at school, Whitney, befriends her right away and invites her to spend the night at her house for a sleepover. Katie loved sleepovers with her old BFF, so she’s sure she will have a great time. But Katie doesn’t have a great time. Something is not quite right at Whitney’s house. Whitney seems really, really into her dolls…and later that night, Katie’s convinced that the dolls are threatening her.

The next morning, a freaked-out Katie decides that maybe she hasn’t found a new best friend, after all. Whitney, however, has made up her mind about Katie—they’re going to be best friends forever…no matter what.

This too-close-for-comfort friendship tale is ranked a 5 on the Creep-o-Meter.


That same Saturday, but hours later, in a house across town, Katie Walsh carefully applied shiny white nail polish to her best friend Amy Fitzgerald’s thumbnails. She blew on them until they were dry, then added a large perfect yellow dot in the center of each. Ta-da—a sunny-side-up manicure!

“Ha! Breakfast. I love it,” said Amy, opening her eyes and admiring her eggy thumbs. “Now you should make my fingernails into bacon.” Katie had planned on painting them beige, to be like toast, but bacon was way better. Amy was so good at themed manicures!

Katie smiled and selected exactly the right three shades of brown and beige from Amy’s collection of about fifty colors, and went to work painting bacon-y stripes on Amy’s fingernails.

When Katie had finished, Amy blew on the bacon to dry it as Katie thought about eating breakfast with the Fitzgeralds tomorrow morning. It would be their last breakfast together for a long time because Amy and her family were moving from Westbrook, Connecticut, to California.

“Hey, leave it on till October, okay?” Katie said. “Keep it on till you come back to visit for Harvest Fair. And whatever you paint on my nails, I’ll leave that on too. Till Harvest Fair. Which, did you realize, happens to be my birthday weekend this year? Then we’ll give each other brand-new manicures.”

“Of course I will,” Amy said, tears springing to her eyes. “I’ll cover it in clear polish if it starts to chip or wear off. And wait till you see how I’m going to do your nails on your birthday. I already have your birthday manicure planned.”

Katie fought back tears of her own. “I’ll cover my fingertips in Band-Aids if I have to, to keep mine on till then!” She forced a laugh. They had both promised that this slumber party would be tear free until the last possible moment, when the moving van came in the morning.

Harvest Fair felt so far away. Next week she’d start seventh grade … without Amy. Katie had lived next door to Amy since kindergarten, and they had always been in the same class.

Now it was Amy’s turn to go to work on Katie’s nails. She made Katie keep her eyes closed the entire time, even when she was blowing on them between colors. Katie was dying of curiosity, and it seemed to take forever. “Give me a hint,” she kept saying. But Amy was being very strict. Finally she said, “Okay, open.”

On each nail was something different. Her thumbs were watermelon slices: juicy pink background with green “rind” on the white part of the nail, and itty-bitty black dots for seeds. Her index fingernails were red-and-black ladybugs. Her middle fingernails were tiny rainbows. Her ring fingernails were painted like miniature sunsets of pink, orange, purple, and red. And her pinkies were two different shades of blue, with both pearly and matte white painted unevenly on the tips, for waves. It was Amy’s best manicure ever.

“It’s the ‘favorite summer things’ manicure,” Amy explained. “So you can remember them all fall, till I come back in October.”

“I don’t know what to say,” Katie told Amy. “I love it.” She blew on each finger separately, carefully, as though she were preserving it forever. “Thanks.”

“How many sleepovers have we had altogether?” Amy asked suddenly. “Do you think it’s more than a hundred?” Since their houses were so close, it was easy to have a sleepover every weekend. Sometimes even on school nights.

“Just in sixth grade we’ve had one almost every week,” said Katie, doing quick math in her head. “That’s fifty-two right there. So yeah, way more than a hundred.”

Amy clapped her hands the way she did when she was really happy. But she didn’t look happy. “That’s awesome, K,” she said. They’d been calling each other “K” and “A” since the beginning of sixth grade. “We should have kept track so when we got to a hundred we could’ve had a special one or something. I can’t believe we’re only going to have them a few times a year now.” Her voice broke.

“But we’ll have a really good one for my birthday,” Katie said quickly and a little more forcefully than she meant to. She supposed she was just determined not to cry. She grabbed a bottle of beige nail polish. “Okay, take off your socks. The chef is now ready to make your toes into waffles.”

Katie didn’t sleep well, though Amy seemed to. Amy had a trundle bed that her parents had bought just so she could have sleepovers with Katie. The bottom part of the bed pulled out to reveal a mattress that Katie slept on. It felt so good to have her own bed there—she never even needed to bring a sleeping bag like a regular slumber party.

They were both only children, and Katie thought that this might be what it was like to have a sister. Amy’s parents always tucked them both in, and Katie’s parents did the same when Amy slept over, though the sleepovers happened more frequently at Amy’s because of the excellent trundle bed.

Amy’s mom came in to wake them up early so they could all sit down to breakfast before the movers came. At first Katie forgot where she was. Then she felt happy to see Amy next to her, slowly wiggling herself awake. Then all at once she remembered the terrible truth: It was moving day. It was actually going to happen.

Today. This morning, in fact.

Amy’s dad brought in breakfast from the Westbrook Diner. It was a sampling of their favorites: bacon and eggs, waffles, and banana-blueberry pancakes. Everyone ate a little of everything, and they ate off paper plates and used plastic utensils because all the kitchen stuff was already packed up.

Not that that was so new. Over the past several weeks Katie had been watching the inside of Amy’s house slowly disappear. All the things she’d known and loved for so long were gone now. The wooden clock shaped like an apple with a second hand that had a bumblebee at the tip. The row of ferns on the kitchen windowsill. The big bowl of pine cones on the coffee table, picked by Amy’s mom from the woods in the backyard. The framed crayon-and-watercolor picture of an owl that Amy had made in third grade when their class was studying owls. (Katie had made one too, and it was displayed in her own kitchen.) Katie had been getting sad every time she walked in the house and something new was packed up. It was as though something big and permanent in the town, like the fire station or the post office, had suddenly been torn down.

Soon the movers were carrying boxes and Amy and Katie were sitting on the back steps so they didn’t have to watch.

Katie heard one of the movers talking to Amy’s dad. “California, huh?” he said. “Can’t get much farther from Connecticut than that, I guess!” The mover laughed as if it were the funniest thing ever.

Katie covered her face with her hands and began crying.

Amy put her arm around Katie’s shoulders. “It doesn’t matter how far away we are,” she whispered. Katie could hear that Amy was crying too. “We’re best friends. We’re best friends forever.”

Katie nodded, her head still in her hands. “I know,” she tried to say. But she couldn’t get the words out.
P.J. Night

A lifelong night owl, P.J. Night often works furiously into the wee hours of the morning, writing down spooky tales and dreaming up new stories of the supernatural and otherworldly. Although P.J.’s whereabouts are unknown at this time, we suspect the author lives in a drafty, old mansion where the floorboards creak when no one is there and the flickering candlelight creates shadows that creep along the walls. We truly wish we could tell you more, but we’ve been sworn to keep P.J.’s identity a secret…and it’s a secret we will take to our graves!

More books in this series: You're invited to a Creepover