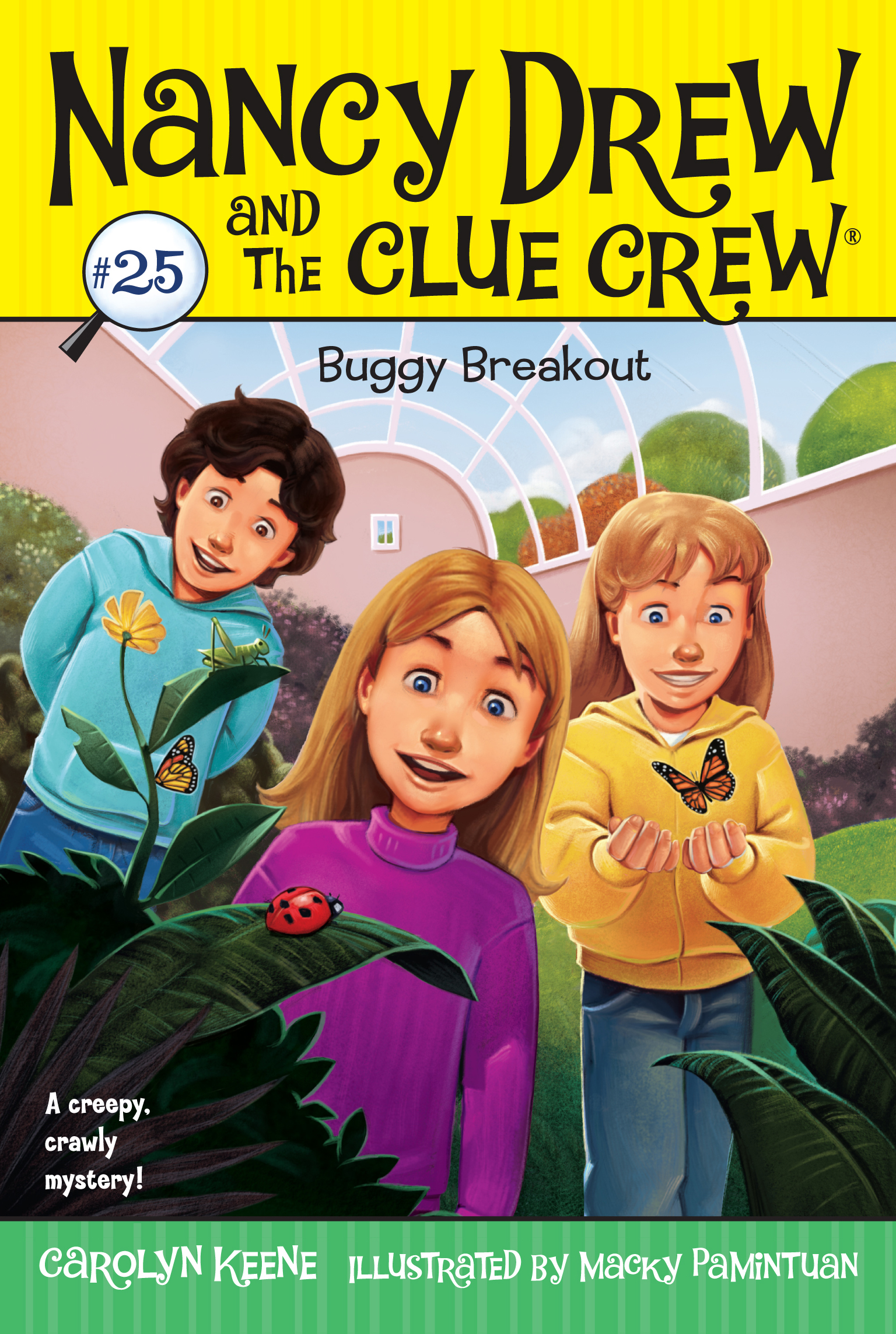 In Buggy Breakout, spring has sprung, bringing...bugs? The Clue Crew must use their best detective skills to recover the Bug Club’s prize insect.

“I love Bug Week!” Nancy Drew said, doing a little skip as she walked down the hall toward class.

“Me too!” her friend George Fayne piped up.

“Me three!” Bess Marvin added. “Check out my cool bug outfit!” She twirled around, showing off the red ladybugs on her white T-shirt. The pockets of her jeans were embroidered with different-colored butterflies.

Nancy giggled. Leave it to Bess to come up with a fashion statement about bugs. Bess was way into clothes. George, Bess’s cousin, was more into sports.

This week was Bug Week for the third graders at River Heights Elementary School. The girls’ teacher, Mrs. Ramirez, was teaching the students all about insects.

The day before, they had watched a cool movie about common bugs and their habitats, or homes. Today they were going to make bug posters, and tomorrow they were going on a field trip to the new River Heights Insectarium. Nancy couldn’t wait!

The three girls walked into the classroom and took their seats. The rest of the students were already sitting down. Up front, Mrs. Ramirez was writing some words on the blackboard:

The teacher turned around. “Can anyone tell me what’s so important about these three things?”

“Yes, Michael D.?” Mrs. Ramirez said. She called him that because there was another Michael in the class: Michael Lawrence, or Michael L.

Michael D. sat up very straight. “All insects have a head, a thorax, and an abdomen. What is a thorax? A thorax is the part of the body between the head and the abdomen.” He spoke precisely, like a scientist.

“Very good, Michael D.,” said Mrs. Ramirez. “Can anyone tell me what—”

“Insects have other things in common too,” Michael D. interrupted. “Like three pairs of jointed legs, two antennas, compound eyes, and a hard exoskeleton. What are compound eyes? Compound eyes are eyes that are made up of lots and lots of simple eyes. With compound eyes, insects can look in many different directions at the same time. What is an exoskeleton? An exoskeleton is a skeleton that’s on the outside of the body instead of the inside. Like a turtle’s shell.”

Nancy stared at Michael D., impressed. He sure knew a ton of stuff about bugs!

“Very good, Michael D.,” Mrs. Ramirez said. “Can anyone tell me if spiders are insects?” Michael D.’s hand flew into the air. “Someone other than Michael D., that is,” she added.

Luna Valeri raised her hand. “Um … they’re insects? I hate them because they’re creepy-crawly and supergross.”

“Hmm. They’re definitely creepy-crawly. But are they insects? Anyone else?” Mrs. Ramirez peered around the room.

Sonia Susi put her hand up. “Actually, they’re not insects. They don’t have antennas. And they don’t have compound eyes.” She turned to Luna. “I’m kind of scared of them too,” she said with a grin.

“That’s right, Sonia,” said Mrs. Ramirez. “All right, class. I’m going to pass out some poster board and markers. We’re going to make posters of our favorite, or not-so-favorite, bugs. First you will pick a bug to be your subject. Then you’re going to draw your bug and label its head, thorax, and abdomen. You will label its other parts too, like its antennas, eyes, and wings—that is, if your insect has wings. Who can name an insect that has wings?”

Michael D. leaned across the aisle. “You forgot wasps,” he whispered. “And butterflies. And moths. And dragonflies. And—”

“She said an insect,” Nancy whispered back.

“Very good, Nancy,” said Mrs. Ramirez. “While I pass out the supplies for your posters, why don’t you all start thinking about what bug you’d like to draw?”

“Can I draw Bess Marvin?” Michael L. joked. Bess whirled around and glared at him.

“Michael L., that’s enough,” Mrs. Ramirez warned him. “Also, class? Don’t forget that tomorrow is our field trip to the River Heights Insectarium. Anyone who hasn’t given me their permission slips, I need them now.”

Sonia raised her hand. “Mrs. Ramirez? Can I make an announcement about something bug-related?”

Sonia stood up and brushed her long, wavy blond hair out of her face. “I wanted to tell everybody about the River Heights Elementary School Bug Club,” she began. “We’re accepting new members! We meet once a week, and we share stories about our pet bugs. We already have three members: Michael D., Michael L., and me. I’m the president.”

Nancy glanced over her shoulder at Michael L. He was bent over his notebook, doodling something that looked like a big, fire-breathing dragon. He wasn’t paying the slightest bit of attention to Sonia’s announcement. Nancy was surprised that he was a member of the Bug Club. He didn’t seem that interested in bugs. Yesterday, during the bug movie, he had gabbed with Antonio Elefano the whole time and gotten in big trouble with Mrs. Ramirez.

“We’re going to be starting a website about bugs soon,” Sonia went on. “And this Thursday, we’ll be bringing our pet bugs to school for Bug Show-and-Tell, and—”

But Sonia was interrupted by an angry voice. “Stop the Bug Club!” someone shouted. “It’s got to be shut down—now!”