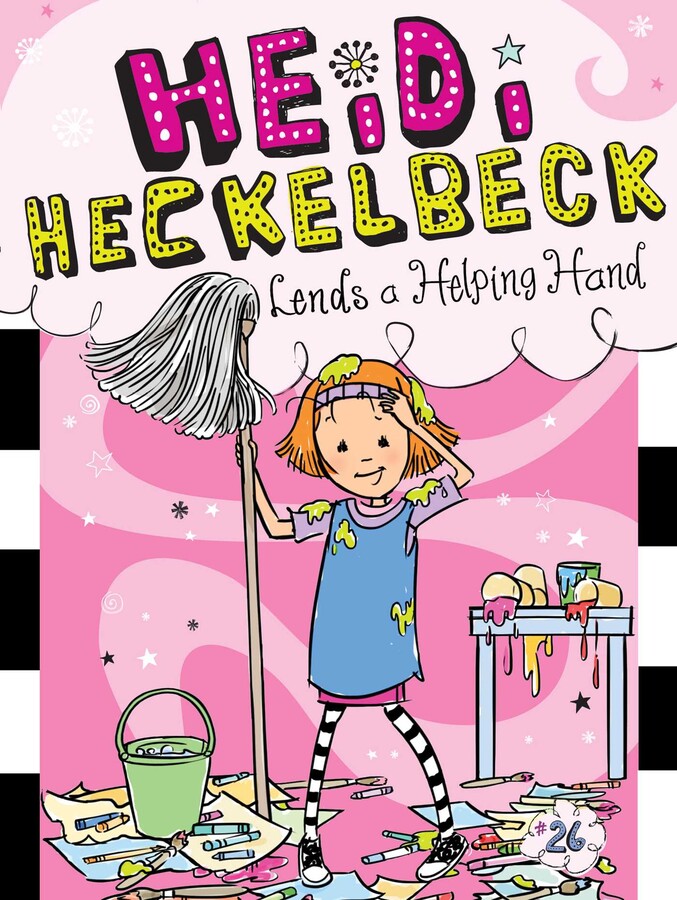 One day, when Heidi’s teacher, Mrs. Welli, teaches a lesson on the importance of helping and giving back to the community, she and her friends decide that it’s time to volunteer!

With easy-to-read language and illustrations on almost every page, the Heidi Heckelbeck chapter books are perfect for beginning readers.

Heidi Heckelbeck squeezed a glob of craft glue into a mixing bowl. Then she squirted some shaving cream on top.

Next she sprinkled some contact lens solution into the mix. Finally, she added the special liquid activator.

Heidi swirled the ingredients together like a magic potion—only this wasn’t actually a potion.

Today, in her art class, she was making a huge bowl of slime. Fluffy slime, to be exact.

She stirred until the slime pulled away from the bowl and became a big fluff-o-luscious blob. Then she pulled the slime with all ten fingers.

“It’s so squishable!” she said, squeezing it with her hands.

Lucy Lancaster, who was sitting next to Heidi, peeked into Heidi’s bowl.

“Oooh!” she exclaimed, stirring her own mix faster to catch up. “Your slime looks so marshmallowy!”

Heidi grabbed her slime and kneaded it like bread dough. The slime spoke a language all its own: Skloop! Sklorp! Skleep!

“Time to add some color!” Heidi announced. She plopped the slime back in the bowl and opened a package of neon-green powdered food coloring.

She dumped the whole package of dye into the bowl. Then she slapped the slime with her hand. POOF! The powder burst into a neon-green cloud and speckled Heidi’s face. The palm of her hand turned bright green too.

She squished and squashed the dye into the mix until it all blended.

“And now for some slime mix-ins!” Heidi grabbed a fistful of Styrofoam beads and then smooshed them into her slime to make slime-a-floam. Squish! Squash! Snap! Crackle!

Melanie Maplethorpe, who was sitting across from Heidi, poured a whole tube of pink-silver sparkles into her slime and mashed them in. Then she held up her hot-pink slime for everyone to see.

“MY slime is the pinkest slime in the WHOLE world!” Melanie declared. “And the sparkliest!”

By the end of the class, the art room was a gloopy, gloppy, capital M Mess. Puddles of glue and shaving cream dotted the tables. The chairs and the tabletops had splotches of green, pink, purple, and yellow dye. Glitter twinkled on top of everything like fairy dust.

“Cleanup time!” Mr. Doodlebee called. He handed out plastic containers to store the slime. But everybody kept right on squishing and squashing.

Mr. Doodlebee had to whistle through his fingers to get the students’ attention. “Please put your slime away and clean up your areas! It’s time for lunch.”

Now the children hopped to it. They stored their slime and washed their hands.

Mr. Doodlebee looked at his watch. The desks were still a mess and the bell was going to ring in three, two, one . . .

Mr. Doodlebee laughed and waved the kids out. “Saved by the bell. I’ll finish cleaning, class.”

The students filed out of the room. Heidi noticed Mr. Doodlebee cleaning up some of the Styrofoam beads she had spilled. She stopped for a moment. I really want to help him clean up, she thought.

Then Lucy called out, “Hurry up, Heidi! I’m hungry.”

Heidi turned to her friend, then looked back at her teacher.

Mr. Doodlebee DID say he’d finish the cleaning, she thought.

“Wait up, Lucy!” Heidi called as she grabbed her lunch box. “All that squishing made me hungry too!”

Wanda Coven has always loved magic. When she was little, she used to make secret potions from smooshed shells and acorns. Then she would pretend to transport herself and her friends to enchanted places. Now she visits other worlds through writing. Wanda lives with her husband and son in San Jose, California. They have three cats: Hilda, Agnes, and Claw-dia.

Priscilla Burris has illustrated numerous books for children, parents, and teachers. She enjoys cake painting and creating art for products that include murals, greeting cards, and rubber stamps. Priscilla lives with her family in Southern California.