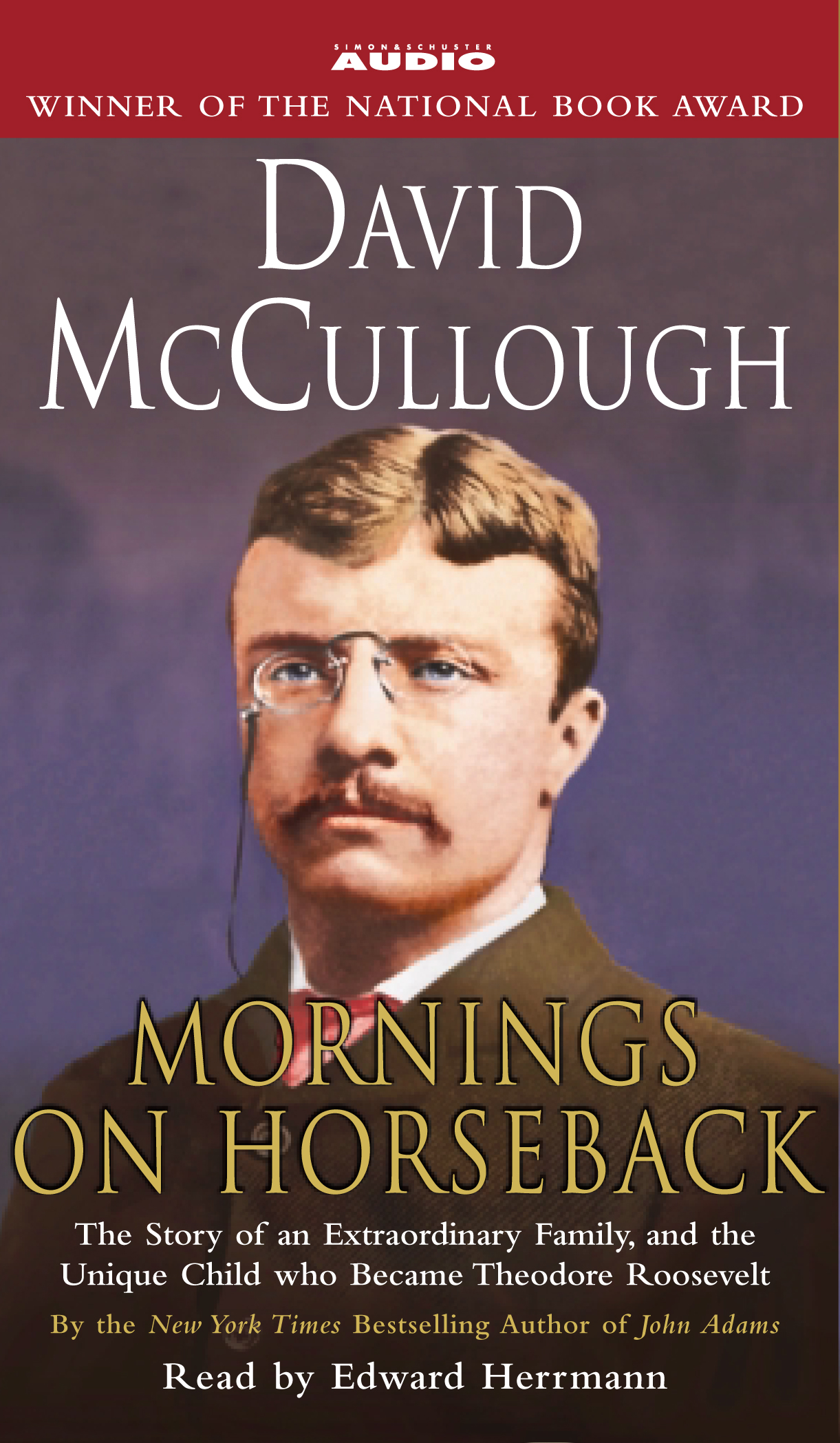 The Story of an Extraordinary Family, a Vanished Way of Life, and the Unique Child Who Became Theodore Roosevelt

The National Book Award–winning biography that tells the story of how young Teddy Roosevelt transformed himself from a sickly boy into the vigorous man who would become a war hero and ultimately president of the United States, told by master historian David McCullough.

Mornings on Horseback is the brilliant biography of the young Theodore Roosevelt. Hailed as “a masterpiece” (John A. Gable, Newsday), it is the winner of the Los Angeles Times 1981 Book Prize for Biography and the National Book Award for Biography. Written by David McCullough, the author of Truman, this is the story of a remarkable little boy, seriously handicapped by recurrent and almost fatal asthma attacks, and his struggle to manhood: an amazing metamorphosis seen in the context of the very uncommon household in which he was raised.

The father is the first Theodore Roosevelt, a figure of unbounded energy, enormously attractive and selfless, a god in the eyes of his small, frail namesake. The mother, Mittie Bulloch Roosevelt, is a Southerner and a celebrated beauty, but also considerably more, which the book makes clear as never before. There are sisters Anna and Corinne, brother Elliott (who becomes the father of Eleanor Roosevelt), and the lovely, tragic Alice Lee, TR’s first love. All are brought to life to make “a beautifully told story, filled with fresh detail” (The New York Times Book Review).

A book to be read on many levels, it is at once an enthralling story, a brilliant social history and a work of important scholarship which does away with several old myths and breaks entirely new ground. It is a book about life intensely lived, about family love and loyalty, about grief and courage, about “blessed” mornings on horseback beneath the wide blue skies of the Badlands.

Mornings on Horseback
Reader's Group Guide
1. In 1851, Theodore was sent on a Grand Tour. With a jealous sentiment, Robert critiqued Theodore's pattern of experiences saying, "it [traveling] is not to see scenery, or places," but rather to see and have conversations with men of other cultures to see their points of view. Do you agree with this statement? How do most Americans travel and why? What is your goal when you travel? What would you want your family to take from an experience over seas?
2. In exploring the effect of asthma over Teedie's life and the Roosevelt family, McCullough writes, "For a child as acutely sensitive and intelligent as he, the impact of asthma could not have been anything but profound, affecting personality, outlook self-regard, the whole course of his young life, in marked fashion...But he knows also that his particular abnormality lends a kind of power." What power is McCullough speaking of? How does Teedie's illness positively affect his life, interests, and ultimate passions and goals? Explain.
3. Teedie was encouraged by his father to build up his body as a way of overcoming his illness. His father says, "Theodore you have the mind, but you have not the body, and without the help of the body the mind cannot go as far as it should...you must make your body." Do you think this was the correct approach in dealing with Teedie's asthma? What approach would you use in dealing with an asthmatic child? Would you be overprotective, or would you encourage self-sufficiency? Explain.
4. During the Depression, business for the Roosevelts was stagnant and competition was high. As opposed to putting more effort into import trade, the Roosevelt brothers; Theodore and James Alfred became financers. When Alexander Graham Bell proposed his newly invented telephone, Theodore did not believe it had any real future outside of toys. Explain how Roosevelt could have arrived at this decision. In you r lifetime, can you think of new technologies that you wished you had invested in? Discuss.
5. In 1869, Charles W. Eliot was named president of Harvard University. He believed, "to be educated in science was to be educated in the future," and that "science was the firm foundation for man's faith in himself and in the present infinite creator." The Harvard administration's commitment to excellence in Science under Eliot aligned well with Teedie's interests. For a young man so well traveled, when did Teedie gain most from his Harvard education?
6. Theodore, Jr. courted Alice for quite a while before she reluctantly surrendered to his affection. Although, he had many girlfriends and admirers Alice was exceptionally beautiful to him. After marriage, their relationship was as loving and intense as his father and mother. Compare Theodore, Jr. and Alice's relationship with Theodore, Sr. and Mittie. Of Alice's characteristics which of those did Teedie fall most for? In Teedie's upbringing, what did he learn about what's most important in a wife?
7. On a tiger hunt south of Hyderabad in India, Teedie shoots and kills one of the largest tigers ever seen in that area. To his father Teedie writes, "it is the life, old man. Our kind. The glorious freedom, the greatest excitement... How everything here would have pleased your fondness for the unusual and the dangerous." What does Teedie imply by "our kind"? If you were a Roosevelt, how would you live? What would be the most important aspect of your lifestyle?
8. As a member of the State Assembly at the age of twenty-three, Theodore, Jr. proved to be an irreverent spirit in politics. After meeting Samuel Gompers and learning of the working conditions of cigar makers, Theodore supported the Cigar Makers Bill while simultaneously stepping on the toes of the notorious Jay Gould. What was Theodore's mistake in taking on Gould? How did he inadvertently fashion his political image? How was his polarized sense of right and wrong constructed by his upbringing? Was he wrong in his judgment of "the wealthy criminal class"?
9. Theodore often felt jaded about law as a profession, saying lawyers do not serve justice, they serve their clients; often equating a lawyers career with moneymaking and not with public service. If Theodore had similar sentiments about law, what did he say about politics, especially since he had a similar regard for the political profession? What was Theodore's ultimate goal in politics?
10. After the sudden deaths of Mittie and Alice, Theodore threw himself into his work as a way of compensating for his grief. In Alice's eulogy, he writes, "When my heart's dearest died, the light went out from my life for ever." Explain how he handled this sudden turn of events. How has his experience as an asthmatic prepared him for such fate?
11. Theodore's fascination with The Bad Lands and the romanticized West seemed the perfect antidote for his broken heart. What was it about the West that intrigued him and helped him to deal with life as a widow?

David McCullough has twice received the Pulitzer Prize, for Truman and John Adams, and twice received the National Book Award, for The Path Between the Seas and Mornings on Horseback. His other acclaimed books include The Johnstown Flood, The Great Bridge, Brave Companions, 1776, The Greater Journey, The American Spirit, and The Wright Brothers. He is the recipient of numerous honors and awards, including the Presidential Medal of Freedom, the nation’s highest civilian award. Visit DavidMcCullough.com.

Edward Herrmann's films include Nixon, The Purple Rose of Cairo, Annie, and The Aviator. On television's Gilmore Girls he starred as the patriarch, Richard Gilmore. He has also appeared on The Good Wife, Law & Order, 30 Rock, Grey's Anatomy, and Oz. He earned an Emmy Award for The Practice, and remains well-known for his Emmy-nominated portrayals of FDR in Eleanor and Franklin and Eleanor and Franklin: The White House Years. On Broadway, he won a Tony Award for his performance in Mrs. Warren's Profession.

The Story of an Extraordinary Family, a Vanished Way of Life, and the Unique Child Who Became Theodore Roosevelt

SEE ALL
See more by Edward Herrmann
Thank you for signing up, fellow book lover!