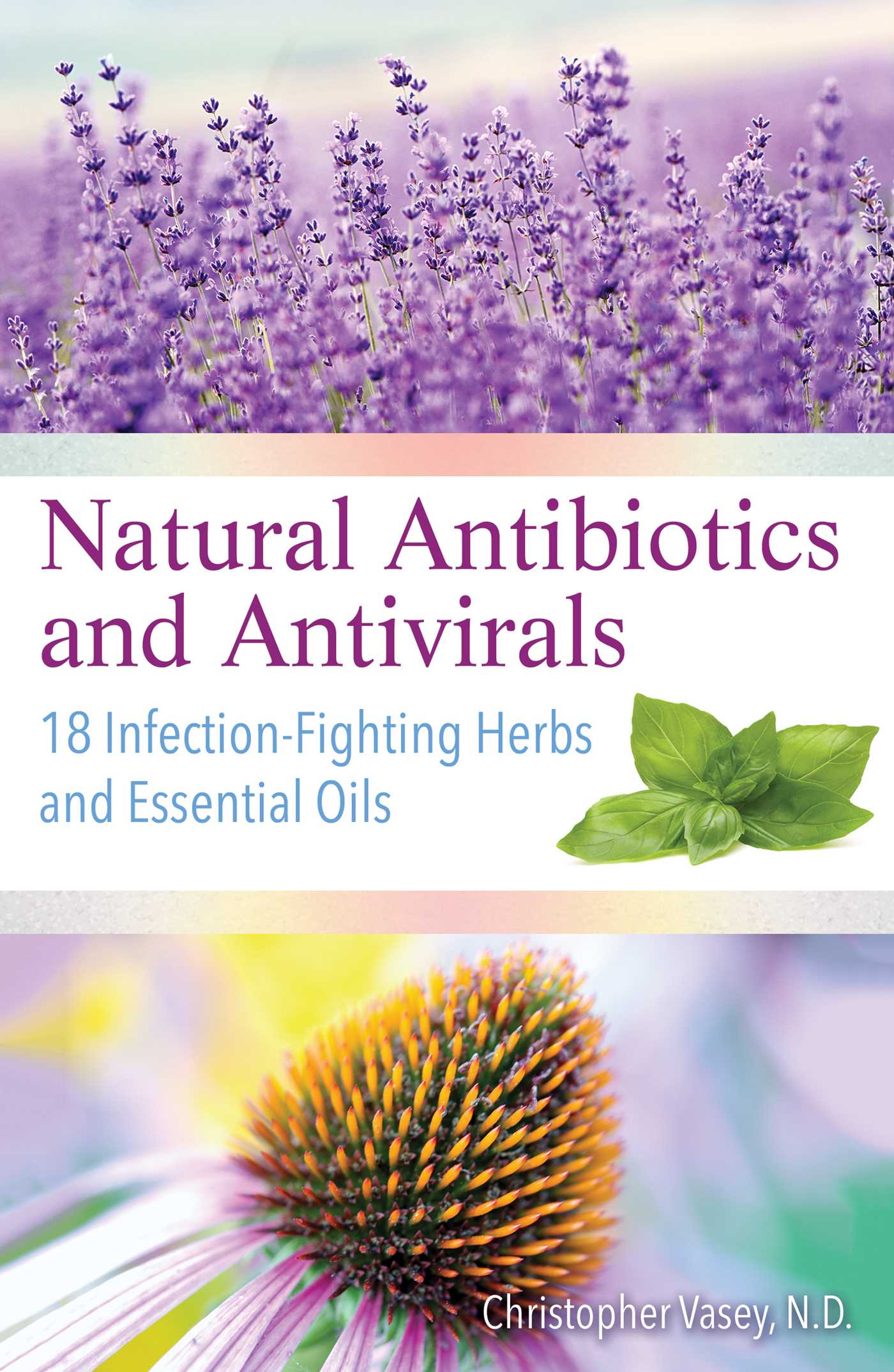 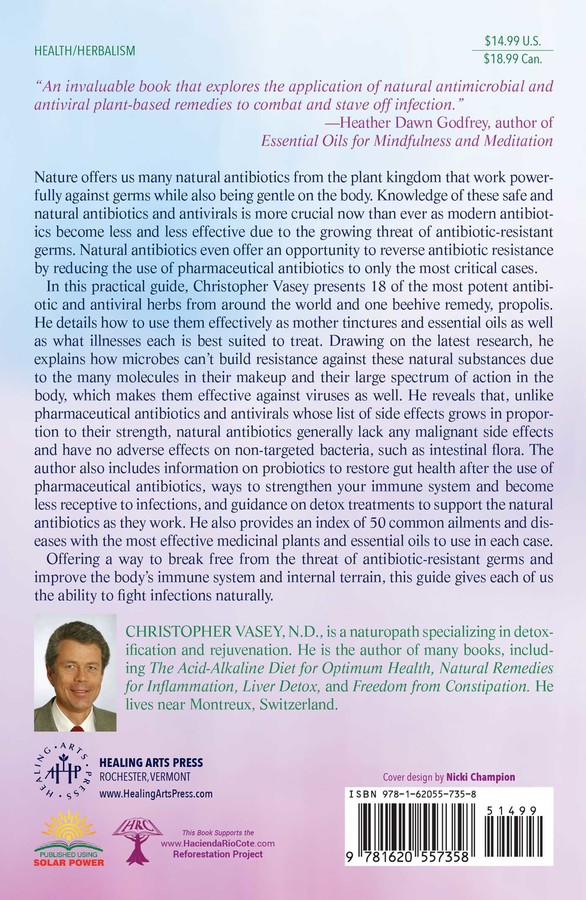 Explains how to use medicinal herbs and essential oils to fight infectious illness, strengthen the immune system, and combat antibiotic resistance

• Presents 18 of the most potent antibiotic and antiviral herbs and one beehive remedy, propolis, detailing how to use them and what illnesses each is best suited to treat

• Reveals how natural antibiotics have antiviral properties, lack side effects, and have no adverse effects on non-targeted bacteria, such as intestinal flora

Nature offers us many natural antibiotics from the plant kingdom that work powerfully against germs while also being gentle on the body. Knowledge of these safe and natural antibiotics and antivirals is more crucial now than ever as modern antibiotics become less and less effective due to the growing threat of antibiotic-resistant germs. Natural antibiotics even offer an opportunity to reverse antibiotic resistance by reducing the use of pharmaceutical antibiotics to only the most critical cases.

In this practical guide, Christopher Vasey presents 18 of the most potent antibiotic and antiviral herbs from around the world and one beehive remedy, propolis. He details how to use them effectively as mother tinctures and essential oils as well as what illnesses each is best suited to treat. Drawing on the latest research, he explains how microbes can’t build resistance against these natural substances due to the many molecules in their make-up and their large spectrum of action in the body, which makes them effective against viruses as well. He reveals that, unlike pharmaceutical antibiotics and antivirals whose list of side effects grows in proportion to their strength, natural antibiotics generally lack any malignant side effects and have no adverse effects on non-targeted bacteria, such as intestinal flora. The author also includes information on probiotics to restore gut health after the use of pharmaceutical antibiotics, ways to strengthen your immune system and become less receptive to infections, and guidance on detox treatments to support the natural antibiotics as they work. He also provides an index of more than 50 common ailments and diseases with the most effective medicinal plants and essential oils to use in each case.

Offering a way to break free from the threat of antibiotic-resistant germs and improve the body’s immune system and internal terrain, this guide gives each of us the ability to fight infections naturally.

Several hundred plants possess antibiotic properties--from the most common plants of our local surroundings to rare, exotic species. People have been benefiting from the healing properties of these natural antibiotics for thousands of years.

This medicinal plant is better known by its Latin name Echinacea. The purple coneflower is a plant that grows wild in the great prairies of North America but is increasingly cultivated in gardens there and in Europe. The stem, which is around 20 inches tall, is crowned by beautiful flowers that bear a passing resemblance to large daisies with mauve-red petals. There are many varieties of echinacea, but only two are used for their medicinal properties: Echinacea purpurea and Echinacea augustiflora.

Archaeological digs have revealed that Native Americans were using echinacea at least from the beginning of the seventeenth century to treat infections of all kinds: throat, teeth, wounds, snakebite as well as for measles, mumps, and chickenpox. To benefit from its healing virtues, they sucked on the roots of this plant or made them into poultices. The use of echinacea spread to the rest of the world thanks to the many studies that revealed its benefits.

The effectiveness of echinacea is due to its combination of antibiotic and immunestimulating properties. Its enzymes destroy the enzymes that are released by bacteria that weaken the cellular membranes of the host cells. The bacteria are then destroyed by the macrophages, whose production and activity are strongly increased by the immune-stimulating properties of echinacea.

The action of macrophages--which consists of swallowing and then destroying invaders--is a non-specific defense system. It works against bacteria as well as viruses, fungi, and parasites. Echinacea therefore has an extremely broad spectrum of action, which makes it useful against all infections wherever they may be located. Because of its gentle nature, echinacea is recommended for everyone, including children and the elderly.

The mother tincture of echinacea is a simple and effective means of using this medicinal plant. Small does, ingested several times a day (five to six times, for example) have been shown to be more effective than higher doses taken one time. In treatments needed for long durations (for chronic infection or flu prevention), its immune-stimulating action is better if it is used in treatment protocols that have pauses between them. For example, two weeks with echinacea, one week without.

• Internally: 20-30 drops mother tincture in a little water, three to five times daily. For acute disorders, 20 drops every two hours during the first two days, then greater intervals between doses should be introduced.

• Externally: 30-50 drops in a glass of lukewarm water for gargling during infections of the throat, teeth, or mouth (canker sores). The same dosage can be applied to compresses for treatment of wounds, bites, boils, and abscesses.

Native to Australia, the medicinal properties of the leaves and branch tips of this tree have been known for millennia by the Aborigines. Tea tree is still an important part of this country’s therapeutic arsenal. During the Second World War, for example, the Australian army distributed flasks of this tree’s essential oil so that people could treat their own skin infections (scratches, wounds, cuts, stings, boils, and fungal infections).

The active properties of tea tree are various kinds of terpenes that are found in its essential oil, a broad-spectrum antibacterial. It is also effective against viruses, parasites, and fungi. It stimulates the immune system, including the production of antibodies IgA (which prevent germs from penetrating deeper into the body). It also acts on the respiratory system and the genital region.

Tea tree oil is one of the major anti-infection agents.

• Internally: 2-4 drops in honey or a dispersant, three to five times daily

• Externally (strongly recommended): 1 undiluted drop on canker sores or pimples, or 10 drops in 1 teaspoon of sweet almond oil, as an ointment on the region to be treated (for example, the lower belly in the case of infectious enteritis).

Oregano is perhaps the best-known cooking herb. In the wild it grows in rocky areas that do not receive much sunlight. Its purplish-pink flowers bloom at the tip of a tree-like stalk that grows from 1-2 feet high.

Known to the Egyptians, Greeks, and Romans for its tonic, antispasmodic, gastric, and cough-suppressing properties, the essential oil of oregano is most often used today for its especially powerful antibiotic virtues. Various experiments have shown that this essential oil (along with that of thyme) is the most effective for disinfecting a solution teeming with germs. In one instance, a quart of meat broth mixed with sewer water was sterilized by the addition of oregano essential oil, at a dilution of merely 1 percent.

Of all the different varieties of oregano, the Greek version (Origanum heracleoticum) has been shown to have the most active principles.

The primary components of oregano essential oil are carvacrol (50-75%) and paracymene (7-10%). These antibiotic substances have been revealed to be quite effective not only against bacteria but also against viruses, fungi, and parasites. They also possess a very broadspectrum effect inside these four groups. Oregano essential oil is therefore a polyvalent natural antibiotic with multiple indications, all the more so as it boosts the immune system.

• Internally: 2-4 drops in 1 teaspoon of honey or dispersant, three to five times daily

• Externally: 1-3 drops diluted in 1 teaspoon of sweet almond oil. Note: this essential oil has quite an aggressive effect on the skin; it must be diluted.
Christopher Vasey

“An informative and invaluable book that explores the application of natural antimicrobial and antiviral plant-based remedies to combat and stave off infection, Natural Antibiotics and Antivirals provides a significant source of reference for the layperson and health care professional alike.”

“Christopher Vasey’s fascinating book explores in detail the powerful world of natural antibiotics (essential oils and herbs) and the role they play in addressing the countless pathological germs we encounter every day. His book is well organized, allowing you to easily reference treatments for common infections, and provides detailed information on creating a symbiotic relationship with our intestinal flora, ultimately leading to radiant health.”

"As the number of people embracing alternate healing modalities has increased, so has the popularity of books on essential oils, tinctures, and herbal remedies in general. I’ve read a lot of them and, while most of them are very good, this book has a particular clarity about it that makes it a stand out. Vasey includes quite a bit of scientific information in making his case for the effectiveness of herbal remedies."

Most of this book discusses principles and theories concerning infectious germs, the body’s defense mechanisms, and advantages of probiotics. The quarter of it that is devoted to essential oils offers good formulas to treat 50 infections with 18 oils, although ingesting 3-5 drops essential oil 3-4 times a day is far more than an aromatherapist would recommend. Grapefruit seed is repeatedly recommended, even though its antimicrobial properties are solely due to a synthetic antibiotic, as reported in the AHA Quarterly and an American Botanical Council 2012 paper. Vasey is a naturopath whose books include The Acid-Alkaline Diet for Optimum Health.