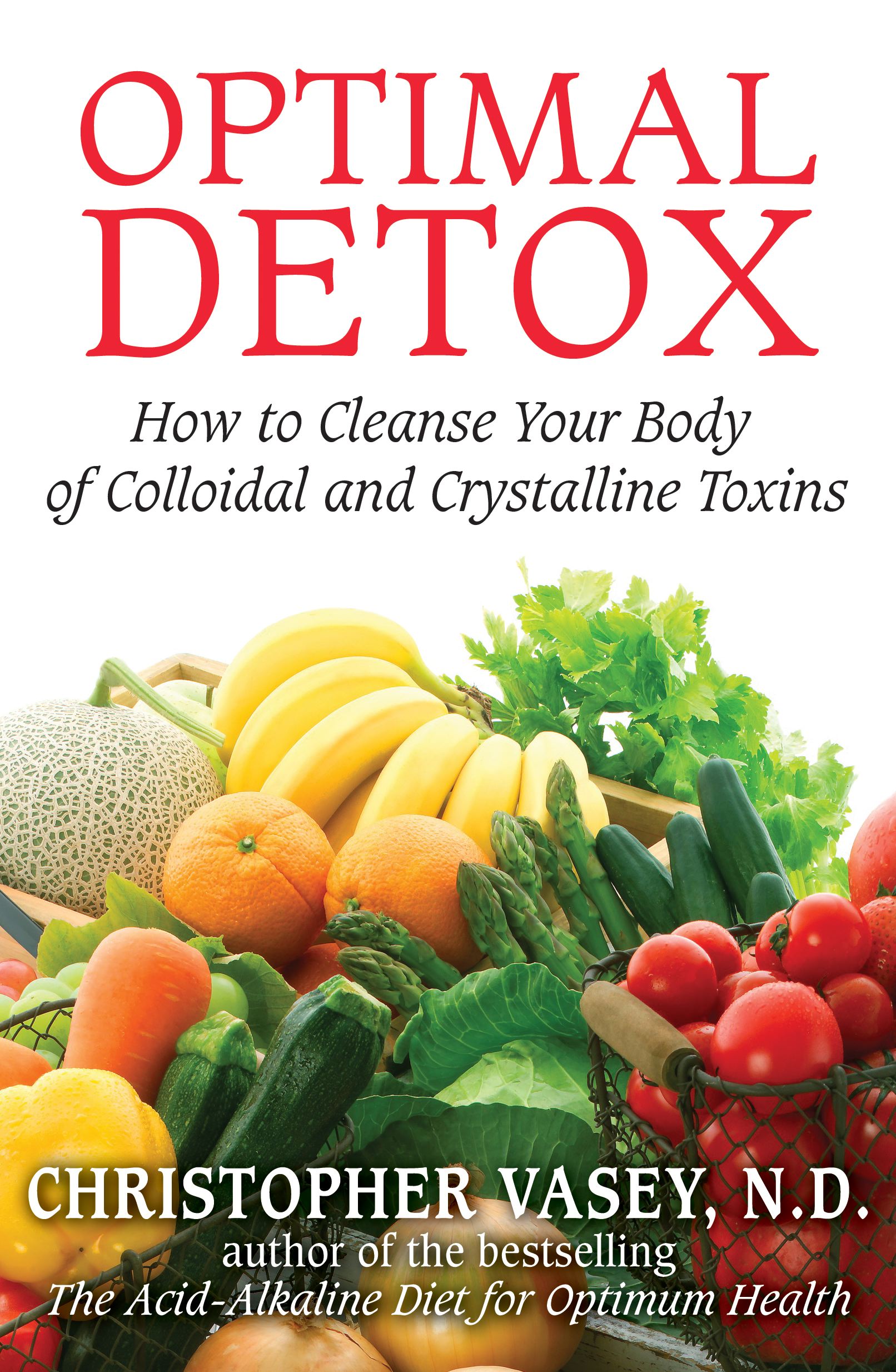 How to Cleanse Your Body of Colloidal and Crystalline Toxins

• Reveals the two main types of toxins: colloidal, which affect circulation and organ function, and crystalline, which cause tissue damage and pain

• Explains the toxins behind specific illnesses and which of the 5 excretory organs--liver, intestines, kidneys, lungs, or skin--should be stimulated for optimal detox

• Details how specific foods can produce these toxins and trigger illnesses

The lasting benefits of detoxification and internal cleanses are becoming well-known and accepted--in part, because these practices are more vital than ever for optimal health and longevity and in the fight against environmental and dietary toxins.

Christopher Vasey shows how accumulation of toxins is the primary cause of illness and how the key to successful detoxification is identifying the type of toxin--either colloidal or crystalline--polluting your biological terrain. He explains how colloidal toxins hinder circulation and organ function, while crystals move around the body damaging tissues and causing lesions and pain. Left unchecked, the two forms can combine to create “stones”--such as gallstones or kidney stones. Beyond finding the cause of an illness, the most important reason to correctly diagnose your type of toxin is to ensure you choose the most effective method of detoxification and stimulate the appropriate excretory organ--liver, intestines, kidneys, lungs, or skin. For example, a person seeking to purge his system of crystals should increase his fluid intake to stimulate the kidneys not encourage bile production, because crystals cannot be expelled via the liver.

With clear, practical instructions and guidance, Vasey explains how to identify which type of toxin is triggering your illness and which medicinal herbs, hydrotherapy techniques, or nutritional options are the best choice for each specific condition or combination of ailments. He reveals which foods produce colloidal and crystalline toxins and should therefore be avoided. This targeted method of detoxification enables each of us to cleanse our bodies of accumulated toxins safely, accurately, and successfully.

Chapter 4
The Different Illnesses Caused by Colloidal and Crystalline Toxins

Simply knowing that diseases are primarily due to the accumulation of toxins in the body is a good thing on its own. However, it is even better to know how to tell the difference between those diseases that are caused by colloidal wastes and those created by crystalline wastes.

So what do we need to learn in order to best apply this knowledge?

The first step consists of observing what excretory organ is most affected by the disease. As we have just seen, colloidal wastes and crystals do not use the same organs for exiting the body. Overloads of one kind of waste will target very specific excretory organs. The other eliminatory organs will be spared completely as they do not handle the waste products in question. For example, an excess of colloidal wastes can overwork and make several of the excretory organs that handle these toxins sick: the liver, intestines, lungs, and sebaceous glands. But the effects of this overload will have no bearing whatsoever on the organs that eliminate crystalline wastes from the body: the kidneys and sudoriferous (sweat) glands. This is why, when the liver, intestines, respiratory tract, or sebaceous glands are afflicted, we are seeing evidence of a colloidal disease (as these organs specialize in the elimination of colloidal wastes). When the liver or sudoriferous glands are suffering from illness, we are seeing signs of diseases caused by crystalline wastes (as these are the organs that are intended to eliminate crystals from the body).

The second way to tell what kind of illness is present--colloidal or crystalline--consists of observing two symptoms: discharge and pain.

Some diseases are characterized by a visible discharge of substances from the body while others exhibit no such discharges. Generally speaking, the former are illnesses caused by colloidal wastes; the latter are illnesses engendered by crystals.

Colloidal wastes contain a certain quantity of water, which gives them a semi-fluidic consistency. As a consequence, these wastes can overflow and be discharged. Colloidal wastes are discharged from the body by the respiratory tract (in the form of colds, bronchitis, and so on), by the sebaceous glands (whiteheads, oozing eczema, varicose ulcers), and the intestines (in the form of stools).

Crystals are basically hard, dry wastes. Their water content is practically nil. Consequently they do not flow and leave the body in the form of discharge; they remain stationary, motionless. When there is an excess amount of crystalline waste in the body, they form deposits in the tissues. For example, these deposits can appear in the joints (arthritis), in the skin (eczema), on the walls of the blood vessels (arterioscleroisis), or in the kidneys (kidney stones).

When an excess of crystal toxins exists, they will compress the tissues, rub against them too energetically, or outright injure them. Crystals are hard and have an angular structure with sharp edges. When they remain stagnant in the body they easily injure the cells by scratching, pricking, cutting, and piercing them. At the onset, they will be perceived only as an irritant. Over time, lesions will occur. The inflammation of the tissues makes them extremely sensitive and all the more receptive to pain.

Conversely, colloidal wastes do not possess any of these effects whatsoever and do not cause pain. Their lack of structure, which is to say rigidity, sharply reduces any possibility of tissue injury. Being soft and malleable, they do not change the shape of the tissues with which they come into contact, and do not tear or injure them like crystals. To the contrary, they change shape to adapt to that of their environment. It is difficult for them to maintain any kind of sustained pressure as they themselves are easily scattered and dispersed under pressure. Their constituent elements, moreover, are not aggressive or irritating.

Note: We should point out that there are shades of gray when citing the lack of any pain as a defining characteristic of colloidal diseases. A kind of painful sensation will be displayed in some diseases, such as bronchitis, for example. This pain is not as sharp, and most importantly not as continuous, as in the case of crystal diseases. The pains associated with these colloidal diseases are due more to the inflammation caused by germs rather than an overload of toxins.

Now that we have established the general criteria that make it possible to tell the difference between the diseases caused by crystals and those caused by colloidal wastes, we can describe the different diseases to show how they are actually colloidal or crystalline. The question of mixed illnesses will also be discussed. In fact, the clogging of the terrain can sometimes be dual--involving both colloidal and crystalline wastes--which is the cause of illnesses that share characteristics from both kinds of diseases.

Colds
The Greek word rheuma, from which the French word for colds, rhume is derived (as well as the English term rheumatic) means “flow.” Another once common word for colds is catarrh, a word that also means “flow” or “discharge.” The part of the body involved here is the upper end of the respiratory tract: the nasal cavities and the tubes leading into them. At the onset of a cold, the discharge is clear. Then, over a period of one or two days, it thickens and turns yellowish. These secretions are partially composed of the protective mucus produced by the mucous membranes and dead germs but also include colloidal wastes.

When the mucous content is predominant, the flow is more fluid, whereas when colloidal substances are in the majority, it is thicker. The quantity of wastes eliminated can be quite large, as shown by the number of tissues used during some colds!

“Christopher Vasey has once again written an important book that advances our understanding of health and gives readers a clear approach to detoxification that far surpasses the majority of books in this realm. He offers the layperson masterful insights that are based on real-world clinical experience, traditional wisdom, and straightforward science. Dr. Vasey is a brilliant spokesperson for the naturopathic approach. This is a concise, readable, and practical book that puts the power to heal into your own hands. Highly recommended.”

– Marc David, nutritional psychologist, founder of the Institute for the Psychology of Eating, and aut

“Christopher Vasey, N.D., perfectly explains the major importance of a well-balanced biological terrain as well as the need to control the effects of external pollutants (free radicals, heavy metals, chemical additives in foods, chemical molecules in medicines, etc.) and internal pollutants: colloidal and crystalline wastes. These modern toxins do not have biologically programmed “exit routes.” Our body, infinitely adaptable for millennia, has not had the necessary time to adapt to these toxic wastes. Optimal Detox offers the tools to live a healthier and more youthful life. I highly recommend this book.”

– Yann Rougier, M.D., author of Delta Medicine and founding member of the Institute for Applied Neuron

“Optimal Detox is well laid-out and comprehensive. Although it is filled necessarily with Latin and medical terminology, it clearly breaks down illnesses, the causes, and the clearing. It’s an excellent everyday reference guide for anyone wanting to address illness through naturopathy and non-surgical/non-pharmaceutical ways, restoring and maintaining solid health through a plant-based diet and thorough elimination and avoidance of foods and behaviors that promote the toxins that lead to illness.”

“There is so much to know about cleansing your body of toxins and somehow Christopher Vasey makes it simple to understand. This is a good follow-up to his earlier book, The Acid-Alkaline Diet for Optimum Health, and both are excellent resource books for professionals and everyday people who simply want to live a healthier life and detoxify from all the toxins in our environment and processed foods.”

“This book has a lot of information and is for anyone who wants to improve their health and understand what is causing their symptoms. It is comprehensive, yet at the same time concise so it is not overwhelming. The author shares brilliant strategies and life-changing methods.”

“Dr. Vasey advises on choosing the correct drainage therapy for the right organ, based on combinations of water intake and hydrotherapy, medicinal herbal treatments and appropriate nutritional intake with dietary corrections. His book offers a way to restore good health according to the laws of nature.”

How to Cleanse Your Body of Colloidal and Crystalline Toxins