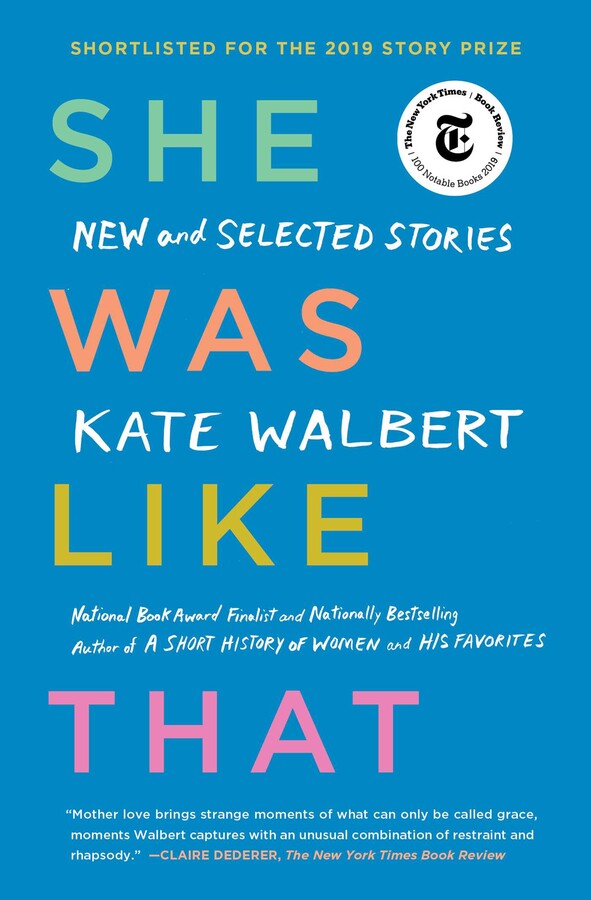 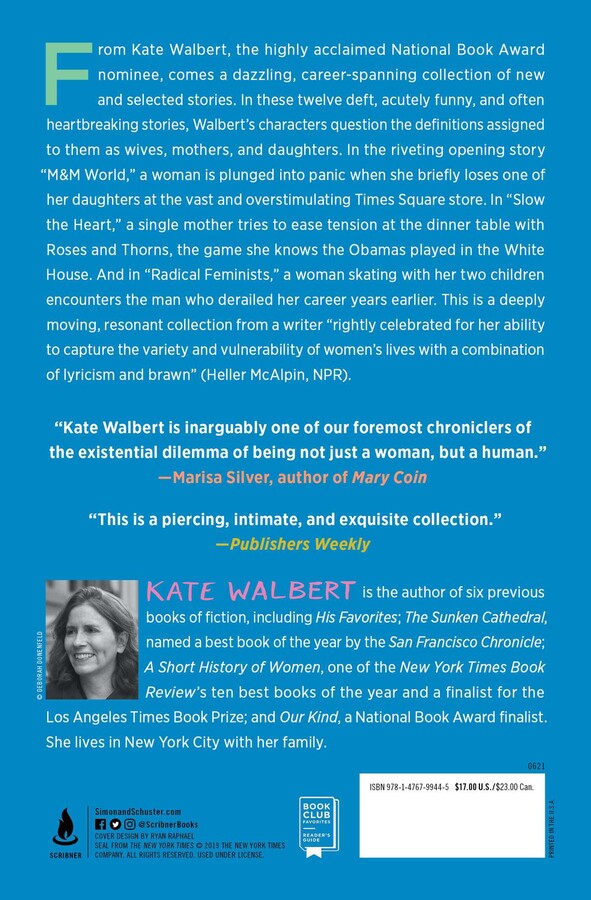 She Was Like That
By Kate Walbert
Read by Samantha Desz, Cynthia Farrell, Devon Sorvari and Cassandra Campbell

A New York Times Notable Book of 2019 selection, a New York Times Editors’ Choice book, and longlisted for the Story Prize—from the bestselling, highly acclaimed National Book Award nominee, She Was Like That is a “piercing, intimate, and exquisite” (Publishers Weekly) collection of new and selected stories that capture “the joys and anxieties of motherhood” (Star Tribune, Minneapolis).

In these twelve deft, acutely funny, and often heartbreaking stories, “Walbert captures with an unusual combination of restraint and rhapsody” (The New York Times) the questions women ask themselves and the definitions assigned to them as wives, mothers, and daughters. Her characters are searchers, uneasy in one way or another. They yearn for connection.

In the riveting opening story “M&M World,” a woman is plunged into panic when she briefly loses one of her daughters at the vast and over-stimulating Times Square store. In “Slow the Heart,” a single mother tries to ease tension at the dinner table with Roses and Thorns, the game she knows the Obamas played in the White House. In “Radical Feminists,” a woman skating with her two children encounters the man who derailed her career years earlier. And in the poignant, “A Mother Is Someone Who Tells Jokes,” a mother reflects on the nursery school project that preceded her son’s autism diagnosis. This is a deeply moving, resonant collection from a writer “rightly celebrated for her ability to capture the variety and vulnerability of women’s lives with a combination of lyricism and brawn” (NPR).

By clicking 'Sign me up' I acknowledge that I have read and agree to the privacy policy and terms of use. Free ebook offer available to NEW CA subscribers only. Offer redeemable at Simon & Schuster's ebook fulfillment partner. Must redeem within 90 days. See full terms and conditions and this month's choices.
This reading group guide for She Was Like That includes an introduction, discussion questions, and ideas for enhancing your book club. The suggested questions are intended to help your reading group find new and interesting angles and topics for your discussion. We hope that these ideas will enrich your conversation and increase your enjoyment of the book.

In these deft, gorgeously wrought stories, Kate Walbert explores the hearts and minds of women, the joys and anxieties of mothering in the modern age, and the drive for human connection in an increasingly disconnected world. Walbert is as skilled as ever at capturing female interiority. In the brilliant opening story “M&M World,” a woman is plunged into panic when she briefly loses one of her daughters at the Times Square store. In “Slow the Heart,” a single mother wanting to enliven the dinner table conversation suggests to her family that they play Roses and Thorns, the game the Obamas played during meals in the White House. And in the story, “A Mother is Someone Who Tells Jokes,” a woman reflects on the nursery school project that preceded her son’s autism diagnosis. She Was Like That is a deeply resonant, career-spanning collection from a writer “rightly celebrated for her ability to capture the variety and vulnerability of women’s lives with a combination of lyricism and brawn” (NPR).

1. From a mother losing her daughter in the consumerist chaos of a Times Square store in “M&M World” to a father checking his phone during a group meeting of parents and children in a rehabilitation facility in “Slow the Heart,” many of Walbert’s characters are distracted and overstimulated. What role does technology play in these stories? What do you think Walbert is trying to convey about the modern condition?

2. The past figures significantly in Walbert’s stories. In many of them, flashbacks infuse the present scenes with greater depth and significance. Why do you think she chooses to do this? Is there a flashback that had particular resonance for you?

3. Men are frequently absent from these stories. In “M&M World,” the narrator's ex-husband is never named, simply called “the girls’ father.” How are men portrayed in these stories, as fathers or as husbands?

4. Many of these stories, from “M&M World” to “Radical Feminists” to “A Mother is Someone Who Tells Jokes,” take place in New York City. In what ways does post-9/11 New York inform the sensibility of these stories? How does the environment, and the city in particular, affect the characters’ psyches and lives?

5. Several of these stories feature women telling stories, including “To Do,” “She Was Like That,” and “Conversation,” among others. Discuss the theme of storytelling in this collection. What is the significance of the characters’ attempting, and often failing, to be heard?

6. Walbert’s characters frequently mention canonical women writers, from Edith Wharton in “A Mother is Someone Who Tells Jokes” to Virginia Woolf in “She Was Like That.” How do these women interact with these texts? How do you think these writers have influenced Walbert’s writing?

7. In “Do Something” the narrator, Margaret, announces that she is “trying to Do Something . . . trying to be real when everything is an approximation” (page 204). In what ways do we see Margaret, and Walbert’s other characters, attempt to do something throughout this collection? How is the drive to do more or connect more reflected in other stories in the collection?

9. “Radical Feminists” features a man, Jonathan Fontaine, who years earlier derailed the career of the protagonist, Beatrice Wells, by asking if she planned to get pregnant while on the job. The two bump into each other in a busy park, and Beatrice proceeds to imagine all the ways in which she might have confronted him at the time—though she did not—while simultaneously doing him a favor. What does this story say about what women were up against in the workforce at the time? And now? What does it say about the shadow of sexism over a woman’s life?

1. Read A Short History of Women, Kate Walbert’s much-acclaimed novel, which features some of these stories, and offers a moving portrait of the complicated legacies of mothers and daughters.

2. Bring in a favorite passage from one of the many women writers who have reflected on female interiority over the past century, from Virginia Woolf to Jenny Offill, that you think complements these stories. Discuss how it resonates with your own story. 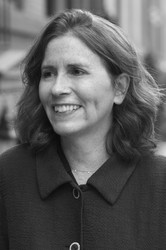 Kate Walbert is the author of seven works of fiction: She Was Like That, longlisted for the Story Prize and a New York Times Notable Book of the Year; His Favorites, an Atlantic Monthly Best Book of the Year; The Sunken Cathedral; A Short History of Women, a New York Times Book Review 10 Best Books of the Year and finalist for the Los Angeles Times Book Prize; Our Kind, a National Book Award finalist; The Gardens of Kyoto; and the story collection Where She Went. Her work has appeared in many publications, including The New Yorker, The Paris Review, The Best American Short Stories, and The O. Henry Prize stories. She lives with her family in New York City.

"A fascinatingly integrated story collection...Mother love brings strange moments of what can only be called grace, moments Walbert captures with an unusual combination of restraint and rhapsody." —Claire Dederer, The New York Times Book Review

“In this evocative collection, the love of women for their children can provide salvation or a trap. Or both, at the same time. Walbert captures maternal love and its moments of grace with an unusual combination of restraint and rhapsody.”—The New York Times, Editors’ Choice

"A striking, often melancholy collection [that] grapples with the joys and anxieties of motherhood."—Minneapolis Star Tribune

"An intense look at women searching — often fruitlessly — for companionship, while striving to hold on to their dreams."—Cory Oldweiler, AM New York

“This is a piercing, intimate, and exquisite collection.”—Publishers Weekly

"Tales of spare, unflinching beauty show how love and loneliness can occupy a heart together.” —Kirkus Reviews

“I loved these stories, wide-open, varied, generous, warm, funny.”—Tessa Hadley, author of Late in the Day

“Kate Walbert is inarguably one of our foremost chroniclers of the existential dilemma of being not just a woman, but a human. With astonishing precision, alive and alert to the complications embedded in even the simplest exchange, Walbert slips into the fissures and fault lines of her utterly compelling characters doing the best of what a writer can do: she makes the familiar strange, and in doing so, reveals the glorious complexity of a world we only think we know.”—Marisa Silver, author of Mary Coin