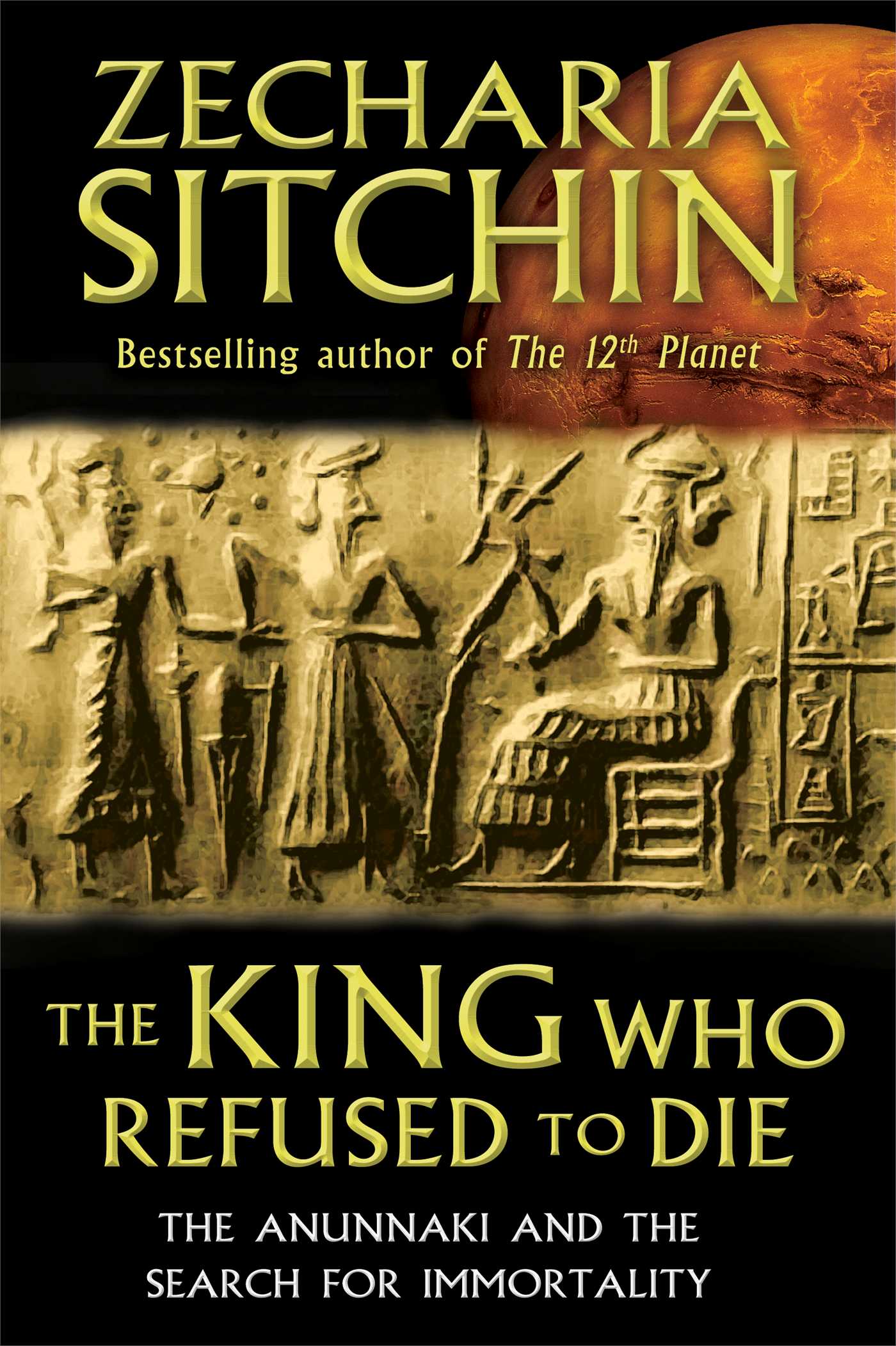 The King Who Refused to Die

The Anunnaki and the Search for Immortality

• Details ancient Sumerian sex rituals, the Anunnaki lineage of the gods who lived in Sumer, Anunnaki spacecraft technology, the workings of the Oracle of Anu, and Gilgamesh’s relationship with the goddess Ishtar

Written in secret so as not to incite criticism about his controversial discoveries, this novel from the late Zecharia Sitchin brings to life the key themes of his bestseller The 12th Planet. The story begins in London as Astra arrives at the British Museum’s opening for their new Gilgamesh exhibit. There she meets a handsome stranger who knows secrets about her that no stranger should know, including the source of the unusual scar on her hand. Taking her to his apartment, he reveals that she is descended from the goddess Ishtar and that he is the modern-day avatar of Gilgamesh seeking to claim the eternal life Ishtar denied him so long ago. Reenacting their sacred sex ritual from eons ago, they find themselves transported to ancient Sumer as Gilgamesh and Ishtar, where he is at last able to continue his quest for immortality.

But as Gilgamesh fulfills his sacred duties with Ishtar, something goes awry and the Oracle of Anu will not renew its blessing upon his kingship. Following the direction of his mother, the Anunnaki goddess Ninsun--the source of his partial divinity--Gilgamesh flees the city for the Anunnaki forbidden zone in search of a way to the planet Nibiru and eternal life. Travel alongside Gilgamesh and his immortal companion Enkidu as they escape the fate pronounced by the oracle, discover a Tablet of Destiny meant for Ishtar, fight off Marduk’s raiders, and foil the plot of the high priest, Gilgamesh’s half-brother who is seeking Gilgamesh’s crown for himself.

Retelling the Epic of Gilgamesh in the context of his discoveries about the Anunnaki, Zecharia Sitchin weaves a tale of ancient ceremony, accidental betrayal, gods among men, interplanetary travel, and a quest for immortality spanning millennia.

Gilgamesh awoke with a start. He looked about him and recalled where he was. “I’ve fallen asleep, I was so tired. Why did you awaken me no sooner than I had closed my eyes?”

“By yourself you have awakened, and you have slept seven days and seven nights!” Ziusudra said.

“Forgive me then for my hasty words,” Gilgamesh replied, embarrassed. “It is as though but a moment has passed since you began your tale. . . . A secret of the gods you were about to tell me?”

Ziusudra waited until Gilgamesh had his meal, then began to speak slowly.

“At that time, the land extended and mankind multiplied. The Anunnaki, those who to Earth from the Heavens came, were mostly male and, after a while, took a liking to the daughters of man. Even the great ones, like Utu, had children by Earthling women. Enki, the creator of mankind, was pleased that the gods and his creatures could intermingle and have offspring. Sud was pleased, and in her city, Shuruppak, a demigod was anointed as a king.

“But the great Enlil was angry. The distractions were keeping the Anunnaki away from their mission, he complained. They of Nibiru should not become involved in the affairs of the Earthlings, he insisted. It was all not to his liking!”

Ziusudra paused to take a sip of water. “Then when the time of Nibiru’s crossing was approaching, Enlil called a council of the gods. ‘The passage of Nibiru in Earth vicinity,’ he reported, ‘could cause a tidal wave to sweep over the Earth. The lord Anu has ordered that all the Anunnaki leave the face of the Earth in their spacecraft.’ ‘And what about mankind?’ Enki asked. ‘Let mankind perish!’ Enlil answered, and he made all of them swear to keep the nearing calamity a secret from mankind.”

“The end of all flesh on Earth!” Gilgamesh exclaimed.

“That was Enlil’s wish. But the lord Enki, though bound by an oath, called me to his temple. ‘A killing flood is coming,’ he said, ‘wiping all off the face of the Earth. The Anunnaki will escape in their skyships. Enlil made us swear to secrecy, so that mankind should perish. But I and Sud have chosen you to preserve the seed of mankind, the seed of all that lives on Earth. . . . Build a boat,’ he told me. He gave me its dimensions and implored me to hurry, and when the construction was finished, to watch for a signal. ‘When Utu shall order a trembling at dusk, you will see a rain of eruptions,’ he said. ‘Then are you to board the ship with all of your offspring, all of your family and kin, all the beasts of the field, and all manner of other creatures, that you may together survive the coming Deluge.’”

“On the stated day, a memorable day, with the first glow of dawn, a black cloud arose in the southern skies,” Ziusudra continued. “A storm began to thunder, moving over hills and plains. At their stations the Anunnaki took to their skyships, setting the land ablaze with their glare. We hurried into the boat, and battened the hatches. Cowering like dogs, we crouched against the boat’s walls. For six days and six nights the storm swept over the land. Then the sea grew quiet; the tempest was still. The boat rose to float upon the water. I opened a hatch and looked out. All was covered with water, as level as a flat roof. All life had perished and mankind had turned into clay!”

The memories brought tears to Ziusudra’s eyes and his voice quivered as he continued. “Wherever I looked, I saw only water. I sent out birds to seek land, but there was none. We sat and mourned for many days. . . . But then the waters began to recede, and one day the dove I had sent out did not return, and we knew that there was land somewhere. Whereupon Puzuramurri, the navigator appointed by Enki, directed the boat to the twin peaked Mount Nisir as the lord Enki had instructed. There, at night, the boat shuddered and stopped. We had struck dry land!”

“The Deluge was over!” Gilgamesh exclaimed.

“The tidal wave, yes, but not the calamity. I let all that were in the ship out and offered a burnt sacrifice. As the full majesty of the two peaks came into view, we could see the skyships landing, one after another. One by one they landed, until the lords Enki and Enlil came, too. He saw us and was furious and he shouted, ‘Who broke the oath and to an Earthling revealed the secret?’ At this point the wise Sud soothed his anger and brought up the matter of my divine seed. The others spoke up too, asking for leniency. At last Enki spoke up. ‘Valliant Enlil, my brother,’ he said, ‘to till the land and tend the orchards and shepherd the sheep and mine the gold, the Earthlings are needed. Without mankind, the gods cannot remain. If on Earth the Anunnaki are to stay, with mankind they must share it!’”

“And Enlil was swayed?” Gilgamesh asked.

Ziusudra raised a hand, indicating he was not to be interrupted. “He took counsel of the wise words, but was not forgiving. Let the offspring of Ziusudra multiply and spread, but with sickness and death be afflicted. Let mankind share the Earth with the Anunnaki, but be split up and divided into regions. Let some worship my house and some that of my half-brother Enki, but the two shall not mingle. . . .”

His voice trailed off and he fell silent.

“That calamity, the awesome deluge, how long ago was it?” Gilgamesh asked.

“Nibiru has already come and gone twice since then,” Ziusudra replied.
Zecharia Sitchin

"In Mr. Sitchin’s [work], evolution and creationism collide. He has spent his life arguing that people evolved with a little genetic intervention from ancient astronauts who came to Earth . . . He has studied ancient Hebrew, Akkadian and Sumerian, the language of the ancient Mesopotamians, who brought you geometry, astronomy, the chariot, and the lunar calendar. And in the etchings of Sumerian pre-cuneiform script--the oldest example of writing--are stories of creation and the cosmos that Mr. Sitchin takes literally."

The King Who Refused to Die

The Anunnaki and the Search for Immortality