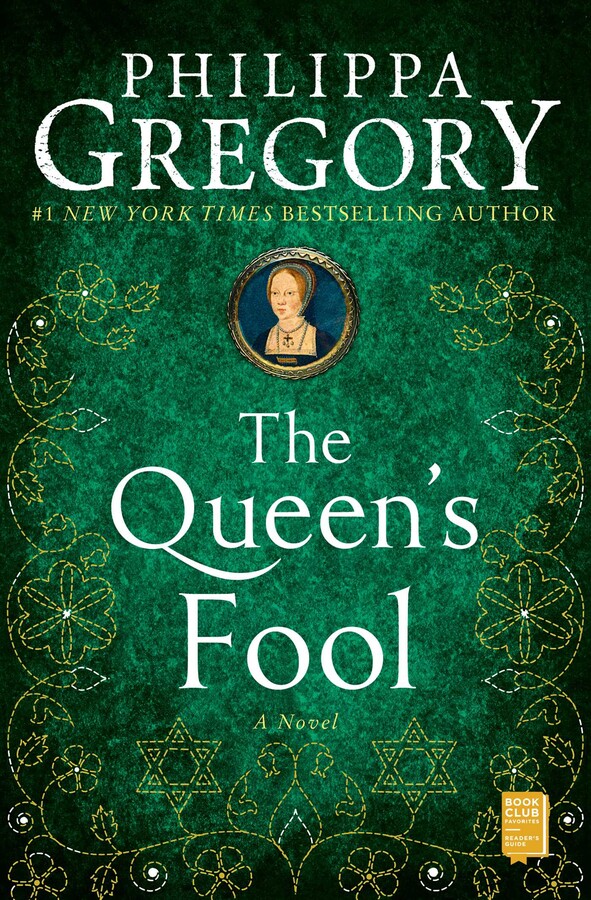 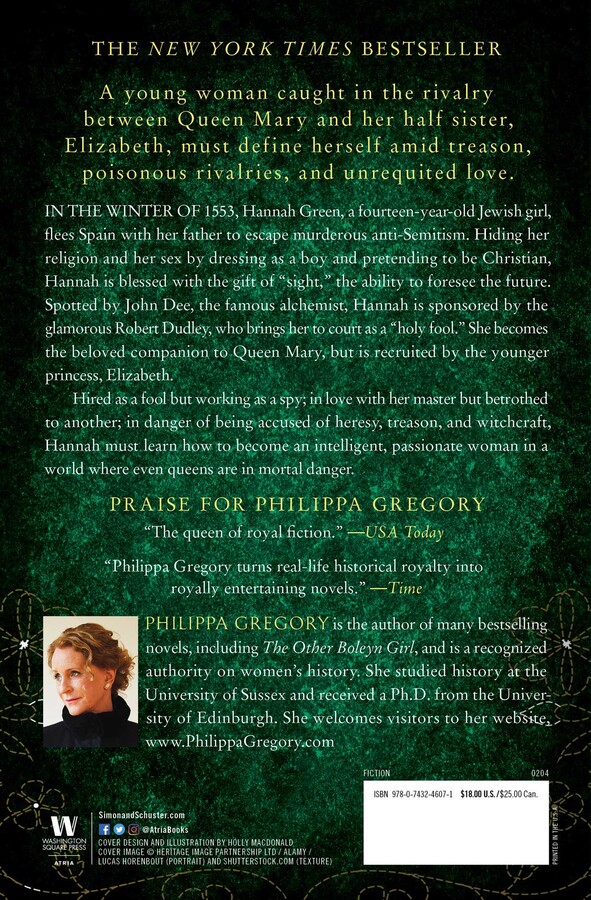 #1 New York Times bestselling author and “queen of royal fiction” (USA TODAY) Philippa Gregory weaves a spellbinding tale of a young woman with the ability to see the future in an era when destiny was anything but clear.

Winter, 1553. Pursued by the Inquisition, Hannah Green, a fourteen-year-old Jewish girl, is forced to flee with her father from their home in Spain. But Hannah is no ordinary refugee; she has the gift of “Sight,” the ability to foresee the future, priceless in the troubled times of the Tudor court. Hannah is adopted by the glamorous Robert Dudley, the charismatic son of King Edward’s protector, who brings her to court as a “holy fool” for Queen Mary and, ultimately, Queen Elizabeth. Hired as a fool but working as a spy; promised in wedlock but in love with her master; endangered by the laws against heresy, treason, and witchcraft, Hannah must choose between the safe life of a commoner and the dangerous intrigues of the royal family that are inextricably bound up with her own yearnings and desires.

Teeming with vibrant period detail and peopled by characters seamlessly woven into the sweeping tapestry of history, The Queen’s Fool is a rich and emotionally resonant gem from a masterful storyteller.

Touchstone
Reading Group Guide
The Queen's Fool
1. What kind of tone does the novel's opening scene instantly set, and what does it tell us up front about Hannah's and Elizabeth's characters? If you've read other fictional accounts of Elizabeth's life, how does this portrayal of her compare?
2. In public, Hannah plays the fool to Mary's queen, but in private their bond is more intimate. Why is the relationship valuable to each of them, both personally and politically? How is Hannah's connection to Elizabeth different?
3. Hannah is smitten with Robert Dudley from the moment she spots him in her doorway, an angel at his shoulder. How would you describe the bond that develops between them -- and how does it change over time?
4. What are the advantages and disadvantages of being the queen's fool instead of a normal courtier?
5. Haunted by the Spanish Inquisition, Hannah describes her Judaism as "some sickness that we pass on," claiming that Jews are condemned to "a lifetime of fear, not Chosen so much as cursed." How do her feelings toward her faith change over the course of the story and why?
6. In the grip of her Sight, Hannah delivers this prophecy: "There will be a child, but no child. There will be a king but no king. There will be a virgin queen all-forgotten. There will be a queen but no virgin....[Dudley] will die, beloved by a queen, safe in his bed." Ultimately, how does history unravel her cryptic prediction?
7. As Mary's marriage falters and her unhappiness grows, she becomes increasingly obsessed with restoring the glory of the Catholic Church through the fires of an English inquisition. Given that Hannah's own mother was killed in just such a fire, how is she able to justify Mary's bloody reign? Did you sympathize with her unswerving loyalty?
8. What changes in both Hannah and Daniel allow their initially contentious relationship to blossom into love? Did you agree with Hannah's decision to leave him when she discovers another woman has borne his child?
9. How does King Henry VIII's dishonorable treatment of Catherine of Aragon continue to affect England even years after their deaths? Why is Mary driven to convert all of England back to Catholicism?
10. Poised to burn books that could condemn her and her father as heretics, Hannah stays her hand, explaining, "If I burned them I was no better than the Inquisition which had killed my mother. If I burned them, I became as one of those who think that ideas are dangerous and should be destroyed." What would you have done in her place? In a world where knowledge was very dangerous, how does Hannah's Sight make her both powerful and vulnerable?
11. What is your estimation of Dudley's character? Do you think he is a true friend to Hannah?
12. Why does Hannah cling to the boyish dress of the fool for so long? Why is she so afraid to become a woman, and what finally inspires her transformation?
13. At the end of her life, Mary finds herself in the place she has most feared: She is a forgotten queen, cast aside by her husband and her people, overthrown in their hearts by a Boleyn girl, just as her mother was. Do you think that this end was her destiny? Are there other paths she might have chosen that would have led her to a long and happy reign?
14. If you're familiar with Elizabeth's history, discuss how the events in this novel foreshadow both what is to come in her reign as queen and in her relationship with Robert Dudley.