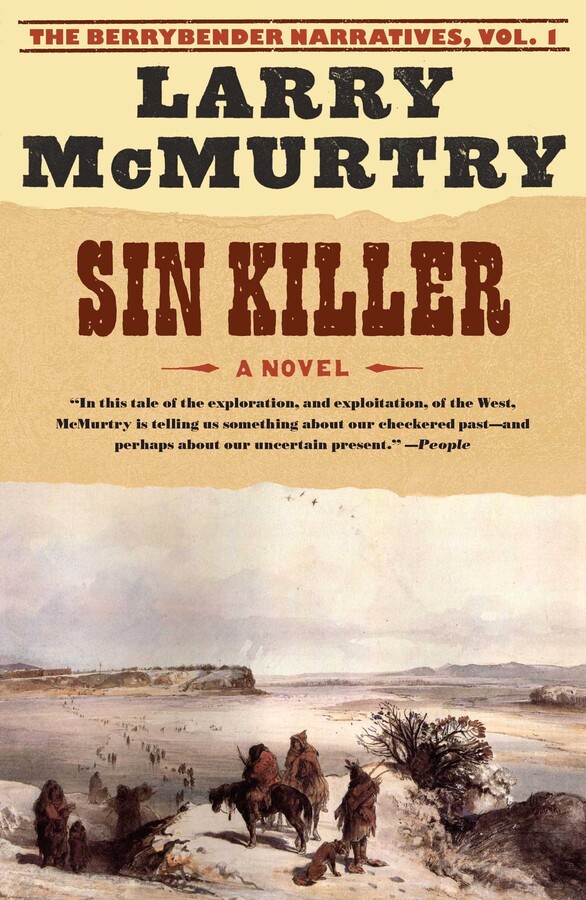 By Larry McMurtry
LIST PRICE $14.99
PRICE MAY VARY BY RETAILER

From Pulitzer Prize–winning author Larry McMurtry comes the first in a four-volume epic journey through the early American frontier, featuring the Berrybender family, English nobility adrift in the American West in the 1830s.

It is 1830, and the Berrybender family—rich, aristocratic, English, and hopelessly out of place—is on its way up the Missouri River to see the untamed West as it begins to open up. Lord and Lady Berrybender have abandoned their home in England to broaden the horizons for themselves and their three children. With irascible determination—and a great deal of outright chaos—the party experiences both the awesome majesty and brutal savagery of the unexplored land, from buffalo stampedes and natural disasters to Indian raids and encounters with frontiersmen and trappers, explorers, pioneers, and one part-time preacher known as "the Sin Killer." Sin Killer, the strong, silent Westerner, captures the heart of the strong-willed, beautiful Berrybender daughter, Tasmin. But their fast developing relationship can only bring more trouble for the Berrybender's.

Packed with breathtaking adventure, charming romance, and a sense of humor stretching clear over the horizon, Sin Killer is a truly unique view of the West that could only come from the boundless skill and imagination of Larry McMurtry.

In the darkness beyond the great Missouri's shore...

In the darkness beyond the great Missouri's shore at last lay the West, toward which Tasmin and her family, the numerous Berrybenders, had so long been tending. The Kaw, an unimpressive stream, had been passed that afternoon -- Tasmin, Bobbety, Bess, and Mary had come ashore in the pirogue to see the prairies that were said to stretch west for a thousand miles; but in fact they could hardly see anything, having arrived just at dusk. The stars were coming out -- bright, high stars that didn't light the emptiness much, as a full moon might have done. Bess, called Buffum by the family, insisted that she had heard a buffalo cough, while Bobbety claimed to have seen a great fish leap at dusk, some great fish of the Missouri. The three older Berrybenders tramped for a time along the muddy shore, trailed, as usual, by the sinister and uncompromising Mary, aged twelve, whom none of them had invited on the tour. In the last light they all stared at the gray grass and the brown slosh of water; but the great fish of the Missouri did not leap again. Disappointed, the agile Bobbety at once caught a slimy green frog, which he foolishly tried to force down Mary's dress, the predictable result of his actions being that the frog squirmed away while Mary, never one to be trifled with, bit Bobbety's forefinger to the bone, causing him to blubber loudly, to Buffum's great annoyance and Tasmin's quiet contempt. Though Bobbety attempted to give his sister a sharp slap, Mary, like the frog, squirmed away and, for a time, was seen no more.

"It is said that there are no schools anywhere in the American West, in this year of our Lord 1832," Bess declaimed, in her characteristically pompous way. The three of them were attempting to row the pirogue back to the big boat, but in fact their small craft was solidly grounded on the Missouri mud. Bobbety, muttering about lockjaw and gangrene, dropped the only paddle, which floated away.

"Do get it, Tasmin...I'm bleeding...I fear the piranhas will inevitably attack," Bobbety whined; his knowledge of natural history was of the slightest. Tasmin might readily have given him a succinct lecture on the normally benign nature of the piranha, in any case a fish of the Amazon, not the Missouri, but she decided to postpone the lecture and catch the paddle, a thing soon accomplished, the Missouri being distressingly shallow at that point of its long drainage. Tasmin got wet only to her knees.

In her large family, the ancient, multifarious Berrybenders, Tasmin was invariably the one who recovered paddles, righted boats, posted letters, bound up wounds, corrected lessons, dried tears, cuffed the tardy, reproved the wicked, and lectured the ignorant, study having been her passion from her earliest days.

Far out in the center of the broad stream, the steamer Rocky Mount seemed to be as immovable as their humble pirogue -- mired, perhaps, like themselves, in the clinging Missouri mud. Sounds of the evening's carouse were just then wafting across the waves.

"In this tale of the exploration, and exploitation, of the West, McMurtry is telling us something about our checkered past -- and perhaps about our uncertain present."
-- People

"Irresistible...full of blood, blunder and myth."
-- The New York Times

By Larry McMurtry
LIST PRICE $14.99
PRICE MAY VARY BY RETAILER