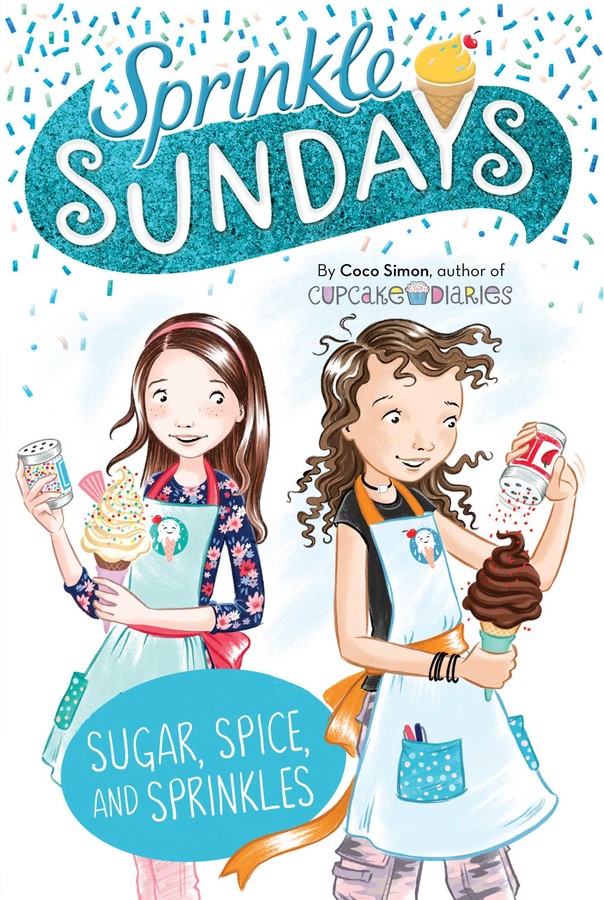 Sierra has a sprinkle of fun in the ninth delicious book in the Sprinkle Sundays series from the author of the Cupcake Diaries and Donut Dreams series!

Sierra is tired of being known as “the sweetest girl in the ice cream shop,” but she still wants everybody to like her! Can she spice up her personality (and learn to say no occasionally), and still keep all her friends? Sierra decides to pour her feelings into an original song—and through music, she’s able to find her voice.

CHAPTER ONE SWEET SIERRA
I hurried down the school hallway, balancing a large Tupperware container, my reusable lunch bag, my backpack, and a separate small duffel bag that held notes, sheet music, and a granola bar for my band practice later. When you participated in as many activities as I did, you needed to be prepared. It didn’t hurt to bring a few snacks, either.

That day’s student council meeting had been pushed back twice because of me and my other commitments, like rehearsals with my amazing band, the Wildflowers; my soccer and softball team practices; and my weekly shifts at Molly’s, the best ice cream parlor in town, where I worked with my two best friends every Sunday.

Student council was important to me too, though. I loved being the secretary and taking notes and getting to weigh in and vote on upcoming school events and fund-raisers. I was helping to make my school a more fun and friendlier place. What could be better?

So, to make sure everyone on the council knew how much it meant to me that they’d moved the meeting around (twice), I’d spent some time the day before baking cookies to bring to the meeting. People appreciated cookies, especially after school when they were starving.

I broke into a jog as room 215B came into sight. Then I whooshed through the door, and all of my bags and packages banged and slapped against the doorframe and desks as I made my way to the big table by the windows. Let’s just say my entrance was loud, even for me.

Everyone turned to see if a herd of elephants was coming, and then made faces like, Oh, it’s not elephants, it’s just Sierra. The four student council members (besides me) were already there, even though it was only 3:13 and the school bell had just rung at 3:10. How had they all gotten there so fast? I had practically run from my locker, and it was only one floor down.

“Hello, everyone!” I said cheerfully. I plopped the large Tupperware container onto the table and began depositing my other bags into a chair. “Help yourselves!”

“Ooooh, what’s in here?” asked Claire Bright, sliding her thumb under the corner of the Tupperware lid. Claire was in eighth grade and was president of the student council. She worked very hard on all council business and always wanted everything to be just right. “Wow, Sierra. Really, wow! You made emoji cookies?”

She pulled one out and held it up to show everyone. I beamed. What had started out as making plain old sugar cookies (round ones—I didn’t even use a cookie cutter because I didn’t have time for the dough to chill and set) had become much more interesting when I’d discovered we had a lot of yellow food dye. So I’d whipped up some icing and given all the cookies yellow faces, then had had a blast adding eyes and mouths and different common emoji expressions. Even my identical twin sister, Isa, who basically did the opposite of everything I did and would say she didn’t like something just because I liked it, had stopped by the kitchen to admire them. She’d even gotten into the spirit of things and decorated a few Yuck! faces with tongues sticking out.

“These are awesome,” said Lee Murphy, our treasurer and resident council grump, biting into a well-chosen frowny face.

Hanna Okoye (sixth-grade rep who recently joined the student council) and Vikram Kapoor (vice president) both nodded in agreement and reached into the Tupperware to grab a few for themselves. I waited until everyone had a cookie before choosing a toothy smiley face for myself.

Everyone was munching and smiling, and I could tell it was going to be a good meeting.

Claire, finishing her third cookie, called the meeting to order. “First order of business—let’s all thank Sierra for being so nice and bringing us these awesome cookies! I guess it made this meeting worth the wait.”

Everyone clapped, and I gave a silly half bow.

“Really, Sierra—you are just soooo nice,” Claire said. “Someone asked me the other day about you, and I said Sierra is a sweetheart.”

Hanna, who tended to be a bit shy in meetings because she was the only sixth grader, said, “Yeah, you are so sweet, Sierra.”

“And a good baker, too,” said Lee, polishing off his fourth or fifth cookie. “Sweet Sierra.”

I was starting to feel a little self-conscious now, like they were describing a cookie, not me. So I jumped right into reading the minutes from the previous meeting, to change the subject.

“We need to plan Spirit Week,” I read from my notes, “which includes making a plan for promo materials and an assembly, and also deciding on the themes for the week.”

“I love Spirit Week,” said Claire. “It’s the best! And since it’s my last year here at MLK, I want to make sure we do an awesome job, okay?”

Hanna and the others quickly agreed, and we started brainstorming ideas. We made a list of how many posters we’d need, who was going to make them, and the basics of what they would look like and say. Then we started discussing our assembly, which had mostly been arranged for us and would include a speaker who was an alumna of the school giving a speech titled “Achieving Success under Stress.”

I almost felt like I could give that speech, since most of the time I was running from one thing to the next, trying to make it all work and be successful. I giggled to myself, thinking how hard my two best friends, Allie Shear and Tamiko Sato, would laugh if I told them I was going to give that speech. They always teased me about my overly busy schedule, and both of them preferred to live life on the slower, calmer side.

“Why are you laughing, Sierra?” asked Lee. “You don’t like the red-and-gold idea?”

“Huh?” I said, not realizing I’d tuned out for a moment. I checked my notes, which I’d been taking very diligently, and saw that Lee had suggested having a Red and Gold Day for one of our spirit dress-up days, in honor of our school colors.

“I wasn’t laughing at that!” I replied hastily. “I was just thinking of how great Spirit Week is going to be, and it made me happy, so I guess I… just happy-laughed.” I smiled and shrugged sheepishly, realizing I sounded a little kooky, but better that than admitting I’d been daydreaming and thinking of something else.

Vikram shook his head. “So happy and sweet! You’re like a baby bird, Sierra.”

I didn’t really see how I was similar to a baby bird, but since he seemed to mean it as a compliment, I said nothing and went back to taking notes.

“Do we have some ideas for the other four days of the week?” I asked. “Other than Red and Gold Day, I mean?”

Everyone started shouting out ideas, and I wrote them down as fast as I could.

We were coming up with so many ideas that I didn’t know how we’d choose just five total. There were endless possibilities for Spirit Week, which was why it was fun every year, and why I was glad to be on the student council and able to help make these decisions!

I grabbed a second cookie for myself and kept jotting down notes, until the clock read four fifteen.

“Hey, guys, I’m sorry to do this, but I have to leave a little early—I’ve got a band practice now and I couldn’t push it until later….” I hated feeling guilty when I had to leave one thing to go to another, but with my schedule, it happened fairly often.

“It’s okay, Sierra,” Claire said. “We understand, and I think we’ve had a really productive meeting today. But leave these delicious cookies behind, will you?”

I had planned to take the extras for my band, but I couldn’t say no when Claire was being so nice about me leaving early. So I just smiled and said, “Of course! Enjoy. And I can’t wait for Spirit Week! We’re going to have so much fun!”

I waved to everyone and set off for my bandmate Reagan’s house, feeling lighter without the heavy Tupperware container. I couldn’t wait to tell the band some of the ideas we’d come up with for Spirit Week.

Then another idea occurred to me. What about a Rock ’n’ Roll Day? That would be fun and easy to do—just dress like your favorite rock star! Spirit Week was always the best week of the year. And I’d gotten to help plan it and go spend time with my band.

“Who says Mondays are terrible?” I asked myself as I hiked down the school driveway and headed in the direction of Reagan’s house. “If you ask me, I think they’re pretty sweet.”

From cupcakes to ice cream and donuts! Having written over thirty books about middle school girls and cupcakes and ice cream, Coco Simon decided it was time for a change; so she’s switched her focus to her third favorite sweet treat: donuts! When she’s not daydreaming about yummy snacks, Coco edits children’s books and has written close to one hundred books for children, tweens, and young adults, which is a lot less than the number of cupcakes, ice cream cones, and donuts she’s eaten. She is the author of the Cupcake Diaries, the Sprinkle Sundays, and the Donut Dreams series.