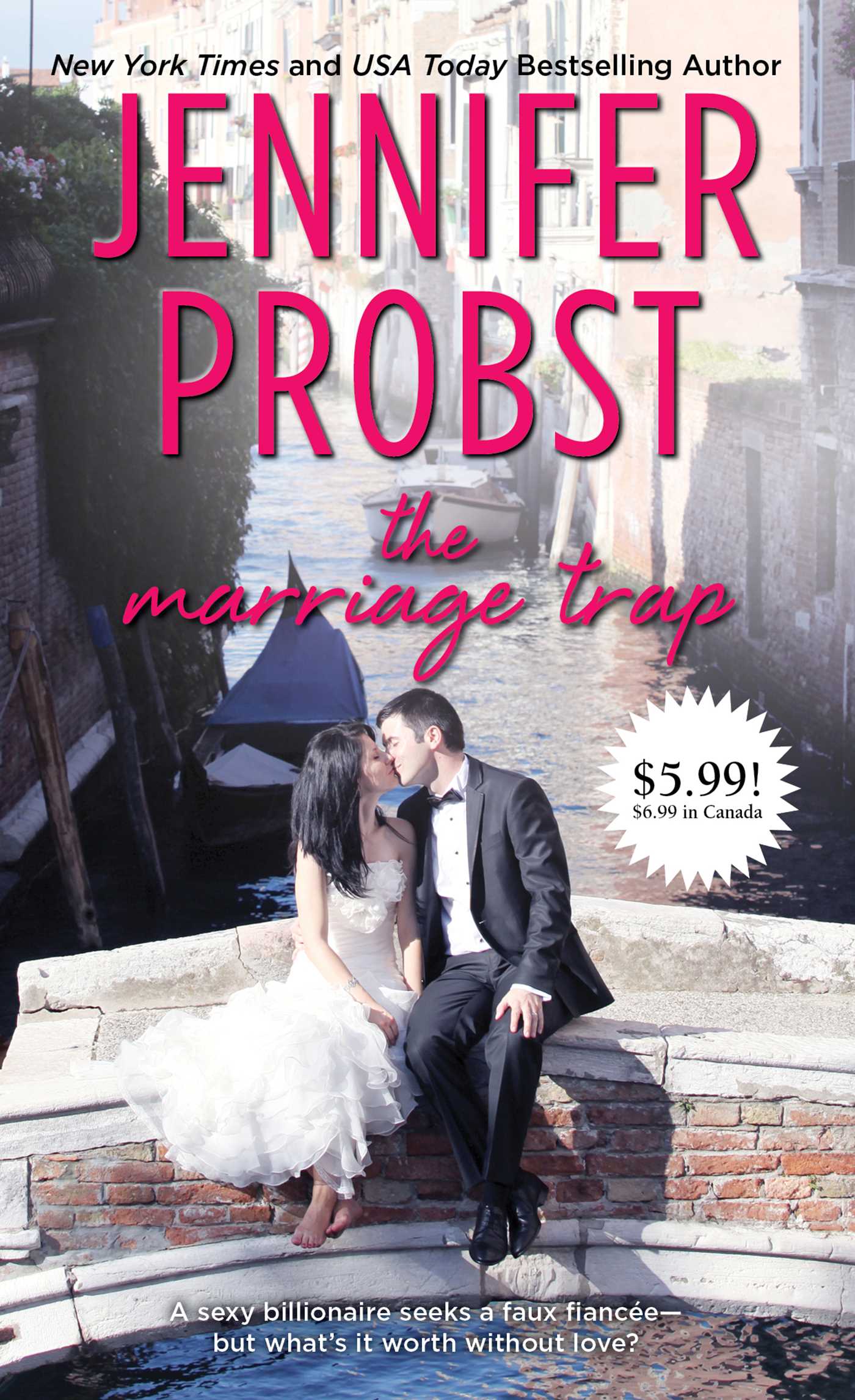 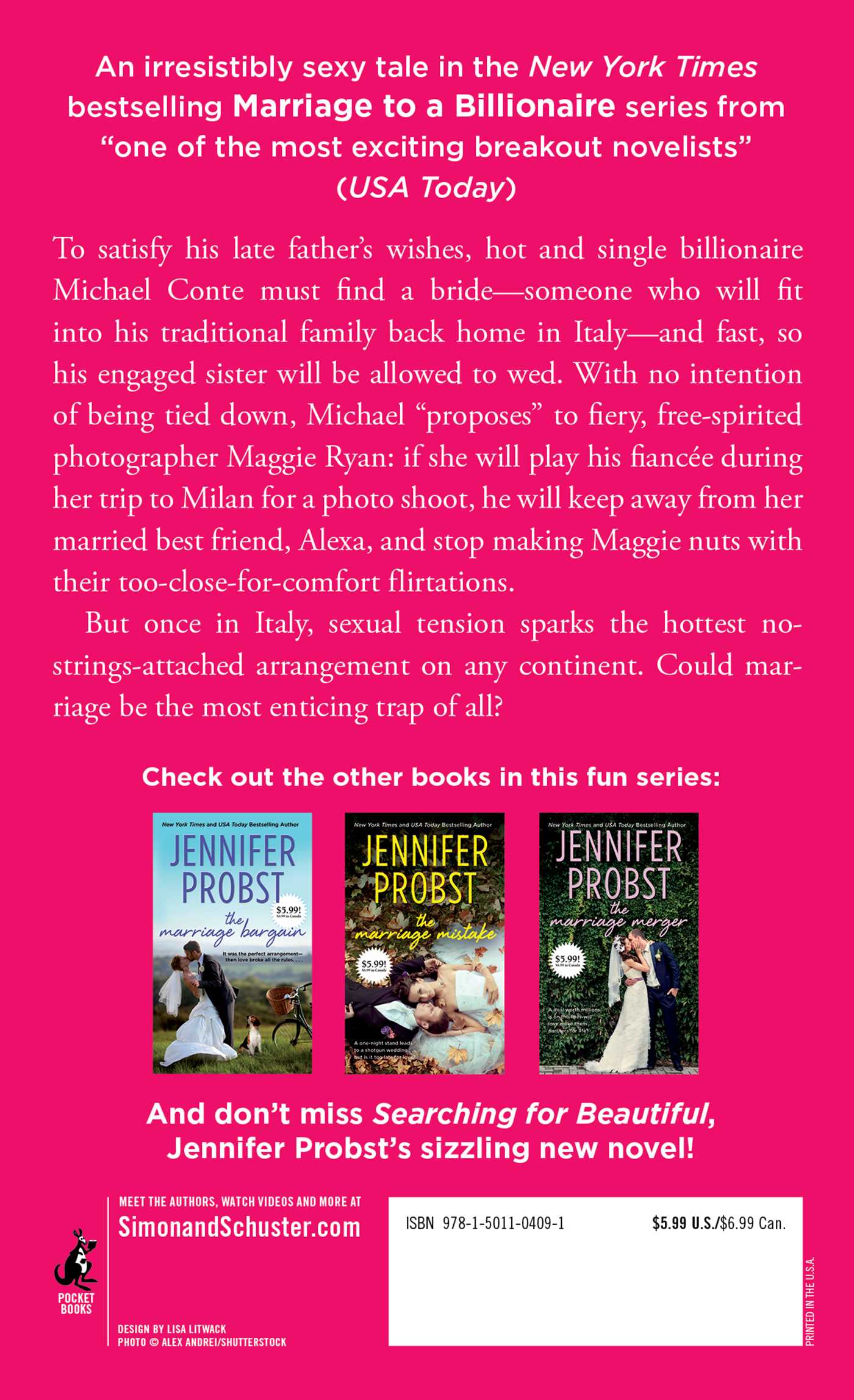 The sexy second book in the New York Times and USA TODAY bestselling Marriage to a Billionaire trilogy by “one of the most exciting breakout novelists” (USA TODAY) Jennifer Probst.

To satisfy his late father’s wishes, hot and single billionaire Michael Conte must find a bride—someone who will fit into his traditional family back home in Italy—and fast, so his engaged sister will be allowed to wed. With no intention of being tied down, Michael “proposes” to fiery, free-spirited photographer Maggie Ryan: if she will play the part of his fiancée during her trip to Milan for a photo shoot, he will keep away from her married best friend, Alexa, and stop making Maggie nuts with their too-close-for-comfort flirtations.

But once in Italy, sexual tension sparks the hottest no-strings-attached arrangement on any continent. Could marriage be the most enticing trap of all?

Searching for Someday one
I’M MOVING OUT.”

Slade watched his sister drag her oversized floral pieces of luggage down the hallway and drop them at the front door. A strange panic roared through his system, but he stood frozen in the foyer, watching the scene unfold. Hell, no. She wasn’t ready to go anywhere on her own yet, but somehow he needed to convince her without looking like a crazed control-freak brother. He kept his voice gentle and firm.

“Jane, I don’t think it’s a good idea. I know you want a place of your own, but I don’t think you’re ready. Besides, I’ll get lonely by myself. Give it some time, and I’ll help you find an apartment.”

Jane turned fast, hands on hips, that furious female scowl he knew well. Bottom line, he’d screwed up his words again. “First off, give me a little credit. I’m ready. I appreciate you letting me live here, but I should’ve moved out a year ago. And the only reason you’re lonely is your refusal to stay with a woman past one night.”

Slade winced. Unfair. He was always discreet when it came to women, not needing his sister to try to bond with any of them, since long-term commitment was doomed from the start. The statistics alone of marriage breakups caused a shudder.

She marched into the open living room and headed toward the bookcase to grab a few off the shelves. Crap, was that The Chew’s new cookbook? He hadn’t even looked at the pictures yet. “Be reasonable, Jane. You have nowhere to go, and I don’t want you staying at a crappy studio in Manhattan. It’ll cost a million dollars and won’t be safe. Are you still upset over your breakup? We can go slash his tires, get drunk, and watch chick flick movies. That’s what women do, right?”

Jane tipped her head back and laughed. “God, Slade, if I didn’t love you so much I’d murder you. I have a place already. I rented an apartment in Verily on the river. I quit my job and lined up a new one at the local community college there.”

The room spun. He stared at his normally shy, logical, steady sister and wondered what she’d drunk to turn into Mr. Hyde. “Quit your job? You were working on tenure!”

“And I hated it there. Stuffy, pompous, and boring. I hate Manhattan, too. It’s crowded and hurts my head most of the time.” Jane dragged in a breath and walked over, stuffing the books into her tote bag. Her long jet-black hair sprung into a whirlwind of curls, and her cocoa-brown eyes peered at him sadly from behind thick black glasses. “I can’t do this anymore,” she said. “I need a fresh start on my own terms. Verily is small and quaint, and the college focuses on using creativity in literature. I can grow there. Maybe meet a man who won’t wring me dry and dump me.” Her laugh was totally wry, and Slade’s heart squeezed in sheer fear.

He couldn’t let her go. If something happened, it would be his fault. Again. At least if she were under his roof, he could easily gauge if she was down-spiraling. Slade swung into lawyer mode. Being one of the top divorce lawyers in the state had to be good for something other than money. “I understand you want to be on your own. I agree it’s time, but quitting your job and running off to a town you don’t know is dangerous. I’ll go with you to Verily this weekend. I’ll help you look, maybe meet some people there so you’re not alone, and we’ll figure it out together.”

Her voice rose to a dangerous level. “I don’t want to figure it out together! I want to figure things out myself. Oh, for God’s sake, look at this place.” She flung out her arm and gestured to his expensive loft apartment situated in the coveted location of Tribeca. The huge open space was split into two levels with a sleek glass staircase connecting them together. Windows lined the walls and overlooked the city of Manhattan. Pricey art, bamboo floors, edgy glass tables, granite counters, and huge leather recliners completed the look of bachelor in the city.

“What’s wrong with it? We have plenty of room here.”

“This is your place! I haven’t had anything for myself in the past three years. I’m twenty-eight years old. It’s time I do things on my terms without anyone worrying if I’m going to emotionally lose it when something goes wrong.”

He winced. Jane was extremely sensitive and had always struggled in such a brutal society. He watched a long line of men crush her like a gentle flower under their heels until there was nothing left but a few stray petals. He’d sworn never to let anyone hurt her again. He had to make her stay.

“Sweetheart, I know you’re much stronger now. Don’t ever think I’m waiting for you to implode. I just think it would be better to wait.”

“I don’t.” Jane opened the closet door, grabbed her black wool coat, and stuffed her arms into the sleeves. “When I get settled, you can bring the rest of my stuff and visit. I think you’ll like it in Verily. And I won’t be lonely for long. I’ve decided to sign up with a matchmaking agency.”

Yep. She’d definitely slugged the Mr. Hyde punch. “Are you kidding me? Do you know how many of those get closed down for fraud? There’s no such thing as the perfect match, and you know it. What is going on with you?”

She stuck her chin out. “I’m tired of being afraid and meeting the wrong men. Kinnections is a well-respected company. I like the women I met there, and I trust them. So don’t worry about me holing up in my apartment and getting depressed. I’m going out there and meeting people. I’m different this time.”

“This place is going to take your money and give you false expectations. What if it doesn’t work out and you crash? I’m not going to stand around helplessly while you’re destroyed again by some ruthless people out for your money.”

She let out an outraged squeal. “Are you listening to yourself? God, stop protecting me. I’m a different person than I was three years ago and you’re stifling me! Mom and Dad wouldn’t want me to live tucked away in your man cave while I watch life happen to other people.”

“Mom and Dad never found you on a bathroom floor overdosed on pills. Mom and Dad didn’t hold you in their arms, praying you wouldn’t die!”

The silence shattered around them. Slade closed his eyes briefly, grief cutting out pieces of him. The words entwined with a blame and a plea that twisted his stomach. The memory of finding her suicide attempt changed him. He wanted her safe. Couldn’t she understand?

His voice broke. “I’m so sorry, Jane. I didn’t mean to bring that up.”

Hurt carved out the lines of her face, and her lower lip trembled. “Yes. You did. I’m sorry I put you through that. But I’m not the same person anymore. I deserve happiness and I’m going to take it. Yes, I may get hurt along the way, but I can handle it now, Slade. I’m stronger.” She tossed her tote over her shoulder and grabbed the handle of her suitcase. “I don’t blame you for not trusting me. But I’m going to prove myself. You’re not responsible for me any longer.”

“For God’s sake, let me help you. I’ll buy you dinner and we’ll talk more about this.”

She threw open the door. “No. The doorman is meeting me downstairs.”

“But I need a number, an address, something.”

“I’ll call when I get settled. Love you.”

She left. This time, he didn’t stop her. Part of him recognized it was important she carve her own way. The other half decided he’d rip apart anything that tried to hurt her. Or anyone.

With a low curse, he stalked to his computer and typed in the words.

He stared at the screen for a while and made his decision. 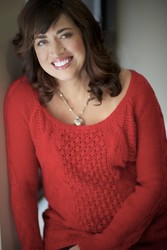 Jennifer Probst wrote her first book at twelve years old. She bound it in a folder, read it to her classmates, and hasn’t stopped writing since. She took a short hiatus to get married, get pregnant, buy a house, get pregnant again, pursue a Master’s degree in English literature, and rescue two shelter dogs. Now she is writing again. She is the New York Times, USA TODAY, and Wall Street Journal bestselling author of sexy and erotic contemporary romance. She was thrilled her book, The Marriage Bargain spent twenty-six weeks on the New York Times bestseller list. Her work has been translated in over a dozen countries, sold over a million copies, and was dubbed a “romance phenom” by Kirkus Reviews. She makes her home in upstate New York with the whole crew. Her sons keep her active, stressed, joyous, and sad her house will never be truly clean.