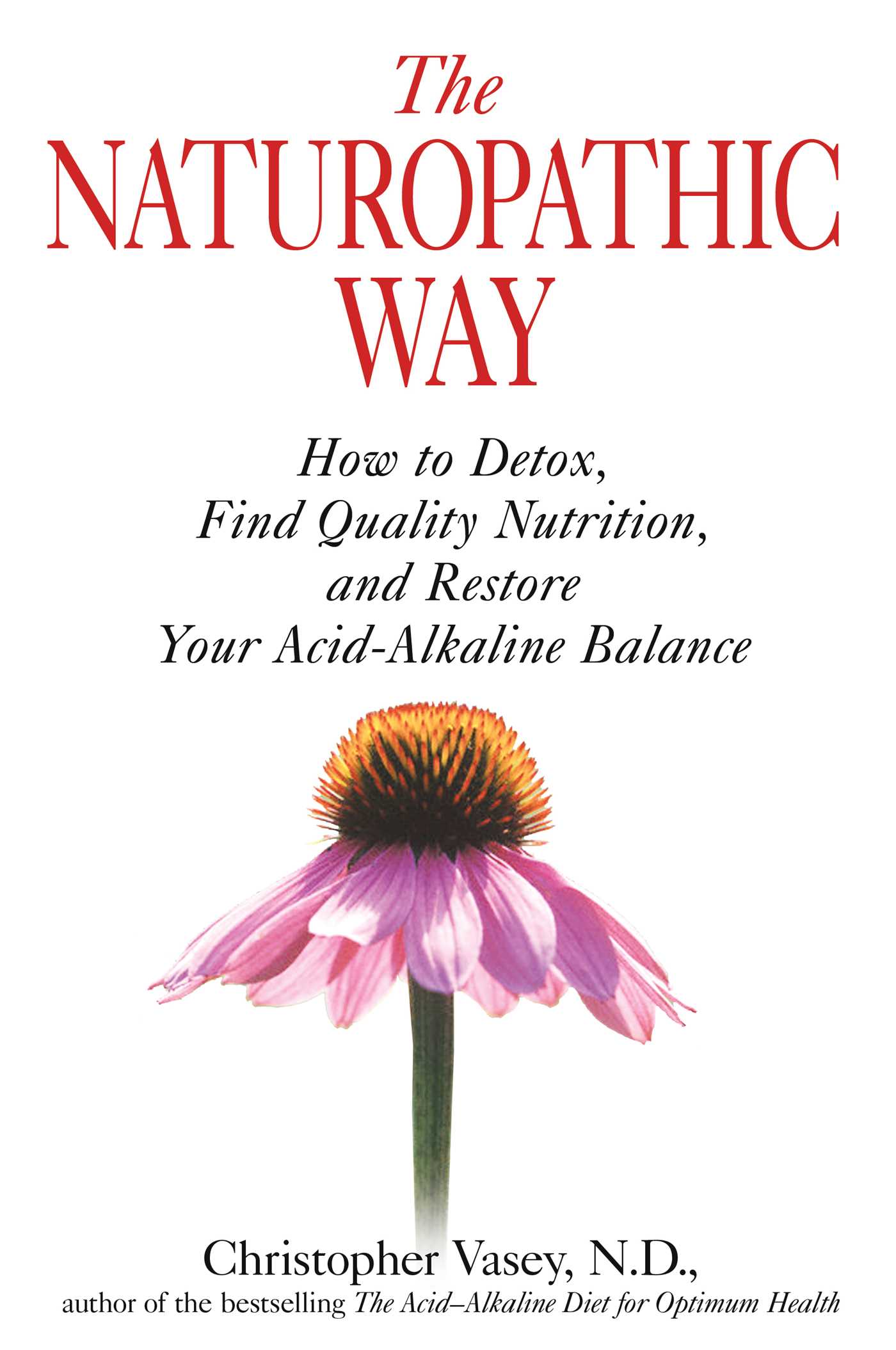 How to Detox, Find Quality Nutrition, and Restore Your Acid-Alkaline Balance

Illness does not appear by chance. It is the direct result of the way we live--what we eat and drink, if we have enough physical exercise, and our state of mind. The basic principles of naturopathy recognize this reality, and its treatments are designed to support our present state of good health or to help us get back to it.

Christopher Vasey, author of the bestselling The Acid-Alkaline Diet for Optimum Health, explains that naturopathic treatments do not attempt to cut off symptoms but instead focus on removing toxic causes. All diseases stem from an unbalanced or dysfunctional biological terrain. This occurs when the body’s internal cellular environment becomes clogged with wastes or when it lacks essential vitamins and mineral nutrients. In this naturopathic guide to health and healing, Vasey shows how to remove toxins from the body using diets, fasts, and detoxifying cleanses. He points to the key role played by the acid-alkaline balance in maintaining peak energy and explains what natural supplements to take to restore deficient nutrients in the body. Vasey believes that the greatest part of achieving health is in our own hands. His book provides a comprehensive set of naturopathic tools to help us restore our optimum health.

The Naturopathic Concept of Illness

Helping the Body to Heal Itself

In allopathic medicine the diagnosis of the patient is considered to be the most important point to be resolved, because medical prescriptions will be determined by clues that indicate a specific disease. These clues are revealed by examination of the patient. This kind of therapy looks like a kind of equation: this disease = this medication. Until there is a diagnosis, treatment cannot begin. The patient is therefore placed under observation, which in reality means that the biological terrain will be left to continue to deteriorate until a diagnosable local disorder appears.
It is only then that a course of treatment can be initiated and the correct therapeutic agent chosen to combat the illness.
There is another major inconvenience with this concept of medicine. When a new and unknown disease appears, such as AIDS, the patient is forced to invest all his hope in the day when the disease will be fully identified and a cure manufactured.
Naturopathy does not allow itself to be halted by a “new” and “unknown” disease. All that is new about any illness is the way it manifests a disorder buried in a constricted biological terrain. Even in the absence of a diagnosis in the standard allopathic sense, treatment can begin. There is no need for the patient to be placed under observation, to wait while his problems grow worse and hope for the discovery of a cure. The correction (draining wastes and filling deficiencies) can be started at once.
In allopathic medicine the diagnosis is based on the illness; in naturopathy it is based on the patient. It is not so much a diagnosis as it is a health assessment indicating what imbalances need correction. The therapist takes an interest in the patient’s lifestyle, organ strength, immune system, nature and causes of body fluid congestion, and deficiencies.
The therapist is concerned with the total human being--physical, mental, and spiritual--rather than isolated fragments of his or her total being, because the corollary to a fragmentary diagnosis is a fragmentary treatment. Naturopathy strives to realize an in-depth treatment that addresses the profound nature of the illness rather than its superficial manifestations.

It is worth taking a moment here to ask ourselves what makes a remedy effective. How does it work? Customarily, one has the impression that the remedy encompasses all the healing powers necessary to effect a cure and that it is the unique active agent. If we define the effectiveness of a remedy by its ability to cause the symptoms of a disease to vanish, this is the way it can seem. But if we consider disease to be a defective state of the body’s internal cellular environment, we need to question how a remedy, versatile as it may be, can stimulate the excretory organs, purify the tissues, strengthen the immune system, fill the body’s deficiencies, and dissipate local symptoms all by itself.
The remedy does not heal the disease; it helps the patient self-heal. The powers of healing reside within the body. They are the body’s vital forces, what the ancients called its medicalizing nature, and what moderns call the immune response. Therefore the conversation is about self-healing, not just healing. No remedy is capable of healing the diseases of a dead person. A corpse lacks the vital, organic force that will be able to stimulate, direct, and support it.
However, it is important to note that naturopathy is not opposed to the use of remedies. It makes use of them, but uniquely, as a supplement to its treatment of the body’s deep-rooted issues. Rather than pinning all possibility of a cure on a sole specific remedy, as allopathy does, it acts on the biological terrain that is responsible for the specific local disorder. Furthermore, because the specific remedies it employs for local disorders are physiological and not chemical, they are accepted into the body’s metabolic circuitry and can be easily used and eliminated by the body. When this is not the case, remedies will only increase the degradation of the biological terrain, creating an effect that is more harmful than beneficial.
It is certainly sometimes necessary to use remedies whose “cure is worse than the illness” when their temporary use makes it possible to get through difficult junctures: an explosion of bacterial activity, intense pain, abrupt weakening of an organ, and so forth. But whereas the use of these remedies should be the exception, it has become the rule. This is why we’re witnessing an explosion of iatrogenic diseases, illnesses that are caused by the medications themselves. The rationale that the iatrogenic illness is less serious than the initial disease is not a valid argument for the use of these medications. Local symptoms and disorders may appear less grave, but the degradation of the biological terrain is aggravated even further by the medication-induced toxic overload, prefiguring new diseases.
It is always disconcerting for those who prescribe chemical medication, as well as for those who use it, to see the procedures employed in natural medicine. How can herb teas and tinctures compete with products that have an incomparably higher concentration of active ingredients? How can applications of water, diet, or massage claim to bring about healing where the most powerful medications remain impotent? Here we should recall that the value of a remedy does not reside in itself but in its capacities to aid, support, and stimulate the body’s own healing powers.

The forces of healing are located inside the body.

The value of a remedy does not reside in itself but in its ability to stimulate these vital forces.
Christopher Vasey

“Christopher Vasey puts naturopathic medicine back on the map in a clear, simple, and beautiful fashion. This wonderfully readable book reveals the basic secrets of the body’s ingenious design, guiding us to a practical understanding of true metabolic healing and transformation. This is the foundational reference work that has long been missing.”

– Marc David, author of The Slow Down Diet and Nourishing Wisdom and founder and director of the Insti

“The only word for Christopher Vasey’s The Naturopathic Way is brilliant. It is the best overview of the naturopathic approach to healing that I have read.”

– Stephen Harrod Buhner, author of The Secret Teachings of Plants

"Every word in this slim volume is carefully chosen, making it a lean yet comprehensive introduction to naturopathy and traditional healing methods. Inexpensive and informative, The Naturopathic Way is an excellent source for those who want to change the way we approach health and healing for the better."

". . . will not only educate the reader, but will empower them to find natural ways of restoring their balance within themselves using naturopathic ways. Highly recommended."

"Aside from the wealth of information packed into this slim volume, The Naturopapthic Way also contains detailed information on how to detox the body, restore Acid-Alkaline Balance and restore general good health. An excellent guide and reference book to maintaining well-being in an increasingly toxic world."

"[Vasey's] book provides a comprehensive set of naturopathic tools to help us restore our optimum health. Great handbook to keep on your shelf for reference."

"Amongst naturopathic writers I've come across, few can match Vasey for the symmetry, simplicity, and directness with which he manages to get his point across. He renders into simple language and instruction what most others prefer to present as complex. If you do nothing more than absorb and inwardly digest the principles of healthy living he describes and codifies in this book, you could end up, in my personal opinion, living a longer, healthier, and happier life than might otherwise have been the case."

“This book is full of good information. The book is not light reading and may take some time to get through it. But it’s worth the effort. The advice Vasey gives can be very beneficial, especially if used under your care giver’s guidance.”

How to Detox, Find Quality Nutrition, and Restore Your Acid-Alkaline Balance