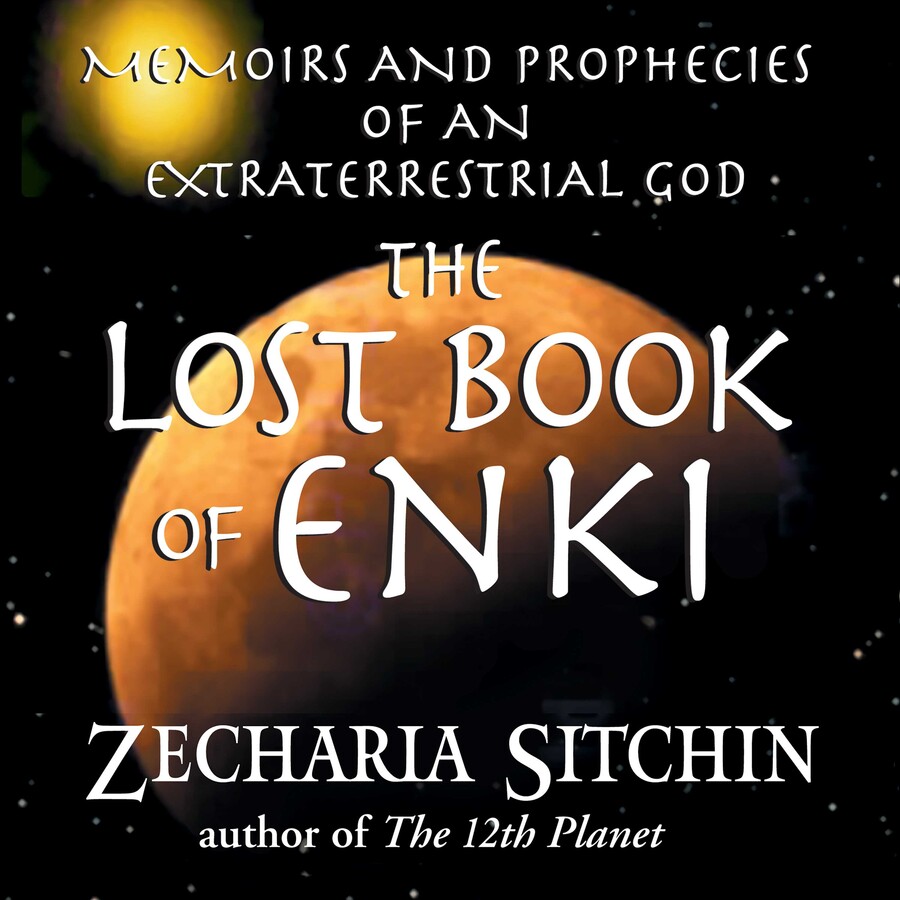 • Explains why these “gods” from Nibiru, the Anunnaki, genetically engineered Homo sapiens, gave Earthlings civilization, and promised to return

Zecharia Sitchin’s bestselling series The Earth Chronicles provided humanity’s side of the story concerning our origins at the hands of the Anunnaki, “those who from heaven to earth came.” In The Lost Book of Enki we now view this saga from the perspective of Lord Enki, an Anunnaki leader revered in antiquity as a god, who tells the story of these extraterrestrials’ arrival on Earth from the planet Nibiru.

In his previous works Sitchin compiled the complete story of the Anunnaki’s impact on human civilization from fragments scattered throughout Sumerian, Akkadian, Babylonian, Assyrian, Hittite, Egyptian, Canaanite, and Hebrew sources. Missing from these accounts, however, was the perspective of the Anunnaki themselves. What was life like on their own planet? What motives propelled them to settle on Earth--and what drove them from their new home? Convinced of the existence of a lost book that held the answers to these questions, the author began his search for evidence. Through exhaustive research of primary sources, he has here re-created tales as the memoirs of Enki, the leader of these first “astronauts.” What takes shape is the story of a world of mounting tensions, deep rivalries, and sophisticated scientific knowledge that is only today being confirmed. An epic tale of gods and men unfolds, challenging every assumption we hold about our past and our future.

Some 445,000 years ago, astronauts from another planet came to Earth in search of gold.

Splashing down in one of Earth’s seas, they waded ashore and established Eridu, “Home in the Faraway.” In time the initial settlement expanded to a full-fledged Mission Earth--with a Mission Control Center, a spaceport, mining operations, and even a way station on Mars.

Short of manpower, the astronauts employed genetic engineering to fashion Primitive Workers--Homo sapiens. The Deluge that catastrophically swept over the Earth required a fresh start; the astronauts became gods, granting Mankind civilization, teaching it to worship.

Then, about four thousand years ago, all that had been achieved unraveled in a nuclear calamity, brought about by the visitors to Earth in the course of their own rivalries and wars.

What had taken place on Earth, and especially the events since human history began, has been culled by Zecharia Sitchin, in his The Earth Chronicles Series, from the Bible, clay tablets, ancient myths, and archaeological discoveries. But what had preceded the events on Earth--what had taken place on the astronauts’ own planet Nibiru that caused the space journeys, the need for gold, the creation of Man?

Would it not be auspicious were one of the key players, an eyewitness and one who could distinguish between Fate and Destiny, to record for posterity the How and Where and When and Why of it all--the First Things and perhaps the Last Things?

But that is precisely what some of them did do; and foremost among them was the very leader who had commanded the first group of astronauts!

Scholars and theologians alike now recognize that the biblical tales of Creation, of Adam and Eve, the Garden of Eden, the Deluge, the Tower of Babel, were based on texts written down millennia earlier in Mesopotamia, especially by the Sumerians. And they, in turn, clearly stated that they obtained their knowledge of past events--many from a time before civilizations began, even before Mankind came to be--from the writings of the Anunnaki (“Those Who from Heaven to Earth Came”)--the “gods” of antiquity.

As a result of a century and a half of archaeological discoveries in the ruins of the ancient civilizations, especially in the Near East, a great number of such early texts have been found; the finds have also revealed the extent of missing texts--so-called lost books--which are either mentioned in discovered texts or are inferred from such texts, or that are known to have existed because they were cataloged in royal or temple libraries.

An oft-quoted example of the extent of lost books is that of the famed Library of Alexandria in Egypt. Established by the general Ptolemy after Alexander’s death in 323 B.C., it was said to have contained more than half a million “volumes”--books inscribed on a variety of materials (clay, stone, papyrus, parchment). That great library, where scholars gathered to study the accumulated knowledge, was burnt down and destroyed in wars that extended from 48 B.C. to the Arab conquest in A.D. 642. What has remained of its treasures is a translation of the first five books of the Hebrew Bible into Greek, and fragments retained in the writings of some of the library’s resident scholars.

It is only thus that we know that the second king Ptolemy commissioned, circa 270 B.C., an Egyptian priest whom the Greeks called Manetho to compile the history and prehistory of Egypt. At first, Manetho wrote, only the gods reigned there, then demigods, and finally, circa 3100 B.C., Pharaonic dynasties began. The divine reigns, he wrote, began ten thousand years before the Flood and continued for thousands of years thereafter, the latter period having witnessed battles and wars among the gods.

One who had been an eyewitness to all those events, indeed a key participant in them, was the leader who had splashed down with the first group of astronauts.

That he had recorded his autobiography is certain, for a long text (stretching over at least twelve tablets) discovered in the library of Nippur quotes Enki’s sayings. Numerous other texts that relate varied aspects of Enki’s role in the ensuing developments serve to complete Enki’s tale; they include a cosmogony, an Epic of Creation, at whose core lay Enki’s own text, which scholars call The Eridu Genesis. For the first time ever, this dispersed and fragmented material has been assembled and used by Zecharia Sitchin to re-create the eyewitness account of Enki--the autobiographical memoirs and insightful prophecies of an extraterrestrial god.

In dealing with the past, Enki himself perceived the future. The notion that the Anunnaki, exercising free will, were masters of their own fates (as well as the fate of Mankind) gave way, in the end, to a realization that it was Destiny that, when all was said and done, determined the course of events; and therefore--as the Hebrew Prophets had recognized--the First Things shall be the Last Things.

The record of events dictated by Enki thus becomes a foundation for Prophecy, and the Past becomes the Future.

Synopsis of the Second Tablet

Alalu’s flight in a nuclear-armed spacecraft

He sets his course to Ki, the seventh planet (Earth)

Why he expects to find gold on Earth

The appearance of Nibiru from outer space

The Celestial Battle and Tiamat’s breakup

Earth, half of Tiamat, inherits her waters and gold

Nibiru is destined to forever orbit the Sun

Alalu’s arrival and landing on Earth

"The story is compelling, drawing readers into the world of extraterrestrials, gods, and ancient events in a way that seems a combination of reading that daily paper and indulging in popular fiction. Reading The Lost Book of Enki is a truly unique, intellectual, and pleasurable experience to recommend to customers looking for something a little different."

"This book is another brilliant example of Sitchin's scholarship. I found it exciting reading, and give it my highest recommendation. The Lost Book of Enki . . . has an impact that will generate discussions all over the globe."

"...this is really one interesting book....a very intriguing topic."

"An epic tale of gods and men . . . challenging every assumption we hold about our past and future."